The Meteorites of Summer

Summer 2014 is just about gone. I did not do any meteorite hunting yet this year. Astrophotography has been taking up most of my out of town time. But, I might try really hard to get one trip in to hunt in the fall if I can tear myself away from the scope and camera. 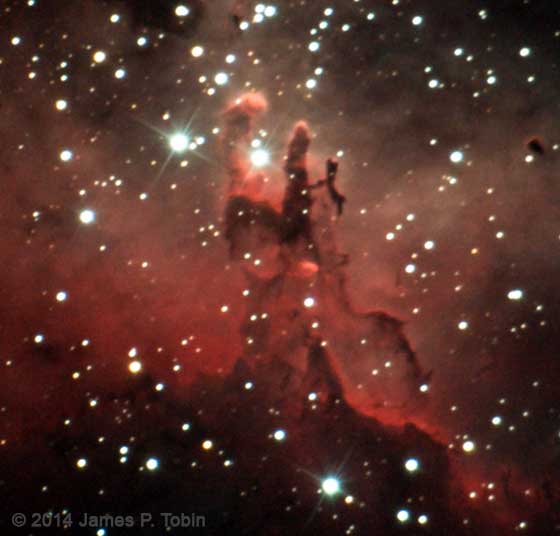 But, even though I did not get any hunting in this has been a great year for meteorites. I have cut enough to make another big bag of dust. I have organized what I have to still cut. Organization not being one of my strongest suits that is saying something. Each individual stone in its own box. Wow.

I almost never cut any stones that are very beautiful on the outside. They are usually ugly broken jagged chunks with little fusion crust left. Or they are round lumps of rock best described by the term “space potato” with little going for them in appearance. But, as the old saying goes about judging books by their covers, never judge a meteorite from its old broken or worn later stage of terrestrialization. Each one is both a challenge and a opportunity. And this spring and summer have presented some great examples of both. 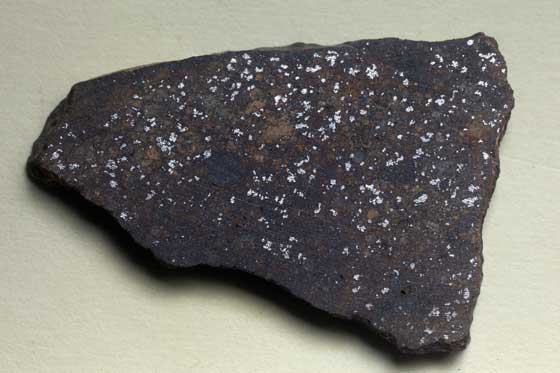 Most of the really attractive stones just get a window lapped onto them or at most a single clean up cut and then a lap. This does not give the same opportunity to see as much of the insides as cutting off many slices. I really like it when I find something truly interesting and can see it in several slices. Starting small and growing and then diminishing back to small again. It is like what happens in a CAT scan. I get a little glimpse into the way the extra large chondrule or inclusion was situated in the stone.

Some stones are so oddly shaped that getting them lined up in a good way to cut them with the least waste and the fewest resets can take some time and effort. Some stones have cracks and you know before you start that it is likely that the stone will fall apart when the cracks are reached by the blade. So standing there ever vigilant for the moment when a chunk falls loose or worse shifts position makes cutting interesting. I had a few of those this summer.

Last week I cleaned iron meteorites for half a day. I can see the bottom of the box on those now after a few years. I doubt that there will be many more of that location coming along. I have really enjoyed having them to work on but that is the way of this business and hobby. We have a meteorite location for a while and then the supply is absorbed into the collections of the world. Then we offer another to bring more wonder and fascination to collectors.

I cut into a few stones thus far this year that were ugly on the outside and extra wonderful inside. Most notably I guess is NWA 8384 which was not attractive in any way and had very little fusion crust left. But, when I made the first cut and saw all the tight packed pristine chondrules it suddenly became one of those days that instantly goes stellar. I cut a couple more slices and took one to the lap and smoothed it up. Washed this slice off in 99.9% alcohol and went inside to take some images to send to UCLA. I had two slices and a chunk in FedEx the next morning to get classified. This stone went from a formless chunk of unclassified meteorite to “wonderful best hope” for fulfilling my goal of getting a beautiful type 3 classified. And it did all that in about two minutes of saw time. 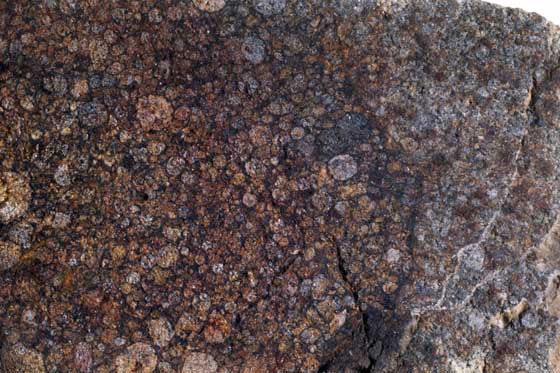 NWA 8384 as it became designated did turn out to be a LL3. That was another happy day for me when I got the email of the classification. But, I cut into some other very nice stones in the last few months. One that has not been classified and that I began calling “metal rich black” was another nondescript, nothing special stone until the endpiece fell free after the first cut. The outside was smooth and there was no remaining fusion crust. There was no visible metal on the outside showing as shiny spots. Nothing to hint that inside it would be so rich in metal. The matrix was black with some chondrules but the metal was fantastic. After cutting a batch of slices I gave it a date number code to keep track of what was cut and what was not. Its another great meteorite to enhance collections around the world.

Just as you are thinking that you know what to expect with a particular meteorite you will cut a slice that has something that is totally unexpected. I have many times looked at a slice I have just made and seen a strange metal inclusion or a large seemingly out of place chondrule. Meteorites are always full of surprises. I think that is part of what brings me back to the saw and keeps the work still fresh after several decades. Sometimes I have the time to photograph the unusual things, but often I do not. The slices get smoothed and maybe polished and then go off to be sold. In the end I am really never more than one of the many pairs of hands that a specimen will pass through in its hopefully very long time in collections.

Things have really changed over the years. There was a time in the past when you just did not see very many pallasites for sale and you never saw them etched. I used to do quite a bit of etching and I occasionally still do. But, the work done today is just remarkable by the specialists in meteorite etching. They etch pallasites and mesosiderites, as well as irons now. I remember a number a years ago when I saw for the first time an etched slice of Mundribilla. I was just thrilled and thought to myself I have to etch one for myself or buy a nicely etched slice. You know that remains one of the specimens I have not gotten; it is still on the list. I did etch a few small Gibeon meteorites during the summer. I had a large batch to clean and as I was working my way through the pile I picked out a few that were nearly perfectly flat on one side. With really little work and almost no loss of material I smoothed those sides into mirror polished faces. Then the big decision. Do I use nitol or ferric chloride? I have used both but for the last decade or so I have found myself gravitating to ferric chloride. You have to watch it and stop at the right moment and I find it works a little faster than nitol. I get less of the staining and dullness that can happen with nitric acid. A high perfect polish is the most important thing with it. I did those pieces and who knows it may be another few years before I do any etching again. 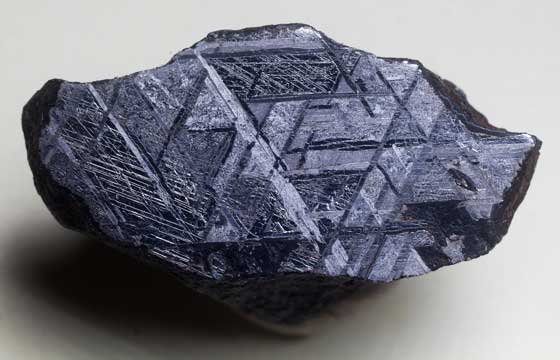 There never seems to be any lack of work for either Paul or I with the meteorite part of our lives. Writing, cutting, polishing, imaging for me and plenty of imaging, packing, website maintenance and customer relations for him. But, we both still find it interesting and fun and that is what keeps us at it. Far more important than the work are the friends we have made. So summer is ending and we are still waiting for Tucson to come around again so that we can connect once more with all our too seldom seen friends.

We get out with our scopes and cameras a little more often then we do with our magnets and metal detectors. But, I would guess there is a meteorite hunting trip out there in our future too. And who knows when a wanderer from space might come down and we would be packing stuff and jumping on the road to look for a piece or two.

The Meteorite Exchange, Inc. was born in 1996 with meteorite.com and Meteorite Times Magazine in 2002. Still enthusiastic about meteorites and all things related to them, we hunt, collect, cut and prepare specimens. We travel to gem shows and enjoy meteorites as much now as in the beginning. Please feel free to share any comments you have on this or any of our other sites.
PrevNovato – Collision History Revealed in California Rock
Juvinas: An Easily Distinguished Commune ContributionNext