The long anticipated paper by Peter Jenniskens and The Novato Meteorite Consortium has finally been published.

The meteorite that fell onto the roof of Lisa Webber’s house in Novato, California, on Oct. 17, 2012, has revealed a detailed picture of its origin and tumultuous journey through space and Earth’s atmosphere. Peter Jenniskens led an international consortium of fifty researchers that studied the recovered meteorite and published their findings in the August issue of the journal Meteoritics and Planetary Science.

Peter Jenniskens, who is a meteor astronomer and is the principal investigator for the consortium study, works for the SETI Institute, Mountain View, California at NASA’s Ames Research Center in Moffett Field, California. He recently announced, “Our investigation has revealed a long history that dates to when the moon formed from the Earth after a giant impact.”

The fall of the Novato meteorite was monitored by Peter Jenniskens’ astronomical surveillance network, CAMS (Cameras for Allsky Meteor Surveillance), which gave researchers something of a guess about where the object may have came down. The early reports that it was somewhere near Martinez, were unfounded. But days later, after hearing on the news that a meteorite fell (and remembering hearing a noise on the roof that same night), Novato resident Lisa Webber reported that she had recovered a rock that must have fallen on her roof. That stone turned out to be the first of the (currently 6) meteorite fragments to be recovered (and the reason these objects are now called the Novato meteorite).

Over the next several weeks, five more stones, most of them are just a couple of centimeters across, turned up within a few kilometers of Lisa Webber’s home – – a story that is retold on the CAMS website. These rocks revealed the evidence that allowed the scientists to piece together what they call “the space rock’s tumultuous journey.”

Qing-zhu Yin, professor in the Department of Earth and Planetary Sciences at the University of California – Davis, said, “We determined that the meteorite likely got its black appearance from massive impact shocks causing a collisional resetting event 4.472 billion years ago, roughly 64-126 million years after the formation of the solar system,” and added, “We now suspect that the moon-forming impact may have scattered debris all over the inner solar system and hit the parent body of the Novato meteorite.”

Jenniskens successfully measured the Novato approach orbit and confirmed that the Gefion asteroid family in the middle of the main asteroid belt can be the source of the meteorites.

Kees Welten, a cosmochemist at UC Berkeley, said, “Novato broke from one of the Gefion family asteroids nine million years ago.”

Kunihiko Nishiizumi, a cosmochemist also of UC Berkeley, added, “But the rock that was to become Novato, may have been buried in a larger object until about one million years ago.”

Derek Sears, a meteoriticist working for the Bay Area Environmental Research Institute in Sonoma, California, at Ames said, “We can tell the rock was heated, but the cause of the heating is unclear. It seems that Novato was hit again.”

The researchers have collaborated to produce this scenario of violent episodes dating back nearly 4.5 billion years and ending on Oct. 17, 2012, when the bolide broke up and fell on and around the Marin County suburb of Novato:

Researchers were surprised to find that all these impacts did not completely destroy the organic compounds in this meteorite. Qinghao Wu and Richard Zare of Stanford University in California measured a rich array of polycyclic aromatic hydrocarbon compounds – complex, carbon-rich molecules that are both widespread and abundant throughout the universe.

Jenniskens says that, “The quick recovery of the Novato meteorites made these studies possible.”

The research was supported by the NASA Near Earth Object Observation, Planetary Astronomy and Cosmochemistry programs, and the Swiss National Science Foundation.

The following is the Abstract and the Table of Contents as published in: The fragmentation of the Novato meteorite on Oct. 17, 2012, as depicted in a
horizontally mirrored image to show the progression of the event (from left to right).
(Credit: Robert P. Moreno Jr., Jim Albers and Peter Jenniskens/NASA-SETI)

Fall, Recovery, and Characterization of the Novato L6 Chondrite Breccia

30) Institute of Astronomy of the Russian Academy of Sciences (INASAN), Moscow 119017, Russia

Abstract – The Novato L6 chondrite fragmental breccia fell in California on 17 October 2012, and was recovered after the Cameras for Allsky Meteor Surveillance (CAMS) project determined the meteor’s trajectory between 95 and 46 km altitude. The final fragmentation from  42 to 22 km altitude was exceptionally well documented by digital photographs. The first sample was recovered before rain hit the area. First results from a consortium study of the meteorite’s characterization, cosmogenic and radiogenic nuclides, origin, and conditions of the fall are presented. Some meteorites did not retain fusion crust and show evidence of spallation. Before entry, the meteoroid was 35 ± 5 cm in diameter (mass 80 ± 35 kg) with a cosmic-ray exposure age of 9 ± 1 Ma, if it had a one-stage exposure history. A two-stage exposure history is more likely, with lower shielding in the last few Ma. Thermoluminescence data suggest a collision event within the last ~0.1 Ma.  Novato probably belonged to the class of shocked L chondrites that have a common shock age of 470 Ma, based on the U,Th-He age of 420 ± 220 Ma. The measured orbits of Novato, Jesenice, and Innisfree are consistent with a proposed origin of these shocked L chondrites in the Gefion asteroid family, perhaps directly via the 5:2 mean-motion resonance with Jupiter. Novato experienced a stronger compaction than did other L6 chondrites of
shock-stage S4 Despite this, a freshly broken surface shows a wide range of organic compounds. 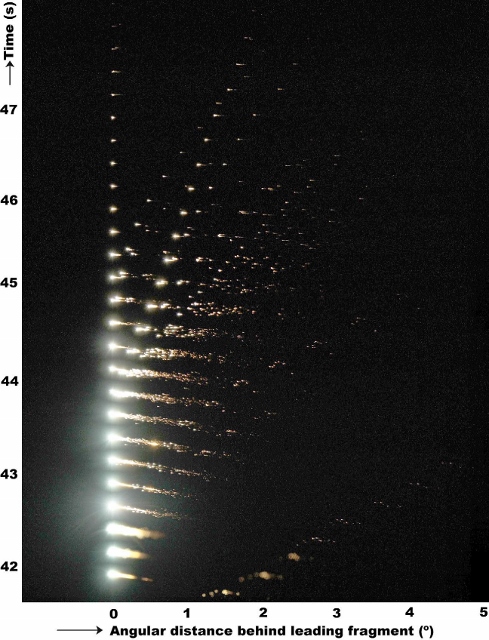 The fragmentation of the Novato meteorite on Oct. 17, 2012, as depicted
in a horizontally mirrored image to show the progression of the event (from left to right).
(Robert P. Moreno Jr., Jim Albers and Peter Jenniskens/NASA-SETI)

CONDITIONS OF THE FALL AND PRE-ATMOSPHERIC ORBIT

THE METEOROID IN SPACE

Fig. 11. Trajectory solutions derived from different combinations of cameras … and the station locations…

Fig. 12. Observed minus calculated values for azimuth and elevation of the meteor in all video frames…

Fig. 13. Novato fireball visual brightness as seen from a distance of 100 km, and the approximate deceleration profile.

Fig. 15. Fragmentation and relative deceleration at the end of the trajectory in a compilation of digital photographs…

Fig. 17. Stereoplot of major axis orientations of all individual metal grains in two different stones of the Novato fall.

Table 4. Abundances of major, minor, and trace elements in the Novato L6 chondrite.

Table 5a. Summary of oxygen isotope values for Novato.

Table 5b. Summary of chromium isotope values for Novato, compared with mean values from other meteorites.

Table 6a. Novato trajectory from all Cameras for Allsky Meteor Surveillance (CAMS)…

Table 8b. Concentrations of U, Th, and K … measured by nondestructive gamma-ray spectroscopy.

Table 10. Thermoluminescence data for the light and dark lithologies of the Novato meteorite…

Table 12. Summary of the amino acid analysis from methanol spray sampling for light and dark lithologies of Novato N01-2a.

Table 14a. Overview of other known L chondrite falls …

Table 14b. The calculated dynamical lifetime for meteoroids…

This may be the most thoroughly studied L6-chondrite fall.

In closing, I would like to invite anyone who has an interest, and is in the San Diego area, to this years installment of The Meteorite & Tektite Party which has had a long tradition here in Southern California. It will be held on September 14th. It was a lot of fun last year (where the main entertainment became an impromptu show & tell of meteorites), and I’m looking forward to seeing everyones latest acquistions this year.

This small fete will, again, be held at the same venue as last year, as well as, where my 65th Birthday Party was held two years ago, and is where I got the idea to resurrect the old Annual Tektite Party (hosted by Paul Harris and Jim Tobin) that I used to attend 10 years ago in Torrance, California.

This year the “Meteorite & Tektite Party”, again, is an open event to anyone that will be “in the San Diego area” or is willing to travel down the Interstates to San Marcos, California. The credit for actually organizing and running this event goes to my better-half, Monika Waiblinger. She suggested that we have another Party on her Facebook Group called the “California Meteorite Club“. We have confirmation from people who live in Silicon Valley and Los Angeles that they will be attending the Party this year.

Moni will be setting up tables for meteorite displays, since it seemed that everyone brought a meteorite with them last year. There’s a rumor that there will be a birthday cake this year for Boumdeid (2011). There will be some discussion about having a “slab exchange” (trade specimens), or a “silent auction”, or even giving talks and presentations at next years Meteorite Party.

Hope that you get this invitation in time and can make it. See you there.

For a “copy” of the published paper | click on REPRINT on the “Nature – International Weekly Journal of Science” website.

Bob is a retired aerospace engineer living in Southern California, and has been recovering meteorites from the Southwest U.S. Deserts since 1995.
PrevSelma H4
The Meteorites of SummerNext