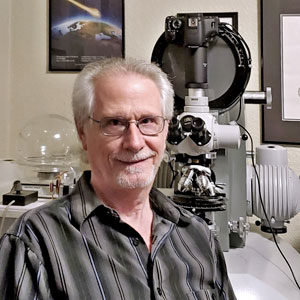 Steve Brittenham became interested in the physical sciences at an early age, wreaking havoc at home by constantly disassembling household items to see how they worked (but much to his parents’ chagrin, only occasionally putting them back together again). The prototypical “geek”, he entered several science fairs and was selected as a Westinghouse Science Talent Search national finalist for his work on ionic cooling. Steve attended UC Berkeley during the counter-culture heydays, but since nerdy engineering students were exiled to a remote corner of the campus, he was able to focus on a B.S. degree in electrical engineering and computer science. While his emphasis was on bioelectronics, life has a wicked sense of humor and Steve ended up instead employed at Hewlett Packard for 36 years doing signal processing and system architecture work on disk, optical, and tape drives. For fun, he’d analyze meteorites in HP’s material sciences lab and from that was able to contribute to a paper with UCLA and the University of Singapore describing the NWA 6693 achondrite meteorite. Later, noted thin section photographer Tom Phillips convinced Steve to buy a surplus ex-NASA Zeiss Ultraphot III microscope. After three hours manually positioning the microscope to individually acquire 354 images for his first full slide stitch, Steve got lazy and automated its stage and camera to generate hands-free multi-gigapixel stitches, now taking only about thirty minutes. His meteorite collection exceeds five hundred in number, which he selects from to augment various talks and displays he often gives to promote meteoritics as a hobby.

A few months back I was asked to help with an appraisal of a 14.6 pound stone meteorite that had been in a family’s collection...