Another book on Meteor Crater

I finished a two-year long project a few days ago. It is a new book and it is about Meteor Crater again. Yes I know I am in a rut. But I am not going to talk much about the book itself.

What I want to tell you this month is the story of the writing of the book. It is clear to most regular readers of this article that over the years I have returned to some topic related to Meteor Crater often. I recognize that I have a passion for its history and the crater as a whole. I have a few meteorites at this point, and most types are well covered in my collection, but there is an over abundance of materials from Meteor Crater. It was the first place I hunted meteorites, impactites and anything else that looked like it suffered through the crater’s formation. I was about fifteen years old, and we took a Saturday off from building the house in Bullhead City, Arizona. My parents surprised me by taking me to Meteor Crater. We got there at 1 pm I would guess and went through the museum, looked at the crater and climbed all the steps outside. Then they asked me whether I wanted to go down into the crater or around it. There was time to do only one. I said, “Go around.” We started at the side door of the museum building the same place that the tours start from today. Those hourly tours that run out along the north rim as far as the ruins of the original stone museum building.

About as soon as I got to the northwest “corner” of the crater, I began seeing rocks that looked like they had been melted in the impact, but I did not know for sure. We hiked through the west boulder field. I remember we stayed up high just a few yards down from the crater edge most of the way. When we got to the south side, I saw a dead steer and foot prints my folks recognized to be from a mountain lion. I was not as afraid probably as I should have been, but it clearly disturbed my parents. I was too far off in meteorite heaven to worry about that as we continued on. I did not even know back then about the buildings on the south slope or the silica mine or the final shaft and the concrete foundations. So I did not even think to walk out to those sites. 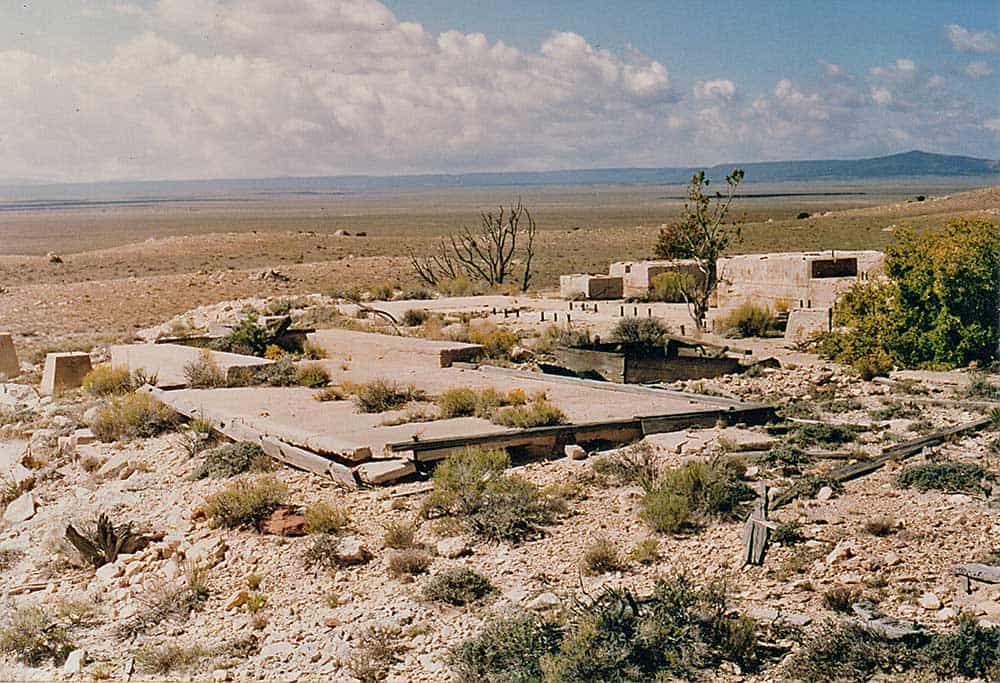 To give you a little more information about my childhood. My parents had taken my brother and me to every ghost town in southern California, Nevada and western Arizona to dig bottles and look for artifacts starting when I was about eight years old. I had been on plenty of rockhounding and fossil hunting trips too. But more often it was digging in the old dumps of ghost towns. So now you know why I was walking at Meteor Crater with my head down looking at anything interesting. It was a well-developed skill by the time I was fifteen. And this was Meteor Crater. I had already been sending pieces of basalt to H. H. Nininger to see if they were meteorites. I did not own any meteorites yet and did not really have a good idea what they would look like in my hand, but I had read Nininger’s book on Meteor Crater and also Our Stone-Pelted Planet. I was really ready to find a meteorite. They were the only titles of his books available at my local library. Later as an adult, I would get a copy of Our Stone-Pelted Planet that he had autographed. That remains a really special book to me. We made our way around the whole crater. It takes a while if you are meandering as I was examining everything you see. My father took just a few pictures that day, and I have them now. As excited as I was I was still a teenager having to pose for pictures, so I did not smile. I wish now that I had for it was one of the happiest days of my childhood.

My real collection of meteorites began several years later with a Canyon Diablo being one of the first pieces. I have returned to Meteor Crater many times after that first trip. In fact, everytime I have traveled down I-40 I have tried to stop for a visit. When I wrote my first little folded and stapled booklet on the crater I stayed in the RV park for a few days and went to the crater usually twice a day. I also hiked down to the Nininger Museum ruin. You could still go there in those days. And still always with my eye to the ground I found a few things. Some pieces of iron shale and three small actual meteorite fragments. I like to imagine that they came off some nice big space rock that Harvey was working on there by the side of the building. Still in the place where I found them all those years later. It is a bit far from the crater to find iron shale and small meteorites sitting on the surface of the disturbed ground, (really the road around the side of the building) so I think my vision probably holds a lot of truth as to the trio of meteorites’ reason for being there. The eight pieces of iron shale from Nininger’s ruin are shown below. 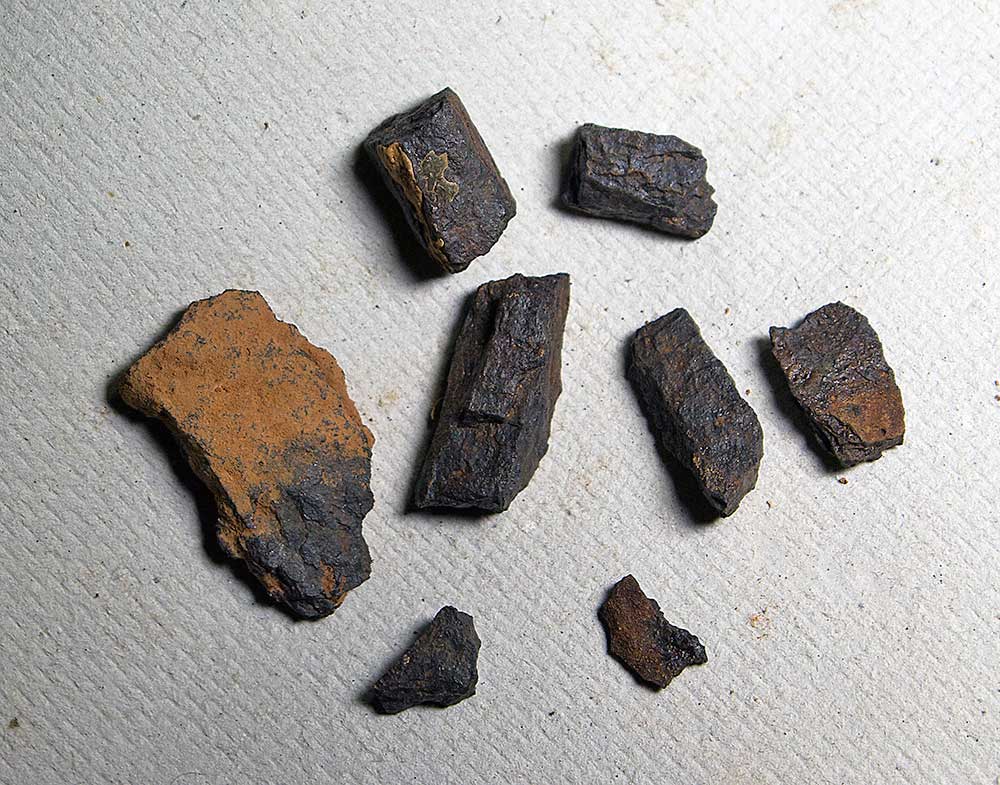 Below is one of the Canyon Diablo meteorites in my collection now. It is a specimen gotten a few years ago at the Tucson Gem and Mineral show. It weighs 173 grams is lightly cleaned and has a wonderful shape. 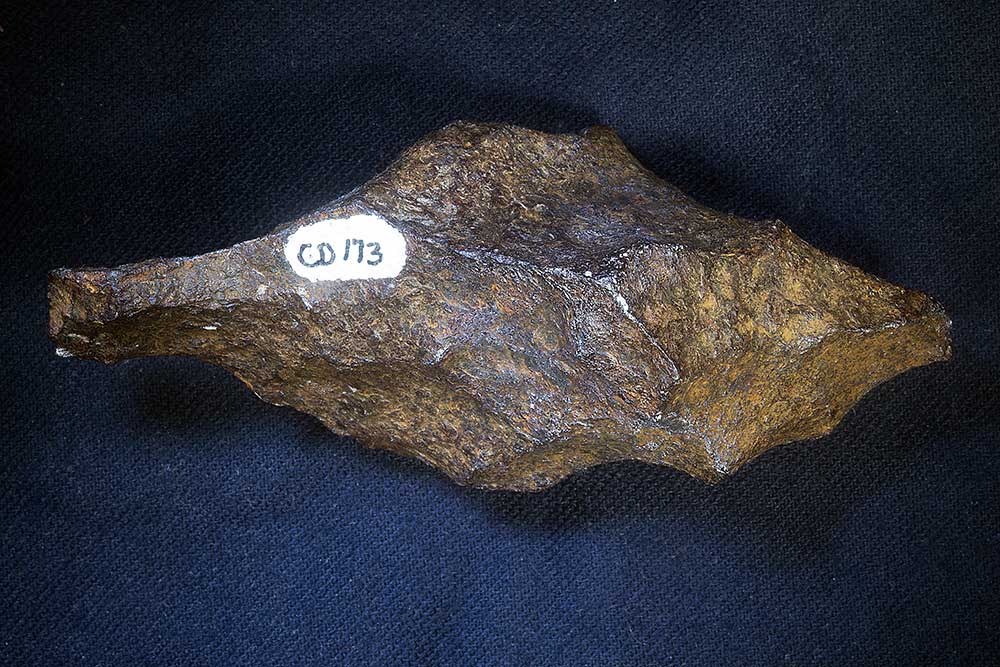 It was February 2014, and I was with Paul Harris at the Tucson Gem and Mineral show, and we were in the showroom of friends as the conversation turned to a collection of documents from a long time ago relating to work at Meteor Crater. Well, you can guess that my heart skipped a beat or two as we talked. But it was not the right time yet. 2015 came around, and the conversation again went to the documents only now there was real interest in loaning them to me for enough time to scan them and archive them with buffering sheets and make them safe for the decades to come. And there was real interest in having me write the story the documents contained. I did not really know what that story was except that it related to the period of the drilling on the south rim in 1920.

Several tries during 2015 to get the documents did not work out so it was at the Gem show in 2016 that I finally threw all my clothes into a box and shipped them home on the last day of the show so there would be room for the documents in my carryon. I got home and began to scan the pages and quickly saw that this was real treasure I was looking at. One of the first documents that I scanned was a letter several pages long typed in blue ink on Daniel Moreau Barringer letterhead and signed by him personally. There were other letters from him and notes and pencil sketches. Other famous individuals had documents in the collection. Professor Magie, Dean of Princeton, Elihu Thomson inventor and President of MIT and the list went on. I was in historian heaven. It never gets any better for the historical writer than to work from the original documents of the characters in a story.

The day to day activities of a project at Meteor Crater that has never gotten much more than a few lines of a single paragraph was there for me to immerse myself in and develop into a book. It has been the better part of two years, and the book is now done. The story includes the hardships of the drillers working at the isolated mining camp on the south slope of Meteor Crater, but there were many other stories too. A dozen things that had to be prepared before drilling began is a part of the story. The digging of the tunnel into the crater wall so the drill hole could be cleared of the lost under reamer bit is another part of the drama. The names of the participants in the drilling had been lost to history. The men have been bad-mouthed for nearly a hundred years because of the failures and the costs. But there was much more to it than that. And the criticism they have received even without their actual names being mentioned was largely uncalled for. It was complicated as most things are, and it cannot be condensed into a couple lines of harsh comments and blame without sacrificing a considerable amount of truth.

So I had months of fun. I was learning and writing the story of the first year of the drilling program on Meteor Crater’s south slope from May of 1920 through the end of April 1921. The work continued with a different superintendent until November of 1923. But the documents I was blessed to share contained the story of L. F. S. Holland and the men who worked with him, the first men to try and drill for a buried star.

My book is entitled Drilling for Meteorites and will be available soon. I plan to have copies around the Tucson Gem and Mineral show this year, and it will be available online too of course. This was the hardest writing project of my life, but also the most exciting and I hope the most important work thus far.

The Meteorite Exchange, Inc. was born in 1996 with meteorite.com and Meteorite Times Magazine in 2002. Still enthusiastic about meteorites and all things related to them, we hunt, collect, cut and prepare specimens. We travel to gem shows and enjoy meteorites as much now as in the beginning. Please feel free to share any comments you have on this or any of our other sites.
PrevBob Hoover – 1938-2017
Siena, Italy: The Meteorite That Started It All?Next