Siena, Italy: The Meteorite That Started It All? 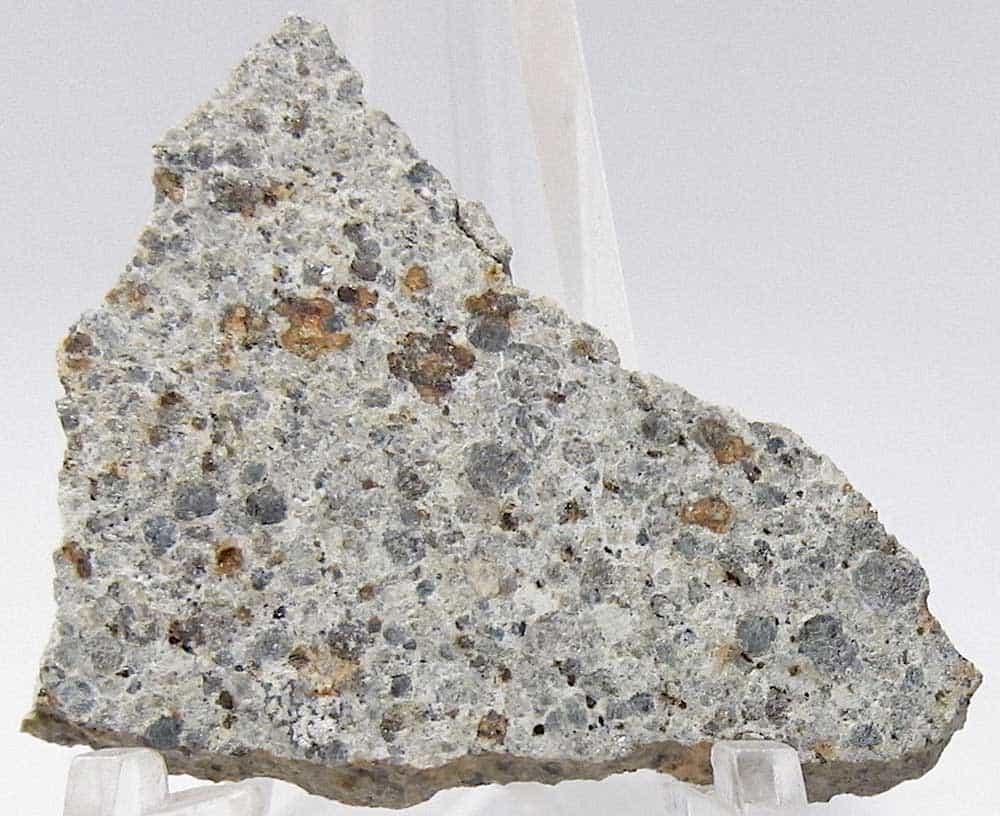 The famous and well respected Ursula B. Marvin penned an opinion tome in the September 1995 issue of Meteoritics suggesting that the Siena meteorite fall of 1794 is “History’s Most Consequential Meteorite Fall.”

No matter how you slice it, it’s a tall order for a meteorite to be the Most Consequential. The abstract of Marvin’s article is as follows:

In the mythos of meteoritics, the fall of stones at L’Aigle in Normandy at 1 p. m. on April 26, 1803, is commonly regarded as the event that turned skeptics into believers and opened the way for the new science. A strong case can be made, however, that the fall of stones at Siena at 7:00 p.m. on June 16, 1794, established the authenticity of meteorite falls and set in motion the reexaminations of entrenched beliefs that led to the founding of the new science.

The Siena fall was heralded by the appearance of an extraordinarily high, dark cloud emitting smoke, sparks like rockets, and bolts of unusually slow-moving red lightning. With a tremendous explosion a shower of stones, ranging in weight from a few milligrams to 3 kg, fell southeast of Siena. This was the first meteorite fall to occur in the vicinity of a sizeable European city and the first to be witnessed by so many people, including English visitors, that the fall of the stones from the sky could not be denied. It also was the first fall to be seriously investigated by scholars, at several universities in Italy, who collected eye-witness reports and specimens and formulated hypotheses of origin. 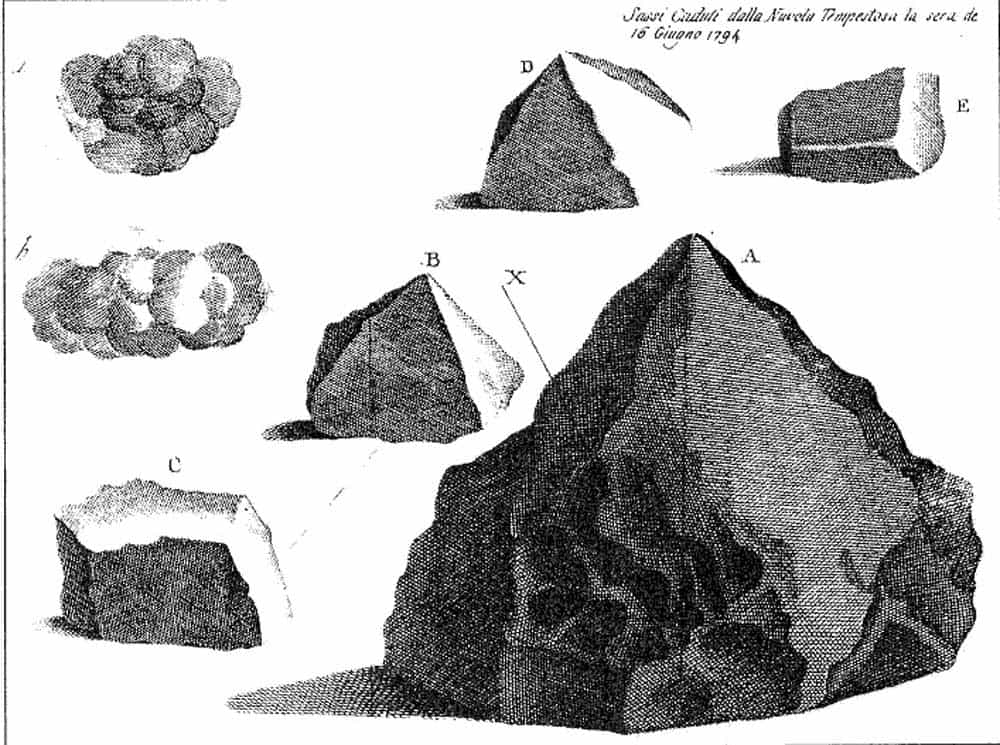 Their task was greatly complicated by the timing of the fall which occurred 18 hours after Mt. Vesuvius sprang into full eruption. Some believed that the two events were entirely coincidental; others thought that the stones either were ejecta from the volcano (which lay about 320 km to the southeast of Siena) or had consolidated in the fiery masses of dust and ash expelled by the mountain. No explanations seemed entirely satisfactory, but, in an age when the very possibility of falling stones had been decisively ruled out by savants of the Enlightenment, the well-observed fall at Siena opened a new dialog on this subject.

The Siena fall occurred only two months after the publication in Riga and Leipzig of Ernst F. F. Chladni’s book On the Origin of Ironmasses in which he concluded from historical records that fragments of iron and stone fall do, indeed, fall from sky. News traveled so slowly in the 18th century that Chladni’s book received negative reviews in Germany throughout 1794 and much of 1795 before the first notice of the Siena fall appeared in a Berlin paper in 1796. The same amount of time passed before Chladni’s book reached England, but the groundwork for a more tolerant reception of it in that country was laid by travelers returning from Italy in 1794 with their descriptions and their specimens from Siena (including bogus “fallen stones” fabricated for the tourist market).

Widespread interest was aroused in 1795 when the Royal Society published an account of the eruption of Mt. Vesuvius by Sir William Hamilton, the English Ambassador at Naples, who included a short discussion of the Siena stones and their possible link with the volcano. Hamilton’s article carried the story of the Siena fall to France and Germany. The case for fallen stones was further strengthened when a 56-pound stone fell at 3:30 p.m. on December 13th, 1795, at Wold Cottage in Yorkshire. Early in 1796, Edward King, a Fellow of the Royal Society, published the first book in English on fallen stones. In it, he focused primarily on the Siena event but just as he was finishing his text he received a copy of Chladni’s book and quoted from it extensively. King’s 36-page book was widely read. It received some bad reviews in England but it immediately prompted one reader to report the fall of a stone [apparently a genuine meteorite] at Pettiswood, Ireland. He had withheld his story for 17 years for fear of ridicule. Now, the climate of opinion had changed and meteoritics already was becoming a new branch of science. 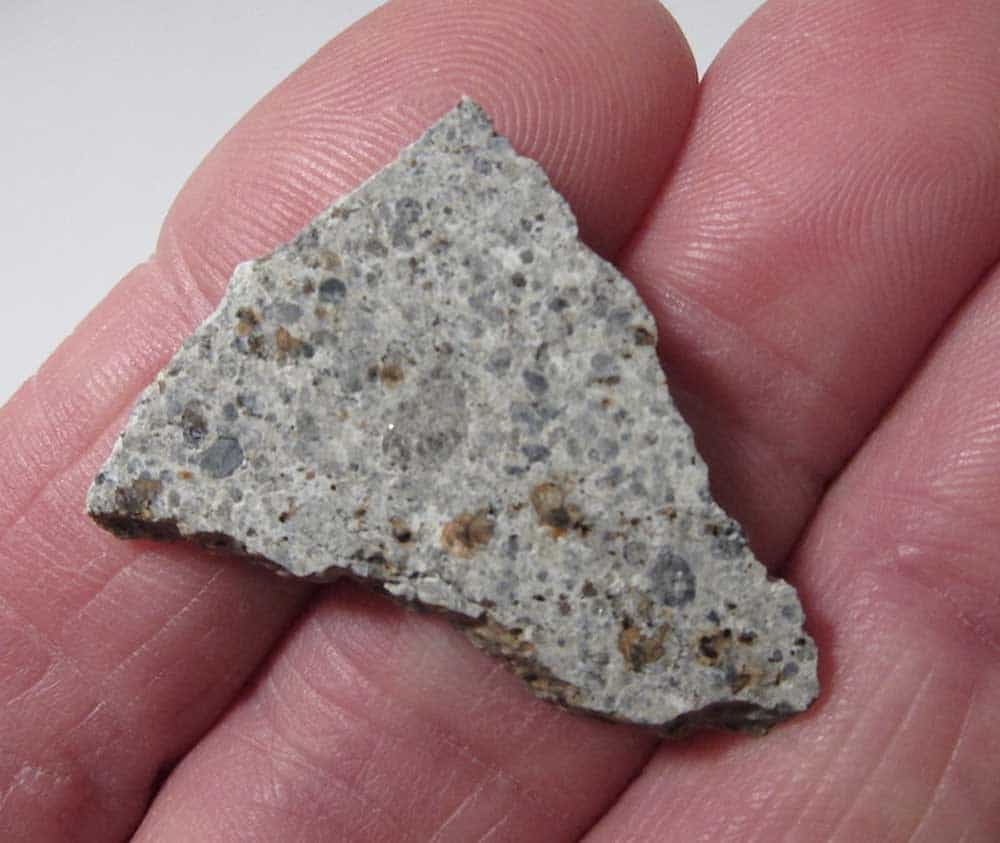 The “Most” of anything is always a point of contention by those deeply interested in the subject, and the more esoteric the topic, the more nuanced the argument. Marvin posits that the events surrounding the fall of L’Aigle that often places that French fall as a birth of sorts of modern meteoritics. However, the fame of L’Aigle is based upon many of the same fall characteristics that Siena possessed almost a decade earlier.

There is a theory that one only truly becomes a leader when the first follower appears. According to the First Follower idea…

The first follower is considered to be as important to the development of a movement as the initiator because they make the leader’s viewpoint seem more credible.

The first follower risks ridicule in the same way that the initiator does. Once a single person follows the initiative, however, it becomes less risky for others to join.

Anyone can run around trying to create change, but until others follow, the movement goes nowhere. But not until that first follower shows up will validity and acceptance go mainstream because although the idea is already out in public, it requires a second person to agree. So applying this logic to Siena and L’Aigle, its reasonable to project the notoriety of L’Aigle is due to the icebreaking leadership of the Siena fall.  In other words, Siena planted the seeds of change that L’Aigle, as the first follower, confirmed to a population ready to believe such things. 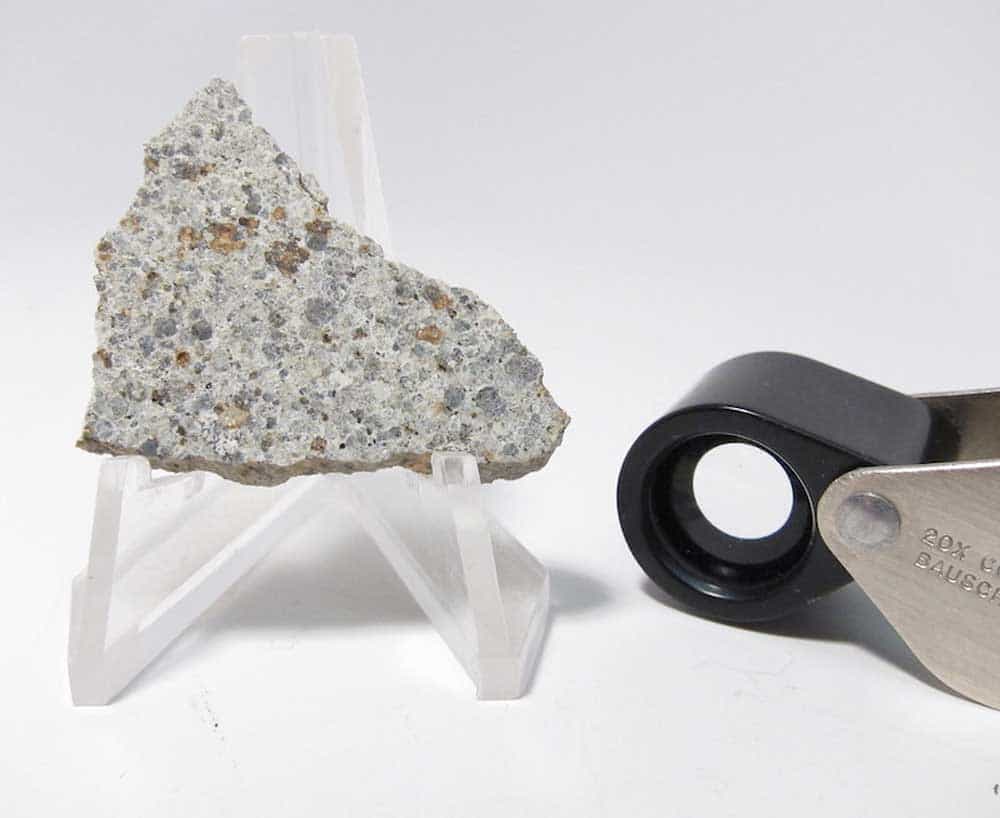 For those deeply concerned with the nuances of this line of thought, it’s perfectly reasonable to posit that the first follower might actually be the Wold Cottage meteorite fall in 1795. The application of a little social psychology might be needed in hindsight, but its obvious in the bigger picture that Wold Cottage applied doubting pressure on the scientific community at that time to at least attempt to defend their archaic and unproductive views about “aerolites” given the mounting evidence supporting a completely different conclusion. Throwing a blanket dismissal that stones can fall from the heavens was now going to take some real effort.

So when the undeniable event we know as the L’Aigle meteorite shower stressed traditional thought beyond the breaking point, the seeds of doubt from Siena were already germinating and allowed for a smoother scientific transition. In many ways, it might be more of a case of science once again discovering the obvious. Or worse, an “I told you so” moment.

And if anyone deserves to shout “I told you so” it would be E.F.F. Chladni, the famous German scientist who is credited with many consequential firsts of his own in the field we now call Meteoritics. In the pre-Google days of 1794, the same year as the Siena fall, Chladni was busy at work compiling all the available accounts of those odd objects we now call meteorites. And the rest, as they say, is history.

Building a personal collection of historic meteorites requires a representative of Siena. But its not as easy as it sounds. The distribution of Siena is extensive, but more through time than through availability. Siena is an LL5 chondrite with a listed total known weight of a mere 3.7 kilograms or exactly one-tenth of the TKW of L’Aigle.

The largest specimen of Siena in my collection was acquired through the assistance of Russ Kempton and New England Meteoritical Services. It is a minor slice of some 3.2 grams or 1/1000th of the total known weight. 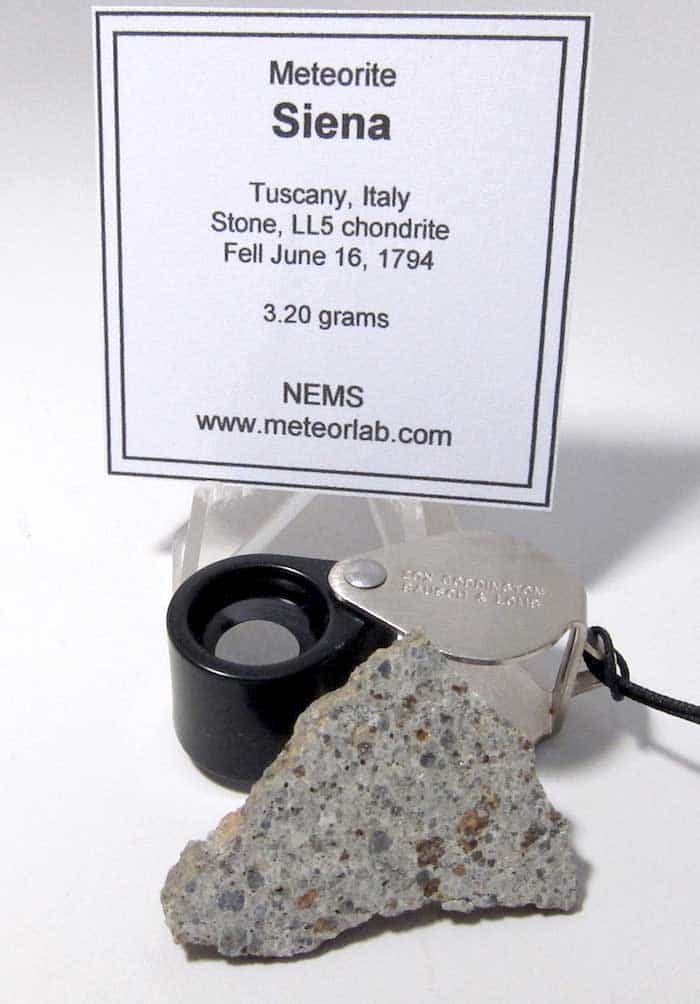 So as the calendar pages run out yet again, it follows that all our historic meteorites are one year older. Even more, some formerly contemporary meteorite falls transition into the undefined realm of historical. Perhaps if a century is old enough for a meteorite fall to become historic, then falls from 1917 are now historic. And one 1917 witnessed fall near and dear to my heart is Independence, Missouri , a graceful stone that I’ve highlighted a few times before namely Here and Revisited Here.

Dr. Martin Horejsi is a Professor of Instructional Technology and Science Education at The University of Montana, Missoula. A long-time meteorite collector and writer, before publishing his column "The Accretion Desk" in The Meteorite Times, he contributed often and wrote the column "From The Strewnfields" in Meteorite Magazine. Horejsi is also the Lead Technology Reviewer for The National Science Teaching Association, and just celebrated his 22th year working with NASA and the JPL in education and public outreach (EPO), and is a NASA Solar System Ambassador. Horejsi specializes in the collection and study of historic witnessed fall meteorites with the older, smaller, and rarer the better. Although his meteorite collection once numbered over a thousand pieces with near that many different locations, several large trades and sales and trades have streamlined the collection to about 250 important locations with all but 10 being witnessed falls. Many of the significant specimens in Horejsi's collection are historic witnessed falls that once occupied prominence in the meteorite collections of Robert A. Haag, James Schwade, and Michael Farmer. Other important specimens were acquired through institutional trades including those from The Smithsonian Institution, Arizona State University, and other universities. Horejsi was awarded the Harvey (Nininger) Award in Tucson in 2006, The Brotherhood of Guardians of the Ensisheim Meteorite in 2011, a JPL Inspiration Person, on the JPL STARDUST Team that was awarded the Smithsonian Air and Space Museum Annual Trophy in 2008, and former board member of the International Meteorite Collectors Association, and the Northwest Council for Computers in Education.
PrevAnother book on Meteor Crater
Ravar H4 MeteoriteNext