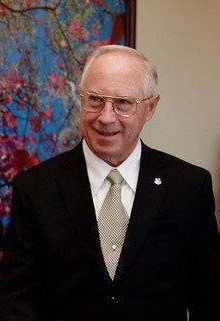 Commemorating the life of my friend and of our fellow meteorite-hunting colleague.The recent passing of Robert Hoover has prompted me to postpone this month’s article, and instead to make notice of this sad news.

Robert Dan Hoover, Born in Corona, CA on January 25, 1938 passed peacefully while in hospice care near his home in Yucca Valley, CA on November 6, 2017. He was a loving husband and father. He spent his life in the aviation industry as a pilot with several different airlines. He always had a passion for flying. He started his career in the United States Air Force at 17 as an aircraft mechanic. He worked as a flight instructor, and as an airline pilot until he retired in 1999 at the age of 61. During his varied career he flew numerous aircraft including sea planes to Catalina island. In his spare time he enjoyed shooting and was an avid gun collector, he also enjoyed tinkering with and working on his cars. Later in life he found an interest in meteorites and meteorite hunting. His first meteorite hunt was the “99th Anniversary Holbrook Hunt” in 2011.[1] He continued to go out and hunt at other Arizona strewn-fields, for example, Franconia and Buck Mountains. He also searched for meteorites in areas of Southern California such as, Danby dry lake, and Stewart Valley, as well as, other numerous Nevada dry lakes. His biggest find was a 32 gram Holbrook stone that he found in 2014.[2] His favorite thing to do was to go out to Safford AZ and hunt for Saffordites. He met many people in the Meteorite-community and enjoyed the company of each and every one. 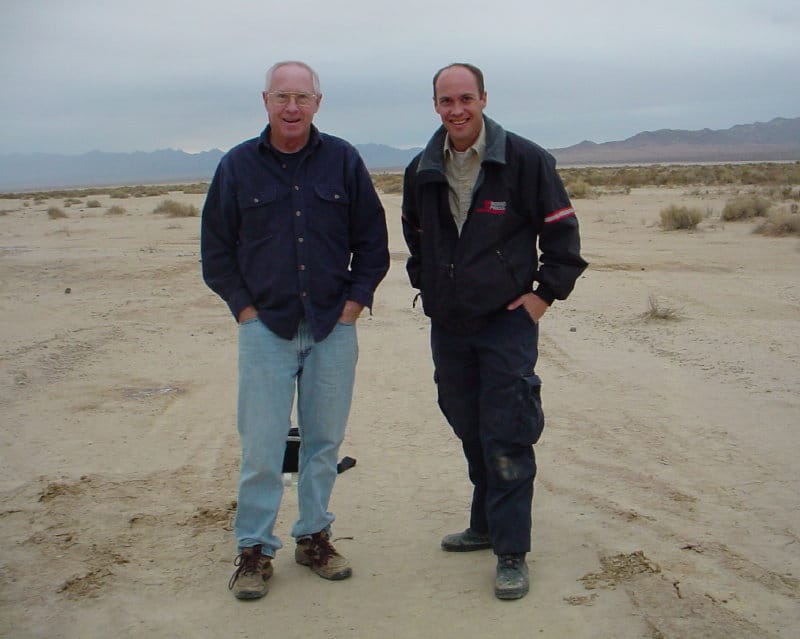 The late Bob Hoover in the field with his eldest son, Robby Hoover (image taken by the author) 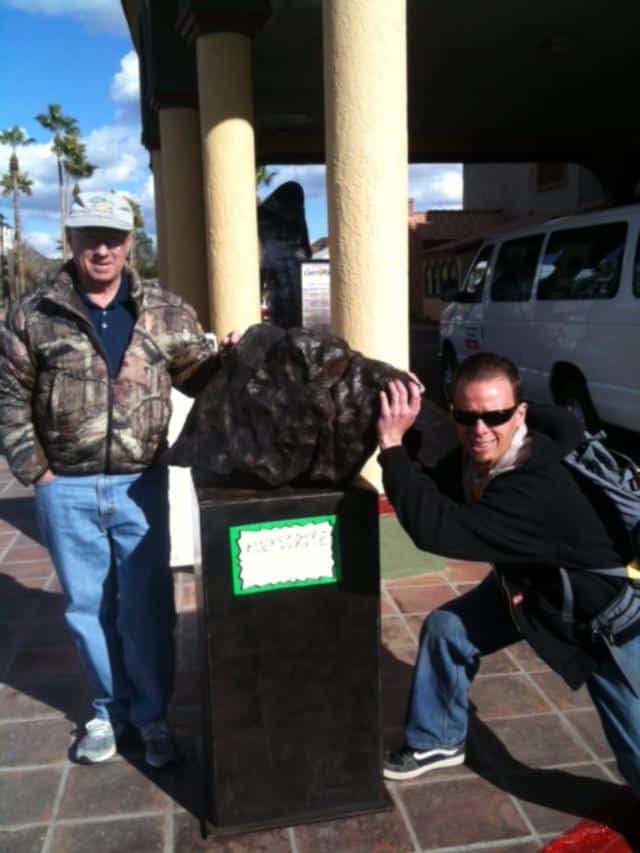 Bob Hoover posing with Michael Mulgrew (with a large meteorite which they have mistakenly thought to be their “cold find”;-) at the front entrance to the (then) Inn Suites at the Tucson Show (image taken by Robby Hoover, 2012?) 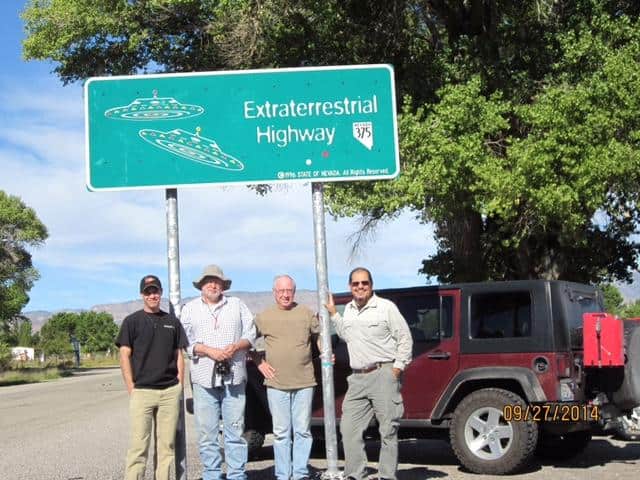 A bunch of Californians in Neveda on the road between Alamo Mountain to Ely and Yelland Valley. [3] From left to right: Robby Hoover, Jim Tobin, the late Bob Hoover, and Richard Garcia (image taken by James Tobin, 2014) 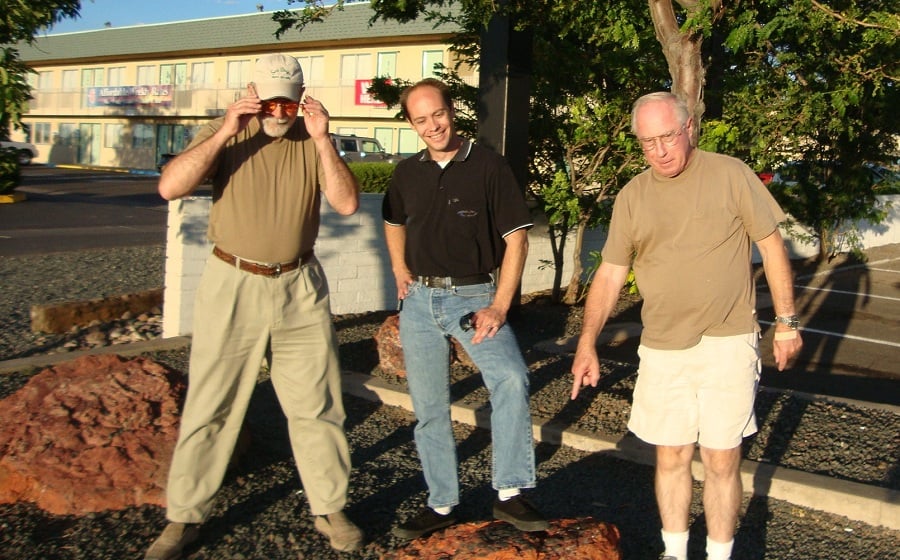 A jovial Bob Hoover at his first meteorite-hunt — the 99th Anniversary of the Holbrook AZ Fall. From left to right: the author (Bob Verish), Robby Hoover, and his father Bob Hoover (image taken by Monika Waiblinger, 2011) 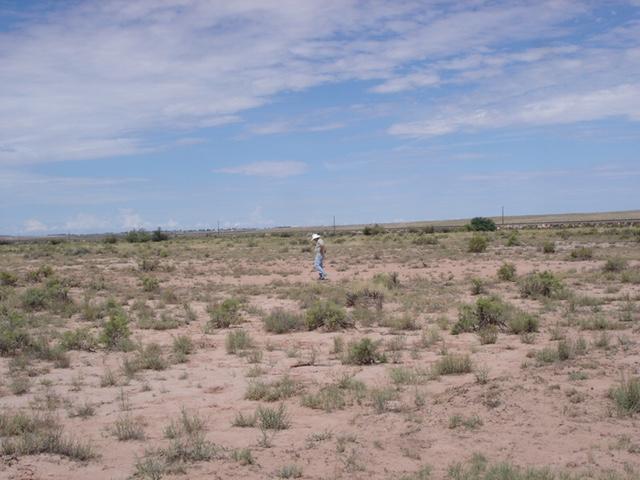 Bob Hoover, at Holbrook, a meteorite-hunter who is outstanding in the field. (Image taken by Robby Hoover, 2011) 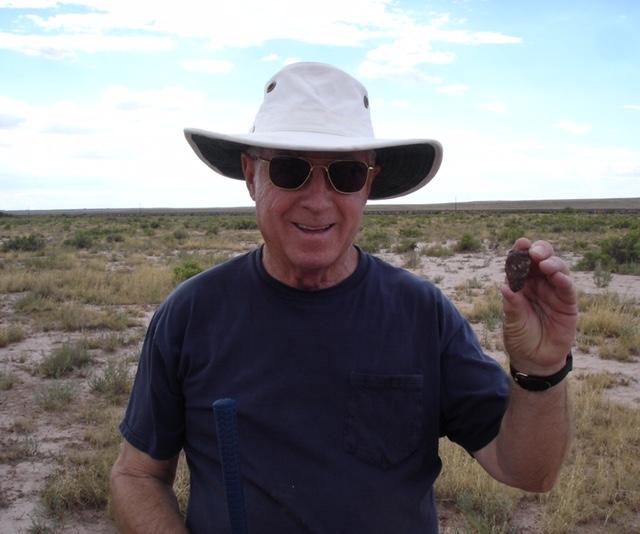 Bob Hoover posing with his first Holbrook meteorite find (and at 32grams, was his biggest find of his career) a whole-stone from the Holbrook Fall of 1912. (Image taken by Michael Mulgrew, 2014) 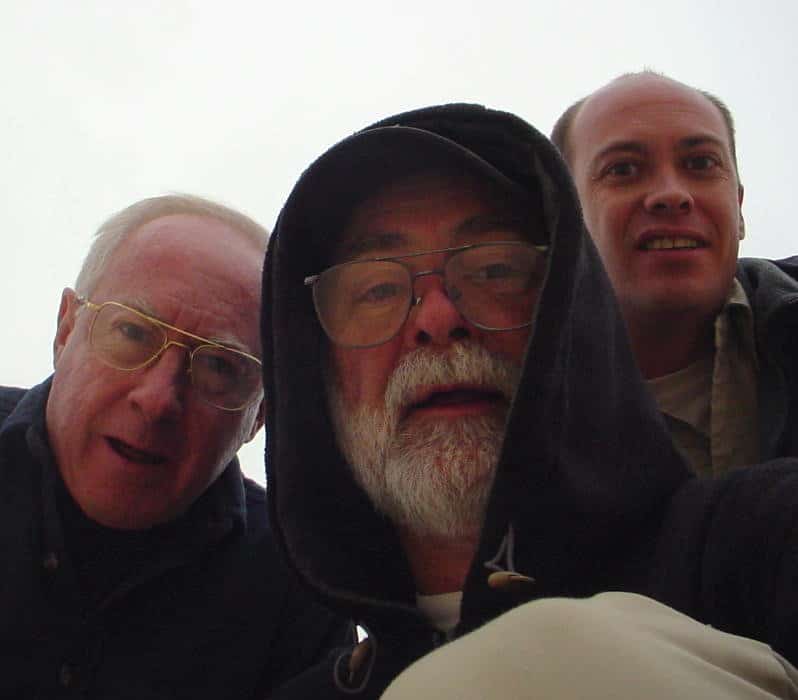 My favorite photo that I took of Bob Hoover. This photo was unstaged. While walking over to the trucks to reunite with Bob and Robby after a long day of searching for Danby Dry Lake meteorites, I made a find. I called them over, while I took some in-situ images. They peered over my shoulder to see what I found, and at that instant, I inadvertently took a reverse-camera view “selfie” image of the three of us. Essentially, if a meteorite could have eyes, it was a find’s-eye view of the finders. (image taken by the author, 2011) 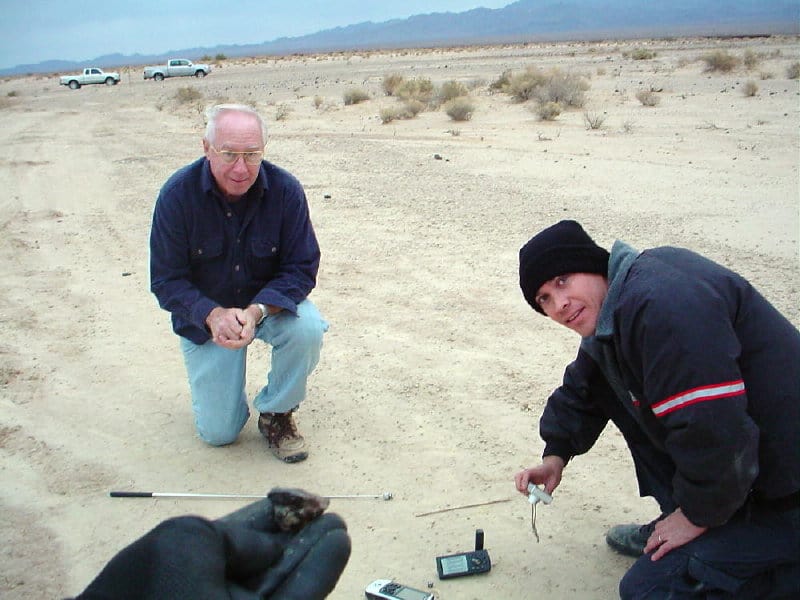 The late Bob Hoover in the field at Danby with his eldest son, Robby Hoover (image taken by the author, while I held my Danby Dry Lake find) 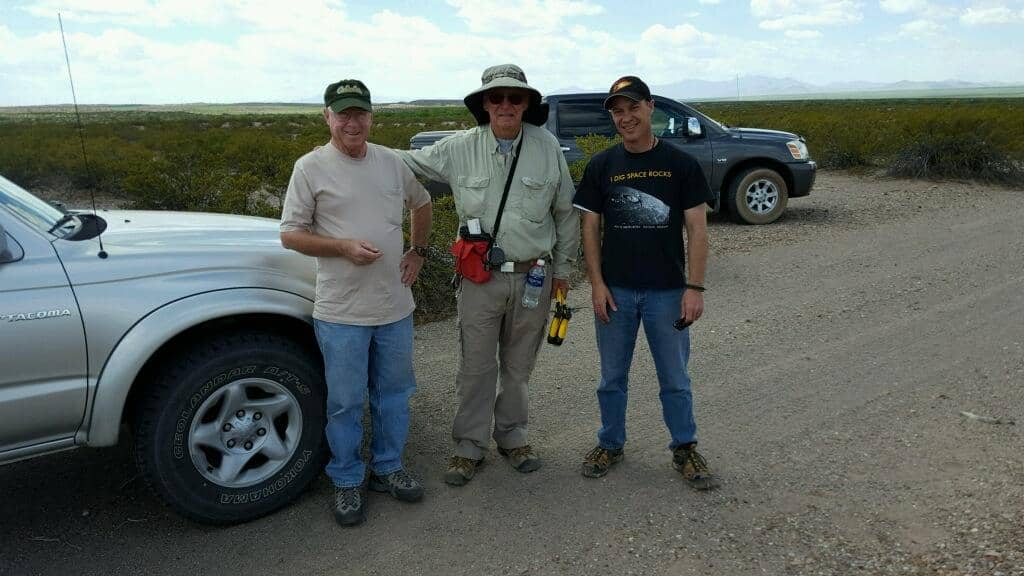 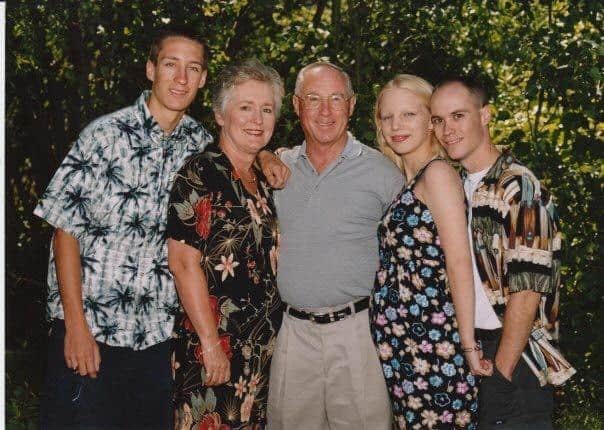 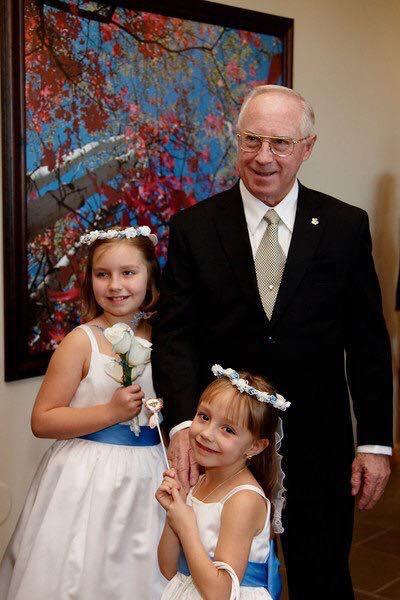 The proud grandfather with his grandchildren, Madison and Hailey Hoover. (Undated image.) 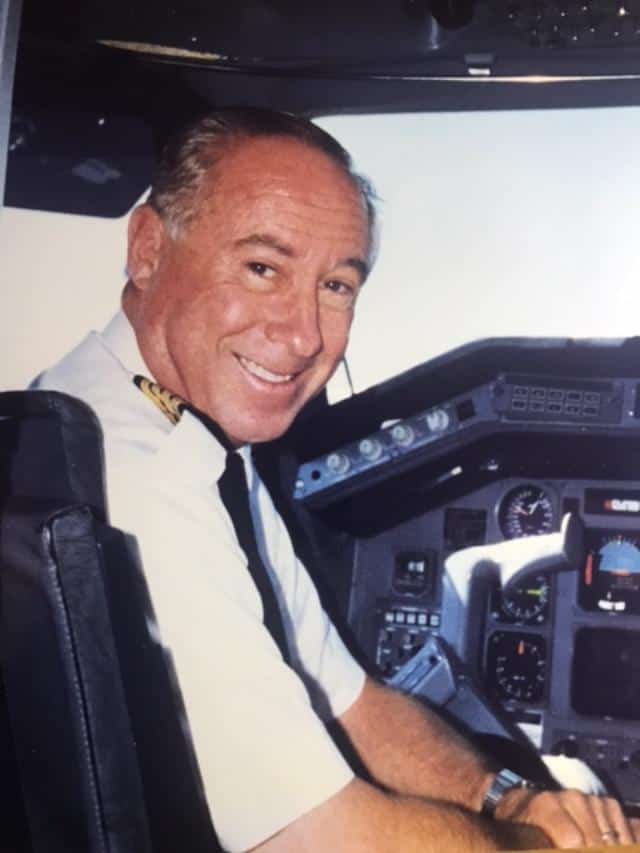 Bob Hoover when he was a pilot for Skywest Airlines. I have no doubt that he is now piloting the skies of Heaven. (Undated image.)

As of this writing, there are no details, but there are plans to have a 15 minute service at Riverside National Cemetery no later than 1:30PM on Monday, December 4th.

This article has been highly abbreviated in time for it to be included in this November publication of Meteorite-Times Magazine.

The next edition of Bob’s Findings will be the next Volume of the Newsletter for Unclassified USA Meteorites.

Major Increase in TKW for Danby Dry Lake the reference that prompted the revision to the above MBD entry — the 70-fold increase in TKW (and proof that it was a breccia) was of primary importance, and not the stated “revised coordinates”!

Bob is a retired aerospace engineer living in Southern California, and has been recovering meteorites from the Southwest U.S. Deserts since 1995.
PrevMukundpura CM2
Another book on Meteor CraterNext