Another Tucson Gem and Mineral Show is in the history book. What an exciting trip it was for Paul and I. We took an extra day this year and it made a big difference in the way the week went. It was a little more relaxed and we had a chance to find a few more great items that we might otherwise have missed.

We got into town about 1 pm on Wednesday and headed straight away to find meteorites at a secret location off the beaten path that we hit each year.. We found the meteorites and some great Moldavite too. In less than one hour, two of the items on our “really want list” were checked off. We stopped briefly at the former Inn Suites and saw some people. Then it was off to the hotel to check in and get some lunch. The night was likely to run late with the screening of Meteorite Men top of the list of places to be. So having had our hotel room given away once many years ago we try to check in before night time activities.

Back on the road about mid afternoon we were back looking at meteorites around town. I had a short list of items I was personally looking for. Of course there are always many other meteorites to see that I find interesting. Almahata Sitta the meteorite fall that had been tracked from space to the ground a few months ago was one I really wanted to check out. Anne Black had delightful pieces in her room of this unique meteorite. Not only is it the only meteorite that was a tracked asteroid before breaking up in our atmosphere and spreading itself across the ground. But it turned out to be an unusual type. Polymict Ureilites are about as rare as ones tracked before falling.

Anne Black and Geoff Notkin have shared a room at the show for the last few years and while there one of our early visits Geoff generously presented Paul and I with Aerolite Meteorite ball caps. This will be a treasured memento which I will also wear with pride. There was a tremendous variety and beautiful presentation of meteorites in their room. It is just a great place to hang around. For very soon any one you are looking to find will appear. I think by the end of the week I had only failed to see one or two people on my “people list”.

I had been looking for Nerft one of only four meteorites from Latvia for a few years. I knew that Moritz had some last year that I  had missed And there it was in Mike Farmer’s roomthis year. So after getting it I am just one meteorite away from completing Latvia. We had some fun getting a 1 kilo of small Gaos from Mike. Nothing beats sitting on a comfortable couch and picking through bags of meteorites. It is not as much fun now to go home and have to clean them up a little. After 50 years they are showing a rusty color on the surface. But, it mostly disappears with some tooth brushing.

I have had a “probably never get” list with a few meteorites on it. Chassigny was top of that list. But,. I found some this year and it is now part of my collection. Who would have guessed. To be honest though; the fragment is certainly the smallest in my collection as well.

I have several individuals and slices of Allende. When I saw the one I got this year in Erich Haiderer’s room it was love at first sight. I think it is maybe the most CAI rich slice per square inch I have ever seen. We were showing what we had bought to Paul’s brother Tony and he said one of the Calcium Aluminum Inclusions looked like a ghost. I think he is right.

I had a good year with finding oriented irons. I have slowed down buying them. I just get a couple each year. I found two very nice Sikhote Alins and two great Taza individuals. One of the SAs Paul named the Rat Poop meteorite and that name will stick I think

The two Taza meteorites I got from Bruno and Carine. While there they let me take a couple pictures of some other special items they had. The Fukang full slice was spectacular. The crater in the Sikhote Alin is quite remarkable as well.

The first morning is always when we stop by Blaine Reed’s room and we did not deviate from tradition this year. I found a couple pieces there, but the fun is always getting to talk to him and hear his opinions on the meteorite world. One of the other rooms at his hotel had some stones last year and I got a couple. This year we swung by there to see if he had any meteorites again. Well he did. He had the same three stones I had left behind last year. Two that were very questionable as being real and one that I had not gotten in ‘09. So you know the next part. I got it this year. Now he just has the two interesting maybe or maybe not stones. I guess I can look at them again next year.

The business had bought a big batch of stuff and we needed to send it home. A stop by a shipping booth got that big load of iron and stone off our minds. We don’t like to leave anything in the rental car so it gets tough to carry everything with us.

Wednesday night was the screening of another episode of the Meteorite Men Science Channel series. It was great to gather together as a large group of meteorite enthusiasts and watch it together. The commercial breaks were certainly more fun then at home with Geoff and Steve entertaining us during those times of advertisements. Having arrived just that afternoon it was also the first occasion to see many of our friends. What a wonderful evening of fun.

In fact every evening of the trip this year had some event for us to attend. Thursday was the IMCA dinner. The Meteorite Exchange had never attended before. We had gone out for dinner as a small group of friend in years past. I think we will enjoy many more IMCA dinners in the future. It was also a nice opportunity to make new friends and reconnect with friends we had not seen in a while. On Friday night the Birthday Bash for Geoff and Steve brought around another chance to have Pizza. The fire dancers were a hit I think. 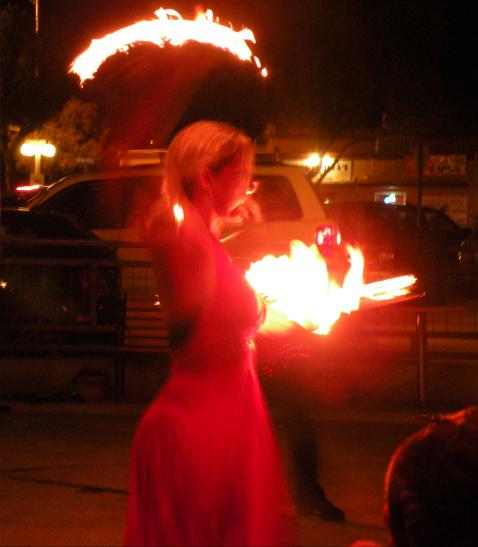 This year’s Harvey Awards were given out to a very deserving group of recipients. And Geoff favored the crowd with some songs after the regular program ended. A spectacular evening as always.

Saturday night is Michael Blood’s Meteorite Auction. Unfortunately I can not comment on it. For the first time ever I missed it. I understand from the things I have read that it finished up early and went off well. We had an absentee bid in and won the item. So Paul and I were happy to hear that. We spent a very wonderful evening out to dinner with two members of Paul’s family who had driven over from Phoenix. Sorry to say this Michael, but I don’t think either of us missed going to the auction. We were having so much fun, laughing, tell and hearing stories that it was actually 45 minutes after the Outback closed before we noticed we were the only people there (and that they were cleaning up). We had left a nice tip, but it was really nice of them to not throw us out.

Sunday morning there was really only time to make a fast pass through the Inn Suites to say some goodbyes and settle up some bills. I needed to pay Anne Black for several pieces. Then it was off to the Airport by way of a gas station. $5 a gallon if we don’t fill the tank. I actually got turned around and messed up a couple times driving this trip. Maybe once a year is not enough time to spend in Tucson. Especially with so many friend living there now.

We found what we had wanted to get for the business, we saw almost everyone we hoped to see. We met many new people we had only known from emailing. I found some nice pieces for my collection. As Tucson Gem and Mineral Shows go this may have been the best so far.

The Meteorite Exchange, Inc. was born in 1996 with meteorite.com and Meteorite Times Magazine in 2002. Still enthusiastic about meteorites and all things related to them, we hunt, collect, cut and prepare specimens. We travel to gem shows and enjoy meteorites as much now as in the beginning. Please feel free to share any comments you have on this or any of our other sites.
PrevThe Arizona Meteorite Exhibition (2010)
Witnessed Fall: Alfianello, ItalyNext