Zhamanshin crater is a 13.5 km diameter circular meteorite impact structure located about 40 km southwest of the village of Irghiz, Kazakhstan. Approximately one million years in age, the locality is best known for its Irghizites, beautiful little droplets and ropy ribbons of vitreous jet-black glass.

Showing clear evidence of aerodynamic flight-shaping, Irghizites have long tested the definitional boundaries between tektites and non-tektites. Currently, most authorities do not consider them to be tektites. An oft-cited difference is that Irghizite-like impactites are found only in the immediate vicinity of the associated impact crater, while tektites are typically found no closer than a few hundred kilometers from the apparent region of impact or recognized crater of origin (and the outer limit for known tektite strewn fields is about 2000 km).

There is an added twist to the discussion offered by the discovery of Atacamaites a few years ago. These are extremely similar to Irghizites in morphology and size distribution. The problem is that they do not appear to be associated with a crater. As far as I know, there is a very extensive strewn field in an arid desert environment with excellent exposure, but no crater yet reported. (This diminishes the value of impactite ejecta distribution patterns relative to their crater of origin as a definitional criterion!)

But that is a different subject. Back to Zhamanshin. There are a variety of impact glasses found in the Zhamanshin crater despite over 50 meters of post-impact crater fill. Four types are commonly recognized: Irghizites, Silica-rich Zhamanshinites, blue Zhamanshinites (with colors ranging to turquoise!), and Silica-poor Zhamanshinites. These are found as blocky glass “bombs” in fall-back breccias consisting mostly of local country rocks.

This month’s teaser is a large endcut of a cobble of Zhamanshinite impactite —-with a surprise. The specimen is a fragment of what was once a plump glass pillow about 30 cm (1 foot in diameter. This piece seems to represent a quarter to a third of a projected original cross-sectional area.

The piece is a little larger than an open hand and consists mostly of a fragile, coarsely vesiculated glass foam (some reports say similar materials have been shown to be pure lechatelierite indicating temperatures of formation over 1700 degrees C).

We purchased this peculiar stone at the Tucson show, but I didn’t try to decipher the story until recently. In preparing for this article, I reviewed the publications that I had access to regarding the varieties of Zhamanshin glass and varieties of glassy impactites in general. Nowhere could I find descriptions of anything quite like this. I reviewed our personal impactite collection and our business inventory. I was reminded that Wabar glass often has a pumiceous white foam core, which is similar, albeit at quite a different scale. The thought that this might be a unique type of impactite began to tease across my mind.

That is was a glass “bomb” recovered from surface deposits is indicated by a ropy glazed skin on the external surface of the thick glass rind. This enamel is decorated with small lichen colonies. Lichenation patterns also suggest that the broken face of this specimen parted along an existing fracture.

The heart of the story centers on the glassy froth that forms the core of the specimen. It is similar to a densely vesiculated volcanic scoria but the vesicle walls are exceeding thin and fragile. The specimen must be handled with care to avoid crushing the foam with one’s fingertips. Detached fragments are very light in weight and will readily float on water.

It is not uncommon for glass impactite bombs to consist of a shell of glass coating some foreign object (i.e., a bedrock clast). But in this piece, the glass appears to be derived from the collapse and welding of the surface of the foam. Imagine playing a torch over a block of styrofoam until a skin of plastic accumulates. In this specimen, the laminated glass rind is 3 to 5 cm thick, and given the very low density of the foam, the rind must represent many times its thickness in consumed foam.

So, the story includes a ballistic block of low-density silicate foam probably over a meter in diameter, that welded and collapsed into a 30 cm diameter pillow. What of this foam? This dense vesiculation implies sudden pressure release while yet at a very high temperature. Where is such a condition found in a cratering event?

Computer models indicate that at the moment of impact a compressive shock wave propagates both into the target and back through the impactor. When this shock wave reaches the rear of the projectile, a rarefaction tensional wave is reflected forward, allowing the unloaded extreme- temperature bolide to flash into melt and vapor. The rising fireball would vacuum target materials upwards.

I postulate that the block of foam that is the subject of this article was the product of rebound unloading of impact melt in the immediate vicinity of the impactor/target rock interface. It was drawn up into the incandescent fireball where the surface progressively welded and collapsed to form the laminated glassy rind. The impactite bomb fell to earth comingled with the ejecta from a crater 13.5 kilometers in diameter and still some 800 meters deep after a million years of infilling. I can imagine such fragile foam bombs to be proportionately rare indeed.

It remains one of life’s simple pleasures to read a good rock with a story to tell. 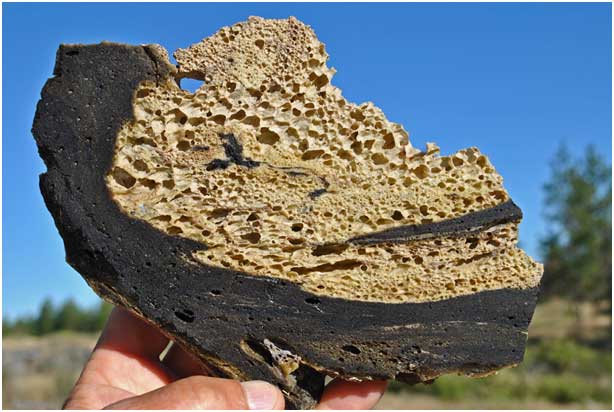 Norm Lehrman is a recently retired exploration geologist with over 45 years experience. His career involved fieldwork in over 35 countries on every continent except Antarctica. While stationed in Australia, Norm and his wife, Cookie, became interested in collecting Australites, which ultimately led to a generalized passion for tektites, impactites, meteorites and related materials. In 1999 they founded the Tektite Source business (www.TektiteSource.com) which has evolved into one of the world's premier providers of tektite and impactite specimens. Norm has retired to a ranch near Spokane, Washington, where they continue to serve tektite aficionados worldwide.
PrevSPACE ROCKS MAGAZINE
Tony Irving’s MartiansNext