What’s so Mysterious about Meteorites

What’s so Mysterious about Meteorites
By
O. Richard and Dorothy Norton 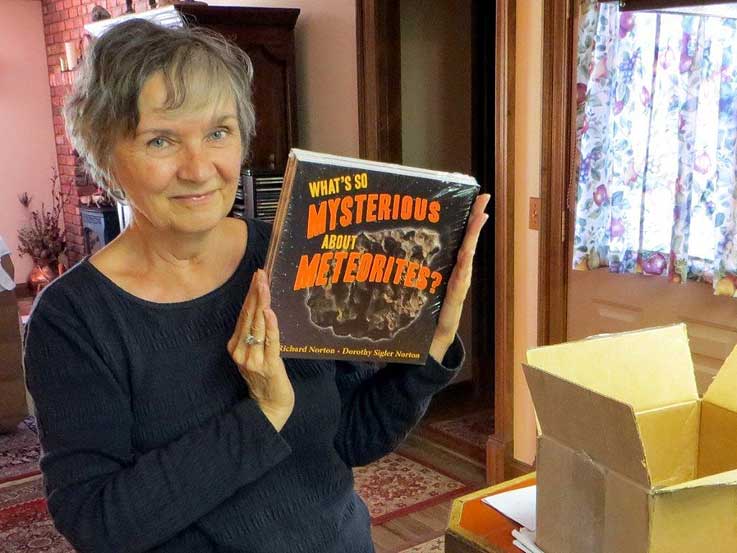 When Richard Norton went on to the great beyond three years ago, he left us with three books that we all know and love: “Rocks from Space”, “The Cambridge Encyclopedia of Meteorites” and the “Field Guide to Meteors and Meteorites” but there was one segment of the population that had been left out and as Dorothy tells us in the Introduction to “What’s so Mysterious about Meteorites” : “He had always wanted to provide a basic introduction to his beloved meteorites that could be read by young adults and anyone interested in the subject of rocks that fall from the sky”. And here it is, lovingly finished by Dorothy Norton – the perfect person to handle that work because she knew what Richard wanted to accomplish, and because she knows quite a lot about meteorites too.

This book is part of a new collection created by Mountain Press Publishing Company: “What’s so Cool about Geology?” with 2 titles already published: “What’s so great about Granite?” and “What’s so hot about Volcanoes”. The fact that this series of books is addressed primarily to young adults does not mean that Geology, and meteorites in this case, are simplified to the point of leaving a lot of important information out, it means that it is all there but written in a way that makes it accessible to all. 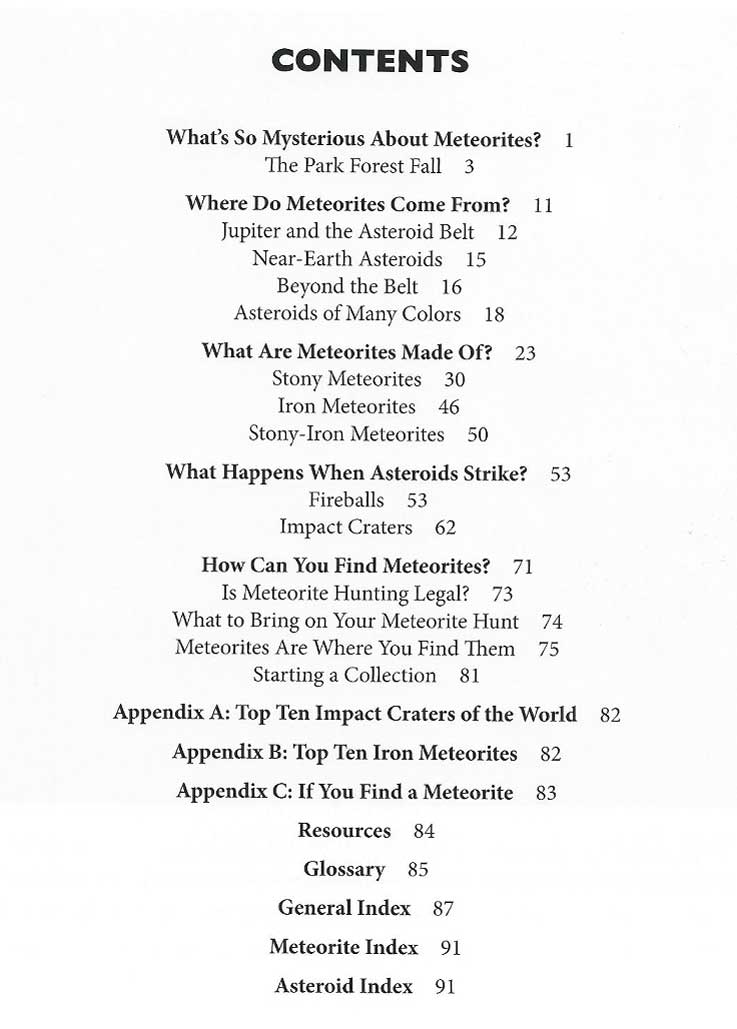 The book starts logically enough with some background: meteor showers and meteorites as told to children and to adults, and Chicken Little leads us naturally to the famous and well documented fall of Park Forest, where a child was one of the primary witnesses since a meteorite fragment fell in his bedroom. A thorough retelling of the fall, the pieces recovered and many pictures serves as a great and lively example to introduce the reader to the world of meteorites.

After this crashing introduction, the next chapter considers in greater details where meteorites come from. We are then introduced to the Asteroid Belt, the Near-Earth Asteroids and what happens beyond the Belt, with a side-trip to how Asteroids are named. (Yes, both Richard and Dorothy Norton have their own asteroid named in their honor). Then Richard and Dorothy take the time to explain the differences between the various asteroids and how those differences are reflected in the meteorites that we have in collections, allowing us to guess with a high degree of confidence where those meteorites came from. 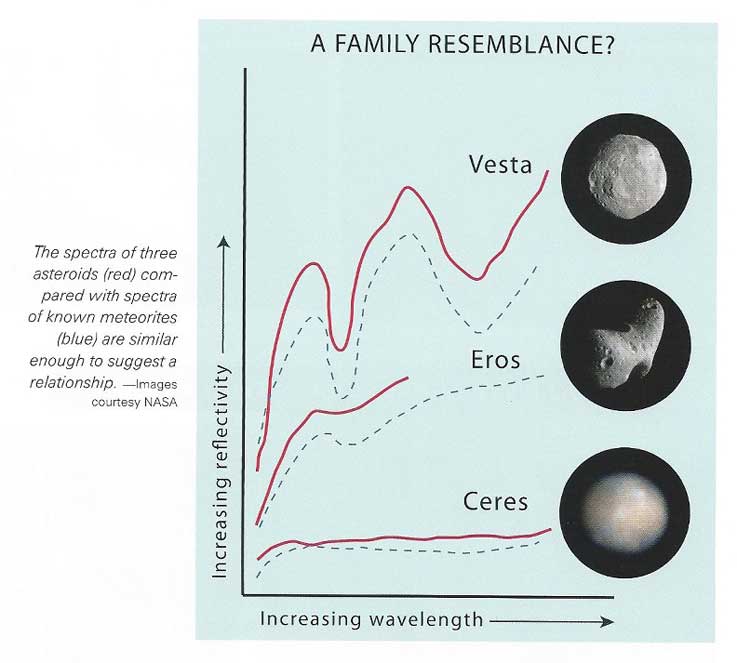 Now that the reader knows where they come from and that the spectra analysis hinted at differences between them we move naturally to a closer look at what meteorites are made of.

This chapter opens with a very clear explanation of how it probably all began, from a supernova, to clouds of dust, to the formation of the Sun and Planets, and how those masses, planets, stars, asteroids coalesced, got differentiated, and ended up looking very different and containing very different minerals, from iron to carbon. This whole chapter is abundantly illustrated with pictures of each of the various types of meteorites, seen whole and in a thin-section through a microscope. 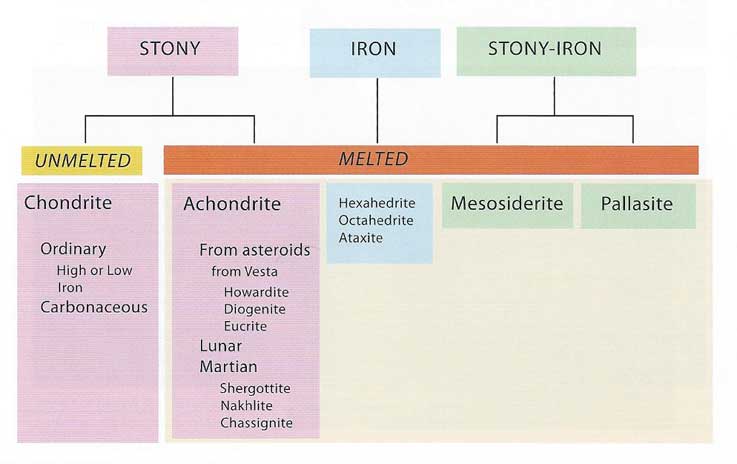 ALL THE DIFFERENT TYPES OF METEORITES

Even experienced meteorite collectors might find bits to add to their knowledge; I particularly like the three pictures showing the three main petrologic grades of stony, from 3 to 5; finally a clear way to see how chondrules practically melt away gradually from one grade to the next one. And there is an explanation on how water came to Earth within purple salt crystals. The various NASA missions to Vesta, the Moon and Mars are also described, showing their relevance to the study of meteorites; a couple pages are devoted to ALH84001, and to the meteorites found on Mars.

Iron and Stony-Iron meteorites are looked at next, from a funny picture of Tim Heitz on top of a huge Campo to other pictures showing the various crystallization patterns and how this was discovered.

One nice touch: Finally a good clear explanation on how it is possible to tell how long a meteorite has been in Space and on Earth. Another good tidbit for more advanced readers.

But it is not all serious science, the book is colorful and there are quite a few drawings to keep the younger readers amused and interested. And Dorothy Norton’s drawings are justifiably famous. 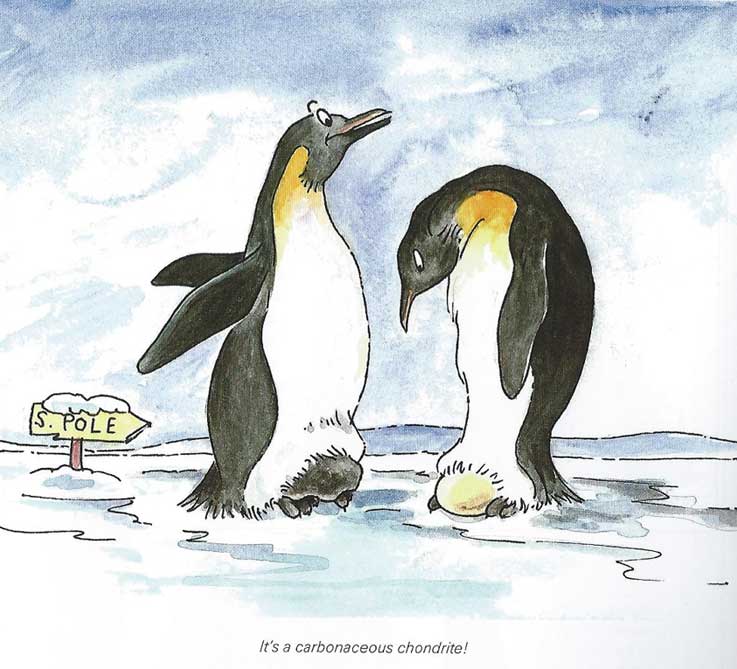 The book goes on to look at what happens when an Asteroid strikes the Earth. Richard and Dorothy explain why a fireball always lands much further than you think, and why it makes a difference which direction the asteroid comes from. Then several very good pictures help them explain what ablation, regmaglypts, flow lines and orientation is. There is even a checklist for the lucky witness to a fireball and I would guess that even seasoned observers would find it very helpful.

This is followed by a description and explanation of the other phenomenon related to meteorites, namely Impact Craters, Tektites and of course Chicxulub. And thank you Richard and Dorothy for reminding young, impressionable readers that no one has ever been killed by a meteorite.

Of course now that all has been said about meteorites, the next question to be answered is “Where are they?” And the explanation that follows would help young readers but it might also be a very good reminder to all meteorites hunters: where is it legal to hunt? What to take with you? There is even a checklist to help you get organized. And the chapter closes with pictures of the most common meteorwrongs, an excellent reminder.

Finally a few appendices will help the reader start a collection (Thank you for mentioning the IMCA!), and will give you some useful addresses if you do indeed find a meteorite. And the book closes with a list of Resources, a Glossary and an Index.

Thank you Dorothy for finishing Richard’s book, it will fill very nicely a great need, I am sure that many youngsters, and some not so young will appreciate it enormously.

(PS: The book is now available from Amazon, and a few of your favorite meteorite dealers.) 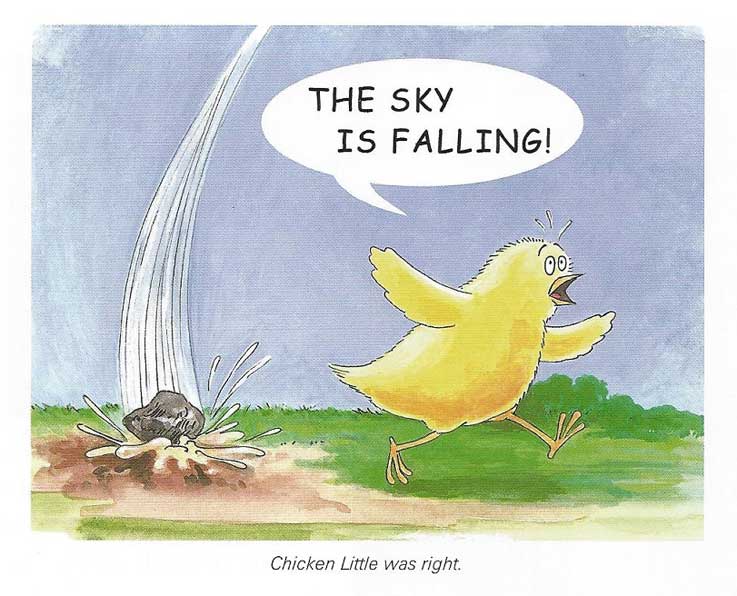