Thin-section Analysis of the Legendary Longstreet Meteorite at Albion College

* To whom correspondence should be addressed

Summary
The Longstreet Meteorite, a showcase of Albion College’s rock collection for almost 70 years, has been investigated. Analyses of its exterior and of thin sections of its interior show it to be sedimentary rock and not, as it was originally thought to be, a meteorite. Announcements of this finding were not received well by College alumni or officials.

Background
The Longstreet Meteorite was donated to Albion College by William R. Longstreet in the early 1940s (Figure 1). It was reported that this “heavy, heavy piece of metal…zoomed out of the sky” and fell onto the property of one of Mr. Longstreet’s servants, where it remained for “over a day…the heat from this heavenly body had been so intense that no one dared approach it” (Hollinshead 1955). In a letter from Longstreet to the Alumni Director of the College, written on June 29, 1944, Longstreet refers to the rock as the “Slinery Meteor,” which may refer to the name of the servant who found the rock. Immediately after being donated to the College, it was “eagerly” examined by Professor Clement E. Rood’s astronomy classes. Although Rood had an established reputation as a scientist (e.g., he was a founding member of the Astronomical and Astrophysical Society of America, now the American Astronomical Society, and a fellow of the American Society [sic] for the Advancement of Science [Buck, 1961]), no scientific analyses of the Longstreet Meteorite took place until the present study.

Investigation
Initial observations of the rock indicated its rough and weathered exterior (Figure 2), which is typical of meteorites, but no fusion crust was clearly identified. The fusion crust would have formed as the surface of the meteorite heated and melted during its rapid fall though Earth’s atmosphere (e.g., Hartmann, 1999). With a mass of 14 kg, the Longstreet Meteorite was heavy and had been proposed to be an iron meteorite.

Thin sections (approximately 47.50 mm × 25.77 mm × 9.94 mm) were prepared and polished in the Albion College Rock Shop and a Leica petrologic microscope with two polarizers was used to analyze them. Thin section analyses clearly indicated that this rock was not a meteorite. No characteristic Widmanstätten pattern, which forms in most iron meteorites, was found. Furthermore, clasts of sedimentary rock and terrestrial minerals, including sand, clay, quartz, and feldspar, were seen (Figures 3a, 3b, and 3c). Additionally, a quartz vein edged with biotite (Figure 3d) and chlorite could also be seen within the thin section.

Lastly, even if the story behind the arrival of the Longstreet Meteorite is taken to be true, the description of the meteorite provided (Hollinshead 1955) does not agree with what is known to be true about meteorites. A meteorite typically has a fusion crust, an aerodynamic shape, and, even shortly after falling to the ground, is cool to the touch. The Longstreet Meteorite had none of these characteristics.

Conclusion
The announcement that this venerated meteorite is, in fact, terrestrial was not well received, especially by Albion College’s long-time staff members and professors emeriti. The artifact was removed from its showcase in the Observatory; it was taken off of the campus tour; and the Admission Office revised the script for tour guides. The legend has been put to rest, and the rock once known as the Longstreet Meteorite has been moved from the Observatory to a more fitting home on a shelf in the Department of Geological Sciences.

It should be noted that it is not uncommon for rocks to be mistakenly identified as meteorites (“meteor-wrongs”; Korotev 2010), and distinguishing between “true” meteorites and terrestrial rocks can prove difficult. Only by careful inspection, analysis of historical documents, and close examination of the physical makeup of the rock was the true identity of the Longstreet Meteorite determined. From a scientific perspective, the Longstreet Meteorite could serve as a brilliant teaching tool for future generations of astronomy students and geology students alike at Albion College.

We thank former and current Albion College laboratory technicians Trish Rising and Robert Harris for assistance in the Rock Shop and in the visual investigations of the “meteorite” and Dr. Carrie Menold (Geological Sciences) for her assistance with the petrologic analyses. We also acknowledge the Albion College Foundation for Undergraduate Research, Scholarship, and Creative Activity for student funding. Finally, we thank Justin Seidler (Albion College Archivist), Kate Casebeer, and Katrina Tooker for finding information related to Mr. Longstreet’s history. 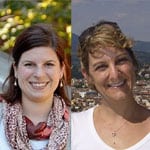