In the last edition, I commenced a series on the tektite “classics”, the essential specimens required to anchor a basic Australasian collection. Splashform dumbbells, teardrops, patties, bars, biscuits, spheroids, and endless plastically deformed oddities reign supreme in the impact-proximal regions of mainland Southeast Asia. Muong Nong-type layered tektites found at scattered localities within this domain provide one of the best clues as to the location and nature of the impacts that produced the vast Australasian tektite strewn field (see my Meteorite Times column of 1/2017). 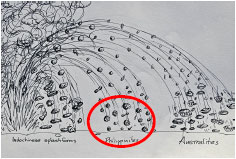 Now, we move down range about 2000 km (1200 mi) to see what was falling from the sky in the Philippines. At the sensational end of the spectrum were cannon-balls of black glass sometimes weighing over a kilo, bigger than anything that fell in the regions nearer the multiple aerial bursts of the 800,000 year firestorm.

Grapefruit-sized projectiles were hurled a thousand miles as the whole earth reverberated and shuddered to dissipate the unthinkable kinetic energy of an impacting asteroidal body traveling at about 100,000 mph.

Figure 1 captures my favorite Philippinite story. The biggest Philippinites (say >500 gms) are nearly always bald, like those on the left in the image. Somewhat smaller specimens retain wonderful soccer-ball-like bread-crust shrinkage cracking, often deeply etched with pits and grooves . At some upper limit in size, the soccer-ball uplands exploded away, ultimately leaving a bald spheroid. At the lower right are examples of deeply ornamented crust fragments that exploded away from a core. These flakes are often termed “Bikolites” by merit of the region where they were first described, although they are clearly Rizalite fragments (or is it Philippinite? Keep reading…) as may be found elsewhere than the Bikol Penninsula.

One story leads to another. H. Otley Beyer, the patriarch of Philippine tektite studies, proposed the term “Rizalite” in 1928 in allusion to the Rizal Province of Luzon where all but one of the initially recognized Philippine tektites were found. As finding localities were extended into other provinces, the Philippinite name became more meaningful and largely replaced the overly-restrictive Rizalite terminology. As a further complication, it has now become quite common for cannon-balls, soccer-balls, and big amagorphians* (see figure 2) to be grouped morphologically as “rizalite-type”, while the smaller ornate spallation flakes get the “bikolite-type” label. “Philippinite” is now the preferred umbrella term for Philippine tektites in general.

Since the days of H. Otley Beyer, strange zoomorphic monsters have been celebrated. I won’t offer any scientific insights as I would certainly reveal my ignorance. They’re just cool and sometimes very large. Please send creation stories. I could use some help here.
Beyer had two odd monstrosities he named “The Monster” and “the Animal”. These were acquired by the late Darryl Futrell and were subsequently sold to a new Canadian Impact museum.

Regardless of size, most Philippinites are spherical, sub-spherical, or lenticular (like those on the left of figure 3), as if derived from a shower of glass balls. In their molten stage within the impact fireball, they were oscillating low viscosity molten orbs.

Apparently the ejecta ray that was pointed towards the Philippines was loaded with materials that were blasted high into the deep cold and relative void of space before much systematic aerodynamic deformation took place. However, there are also rare dumbbells, teardrops, ovals and other splashform morphologies, all typically deeply corroded with meandring grooves. These would have assumed their primary geometries during the turbulence of the impact event and were incorporated, fully formed, into the ejecta ray. During their descent into the Philippines and surrounding regions there was no reversion to a molten state even as a thin surface melt layer. The principal changes are corrosional. I imagine fingers of sun-hot plasma buzzing over the surface of the stone, carving grooves like a welding torch, as the stone plummets deep in the atmosphere.

Philippinite skin ornamentation is a long story for another day. It was the key to the initial recognition of Philippine tektites. Billitonites (see my Meteorite Times column of 3/2016) had previously been recognized as “true tektites”. An acquaintance of Beyer’s introduced him to a small Billitonite specimen (and, I believe), to the whole subject of tektites. In Beyer’s own words “…he had solved our problem.” The black glass with its characteristic pits and gutters was virtually identical. That is the point where Beyer recognized that, although they were technically the same, he could not appropriately call his stones “Billitonites” or “Australites”. The Philippine specimens recovered to that time (except for one that winked knowingly of the future), were all from the Rizal Province of Luzon. In conformity with the naming practice of the time, “Rizalites” were introduced to the world.

There is another crowning mystery in Philippine tektites. Most famously, on the Anda Peninsula, “Anda” tektites are part of the sacred lore. I still don’t claim to know their story, but they look like a block of black cheese that has been nibbled all over by mice!.
This rodent-gnawed appearance is occasionally seen in southeast Asian and Chinese tektites as well, but it reaches its unchallenged supreme form in the Anda Penninsula region of the Philippines. Great Andas are highly prized (and priced).
They are also another semantic battleground. Real Anda tektites MUST come from the Anda Penninsula. There are and can be no Anda tektites from Thailand or China or anywhere but Anda. Beware of fallacious claims on internet auction sites. However, permission is freely granted for use of “Anda-type….”.

Reduced to the bare minimum, we were able to simplify the impact-proximal Indochinites into only 3 basic forms (spheroid/patty, dumbell, & teardrop). It has been a degree more complex with Philippinites and there is still much we don’t fully understand. Why must you go a thousand miles downtrend to find tektites weighing over a kilo? Are the meandering channels related to plasma-jet corrosion? And importantly, just what sort of mice live on the Anda Penninsula?

Next edition the series moves another thousand miles downstream for a look at the Aussie tektites.

*Somewhere above there is an asterisk sending you here for more information about amagorphians. I once worked with a backcountry bulldozer operator who commonly blamed both “big donakers” and “amagorphians” for his slow progress. I never was sure of the difference, but I’ve always thought that amagorphian should be adopted into the geological lexicon simply for its euphonious qualities. We will see if the scientific world is quick to adopt our pioneering terminology. For the purposes of this article at least, an amagorphian is hereby defined as a large (>150 gm to >500 gm) zoomorphic, anthropomorphic, or cryptomorphic irregular Philippinite mentioned in a Tektite Teaser column.

Norm Lehrman is a recently retired exploration geologist with over 45 years experience. His career involved fieldwork in over 35 countries on every continent except Antarctica. While stationed in Australia, Norm and his wife, Cookie, became interested in collecting Australites, which ultimately led to a generalized passion for tektites, impactites, meteorites and related materials. In 1999 they founded the Tektite Source business (www.TektiteSource.com) which has evolved into one of the world's premier providers of tektite and impactite specimens. Norm has retired to a ranch near Spokane, Washington, where they continue to serve tektite aficionados worldwide.
PrevThin-section Analysis of the Legendary Longstreet Meteorite at Albion College
Allende CV3Next