The Moon In My Hand 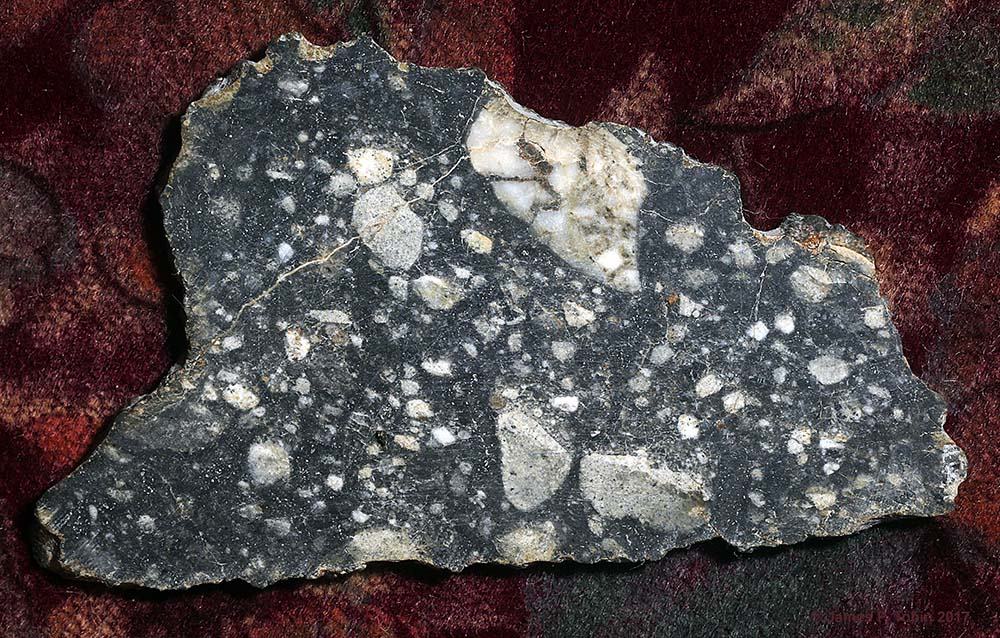 Over the course of my life, I have cut thousands of rocks on diamond saws. Most of the rocks the last twenty years have been meteorites. But until yesterday I had never cut a lunar meteorite. There has been a significant amount of meteorite from The Moon recovered recently, Paul and I decided that we would get a large piece and cut it.

Initially, I had fears of the material being friable and that it would fall apart in the saw. To be honest, I had never had a large piece of lunar meteorite in my hands to hold. I have a nice selection of pieces in my collection, but they are mostly measured in milligrams. Last Christmas, I bought my wife a small individual of about one gram and another individual for myself of just over a gram. For even that recent a time it was a great thing, a whole stone from our nearest neighbor.

The lunar I cut was 148.1 grams. That was exciting to hold. I let my wife hold it too she loves anything about The Moon. The stone is classified, all the work is done but it not yet listed in the Meteoritical Bulletin. It is a feldspathic regolith breccia and seemed pretty solid actually when I had it in my hands.

I decided that I should photograph it extensively before cutting it into slices. One of the first thoughts I had was how different looking it was from other meteorites. How many of them have I walked past while hunting meteorites because it does not look like a meteorite at all without a fusion crust? It looked quite similar to the basalt you might find almost anywhere in the Mohave Desert except for the lighter colored white and gray clasts that show on the outside. 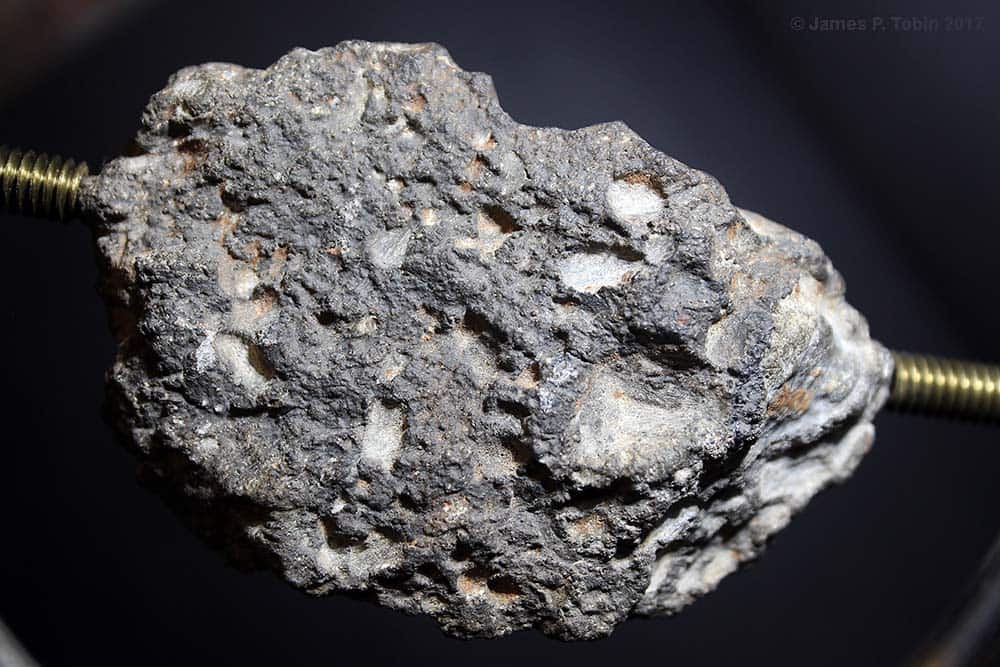 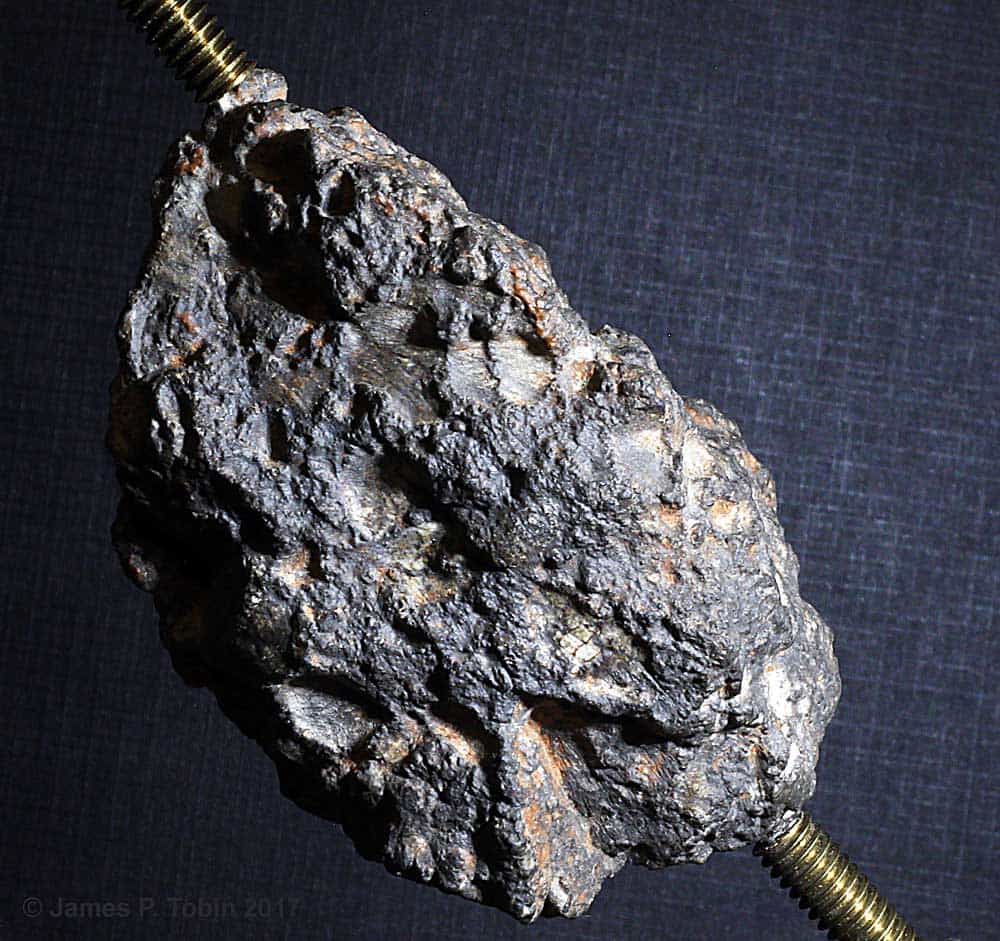 After I had taken several dozen images of the uncut meteorite with different lenses from whole views to close-ups to very close macro images, it was off to the lab to cut it. I warmed it gently measuring the temperature with my infrared gun to keep from heating it too much. Any temperature above about 150° F is hot enough to make a good strong attachment to dope wax. I dipped one of the pointed ends into a melting pot of dope wax and stuck it onto the end of one of my special aluminum dope sticks then held it until it cooled. I was ready to cut. I marked the two equal endpieces that were spoken for on the stone with cobalt blue pastel chalk. 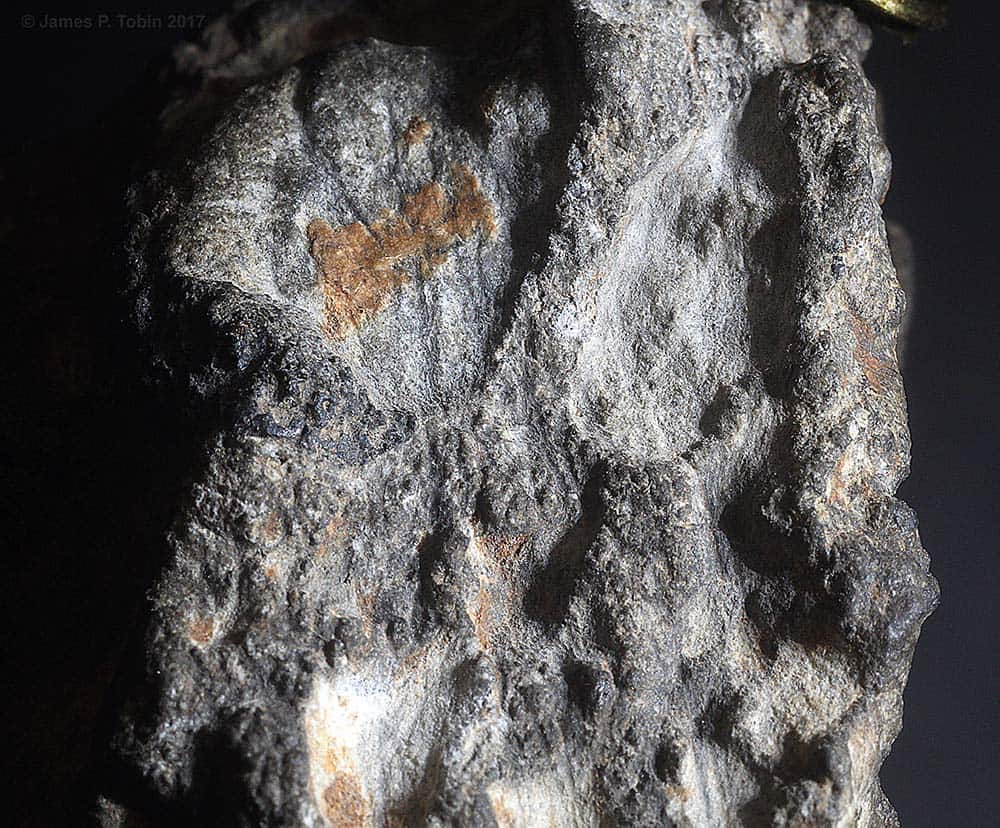 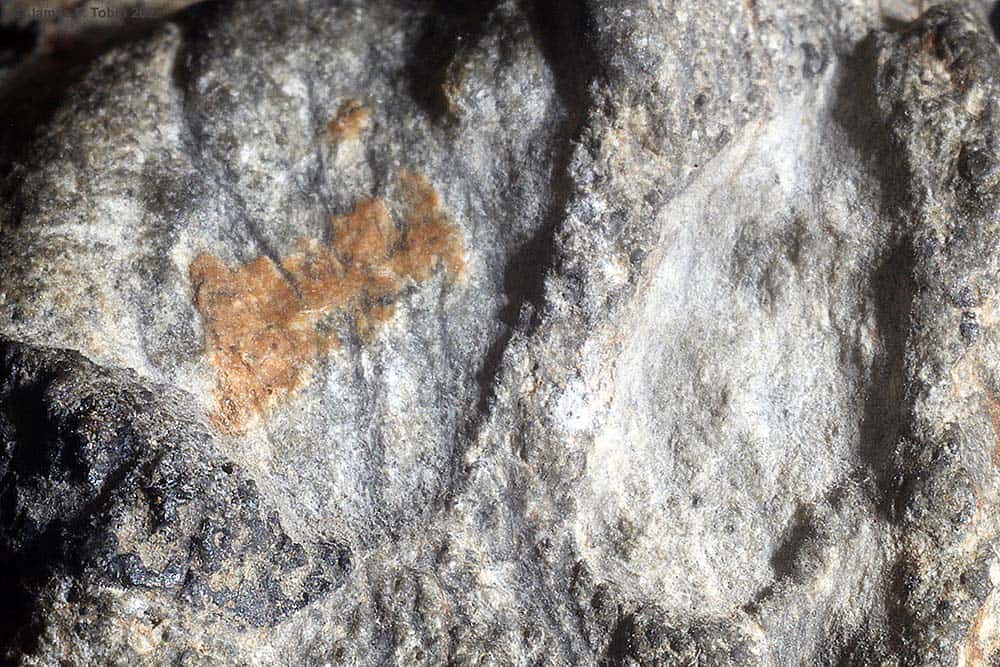 My aluminum dope sticks function not only as a holder for the stone but also fit into the saw so that I can advance the stone over an exact amount after each cut. The dope stick is a mandrel that is pushed by a threaded rod with a knob that I turn to move it over. A disk on the threaded rod moves to the right as I turn the knob also and pushes in the plunger on a dial micrometer. I can just turn the knob and set the exact thickness of every slice. I do not have a wire saw but I can routinely cut slices with my .010 inch blade of just under one millimeter if the material is strong.

I have a precision forward and reverse mechanism that I built for moving the stone through the blade and back out after the cut is complete. I can go as fast or as slow as I want and the motor will allow. I have surfaces so smooth most of the time that there is very little lapping needed to remove saw marks. There just are not many grooves to grind off. I guess I am kind of proud of the saw I made. It is the end result of two decades of advancements in design, and it works very well.

Before I mounted the mandrel into the holder on the carriage, I cleaned the saw. It was a brown mess from all the chondrites I had cut for a year or so. There is no reason for me to clean it normally the coolant water recirculates and is filtered through screens in the bottom of the saw so only the very fine particles of cut meteorite can go to the water tank under the saw. This keeps the electric pump from being clogged or jammed by bits of stone. I cleaned the saw and washed out the tank because we wanted to save the waste from the cutting. I put fresh water in the tank. It takes about two gallons to submerge the pump.

I was ready to go. It was about 8 AM and had taken an hour to get prepared for what I hope was not going to be a frustrating and scary day. I put the stone in the holder and moved it over until the blue chalk mark aligned with the blade and locked the mandrel in place. I adjusted the lock nuts and disk so that they touched the micrometer plunger just barely. This would give me the most cuts until I had to reset them to let the plunger back out. I can get approximately one inch worth of cuts before the plunger has been pushed to its limit.

The blade was one that I had only used for a few cuts and was still good, so I began. I turned on the pump and saw motor and advanced the stone until it touched the blade. Then slowly and smoothly moved the stone forward until the endpiece fell off onto the foam rubber pad below the blade. A perfect cut. I now had the only tough decision of the day. How thin could I cut the slices? I dialed the stone over 100 thousandths and made the cut for my first slice. The cut was perfect. The slice was too thick I felt, so I dialed back the setting of the next one to .075 inch and made another cut. The stone was solid and strong, and the slice came out just over one millimeter which is what I wanted. Over the next three hours, I sliced the stone into 18 slices and the two large endpieces. My big fear of a slice breaking which would expose the blade and let it deflect making a continuation of the cut very difficult did not happen. No need arose to cut any clean up slices to smooth up the stone. I had no bad slices with a step of two thicknesses. 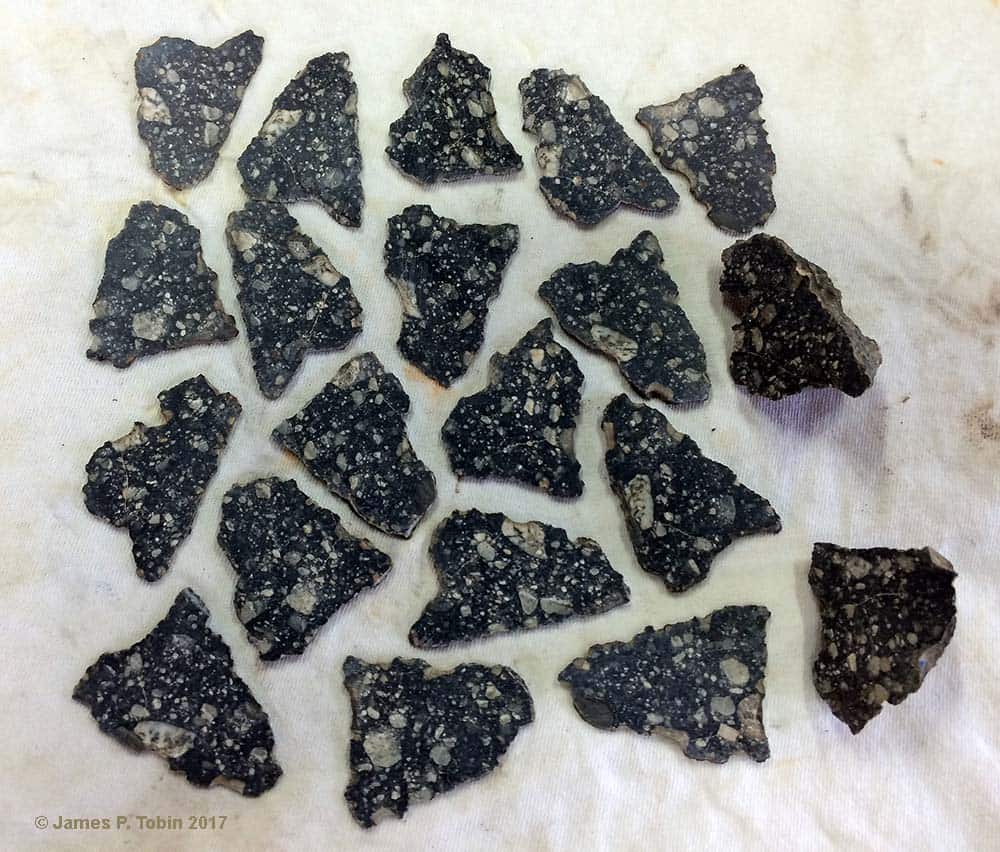 Eighteen beautiful slices of the lunar meteorite now needed a touch on the diamond lap to smooth them on each side. Then a finish lap to the degree of polish I had to choose for them. I picked the 600 grit lap for smoothing them and the 1200 grit to leave the surface on one side at a low polish. It was just 12 noon when I finished cutting the slices, so I grabbed a bite of lunch before returning to the finishing work. I had 38 surfaces to smooth to 600 grit and 20 to finish to 1200 grit low polish. I also decided to polish the two endpieces to 50,000 mesh diamond a nice high polish. I was a little concerned about breaking the very thin slices while they were on the lapping machine. I often run it at a pretty high speed on thicker slices, chunks, and endpieces. But I slowed it way down for these one-millimeter slices. It would not really matter at this point if one cracked it would just be another piece to sell and make two which would be lower priced. But none broke and I was happy about how tough the stone was.

Each time I retrieved a slice or endpiece from the saw, I looked at it briefly. The big surprise for me was the tiny blebs of metal that I could see on nearly every surface. I was not expecting to find any metal. I knew that the impacts on The Moon put tiny amounts of metal in the material I just had not thought about seeing that in the one we were cutting. I found it very cool that metal was showing even if it was just a few tiny pin prick size blebs. 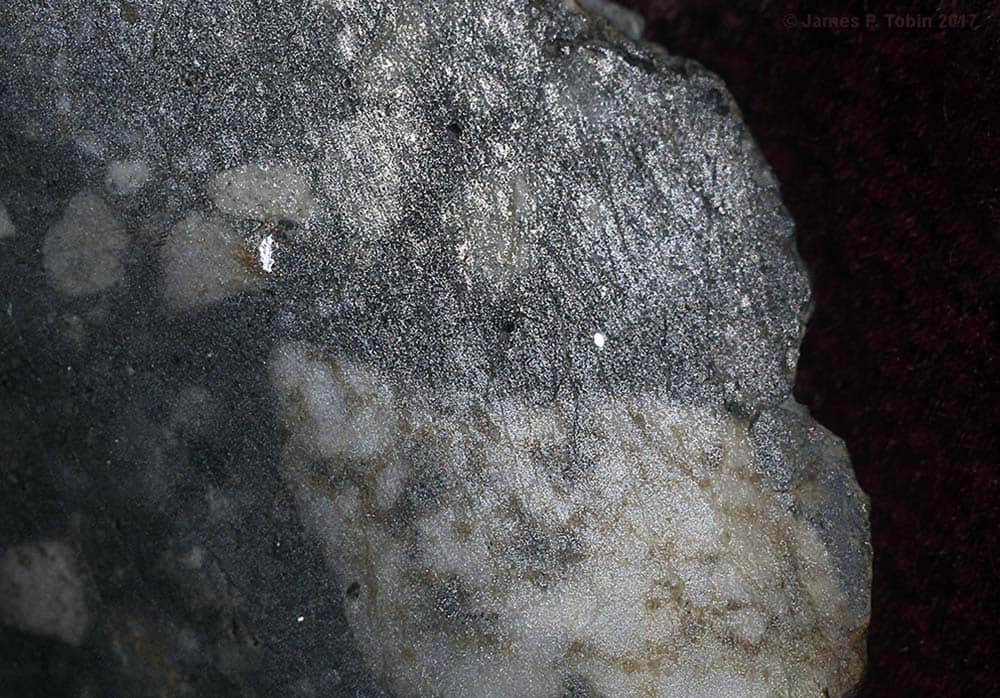 I created 20 pieces from the 148.1 gram stone. I ended up with 123.282 grams of material after cutting. The cutting loss was 16.76% or 24.8 grams of material. I was happy with the amount of waste since the surface area of the slices is very large, and of course, we saved it. That will be a project of its own but something I have done with Allende before, recovering the dust for bottling. There is something about Moon Dust though that is far more special than Allende dust even with the diamonds that are in it.

It was not a scary or frustrating day at all; it was a good day. I finished about 4:30 in the afternoon and that included the weighing and placing into plastic cases of all the slices. I was seeing Paul the next day when he was in the area, getting the material to him was going to work out well. I had brought the meteorite home on Sunday and it was finished on Monday afternoon. About the fastest turn-a-round, I have ever done on a stone. I know the two individuals that are receiving the endpieces will be very happy with how they came out.

The Meteorite Exchange, Inc. was born in 1996 with meteorite.com and Meteorite Times Magazine in 2002. Still enthusiastic about meteorites and all things related to them, we hunt, collect, cut and prepare specimens. We travel to gem shows and enjoy meteorites as much now as in the beginning. Please feel free to share any comments you have on this or any of our other sites.
PrevThe 2017 Veterans Meteorite Hunt
Meteorites, Me, and the NewspaperNext