Is it a Tektite or a Pseudo-tektite?

Is it a Tektite or a Pseudo-tektite?

Now there is a quick test to tell the difference. 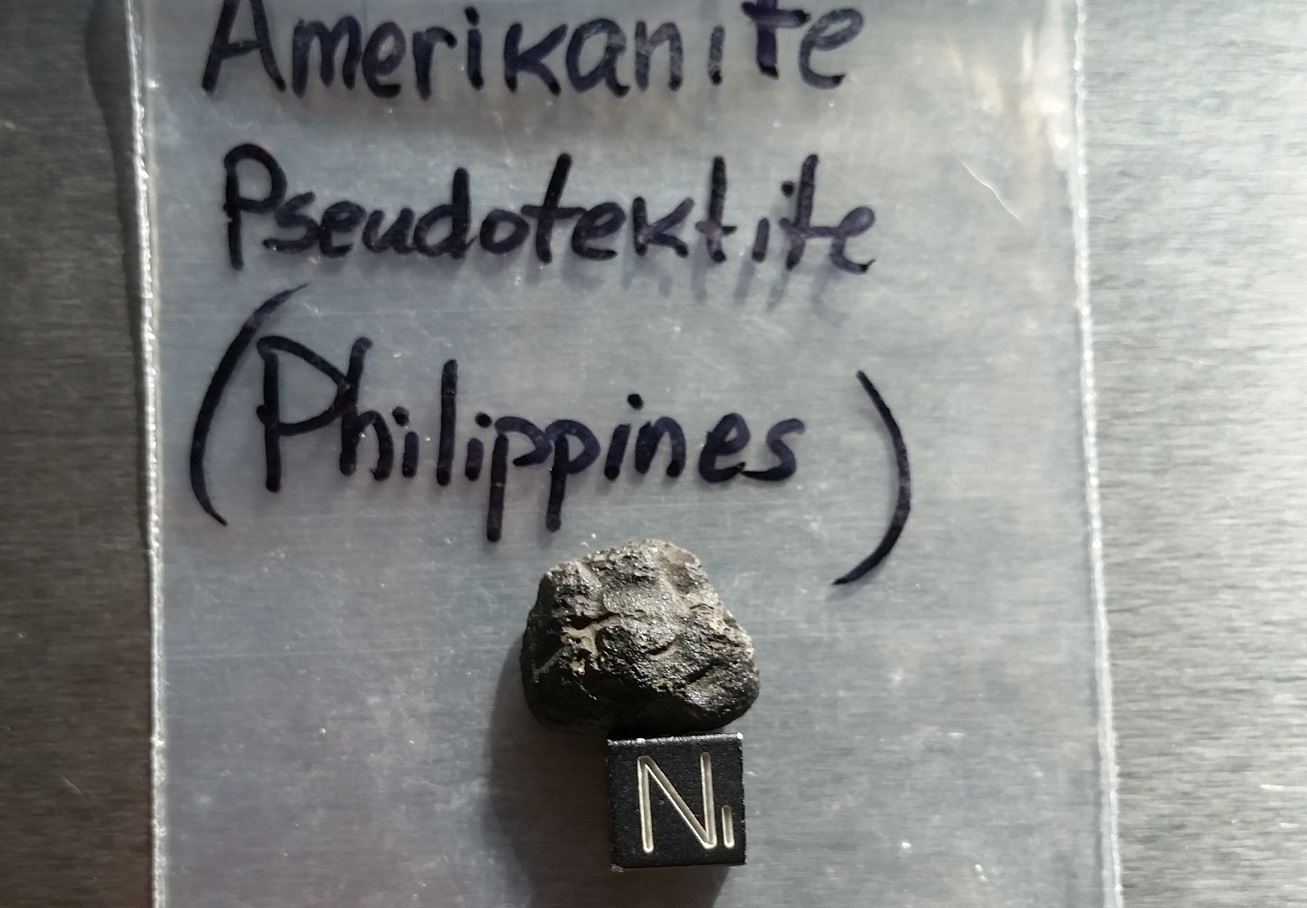 As they say in Hollywood, “Let’s cut to the chase.” So, I will admit right now, this “quick test” will require a hand-held XRF analyzer. At least, that was the device that I was lucky enough to get access and to run my tests. Now this may not sound like a simple task, but devices like the Thermo Niton XRF (x-ray fluorescence ) hand-held spectrometer that I used, are getting more common (and newer models are coming out) and are becoming available for testing your specimen (at a nominal fee ranging from $5 to $35). 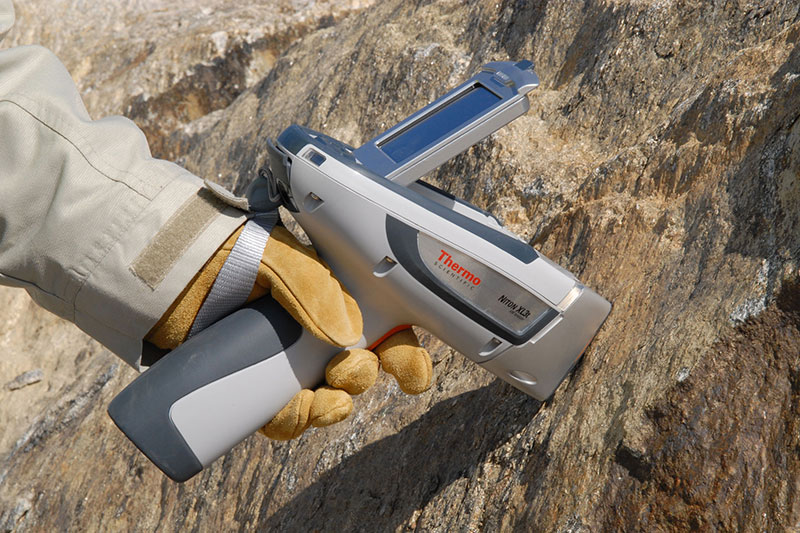 And while we’re getting right to the point, I should also admit that the only metal element that I focused on was Ti (titanium). So, there is no complex analysis of the myriad elements listed in the results. And while what I am about to share with you may be common knowledge to tektite researchers, I had to personally recognize this one fact by testing many specimens of obsidian and tektites. Given the numerous discussions about how to distinguish tektites from obsidian, and whether certain natural-glasses, such as “Healdsburgites” and “Saffordites”, are actually pseudo-tektites, it appears to me that, if a simple and definitive diagnostic test actually exist, it should be shared with collectors. 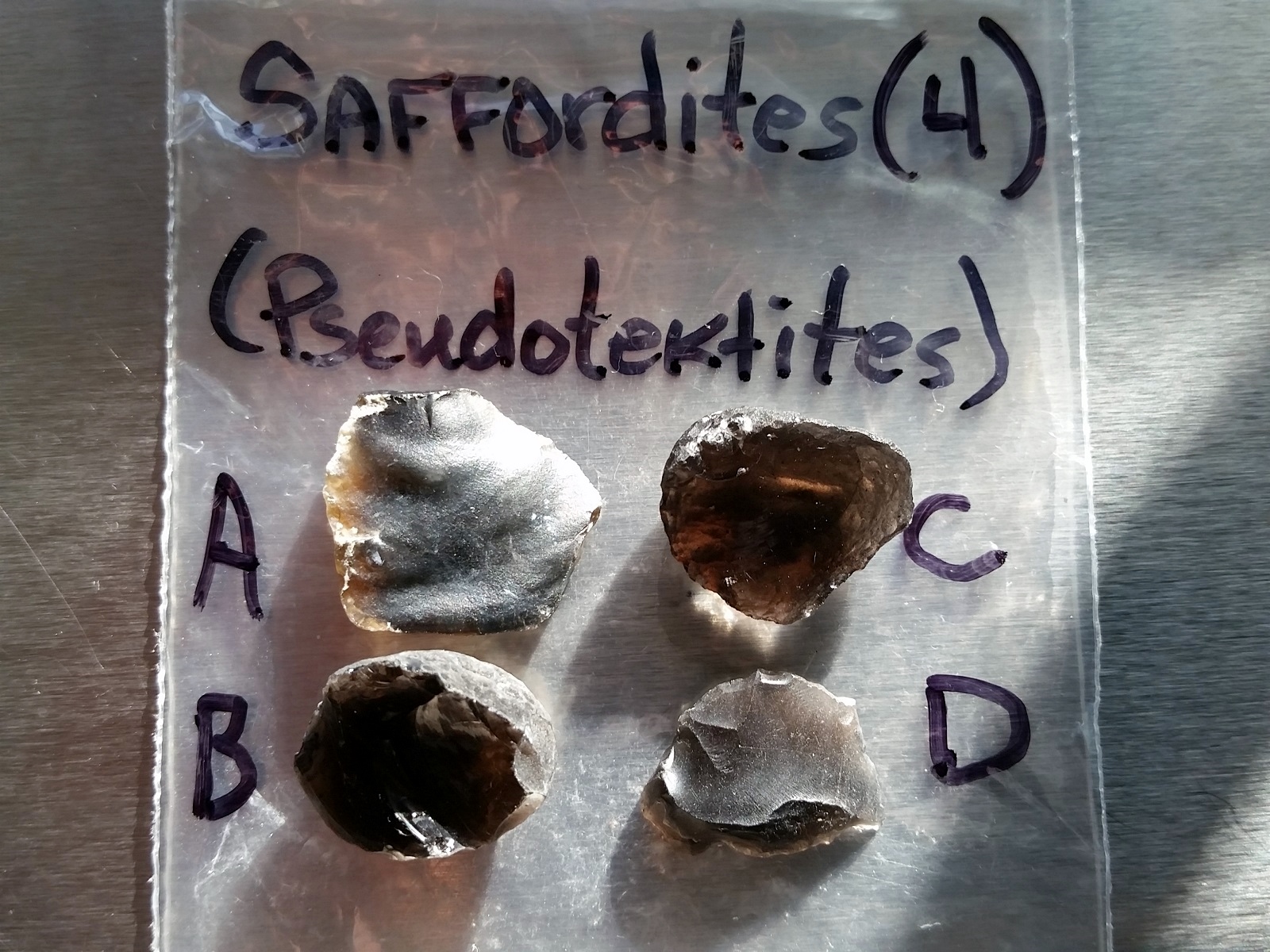 These specimens, as well as many other examples of tektites and pseudo-tektites and impact-glass, were lent to me by our friend and fellow tektite-expert, Norm Lehrman. Unfortunately, they weren’t received in time to be included in this article. They will soon be tested, and their results will be in a future article.

In the same way that meteor-wrongs got me to spend too much time researching and writing about “ferro-silicon” and “slag” (to the point that people were contacting me because they thought I was a “slag-expert”), the last thing that I wanted to do was to risk being thought of as a “pseudo-tektite-expert”! But, too many people were contacting me and telling me that their glass pebble must be a tektite, because it passed the “flame-test” by not turning into a frosty-white, mass of foamy glass (see Jim Tobin’s 2011 M-T article). Yet, when Jim Tobin tested these same specimens, every one of them would turn white: a negative test-result for being a tektite. Apparently, these people weren’t using a hot enough flame. With so many false-positive test-results, I decided that it was time to find a more definitive test for distinguishing tektites from obsidian. This specimen, as well as others, was lent to me by a collector from Palm Springs, after hearing that I needed some “Healdsburgite tektites” for XRF testing. His specimens were self-collected, back when he was living in Sonoma County, CA. Unfortunately, his specimens did not pass Jim Tobin’s flame test.

So far, with all of the specimens that I have tested this has been the case. (Testing of additional specimens continues).
When I graphed the test results of all the obsidian and tektite specimens that I analyzed, the ratio of Ti (to whatever other element you chose) always produced two fields that never overlapped. This is why I call the Ti values obtained by XRF testing to be diagnostic and definitive for determining if a specimen is obsidian and not a tektite. 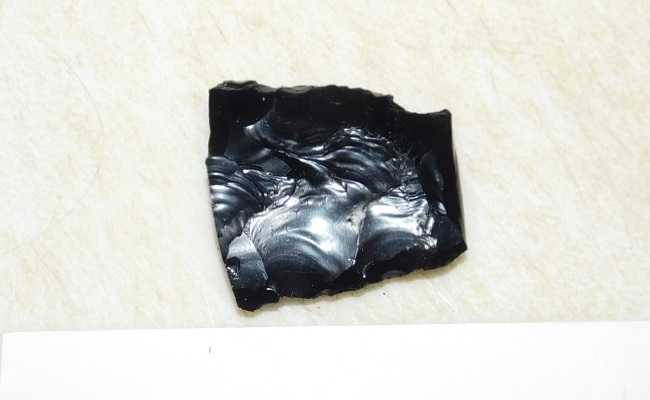 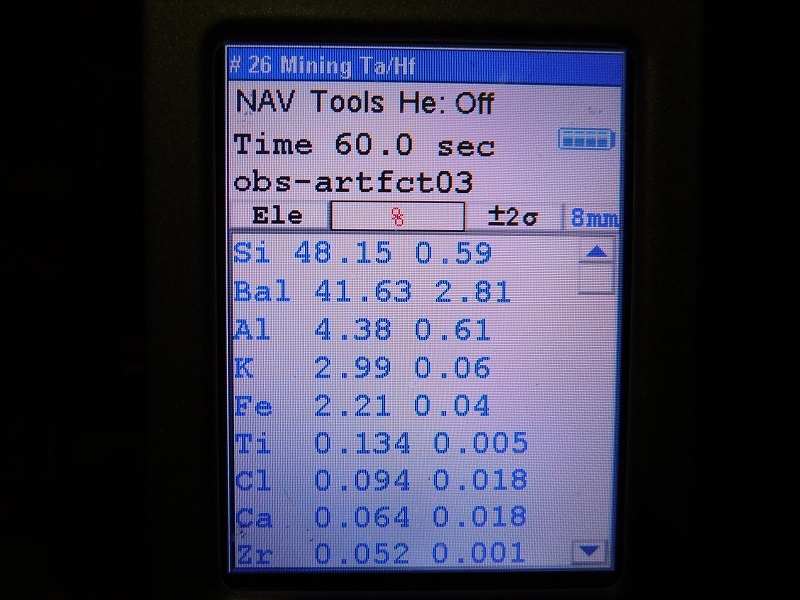 A rough-hewn but broken blade of black obsidian.
Just one of many samples that represented a wide variety of “obsidian” localities. But none of the obsidian samples have yet to go above 0.2% for Ti. 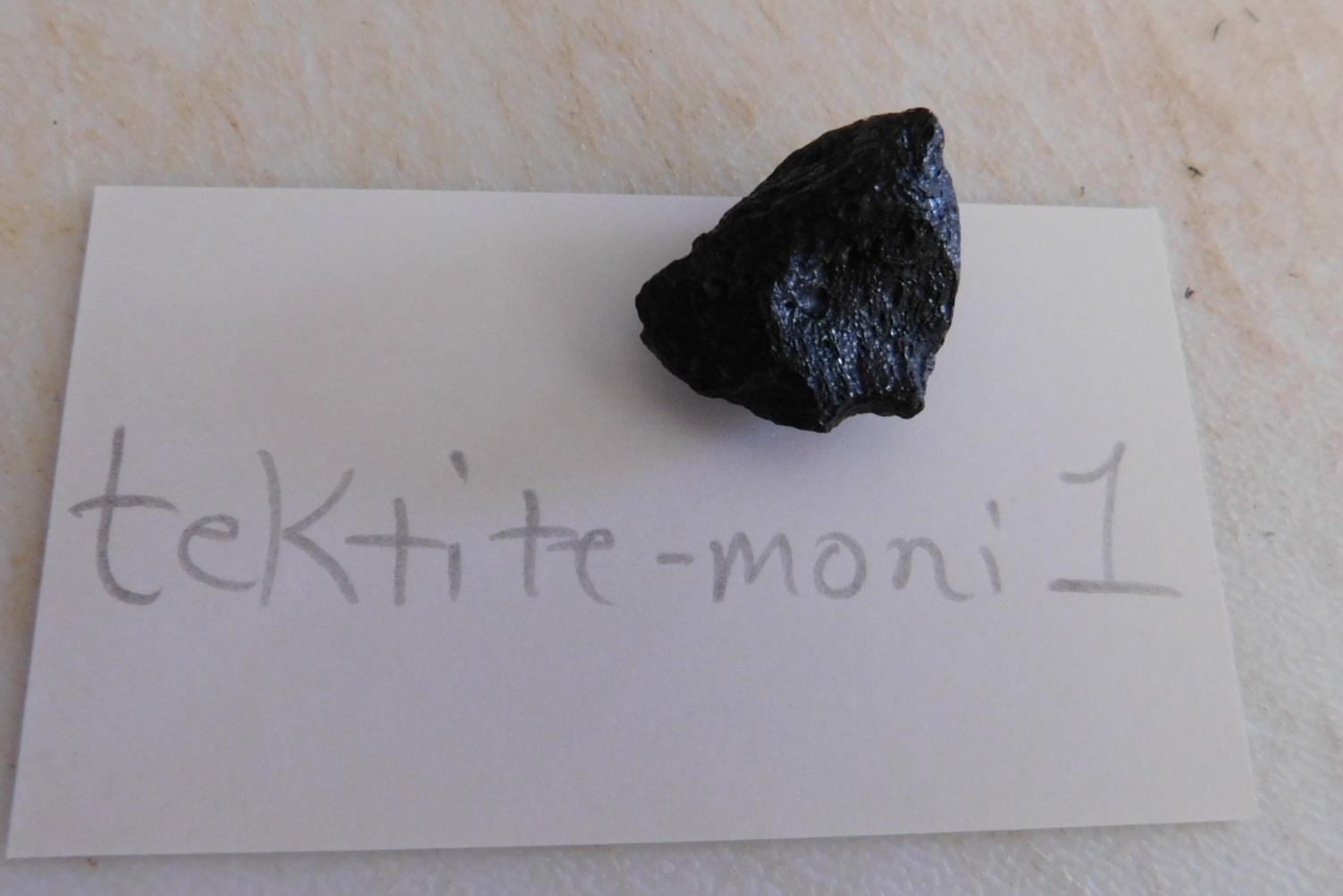 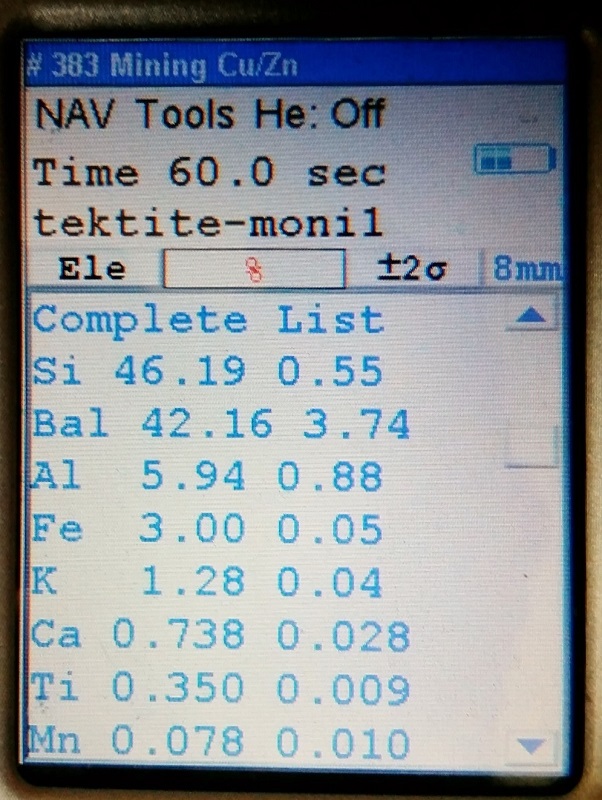 Just one of many tektite specimens that represented a wide variety of tektite localities. But none of the tektites that were tested have yet to go below 0.2% for Ti. 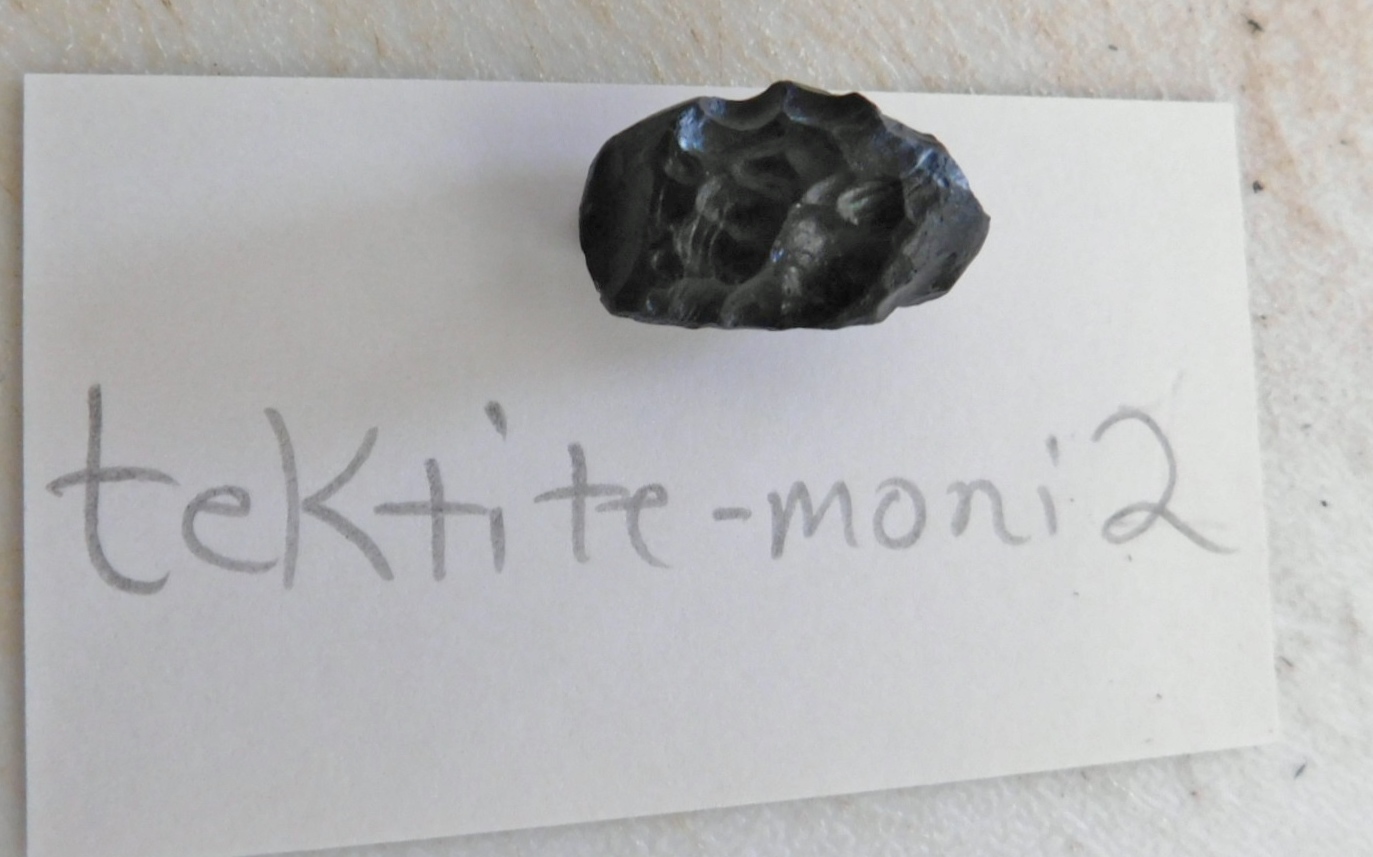 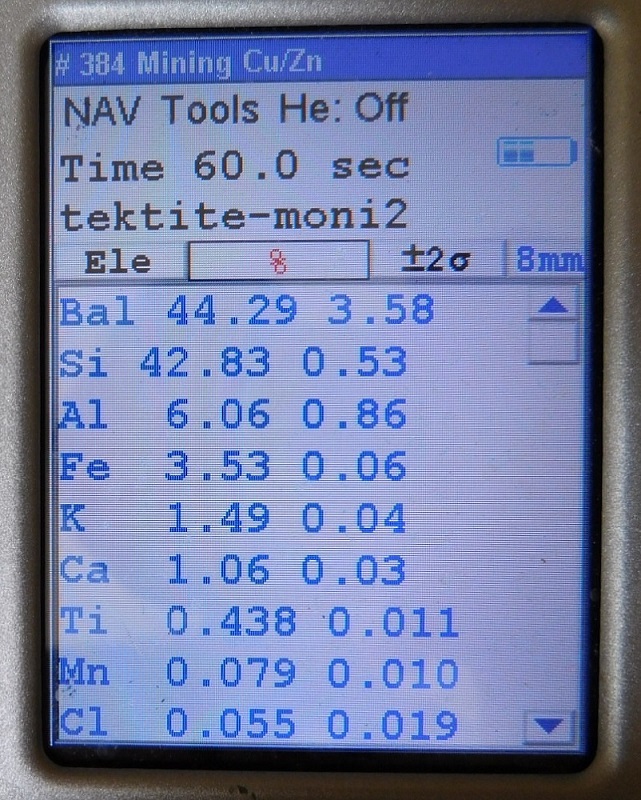 Another one of many tektite specimens tested that was identified as an “Indochinaite”. So far, none of the tektites that were tested have yet to go below 0.2% for Ti.

Here is another admission. I am just at the beginning of this study. I may soon discover that everything I am working on has already been done and is published. I may be only “re-inventing the wheel” with this difference in Ti% between obsidian and tektites. But so far, I haven’t come across anything. But there is a lot of related literature. For example, in these very same Meteorite-Times, I went back to 2002 to find an article titled, “A NEW METHOD TO DETERMINE THE DIFFERENCE BETWEEN TEKTITES AND OTHER NATURAL (VOLCANIC) GLASSES“, by Stephen E. Pierce, to find this very same subject being discussed. The author was trying to promote a technique he called “Spectrophotometric signatures” over the other analytical methods of that time. Back then, it was more costly to do “chemical analysis”, and to do measurements just for Ti would never have been considered a cost-effective diagnostic test. Unfortunately, he turned-thumbs-down on the chemical method, because the results would be ambiguous since “the tektite and obsidian oxides overlap”. But that isn’t true for all oxides. And TiO2 (titanium oxide) is one of them that does not “overlap”. So, that is why I’m making the point that the ease of access to the current XRF technology has lowered the cost of this kind of analysis and has made this a viable diagnostic tool.

At this point you may be asking, “What about impact-glass”?
When it comes to the various “impact-glasses”, most of them are problematic with regards to finding a common diagnostic chemical analysis. Their lack of a common composition is part of the problem. As you may suspect, the composition of an impact glass would have to be dependent upon the type of target (terrestrial) rock that is being impacted. (Why this is less of a factor for tektites, I can’t remember.) But suffice to say, as long as the target rock isn’t obsidian, the odds are that the TiO2 % will have values above 0.2% – – – yet this is another example of why Libyan Desert Glass (LDG) is so enigmatic. For starters, the average percentage of titanium in LDG is low, and factoring in that there are various compositions for the many LDG stones that have been recovered, some of the stones tested have dipped below 0.2% in TiO2%.

There are many more reasons why I’ve kept “impact glass” out of this discussion. Because this is a class that needs a lot more work. And I will do my part by continuing to test “impact glass” (as well as, other natural glass), and by recording and reporting those results. 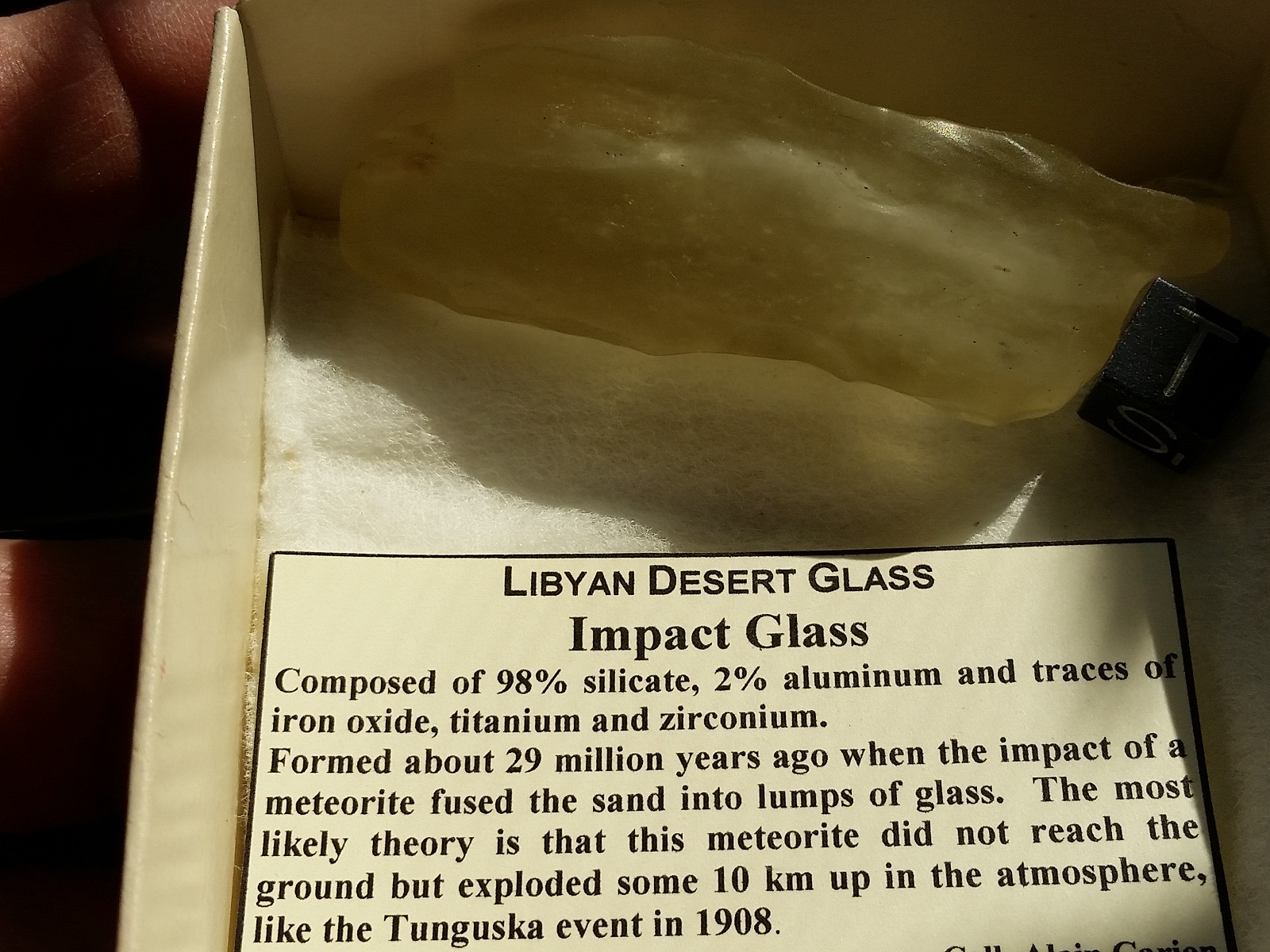 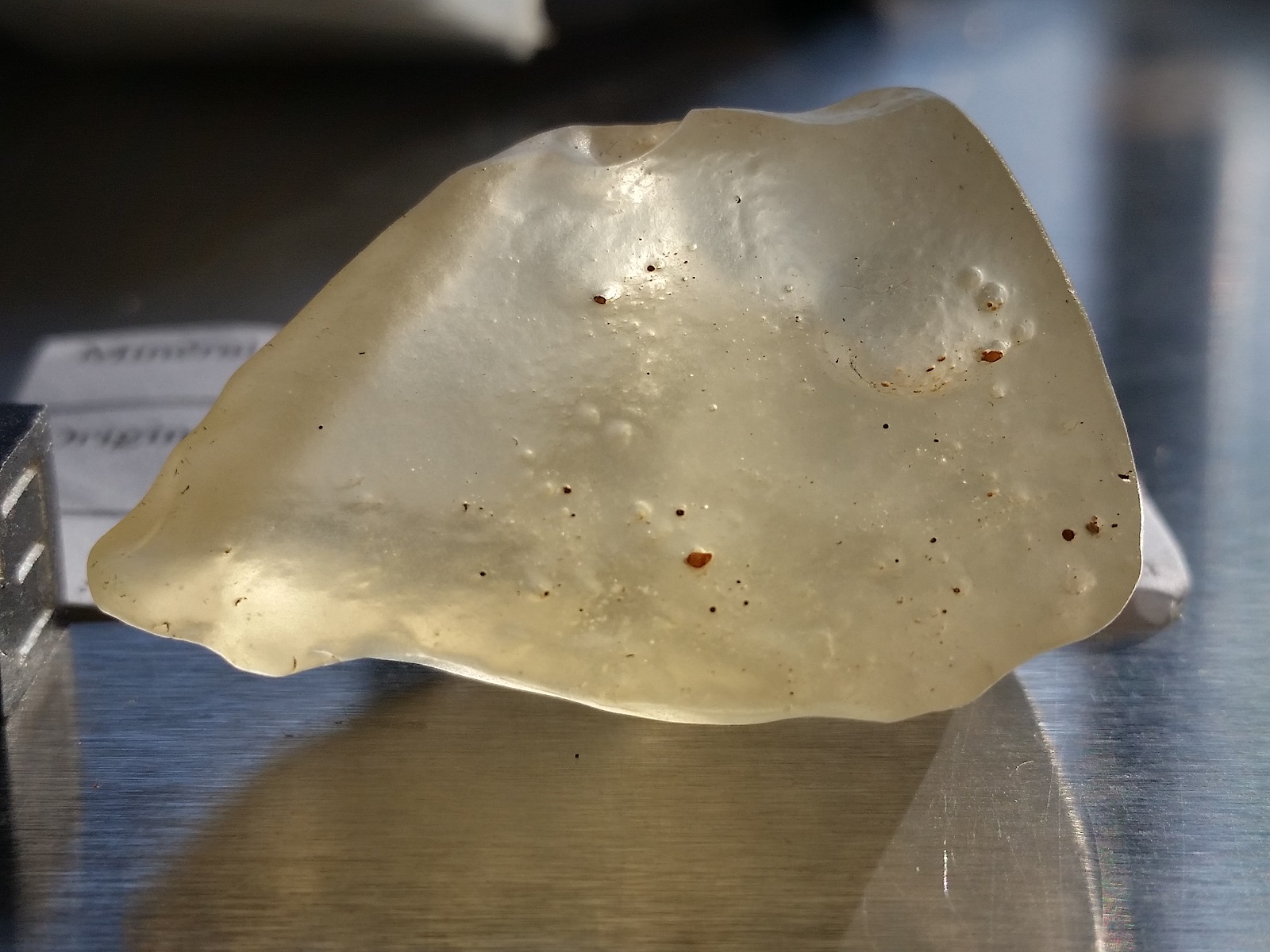 Libyan Desert Glass (LDG) composition-wise, is neither obsidian, nor is it a tektite. LDG stones are an enigma. More work needs to be done on these and other “impact-glass”. I am looking forward to testing all of my LDG stones, and other glass samples lent to me.

I will end this (Part 1) article with a selection of images of specimens that will have their test-results presented in a future (Part 2) Bob’s Findings article. 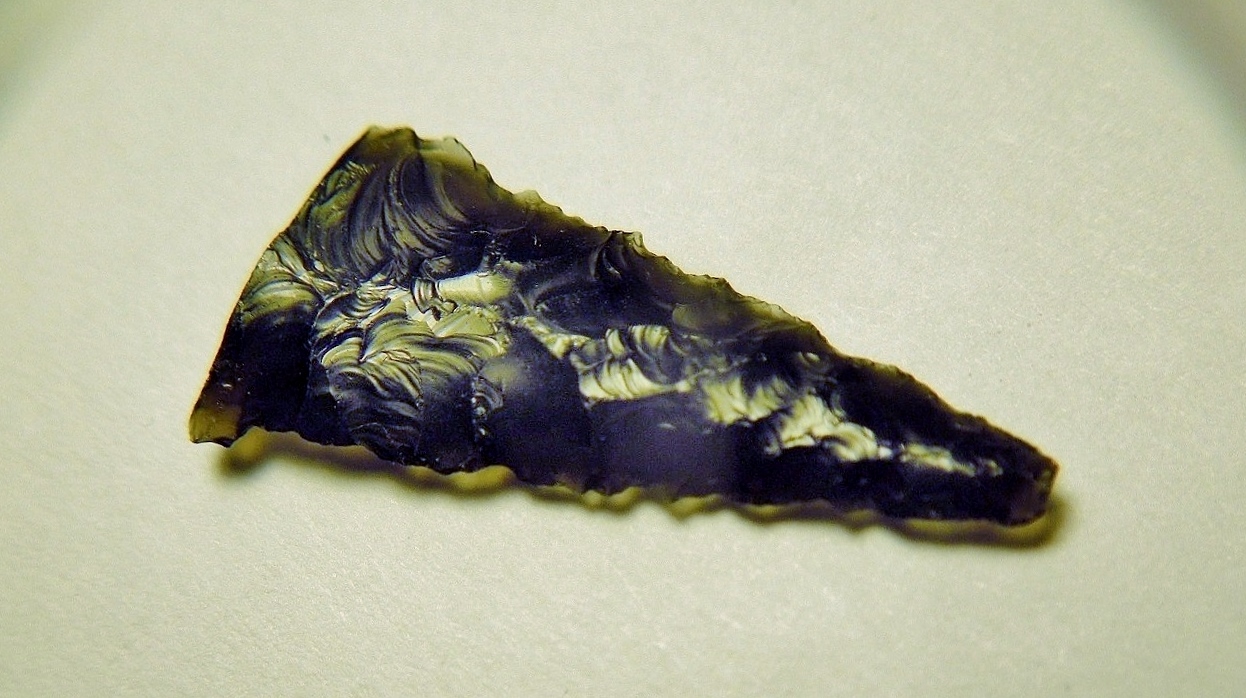 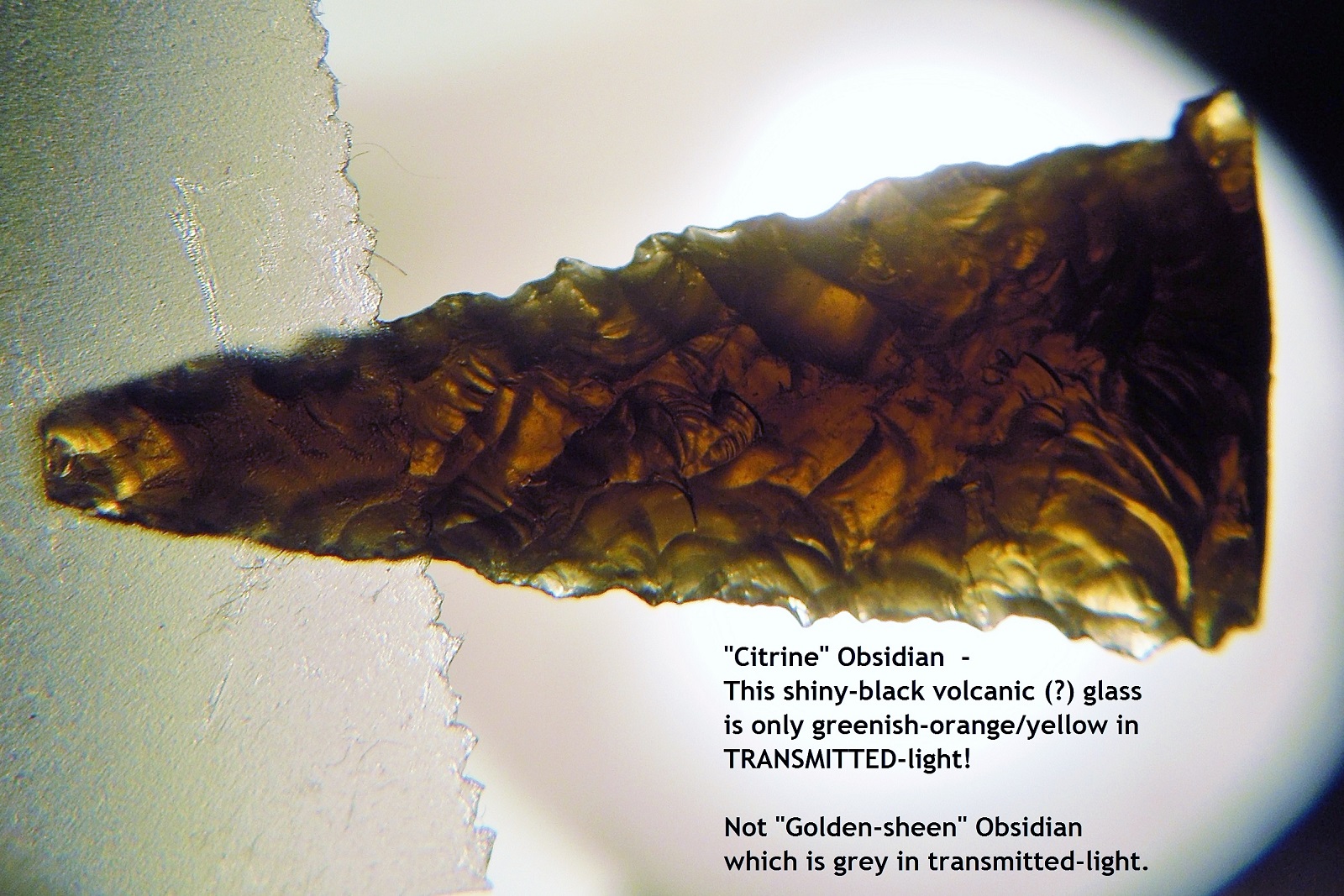 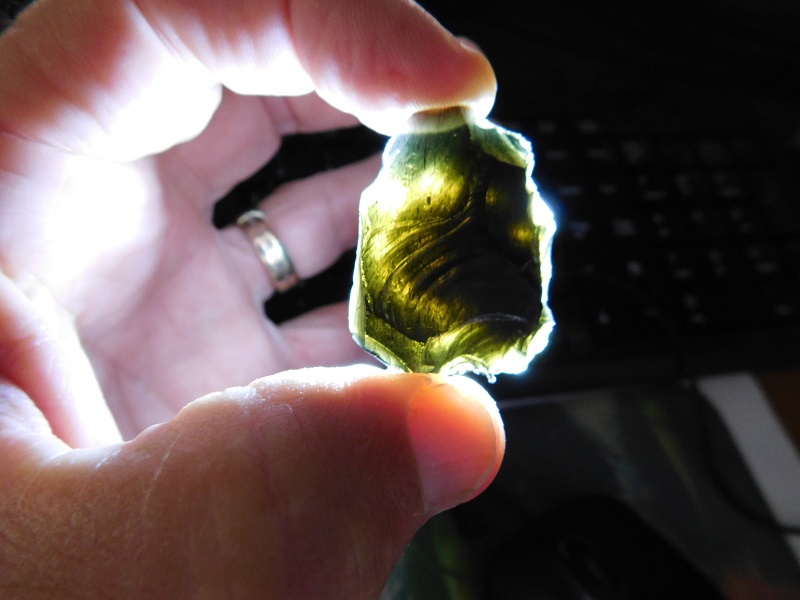 This “obsidian” specimen came from the same area of Nevada as the above/previous piece. Although there is such a rock as “green obsidian”, it is never green in TRANSMITTED light! Although there is such a rock as “rainbow obsidian”, it is ALWAYS GRAY in TRANSMITTED light! To see the rainbow-, or the gold-, or the silver-sheen in obsidian the source-light has to be behind the observer! Until I encountered this specimen, I have never seen this color of transmitted light, through obsidian. IN THE PAST, this color would have been supporting evidence that the natural glass is from a tektite. 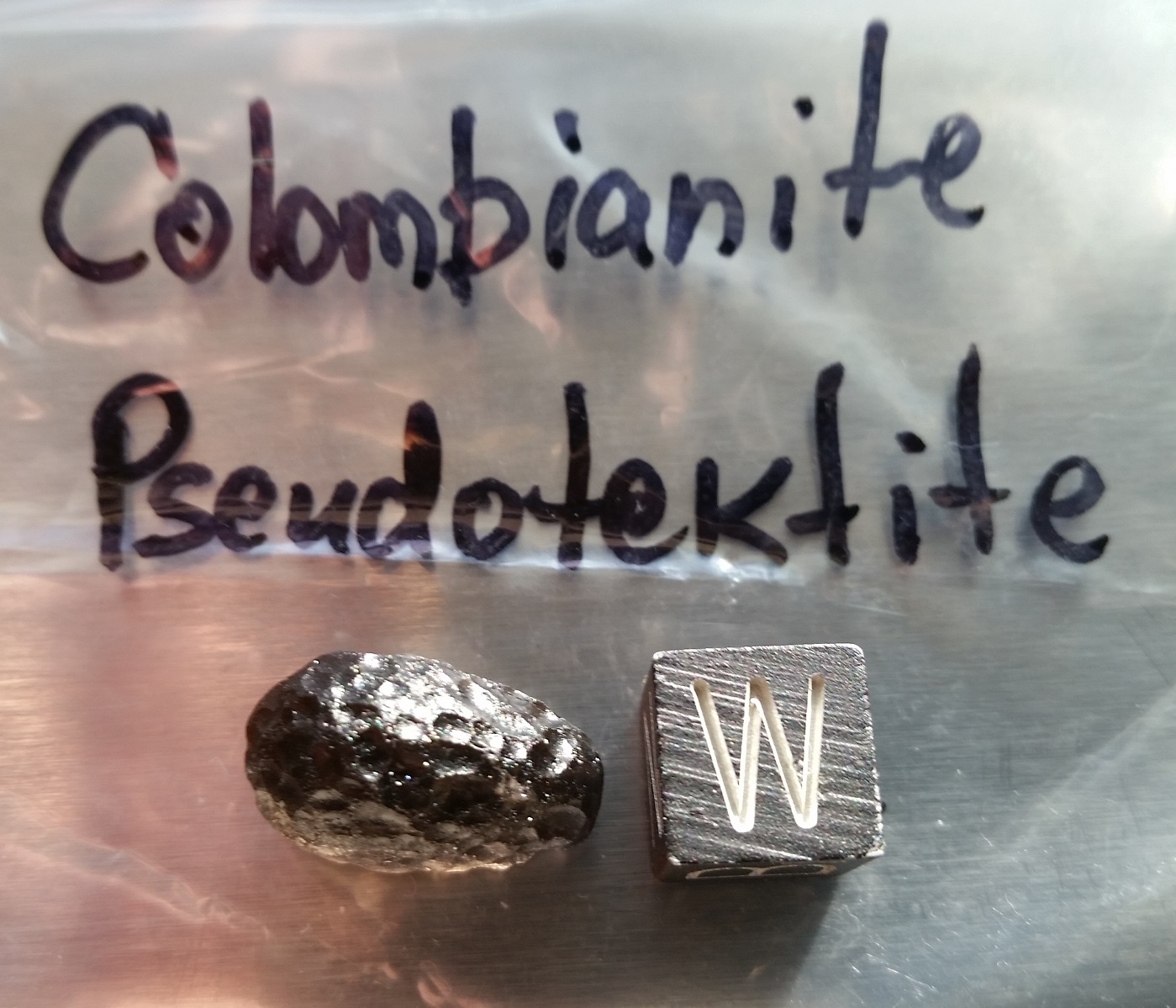 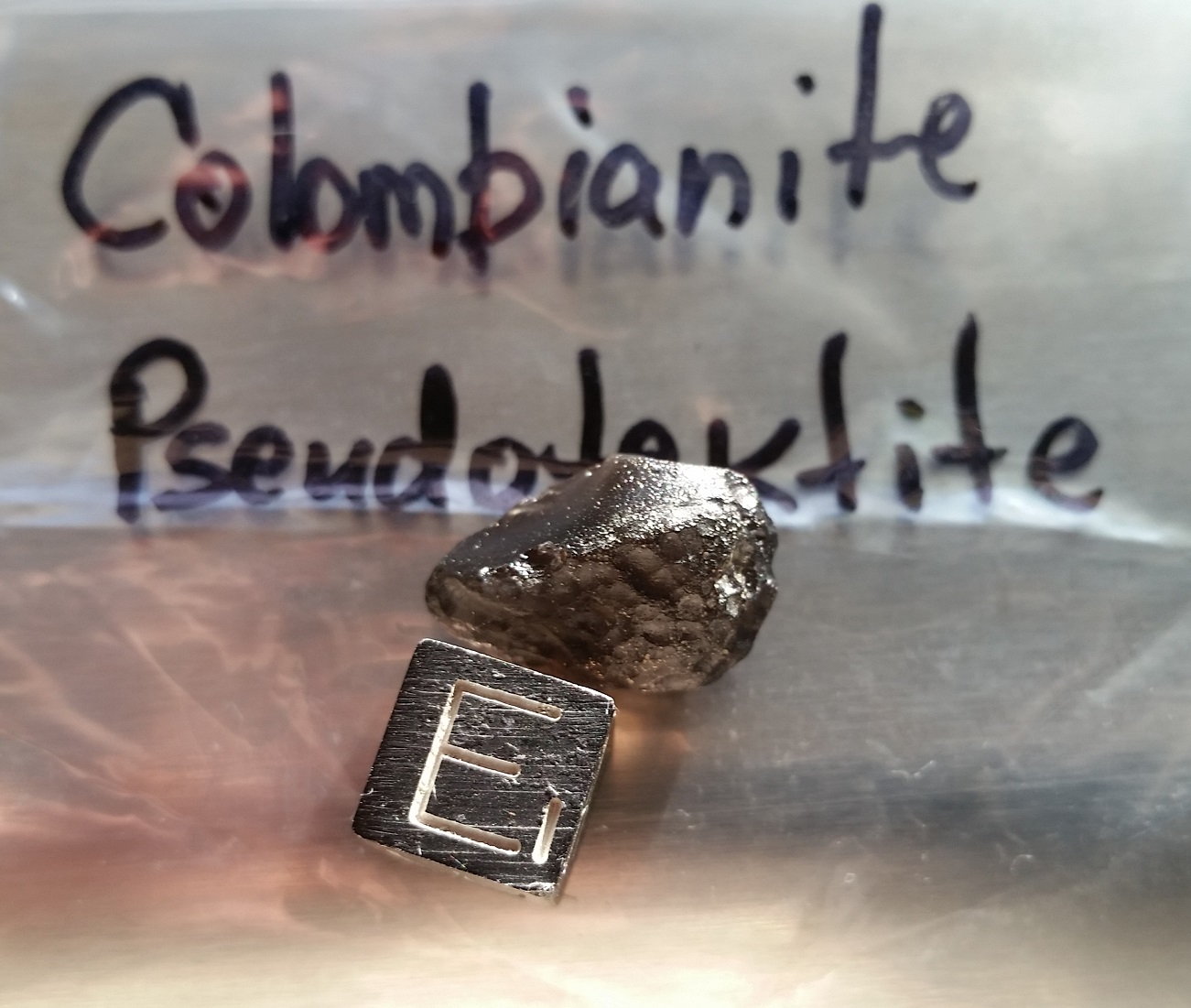 This specimen, as well as many other tektites and pseudo-tektites and impact-glass, were lent to me by our friend and fellow tektite-expert, Norm Lehrman, of the “Tektite Source“. Unfortunately, they weren’t received in time to be included in this article. They will soon be tested, and their results will be in a future article. This particular specimen is highly-collectible because it has a beautiful pinkish-violet color in transmitted light.

Acknowledgements. I would like to thank the editors, Paul Harris and Jim Tobin (of Meteorite Exchange) for access to their vast tektite and impactite collection. Jim Tobin for cutting and torching my samples. Jayson Coate for loaning his Healdsburg obsidian specimens. Troy Bell (of both the Houston and the Whiteside Museums of Natural History) for the loan of Bediasite specimens from their collection. And to Norm Lehrman (of the Tektite Source) for his expertise and his technical insights on future tests that may be applicable to studying these intriguing glassy rocks. Although Norm and Troy’s specimens were loaned too late to be included in this article, the results of my testing of their samples will be acknowledged in a future article.

Pierce, Stephen E., 2002, A NEW METHOD TO DETERMINE THE DIFFERENCE BETWEEN TEKTITES AND OTHER NATURAL (VOLCANIC) GLASSES, an article in “From the Lab”, in Meteorite-Times.

XRF is a non-destructive analytical technique used to determine the elemental composition of materials. XRF analyzers determine the chemistry of a sample by measuring the fluorescent (or secondary) x-ray emitted from a sample when it is excited by a primary x-ray source. Each of the elements present in a sample produces a set of characteristic fluorescent x-rays (“a fingerprint”) that is unique for that specific element, which is why XRF spectroscopy is an excellent technology for qualitative and quantitative analysis of material composition.

EDXRF is the technology commonly used in portable analyzers. EDXRF is designed to analyze groups of elements simultaneously in order to rapidly determine those elements present in the sample and their relative concentrations—in other words, the elemental chemistry of the sample.

Most atoms have several electron orbitals (K shell, L shell, M shell, for example). When x-ray energy causes electrons to transfer in and out of these shell levels, XRF peaks with varying intensities are created and will be present in the spectrum, a graphical representation of x-ray intensity peaks as a function of energy peaks. The peak energy identifies the element, and the peak height/intensity is generally indicative of its concentration.

Ferro-silicon – as well as, Ferro-chrome-manganese – – one of many varieties of Ferro-alloys – – Man-made Material – – “Slag”!

Silicides, in Fulgurites and Ferrosilicon — Unusual Compounds Formed under Reducing Conditions in Nature and Industry

Bob is a retired aerospace engineer living in Southern California, and has been recovering meteorites from the Southwest U.S. Deserts since 1995.
PrevMetal in DaG 1040 CV3
The 2016 Tucson Gem and Mineral ShowNext