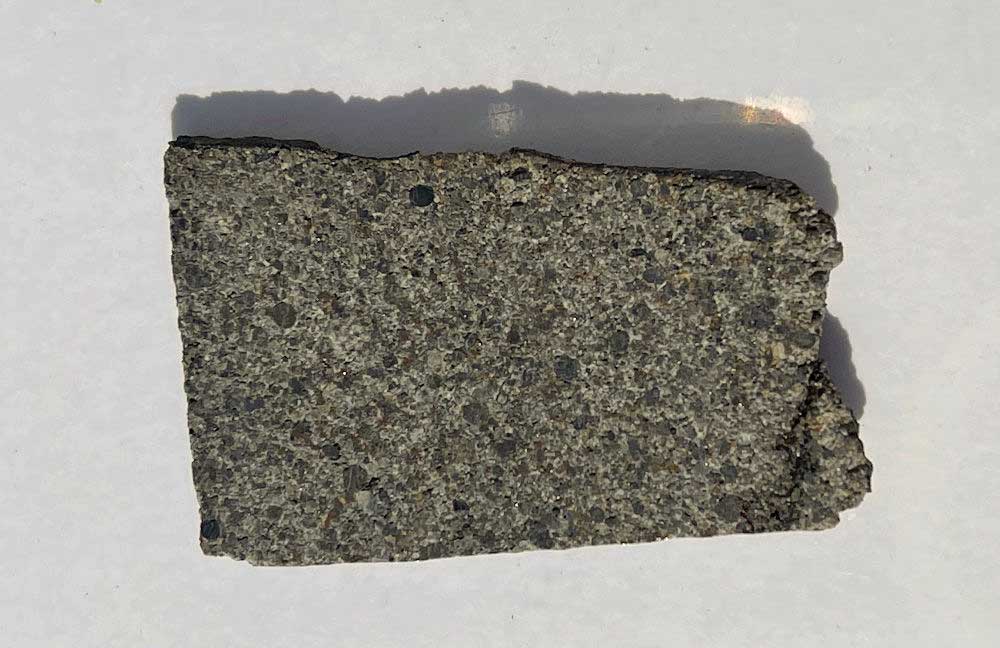 Never had there been a confirmed person being struck by a meteorite. Yes, there were stories and rumors, but none reliable or confirmed, until 30th November 1954, when 34 year old Ann Hodges who was sleeping under quilts on her sofa, in her Sylacauga, Alabama home was struck by a grapefruit-sized meteorite at about 3:00 pm. The 8.5 pound (3.85 kilogram) trespasser from space crashed through the roof and ceiling of the house, then ricocheted off the large wooden radio and impacted her body, causing a large football shaped bruise on the left side of her abdomen. Coincidentally, Ann’s house was across the road from the Comet drive-in theater.

Think about the odds of a person getting hit by a meteorite. Dr. Carleton Moore, Professor Emeritus and former Director of the ASU Center for Meteorite Studies, thought about it and jokingly concluded, “A person has a better chance of winning the lottery, being bit by a shark, struck by lightning and caught in a Tsunami all at once, then being struck by a meteorite.” In Wired magazine, in the December 2018 article “The Mad Scramble to Claim the World’s Most Coveted Meteorite” they calculated the odds of a meteorite landing in a particular spot as 1 in 182 trillion. I don’t know how they came up with those odds, but it sounds like Carleton was not far off.

Shortly before 3:00 pm, moments before Ann Hodges was awaken by the extraterrestrial invader, many saw the fireball overhead and believed they were witnessing an airplane plummeting to earth, while others suspected a Soviet attack. Ann Hodges tried to determine what had happened since the room was filled with dust. She initially believed the chimney had collapsed or a heater had exploded. The police and fire departments were called. With the arrival of emergency vehicles, word spread that the house represented ground zero for whatever had happened.

So many people flocked to Hodges’ house that when her husband, Eugene, returned home from work, he had to push gawkers off the porch to get inside his house. Ann was so overwhelmed by the crowd, so she was taken to the hospital. With Cold War paranoia of a Soviet attack running high, the Sylacauga police chief confiscated the black rock and turned it over to the Air Force who had the Smithsonian analyze it.

Ann became a national celebrity when she was featured in an article in the iconic “Life Magazine” known for its large over-sized format and outstanding photos. Television, radio and newspaper coverage lasted for weeks.

Ann and Eugene wanted the meteorite returned to them. There was one problem, they were renters and the landlady, a recently widowed woman, named Birdie Guy, also wanted the meteorite partly due to the cost of repairing damages to her house. Ann angrily stated, “Suing is the only way she’ll ever get it.” “I think God intended it for me. After all, it hit me!” Guy sued claiming the meteorite was hers since it fell onto her property, and Ann threatened a counter-suit for injuries caused by the space rock. The law was on Birdie’s side, but the famous incident was well publicized, and the public was sympathetic to Ann and overwhelmingly sided with her. Guy came across negatively in the news reports that depicted her as greedy.

After a year, the case was eventually settled out of court with Guy receiving $500, and Ann was to receive the meteorite. Eugene was convinced the couple could make a fortune off the rock and turned down an offer from the Smithsonian museum. Eugene offered to sell the meteorite to the highest bidder above $5,000. $5,000 was already offered by an interested party. By the time the meteorite was returned to the Hodges, over a year later, publicity had diminished, and they were unable to find a buyer. The family then used the stone as a doorstop for a while before eventually donating it to the Alabama Museum of Natural History at the University of Alabama in Tuscaloosa, in 1956.

Julius Kempis McKinney, a farmer in the Sylacauga area, found a 3.7 pound (1.68 kg) piece from the same meteorite fall a few miles away from the Hodge’s home. McKinney was driving a mule-drawn wagon when the mules balked over a black rock in their path. Julius pushed the rock out of the way and returned home. That night after hearing about Ann’s incident, he retrieved the rock and took it home, where his children played with it. Julius sold his stone to an attorney who purchased it for the Smithsonian museum. It is reported that he made enough money from the sale to buy a house and car.

The piece I have originated from the Smithsonian specimen. It was not from the stone that struck Ann, nevertheless, it still was part of this famous historic fall. Some may be hung up with the fact that this is not the “Ann Hodges” hammer stone meteorite, however, this reminds me of my friend, Eric, who was upset because he did not get accepted into Stanford’s joint MBA-law degree (JD) program and had to settle for his second choice – Harvard. I am thrilled to “settle” for a Smithsonian specimen instead of the “Ann Hodges” hammer stone of the Sylacauga fall. 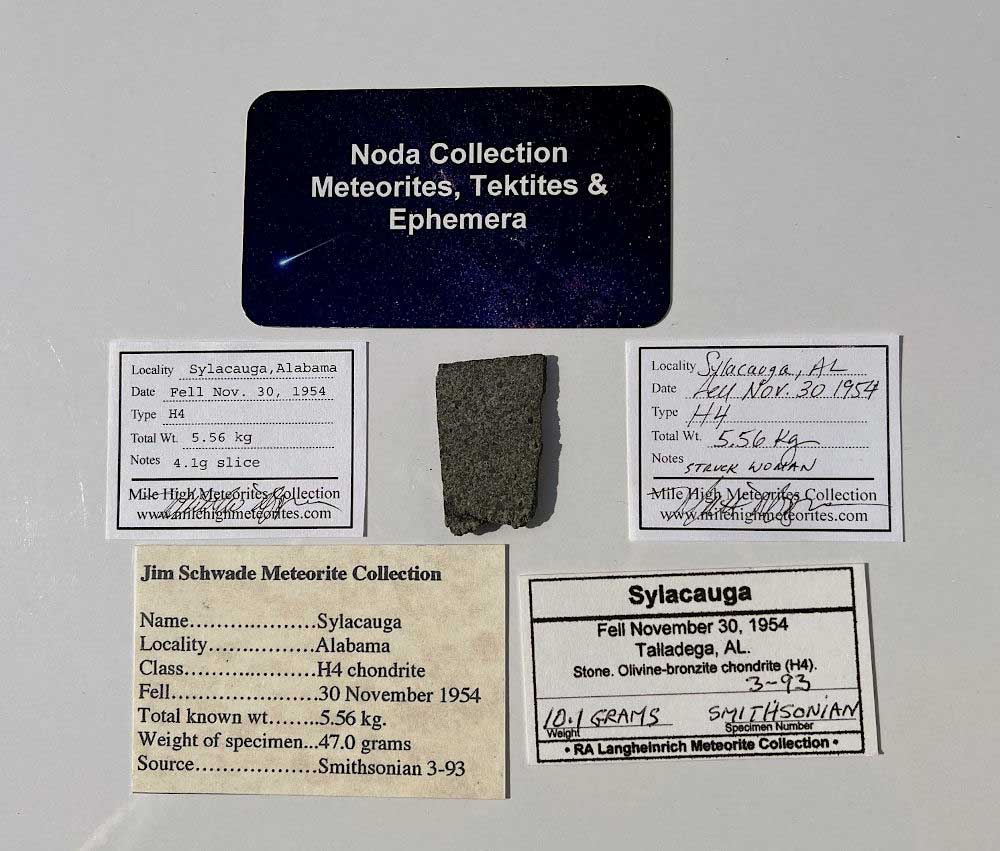 Years after the Hodges moved away, the rental house on Oden’s Mill Road caught on fire, and the Guy family demolished it to make room for a mobile home park. Nothing marks the spot that made meteorite history. There is a monument outside the Alabama Museum of Natural History.

Ann and Eugene were simple country folk, and all the national attention and stress of the lawsuit took its toll on Ann who suffered a nervous breakdown. In 1964, she and Eugene divorced both citing the disruption and publicity of the meteorite as a contributing factor. In 1972, she suffered kidney failure at a Sylacauga nursing home and prematurely passed away at the age of 52. Eugene suspects the stress of the meteorite and frenzy that followed had taken its toll on Ann. He sadly remembers, “She never did recover.”

Perhaps it was best for me not to have obtained a piece from the Ann Hodges hammer stone which seems to have a curse related to the infamous Hope Diamond curse. On the other hand, the Smithsonian Julius McKinney meteorite from which my sample was derived has brought good fortune to those who have possessed it. 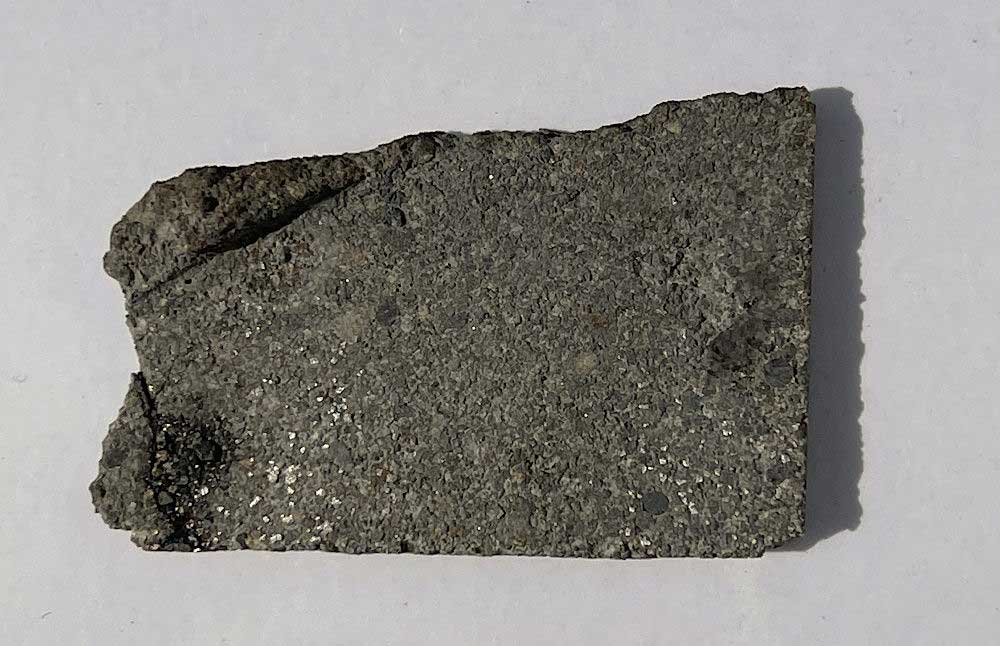 I dedicate this article to my good friend Matt Morgan, who relinquished the Sylacauga meteorite from his outstanding personal collection, so I may realize one of my “bucket list” collection dreams. 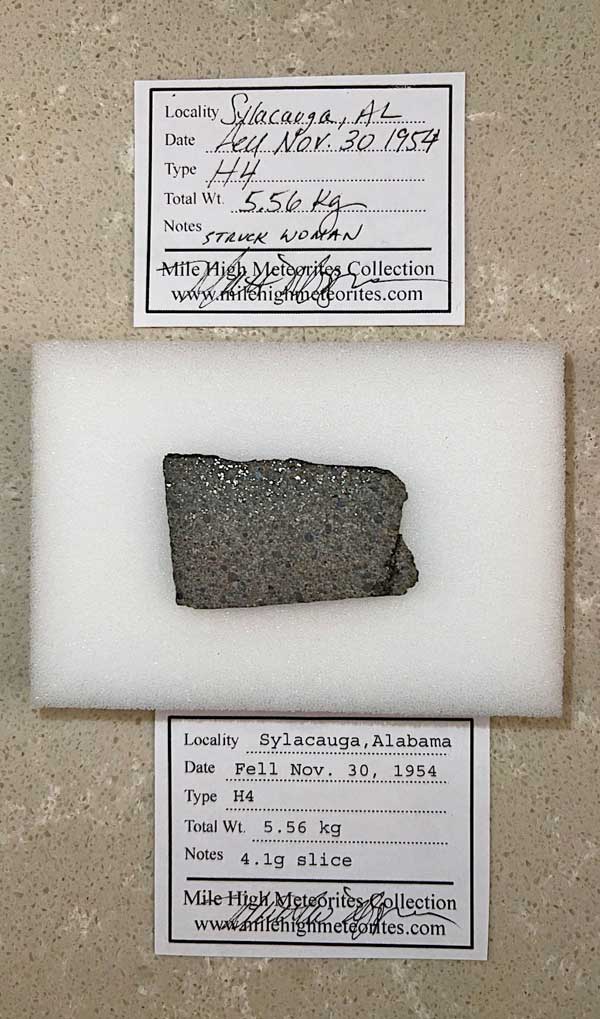 Life Magazine “A Big Bruiser from the Sky” 1954

Wired Magazine “The Mad Scramble to Claim the World’s Most Coveted Meteorite” December 17, 2018.

Mitch has been an avid collector of meteorites, tektites and related ephemera for over ten years. He has been fortunate to have made many good friends while doing it.
PrevCosmic Microscapes – Seeing Into Rocks from Oregon and Space
A Eucrite with ChondrulesNext