Cosmic Microscapes – Seeing Into Rocks from Oregon and Space

An amazing exhibit of meteorite photography has opened at the High Desert Museum in Bend, Oregon. Yes—Bend, Oregon, the largest town in Central Oregon, best known for skiing and other outdoor activities, is also home to a fine museum which is rapidly becoming a major attraction featuring wildlife, culture, art and history. A visitor to the museum today will be greeted in the large entrance hall by huge colorful images made from petrographic thin sections. As the name suggests, there are also local rocks for comparison from the Bend area, Mount Hood and Mount St. Helens.

The exhibition is the result of several years of collaboration between Seattle photographer Neil H. Buckland and Dr. Tony Irving, professor and meteorite scientist from the University of Washington, and a noted expert on Martian meteorites. They met in 2015 when Buckland was hired to photograph a meteorite collection Irving was curating. Irving asked Buckland to photograph some meteorite thin sections. Buckland was unimpressed until he saw them in polarized light. Then he was enchanted. The landscape and portrait photographer, always concerned with revealing detail in his work, often more detail than the unaided eye could see, became obsessed with these new tiny ‘microscapes.’ Anyone who has peered into a microscope at thin sections in polarized light knows they can be stunningly beautiful. It’s easy to get lost in the colors, shapes and patterns that shift with the turn of the stage. Even researchers can forget what they are looking at and why at times. Buckland wanted to photograph meteorite thin sections and display them on a monumental scale without sacrificing the smallest detail. He has accomplished it. With his fine artist’s eye and impeccable technique, he has framed his images for maximum visual impact while keeping the scientific information in the images central. It is a perfect fusion of art and science.

Though the photographs are micrographs, Buckland does not use a microscope in his process. As Irving says, “Neil didn’t know that what he wanted to do couldn’t be done” with or without a microscope. To accomplish his goal he designed and built a custom rig—a micro-panoramic imaging system. It consists of a 10x microscope objective mounted on a DSLR with no ocular and a 2x tube lens, all attached to a heavy metal base to give it stability. It has an automatic drive and a high-precision three axis stage. Buckland photographs hundreds of 2x2mm tiles and stitches them together with image compositing software. The files are enormous and the whole process is extremely time consuming. When the stitching and cleanup is finished, he prints the images in strips that are up to 44” wide. The strips are pieced together and then seamlessly mounted on board. Buckland says he is committed to total honesty in his images and he does not alter them. The largest photograph in the show represents an enlargement of up to 40,000 times actual size.

All the rocks presented in the show are igneous, derived from cooled magma. Lava flows from the inner planets Mercury, Venus, the Moon and Mars, as well as some asteroids, tend to be basaltic. On Earth plate tectonics and the presence of water has led to the formation of other types of lavas. Here, the terrestrial examples are basalt, andesite, dacite and rhyolite. Since Oregon is home to many volcanoes, notably in the Cascade Range, Buckland and Irving decided to focus on local rocks and to compare them not just to asteroidal meteorites but also some from Mars and the Moon. Examples of some of the rock types photographed are on display in the exhibition, including a hand sized Martian shergottite and a golf ball sized lunar mare basalt. Excellent captions explain the origins, mineralogy and significance of each thin section and the techniques used to make and study them.

As Irving explains, a basic problem with viewing thin sections through a microscope is that you can see only a small part of a slide at a time, just a few millimeters wide. Moving the slide to another view causes the first part to be lost. You can move around on a slide but you can’t see the details all at once. With these mammoth prints you can see the whole image and, by moving closer, focus on smaller and smaller areas. There is no pixilation even in the tiniest elements. That is truly remarkable.

The exhibition opened on March 6, 2021 and runs through July 18. It’s not a traveling show, unfortunately, but Buckland and Irving are planning future exhibitions in other cities with different and even larger images.

Author’s note: I, too, am enthralled by meteorite thin sections viewed in cross polarized and plane polarized light. They are so beautiful, so mysterious, so abstract. It seems to me that they should be seen much larger than the small pictures they usually rate in books and online. They are reminiscent of abstract expressionist paintings from the 1960s. Think Willem de Kooning, Jackson Pollack, Frank Stella, and more. Like their paintings, thin section images should be huge, wall-sized, Museum of Modern Art fills-a-room size. Now at last they are. 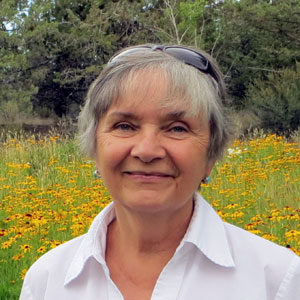 Dorothy Norton Kashuba specializes in scientific illustration for books and journals. Her work can also be found in private collections, museums in the US and abroad and in the garden shop pest control aisle.
PrevTagish Lake Meteorite
Sylacauga “Ann Hodges” MeteoriteNext