Spring Clean Up, Well Sort Of

Not to dispute the old saying, that time flies. But, it just moves along. It is we that have a changing perception from day to day or year to year. But, time itself passes at a constant rate. Unless, I am badly mistaken this is the last month of year ten of Meteorite Times. I think Paul and I realized that we might be offering something that people would enjoy. But, we never conceived that we would reach the 11 year mark when we started. Or that it would seem to come so fast. Oh, sorry I am de-emphasizing the speed of passing  time.

About when we started Meteorite Times is when I “lost” some small Odessa irons that I had gotten at Tucson from a non meteorite dealer. Liked them a lot and thought that I might someday make jewelry out of them. They were really small and suited to placing in a silver cage or as was the fashion a decade ago silver soldering a loop to them. Well, as I said I immediately “lost” them.

I have the word lost in quotation marks since I knew within a few feet where they must be in my garage. The problem was that my grown-up family was needing my garage for storing their stuff as they moved from apartments to houses and so on and over again.

My garage remained in a horrible condition until today. This morning, I finally accepted the challenge of clearing out my old darkroom and the rest of the garage. Getting it set up to become a digital studio and lab has finally made it to the top of my “do it list“. I gave away all my chemical photography equipment a couple years ago. I never cleaned the darkroom up though, which had ages before become part of the storage area. I had maintained a small spot for finishing the polishing of jewelry and meteorites but all around me was hip deep clutter. In the middle of the garage I had maintained another small area with one rock saw and the diamond lap. It has been a pain for a while working in the clutter, but the work itself never suffered. 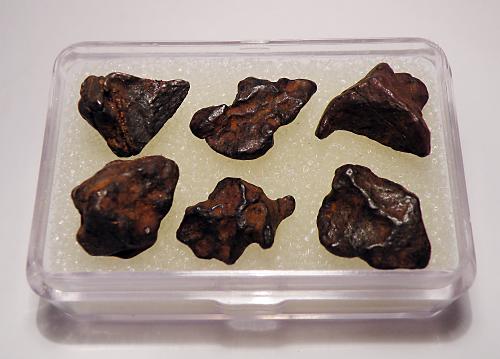 Back to the lost meteorites. I forgot where I had put the Odessa individuals. I knew they were somewhere near that reserved clear spot, or on the bench just outside where my torches are. Today I found them on the shelf above the small clear spot in an envelope. I do not recall even putting them in an envelope. I found many other things too during the clean up. I was however, pretty brutal about throwing stuff away. I got rid of nearly all the electronics related material. I can not imagine sitting down to do much electronics anymore. The meteorites will I think keep me busy enough. I do want to get back to making some jewelry though. I found my old shingle that hung over my bench when I worked at the craft plaza in my 20’s. I made over the years many wedding sets for friends and relatives along with other jewelry. I have made one or two pieces at least every year since just to keep my skills from dulling completely. But, there will be a piece of bench space in the garage for jewelry when the cleaning is over. There are always those pieces of meteorite that are too small or too ugly to sell as a specimen. But they can be made into something really nice when polished and set. I can see my kiln on the floor. I am about two feet from reaching it to see what kind of shape it is in. There is only one light box of stuff sitting on top of it. So hopefully it is ok.

I have picked the two scales that will go into the darkroom or “meteorite laboratory”. The first is a Mettler with a 160 gram capacity that has less ranges to the right of the decimal point then the one in my office but is still very sensitive. For larger work I am sending out a Torbal scale that is good to 2 kilogram. 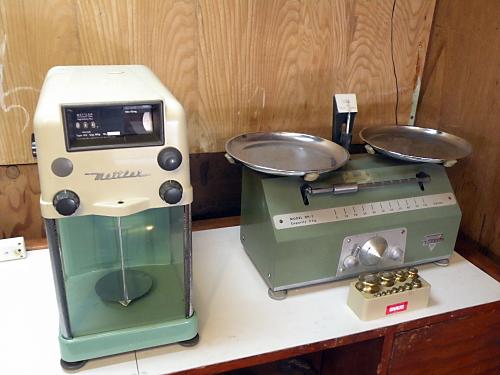 I bought a desktop studio set up last week to aid me in taking pictures. It is a white fabric cube with spring steel in the sides that keeps it popped up. It works like the window shades for cars that pop open. The studio came with two nice lights and a small tripod plus several colored backgrounds. These I will probably not use. I would guess that the meteorites will be photographed with the white background almost exclusively. I have a couple more lights and may employ them as well. I’ll have to do some experimenting to see how much illumination I need for the close up work. I think it more a matter of even shadow-free illumination than more light.

I have cleared out the cabinets and drawers of all the old photo paper. All the related old chemicals have been disposed of. It is ready to go digital except for vacuuming and putting in carpet.

It has been a few months since I first mentioned that the garage was going to be reworked into a meteorite cutting lab. But, I am close now just a few more days. I am writing this early in the month so by the time the issue actually comes out online I should be up and running. Some pieces of equipment have not even seen the light of day for ten years. It will be fun to get them out of their boxes and set up again. Look for more of our beautiful polished pieces of Muong Nong Layered Tektite. They take a long time in the vibrating lap but they are really worth the work required.

Several more days have gone by since the last paragraph was written. Now, the floor is nearly completely cleared and the darkroom has been vacuumed. One of the benches is completely cleaned off. The vibrating lap is moved out ready to put up on the two tables that have just been sitting there disassembled for ten years. Got some of my overheard lights up and working again. Today I was out there for just a few minutes in the morning and I found another forgotten piece of the past. I do not even remember ever having it but it had stuff in it and I must have been the one who picked it up and put it in there. It is the pouch that came with my first metal detector. It must be about thirty-six or thirty-seven years ago that I bought a White Coinmaster. I used it for years and still have it and also my father’s that he got at the same time. There were no meteorites ever found with it but, relics and lots of bullets and coins were found. Ghost towns, and mines were explored with it. As a young man I had great fun with it. For its time it was one of the finest detectors available. It’s a pain to use by today’s standard. In many places where there was black sand in the soil it required constant readjustment of the ground balance. But, it was sensitive and I found a lot of stuff with it. I took it to Gold Basin once and tried to use it there on meteorites. I realized very fast that if I was to be productive as a meteorite hunter I needed to move up to something more modern and automatic. The poor old White has never been used since. But, one of my grand daughters is interested in all things scientific and in having a metal detector; so she may get one of the Whites. 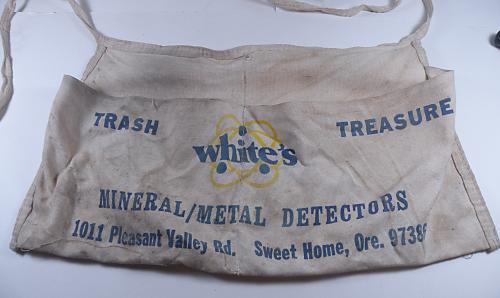 I moved the desk top studio out there this morning. I made a bracket yesterday to hold my camera over where I am going to shoot. I had made a support for one of the big enlargers years ago and had left it attached to the countertop. It was really nothing more than a galvanized piece of thin wall pipe that the enlarger head moved up and down. But, now it will serve as a nice hands free mounting for my digital camera. And as before I can move the camera up and down. It took about five minute for me to braze a couple bolts to a pipe clamp so I could attach a ball head camera mounting that I had laying around. It works wonderful. I will not have to fight the problem of adjusting a tripod and there will be no shadows to worry about. 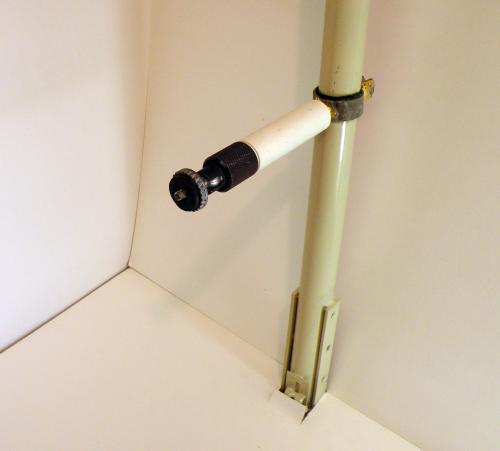 I do not think there are any more surprises waiting in the garage. It is almost cleaned up. Now I just have to get rid of all the trash and junk. There is an electronic waste recycling event down the street next weekend so all the old computers and monitors will go away to that. That just leaves a couple dozen big trash bags of other stuff. It was a good project and speaking as the world’s greatest procrastinator cleaning the garage should have happened long ago.

Until next month enjoy

The Meteorite Exchange, Inc. was born in 1996 with meteorite.com and Meteorite Times Magazine in 2002. Still enthusiastic about meteorites and all things related to them, we hunt, collect, cut and prepare specimens. We travel to gem shows and enjoy meteorites as much now as in the beginning. Please feel free to share any comments you have on this or any of our other sites.
PrevThe Whitmire (South Carolina) Bolide of February 13th 2012 The search for meteorites from this fireball-meteor still continues.
Chantonnay: 200 Years and One Fine PersonNext