From the ruins near the Arizona Crater to the unknown building that now belongs to a Hotel.

Harvey Harlow Nininger (1887 – 1986), a name that marked the history and direction of meteoritic science in the world. He was a meteorite enthusiast in North America and with his love and dedication he also aroused passion, as well as scientific interest in the meteoritic field.

His career as a self-taught and self-funded scientist was unique. He left his mark and his legacy wherever he went, doing in addition to fieldwork, extensive work on the dissemination of meteoritics, speaking at hundreds of colleges and universities, primary and secondary schools, talking on street corners and with anyone interested in meteorites. During his 47 years as a meteoriticist and educator he had a vast scientific production, which included 162 scientific articles and 10 books on meteorites. In this way, Nininger has become the largest private meteorite collector in his time, being considered the father of modern meteoritics and a world reference.

As great admirers of this entire legacy, two Brazilian scientists, Amanda Tosi and Betty Zucolotto, who work with meteorites at the Federal University of Rio de Janeiro, ventured down the beautiful roads of Arizona retracing the paths of Nininger during their trip in 2019, including the two landmark buildings that housed Nininger’s museum and his old home in Sedona. However, the location of his second museum building was until then, a mystery.

The first mandatory stop was visiting the magnificent Barringer Meteor Crater, one of his famous books is Arizona`s Meteorite Crater, released in 1956. Nininger devoted long years studying this remarkable feature on Earth, including the conditions that formed it as well as diamonds found frequently in Canyon Diablo meteorites, which may have been formed at the instant of impact, and the discovery of the presence of impactites on and in the crater rim.

Located on the famous old Route 66, just a few kilometers north of the Barringer Meteor Crater, Nininger had founded his first museum, the American Meteorite Museum (1942 – 1953), to house and exhibit his large collection weighing around 8 tons. As he said “Our museum was small, the collection large”.

The building was situated on a small bluff just off a lonely highway, looking across the crater from a distance of five and one-half miles, as described in his book – Find a Falling Star. It had an interesting structure faced with natural flagstone, with a heavy square tower jutting against the sky, where tourists used to climb for a view of the crater. Indeed, the presence of the crater was the criteria for choosing the first location of the Museum. However, surrounded by uncertainties and at the same time hope for the future, Nininger moved his precious meteorite collection from Denver to the location in Arizona.

Brazilian meteorites were also part of Nininger’s rich collection, as his interest was not limited only to those found in the USA, but also to specimens found in different parts of the world. Nininger, knowing that the National Museum of Rio de Janeiro held the largest collection of meteorites in Brazil, (mostly Brazilians meteorites), in 1951 he sent a letter to the curator of the collection, Walter Curvello, in order to propose an exchange between meteorites from his collection for some Brazilian meteorites, specifically Casimiro de Abreu and Pará de Minas (previously referred to in a letter as Palmital). Below, are copies of the letters exchanged between Nininger and Curvello.

However, due to financial problems and the change of the famous Route 66 in the mid-1950s, the Nininger`s museum moved to Sedona, also in Arizona. Today there

is only a ruin of what was the building that housed its first museum, in which visitors to the Arizona Crater, when passing the long and lonely Meteor City Road, admire the beautiful desert scenery in its surroundings.
During our trip it was only possible to admire its beautiful ruins from a distance, without being able to get close and try to feel the meaning this place for meteorite lovers. To speak the truth, we even considered jumping the fence, but the fear was greater than the feeling of adventure. Luckily, years ago Betty enjoyed this moment and shot a picture pretty close of this masterpiece of time.

Following the journey and now, seeking the second building that housed the Nininger`s museum since 1953, the next stop was in Sedona, approximately 71 miles from the Crater. Sedona is another city in Arizona and it is an attraction in itself, with its charming streets, shopping malls and cozy stores and restaurants, surrounded by the great walls of canyons and pine forests.

Unfortunately, the second building of the American Meteorite Museum (1953 – 1960), after the sale of its collection and its closure, became an art gallery for a while, and since then, almost nobody else knew of its location. So, based on just a few photos available online, Amanda kept looking around the city, while Betty headed to the Sedona Heritage Museum, searching for more information. The first clue reached was regarding the house, where Nininger lived with his Addie after the museum closed. There, Betty also got more pictures of the museum building frontage, found in Nininger’s book Find a Falling Star. Nevertheless, an important detail in this source may have contributed to the loss of knowledge of the museum in Sedona, because the photo subtitle on page 223 says: “American Meteorite Museum, opposite Meteor Crater on Highway 66 in Arizona”. This misinformation probably led many people to not find the museum in Sedona.

Thus, the next step was searching for his house located on Meteor Drive, according the coordinates from the

Heritage Museum. This took us to the Jordan Road and then AZ-179 to get to the Canyon Drive, in just 5 minutes the light blue house, with a Historic Landmark plate from the City of Sedona, was found.

In this neighborhood, we started asking around about the old museum. Very few city residents knew any information and only after approaching a postman it was possible getting a more precise direction to start the search for the building. Following the given geographical orientation and based on an old picture of the museum surrounded by the mystical and incredible landscape composed by the famous Red Rocks formed by sandstones, the old and last museum of Nininger, which housed its beautiful, rich and vast collection, was found.

The mission of finding it was not easy, as it was necessary to pass several times on the same State Route 89A, looking closely at every detail of the buildings and the landscape in the background. However, the effort and dedication, to finally find out if there was any trace of its construction, was rewarded by identifying a structure with the landscape identical to the one in the photo. Today the building belongs to the Best Western Plus Hotel and has 3 suites available for lodging, however, the hotel does not have this important and historical information. The great and, at the same time, a subtle detail for the building to be found from the photo, is that the hotel maintained the high column of the frontage, which made it possible, along with the relief, to identify the old museum. For those who want to visit the two buildings in Sedona, the map below shows the small distance between them.

From the moment we found it, a set of feelings such as excitement and satisfaction came over in both of us, and obviously that moment would have to be registered and eternalized through many pictures.

Thus, when traveling through Arizona, it was impossible not to make these beautiful historical records, which refers to where it all started as fieldwork, which inspired hundreds of scientists and meteorite lovers around the world and today they act as true hunters. Currently, the total number of meteorites registered in the Meteoritical Bulletin Database is 63,733, which shows the importance of Nininger’s pioneering work of not only going to the field to hunt meteorites, but all of his dissemination work, as most meteorites are found by residents of the fall region.

In this way, our intention is to disseminate not only the entire legacy of Nininger to meteoritic science, but also not to let die the traces of where his whole history began, where until today he inspires us to talk about meteorites with children and young people who will be future scientists, to teach people how to recognize a meteorite, to go to the field in search of meteorites and, above all, inspires us to never give up.

All pictures are the property of M-E Zucolotto. 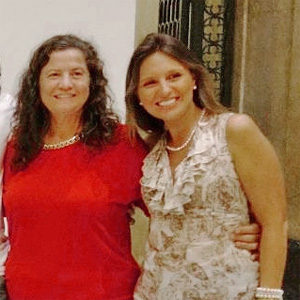 Mary-Elizabeth Zucolotto (left) and Amanda Tosi (right) - - - Mary-Elizabeth Zucolotto, often called Betty, is the curator of the meteorites Collection of the Museum of Rio de Janeiro, she told us in an article published here in March 2019 about her efforts to save as many meteorites a possible during and after the fire that engulfed the Museum in September 2018. - - - Amanda Tosi is Betty’s assistant, a microprobe operator for the Museum, and a PhD candidate. She also helped Betty during the aftermath of the fire.
PrevThe Unknown Jerome (Idaho) Meteorite
NWA 8781 C-ungrNext