In this edition we were supposed to continue our orderly survey of the classic morphologies of the Australasian tektite strewn field, next moving on to the spectacular world of Australites.

There has been a change of plans. We must revisit the irregular Philippinites that I have (very informally) termed “Amagorphians”*. In the last column, I declined to speculate on the origin of these strange zoomorphic monstrosities that have been celebrated since the days of H. Otley Beyer. I relish identifying a new tektite mystery for which I have no immediate explanation. As the ancient mapmakers sometimes wrote in the blank places in their global maps “Here there be monsters!”

Before the ink was dry on my last column, I realized Beyer’s “irregulars”, the pieces he individually named “the animal” and “the monster”, and my “amagorphians” were conspiring together to tell a story that would challenge the very concepts behind the geocaricature that introduces each segment of this series. This may well be a very flawed fictional cartoon if we listen to these odd rocks (which cannot lie; it is only for us to misunderstand). I know as I write this that I am going to have to draw another version of my tektite grand unification concept. This picture is wrong.

A whole bunch of mysteries are addressed by what you are about to read, or more precisely, by the implications of the observations. This column will be more meaningful if considered in combination with my previous discussion of Muong Nong-type tektites (see my Meteorite Times column of 1/2017. Futrell always maintained that the Muong Nongs have a key story to tell and I keep thinking he’s righter and righter).

Figure 1 is a repeat from my Philippinite column in the last edition. As I prepared that image, I felt I was seeing something familiar, and even before that article went to press I knew what it was. Amagorphians are densely welded Muong Nong-type Philippinites. They did not travel a thousand kilometers as some sort of projectile from Southeast Asia. They are at home. (My earlier referenced article explores this idea). There was another atmospheric impact and aerial burst somewhere very near the place these formed. Philippinites are one part of a constellation of coeval aerial bursts and their various impact products.

This model suggests we can’t find the Australasian crater because there never was one. There was a Shoemaker-Levy like shotgun blast of low-strength (cometary?) material that fragmented and refragmented in a succession of aerial bursts that were not crater-forming. They did, however, in their towering mushroom-cloud explosions, vacuum all soils and loose rock from the face of the earth below, and drawing them into blistering fireballs, gave rise to what were in many cases quite local, but essentially simultaneous tektite events spanning a huge global area.

Consider figure 2. These are all Laotian Muong Nongs, with evident layering, and a great deal of fine vesiculation.

I believe the vesiculation is a manifestation of interstitial gasses that were expelled as the initial glassy “ash” welded and pore spaces collapsed. Large shrinkage cracks formed as a further consequence of the volume loss attendant with welding.

Figure 3 provides a side-by-side comparison of a Philippinite irregular and a known Muong Nong. While visually very similar, there are subtle and informative differences. Note that the shrinkage polygons and the cracks that define them are more pronounced in the Philippinite. With postulated denser welding of the Philippine amagorphians, it follows that shrinkage will be greater, resulting in bolder shrinkage features. Denser welding might also anneal away much of any layering that might have been formerly present.

There is something very liberating when we move from a hypothesis of a single impact with no evident crater to a constellation of aerial bursts scattered over perhaps a third of a hemisphere, each individual fireball yielding its own characteristic (but similar) products. Beyer’s Philippinite “irregulars”, (my “amagorphians”) are densely welded Muong Nong-type tektites.

Discerning readers might fairly ask just what about the amagorphian story deserves this column’s sudden turn that so rudely interrupts our tidy tripartite visit to the Australasian tektite classics. It is this: I have previously written that there is reason to believe that each significant Muong Nong locality represents the location of a nearly overhead aerial burst (see my Meteorite Times column for January, 2017). If that interpretation is correct, then the Philippine amagorphians—if they are Muong Nongs as here argued—imply one or more aerial bursts over the Philippines (and the Rizal Privince in particular).

I believe layered tektites have been previously reported from the Philippines, but their significance had escaped my attention until the amagorphians spoke their bit. This has such fundamentally important implications, that my introductory sketch, so elegant in its simplicity, is now in grave doubt.

There was no grand singular Australasian tektite event. There is no big crater. Philippinites were not projectiles ejected from a place somewhere far away in southeast Asia. They were part of something both much smaller and much larger. The amagorphians were spawned by a local event that was a part of a near-simultaneous firestorm of something on the order of a hundred aerial explosions peppering an area over 1000 miles in diameter.

Most investigators (including myself) have been thrown off the track by the coeval ages of tektites throughout the Australasian “strewn field”. The logic was that they fell out of the sky, they were compositionally similar in certain key attributes (like low water content), they appeared to be the same age, and therefore, they must be part of the same event. So far, so good.

But here is where most got it wrong. The “same event” in no way requires a single big impact. I am proposing a scenario where a large, structurally weak bolide (maybe a comet), fragments very high in the atmosphere, commensurate with its fragile character. A constellation of over a hundred fragments 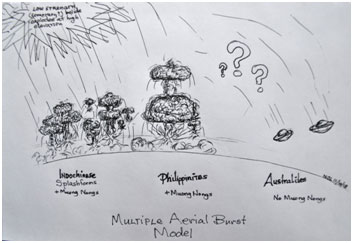 continued, but did not have sufficient structural integrity to penetrate the denser atmosphere, each exploding as monster aerial bursts (Tunguska-like, maybe on steroids?)

The more appropriate geocaricature now looks like the associated sketch. My former big impact has been obliterated as if by nuclear holocaust. My tidy, orderly placement of Australites in the grand scheme is gone. We now have to rethink the source of the far-traveled Australites. I have some ideas already brewing for the next edition.

*”Amagorphian” is my own ultra-informal term for the peculiar “irregular” Philippinites that often show zoomorphic shapes and features formed by deep shrinkage-related ornamentation. It has no scientific standing, nor should it. Whoever proposed the term should sharpen his crayons.

Norm Lehrman is a recently retired exploration geologist with over 45 years experience. His career involved fieldwork in over 35 countries on every continent except Antarctica. While stationed in Australia, Norm and his wife, Cookie, became interested in collecting Australites, which ultimately led to a generalized passion for tektites, impactites, meteorites and related materials. In 1999 they founded the Tektite Source business (www.TektiteSource.com) which has evolved into one of the world's premier providers of tektite and impactite specimens. Norm has retired to a ranch near Spokane, Washington, where they continue to serve tektite aficionados worldwide.
PrevCAIs in FERMO: an unusual aspect for ordinary chondrites
Serra de MagéNext