A thankful Californian remembers his mentor. 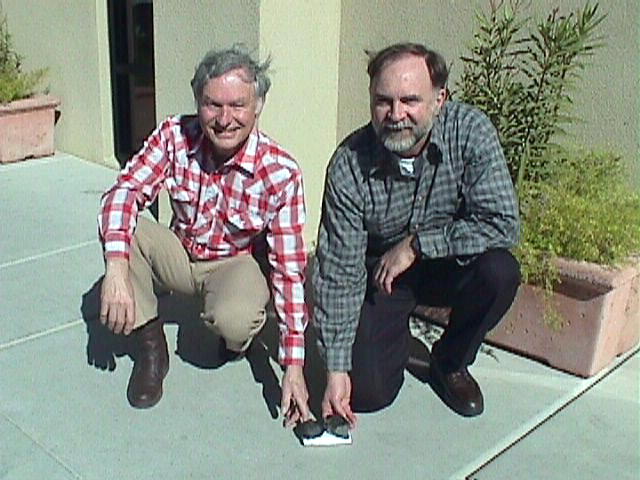 I remember the first time that I met O. Richard Norton. It was February 2000 and it was during the first Tucson Show that I ever attended. In fact, I had just arrived in town and it was my very first stop. Standing right there in the lobby of the hotel where I was staying was the man whose book (Rocks From Space) first introduced me to the study of meteorites. It was my “mentor”, Richard, with his wife Dorothy.

Having seen Richard’s picture in his book, I had the advantage of knowing what he looked like, so I went up to him and introduced my self. Yet, as Richard introduced Dorothy to me, they immediately put me at ease. They so warmly received me that I felt I was a friend of the family (of meteorite lovers).

When I first walked up to Richard and Dorothy, I had the distinct impression that they had somehow recognized me even before I introduced myself. After all, this was early in the year 2000, and the news of my finding the Mars meteorite (Los Angeles) was still the latest buzz in this corner of the meteorite world. But as we conversed, Richard divulged that he has been communicating with Ron Hartman and Ron Oriti, and has been following the progress of our field work with California strewn fields and, in particular, with the Lucerne Valley meteorites. And as we continued to talk about other various California meteorites, I realized that Richard has had a lot of involvement (even if only in the background) with meteorite finds from California, and with meteorite-hunters from California.

Of course, the subject of our discussions eventually turned to the hot-topic at that time – my recent finding of the “LA Mars Rock”, the first shergottite found in North America and the first achondrite found in California. And, of course, Richard had many questions to ask.

As our conversation continued it became more technical. Richard’s keen interest in the petrology of meteorites soon had him asking me questions regarding the fabric of the Mars rock, such as, the size of the crystals, and the effects of shock on the pyroxene and plagioclase/maskelynite gains, etc. Not sure that I was adequately answering his questions, I finally asked Richard that, if he had the time, I could go and get the LA meteorite so that he could examine it first-hand. I’ll never forget the look on Richard’s face as he came to the realization that I had brought Los Angeles with me to Tucson and that he would soon be holding a piece of Mars in his hands. Not just one piece, but two!

One of the more memorable moments in my life was when I placed the two LA stones into hands of O. Richard Norton. (See the above image.) The smile on Richard’s face spoke volumes.

As the years quickly went by, it would be only by chance-meetings at the Tucson Show (just like this first one) that I would get to see Richard and Dorothy. And every time that we would run into each other, Richard would give me the same greeting, “What rock do you have to show me this time?” making reference to our first meeting.

The sad news of his passing reached me while I was hiking on Lucerne Dry Lake in California’s Mojave Desert. While taking a break from searching for meteorites, I decided to check my Blackberry cell phone for email messages. My Inbox was unusually full. Then I noticed that most of the messages had the subject “Richard Norton”, and immediately my heart sank. I chastised myself for making such a negative assumption. But, as I opened the messages, my worst fears were realized.

As I read all the condolence messages I, too, reflected on how the life and works of O. Richard Norton had come to influence my life. Then I remembered that Richard had actually hunted for meteorites on this very same Lucerne Dry Lake (in the company of his colleague, Ron Hartman). I can’t explain it, but at that moment I felt close to the spirit of Richard, and I felt that this was the right time and was the appropriate place to pay my last respects to Richard and to reflect on how his life’s work had changed my life. And I thanked him for many things.

I thanked Richard for making that decision early in his life to come to Southern California (UCLA) and study astronomy under the great meteoriticist Frederick C. Leonard at UCLA. That decision put into motion the changes that we see today and will continue to see into the future as the study of meteorites moves out from academia and into popular science. Richard recounts those early days in articles that are published in the popular journal, Meteorite, “Personal Recollections of Frederick C. Leonard, Part II”. What Richard omitted from his article was that it was Leonard’s suggestion that he change his name from Richard O. Norton to O. Richard Norton. As I read those articles it became clear to me how the bonds he formed with his classmates, Ron Hartman and Ron Oriti, would result in a life-long collaboration. This collaboration would help put the Southwest U.S. into the forefront of popular meteorite science. All three of Leonard’s prize pupils went on to become planetarium directors, all with world-class meteorite collections that were always on public display.

I thanked Richard for rediscovering his early passion for meteorites after the age of 50, so that by the time I was in my 50’s, I had the chance to read his books Rocks From Space and The Cambridge Encyclopedia of Meteorites, all which combined to change my life for ever. Because of these books, and coupled with my ability to study first-hand the meteorites that were on display in the planetariums where he and his colleagues were directors, I have to give credit to Richard for every meteorite that I have ever found.

Among all of us who love meteorites, Richard had a unique ability to interpret for a lay person the arcane of an esoteric science. The location and timing of his presence here among us was crucial to introducing an increasingly curious public to the world of meteorites. All of which made him a foundation of the Meteorite Community. And it is for these very same reasons that he will be sorely missed. In our grief, I hope we can each resolve to keep Richard’s spirit alive in our own lives. That will be his greatest legacy.

Bob is a retired aerospace engineer living in Southern California, and has been recovering meteorites from the Southwest U.S. Deserts since 1995.
PrevIMCA Insights – November 2009
2009 Meteorite VacationNext