Norm’s Tektite Teasers: (Part three of three): The Austral Part of the Australasians 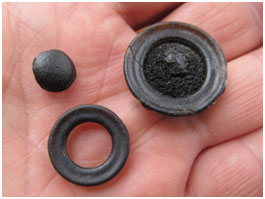 In this edition we conclude our survey of the classic three or four morphologies of each part of the Australasian tektite strewn field, now moving on to the world of Australites.

Australites! These were the stones that ignited my passion for tektites. One of my favorite activities on this planet involves wandering the dry lakes of the Australian outback looking for these little black rocks.

In the last column, I suggested that I was presenting a case that could challenge the very concepts behind the geocaricature that has introduced each segment of this series. I now believe that the picture is wrong. It presumes a singular Australasian impact that produced all of the contemporaneous Australasian tektites of

whatever flavor. (See my recent articles on Muong Nongs). Happily, there is something to be salvaged from the introductory sketch: the right hand “Australite” part is still consistent with the concept that these tektites truly did come flying in from someplace far away. All Australites show the effects of thermal ablation due to atmospheric transit.

In parts one and two of this series, the following classic forms were suggested for other regions:
for Indochinites: patties, teardrops, and dumbbells, (all splashforms), and for
Philippinites: large bald spheroids, soccer-balls, and “bikolite-type” spallation shells.
In each of these cases, the selected forms reflect high abundances.

With Australites, there is an unrivaled champion, the Flanged Button, but it most assuredly does not draw fame from its abundance. Cookie and I have personally picked up over 2000 Australites. Neither of us has yet found a complete flanged button. But if our challenge was to represent Australites with only one morphology, these lovely little flying saucer forms would be the choice. Darwin made room for one of these on the Beagle.

There is a logic to this beyond the aesthetics of a pretty face. Flanged buttons are at the center of a size-related morphological trinity. The special stones that became flanged buttons began their dive into Australian atmosphere about the size of a child’s marble or a little bigger. A film of molten glass streamed off the frontal surface in the blowtorch wind. The glass wrapped around the trailing edge, drawn in by a protective eddy. A flange formed and within a very narrow size window, the flange survives (at least until impact!)

Larger or smaller primary spheroids suffered different fates. Those smaller than the flanged button range ablated towards oblivion. Any flange that may have once formed detached or melted away onto the slipstream. The remnant form is a tiny lens that was left of the button in the middle of a flanged button. These are the most abundant Australite morphology, and are my second nominated classic form.

Larger primary bodies (up to about the size of a chicken egg) were thermally unstable. They began their atmospheric plunge chilled to the heart with the cold of near-space. Nearly instantaneous frictional heating expanded the frontal surface more quickly than heat could equilibrate, and flakes exploded away. By this process, a third Australite classic came to be, the Thermal Ablation Core.

A fourth form should be added to represent another dimension in Australite variation. The three shapes discussed above involve variations due to the size of the primary spheroid. Spheroids were 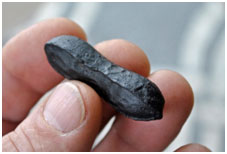 clearly predominant, as they were in the Philippinites, but there were other less common primary forms—dumbbells and teardrops for example. These were subject to size-related laws of thermal ablation as were the orbs, and this gave rise to flanged teardrops and dumbbells and the consequential forms of larger and smaller size. I have chosen a nice “peanut” to represent Australites descended from non-spherical primary bodies.

It has been interesting to think through these nominations for membership in a set of ten or so stones to represent the three main divisions of the Australasian tektites with must-have classic forms. There is an endless list of desirable oddities and rarities, but these described are certainly among the basic set for any collection hoping to represent Australasian tektites.

I would make one change in the stones of the “classics” series. I would add Muong Nongs to the Indochinite ensemble. This addition is due neither to abundance nor aesthetic beauty. If the late Darryl Futrell was still around, we would be soul mates regarding Muong Nongs. They hold the key. Muong Nongs join the elite list for their perceived significance to the story.

Norm Lehrman is a recently retired exploration geologist with over 45 years experience. His career involved fieldwork in over 35 countries on every continent except Antarctica. While stationed in Australia, Norm and his wife, Cookie, became interested in collecting Australites, which ultimately led to a generalized passion for tektites, impactites, meteorites and related materials. In 1999 they founded the Tektite Source business (www.TektiteSource.com) which has evolved into one of the world's premier providers of tektite and impactite specimens. Norm has retired to a ranch near Spokane, Washington, where they continue to serve tektite aficionados worldwide.
PrevChile Rocks!
NWA 7203 AngriteNext