The National Science Foundation (NSF) has funded world-class telescopes and astronomical instruments in Chile for decades, and the discoveries that have been made have helped to reform our views of planetary formation, black hole dynamics, and solar system processes (to name just a few). But what about meteorites?

In June 2018, I traveled with eight other educators as members of the NSF-funded Astronomy in Chile Educator Ambassadors Program (ACEAP). Over 10 days, we received extensive training on the science, technology, education, and public outreach activities being conducted at the Cerro Tololo Inter-American Observatory (CTIO; 7500 ft above sea level), the Atacama Large Millimeter/submillimeter Array (ALMA; 16,500 ft above sea level) near San Pedro, and three tourist observatories (in Santiago, Vicuña, and San Pedro).

But it was in San Pedro de Atacama that I realized there’s more to Chile than big telescopes. You see, I started my career in Astronomy but in graduate school, I was drawn to Planetary Science, and I have since built my career by studying lunar samples brought to Earth by the Apollo astronauts. Lunar glasses and the effects of impacts are now the focus of my work. So when we visited the Museo del Meteorito, I was pleasantly surprised to see such a wonderful place chock full of space rocks.

Since 2012, the museum has been situated on the outskirts of San Pedro, about a 10-minute walk from the main shopping and dining area. Two non-descript connected domes (Figure 1) house about 80 meteorites that have been found in the Atacama Desert. There is an audio tour as well as descriptive displays that describe the meteorites, how we know what we know about them, and why they are valuable scientific objects. Meteorites and jewelry made from them are for sale and the prices are reasonable. On the day of our visit, Rodrigo Martínez, the director of the museum, was there to talk to us about the facility and its meteorites.

More than 3000 meteorites have been found in the Atacama Desert since the late 19th century and classifications include almost every kind of meteorite in the world’s collections. Details on recent searches and finds can be found in Muñoz et al. (2007) and Gattacceca et al. (2011). The most recent scientific expedition occurred in 2017 and included participants from France, Chile, Argentina, Iran, and the United Kingdom. In nine days, these meteorite hunters collected over 600 meteorites! Even though they have been weathered by the desert winds, these meteorites can provide important clues to the age and origin of our solar system and its planetary inhabitants.

The visit to the Meteorite Museum was less than two hours of our 10-day expedition to visit astronomical observing sites in Chile, but as the lone planetary scientist in the group of ACEAP participants, I was drawn to the beautiful space rocks (Figure 2). I really enjoyed visiting the telescopes (Figure 3), learning about the cutting-edge scientific discoveries that are happening, and gazing up at the pristine dark skies. But thinking back on the trip now, I am reminded that we need to look up – and down! – to truly appreciate and understand our place in the Universe. 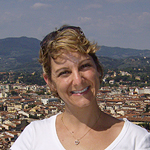 I am a professor of physics at Albion College (Albion, MI) where I teach introductory and advanced astronomy and physics courses and regularly mentor undergraduate physics students. During the 2006-2007 field season, I was a member of the Antarctic Search for Meteorites (ANSMET) team, and in 2018, I was named Albion College’s Arthur Anderson Teacher of the Year. I truly value the ability to communicate scientific results to students and others and annually speak to thousands of people. NASA and the NSF currently fund my research projects related to the Origins of Life (i.e., Astrobiology) and focused on understanding the impact history of the Earth-Moon system and how those impacts affected the conditions for life on Earth. Follow me on Twitter at @astrodiva.
PrevTissint Martian (shergottite)
Norm’s Tektite Teasers: (Part three of three): The Austral Part of the AustralasiansNext