Tektites – one of the most enigmatic things on Earth…
by Roman Davidov from the April 2005 Issue. 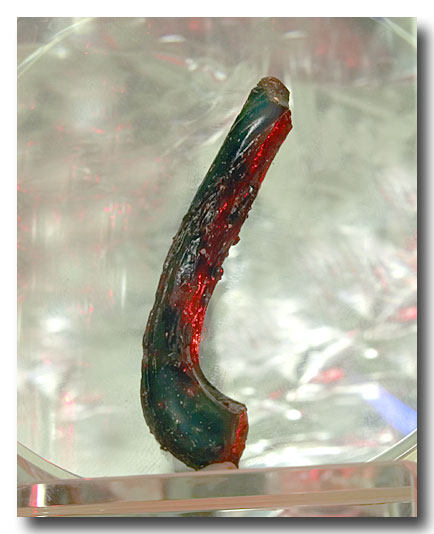 Tektites – one of the most enigmatic things on Earth. From a few titles, having came to us through the deep antiquity: The black stones of The God Of Thunder, fire arrows, moon or solar stones, follows the sacred beliefs of our ancestors in divine origin of these stones, it connection with mystical, supernatural forces. Tektites-Irghizites are the one kind of tektites, situated directly in meteorite crater, thus, by that fact; it takes particular place among the other kinds of tektites. Undoubtedly, people lived in ancient times on the shores of the lake, which was meteorite crater Zhamanshin, believed that these strange black stones, like frozen tar, are connected with the beyond. Many confirmations of those facts were found during archaeological excavations of Palaeolithic stands on the crater swells – former coasts of the lake. Most probably that Irghizites served as amulets for protection against malicious spirits, for healing from different illnesses. Usually stands are founded near outlets on surface of tectites and impactites. The age of different stands, located in the crater fluctuated in limits of 10 – 25 thousands of years (later Palaeolith).

The morphological characteristics Irghizites are subdivided into two groups: 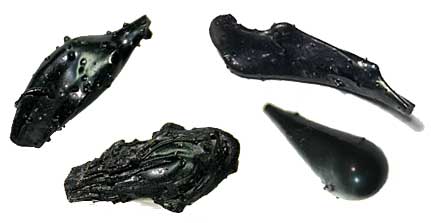 a) samples with the brilliant remaining surface

b) samples with weathered surface.

These two groups unite a number of types:

2.Flat and stretched drops and fragments with fibrous surface with glued small droplets.

3.Samples with fibrous and jet surface, flat and stretched without glued droplets.

Surface of the major part of Irghizites complicated with numerous additional formations. They can be divided on positive and negative: first – the result of growth and formation, second are formed at their destruction.

a) The numerous glass balls, which were stuck, or seized earlier and now slightly break out on a surface. In some zones of surface it makes it hilly. Quite often on large balls (0.5mm) much smaller balls (0.001mm and less) are sitting. In other cases balls stick to threadlike sparks. Probably the sticking together of some balls took place in a liquid condition, others – in viscous, in the beginning of hardening, when a firm film began forming. Formation of a peeling zone in a place of contact of particles, but absent in other places,
confirms that fact. Chemical composition of balls does not depend on their size, and practically in 100% is identical to the composition of the Irghizite, which they are forming.

b) Threadlike sparks and jets, which witness about hardening of irghizites from very liquid condition. 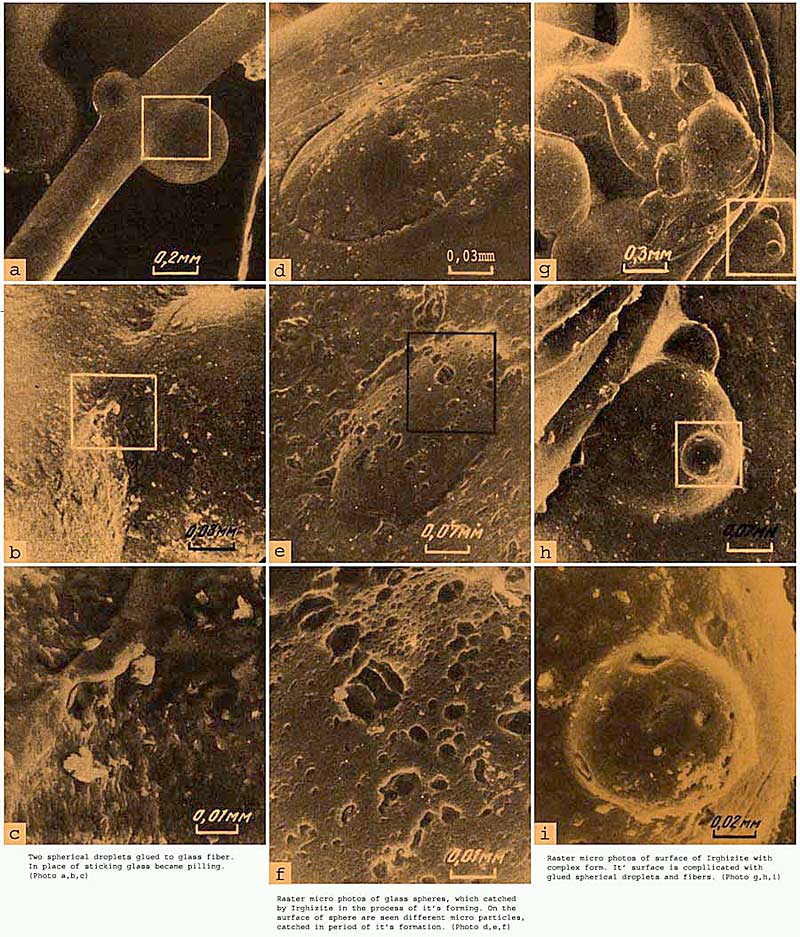 (Photo d, e, f) – Raster micro photos of glass spheres, which were caught by Irghizite in process of it’s forming. On the surface of sphere are seen different micro particles, caught in period of it’s formation.

a) Holes of crack at hardening quite common for the surface of Irghizites, having sizes from a micron to a few millimeters. Appeared as a result of the beginning of stresses in thin surface layer. Holes of crack sometimes similar to impact microcraters on a glass particles, taken from Moon regolith.

b) Holes small round or uneven pits with smooth outlines, having sizes from 1 to 20 micrometers. Sometimes they are ringing by low bank. Holes formed as a result of opening of a micro pores filled by gas, which was situated near the surface layer, when Irghizite was in a viscous condition yet.

c) Craters deep rounded hollows with steep sides; it’s depth more than the diameter. Craters appeared when bubbles were deep on the inside of Irghizite.

d) Transitional forms craters with smooth and, in some zones, peeling edges. They were formed in the period of partial hardening of surface layer. In zones, where glass was viscous – smooth, fibrous edge of bank was formed, in places, where glass was hard – rough edge was formed.

e) Caverns orifices with not smooth, notched edges, without any signs of fusion. They were formed as a result of opening blebs, on 100% hardening of Irghizite, or when a hard crust quite formed. Edges of caverns are rough, caverns filled by exfoliated scales inside. 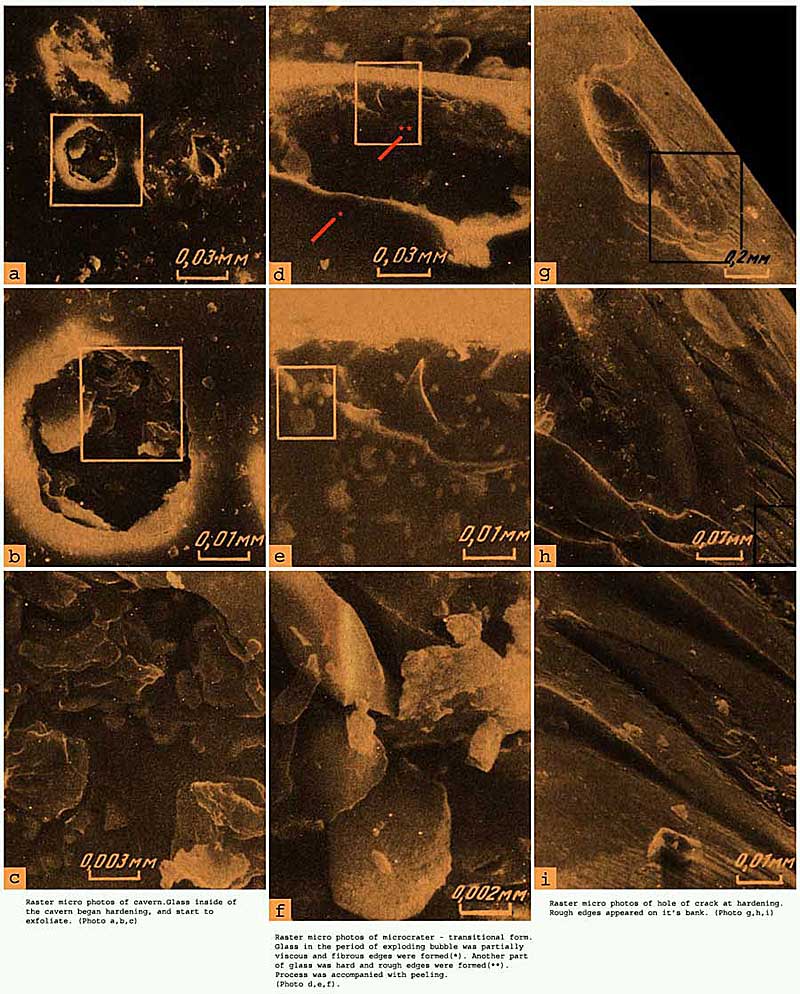 (Photo a, b, c) – Raster micro photos of cavern. Glass inside of the cavern began hardening, and start to exfoliate

(Photo d, e, f) – Raster micro photos of micro-crater – transitional form. Glass in the period of exploding bubble was partially viscous and fibrous edges were formed(*). Another part of glass was hard and rough edges were formed(**). Process was accompanied with peeling.

These negative forms of Irghizite surface are especially similar to structures, observable on glasses from Moon regolith.

As a result of weathering some structural formations prepared on Irghizite surface. All surface of weathered Irghizite consists of multiple fibers, holes of different size, balls and particles, caught by Irghizite during its forming. 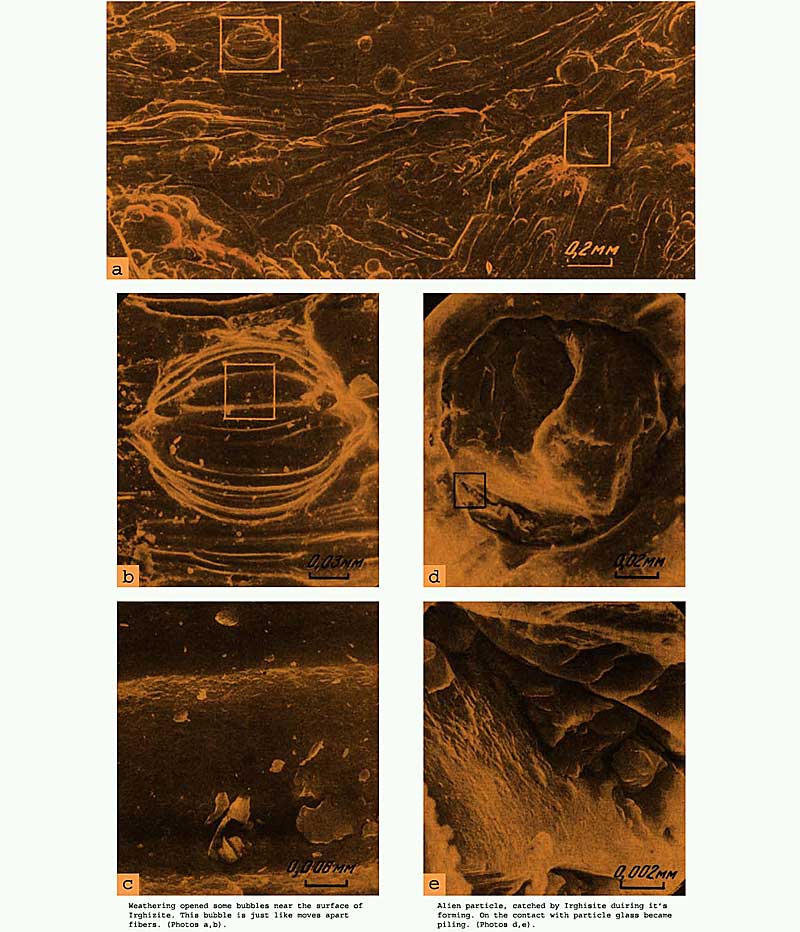 (Photos a, b) – Weathering opened some bubbles near the surface of Irghizite. This bubble is just like moves apart fibers.

Irghizites in thin sections – transparent and brown in passing light, refraction ratio – 1.509. Inner structure of Irghizites is irregular-fibrous, fluidal: brown fibers are alternate with colorless which consists of lechatellerite (refraction ratio – 1.460). Round transparent and opaque up to 0.01mm inclusions and blebs round or stretched parallel towards fibers, emphasizes fluidal structure are presents. Micro-granular structure of acid irghizites is well seen: they are formed from the smallest (less than micron) spherical particles, and a glass, cementing them. Micro balls sometimes fused and intermixed, but sometimes (near edges of Irghizite) with well kept form and borders. Irghizites are practically isotropic in crossed polarizers. Anisotrope inclusions extremely rare in them.

By chemical composition Irghizites are subdivided on tektites with acid structure. Formed as a result of condensation, silicate steams in the high-temperature cloud;

and tektites with the basic structure, being most likely the stiffened sparks of silicate fusion, thrown off from a crater.

Acid Irghizites have a microgranular structure they are formed from the smallest (less then a micron) spherical particles consisting sometimes on 80-90 % of silica and a glass cementing them, they are rich in aluminum and alkalis.

Chemical analyses reveals some differences and similarities between irghizites, impact melt rocks-zhamanshinites and other kinds of tektites. Vaporizative and chalc-filled elements (Cs,Tl,Pb,Sn,Mo,Bi,W,Cu) are containing in Irghizites in quantities which are very close to maintenance of them in the other kinds of tektites (tektites contains them 1.5, 2 times as much than in sedimentary rocks). The same situation is seen between irghizites and zhamanshinites. It binds with vaporization of more mobile elements in a high temperatures during tektites creation. Maintenance of lo elements, except chromium are also showing values similar to tektites of other groups. On the contrary, maintenance of water in Irghizites is unusually high for tektites – 0.051% (for ex. quantity of water in moldavite is 0.0092%).

Maintenance of lo and dissipative elements in five samples of Zhamanshinites and Irghizites.

Irghizites are different from magmatic rocks in principle, by low contents of alkalis and high contents of CaO and MgO, and also by presence only bivalent ferrum. Evaporation of mobile elements, among which alkalis are the most noticeable, is quite typical for high temperature fluids. This process due to radical changes of it’s composition. Apparently, Irghizites are the result of such evolution. Lower quantity of alkalis and higher ratio of K/Na witnesses about it’s deep high temperature metamorphisation. About high temperature metamorphiation also witnesses full absence of crystallization effects, but these properties of high temperature fluid can be saved only under very fast cooling and hardening. Meteoritical or terrestrial origin of Nickel in rock usually confirmed by its ratio with Cobalt: in terrestrial rocks these minerals contained in a close quantities Ratio of Ni/Co in basic Irghizites is similar to terrestrial: 1.5 – 2.5; but in acid Irghizites its extraordinary high and reaches values of 13 – 16. Judging by this fact we think that about 90% of Nickel, contained in acid Irghizites, has cosmic origin. It is decided that composition of gas in pores and bubbles in tektites is close to atmospheric, but on low pressure. Gas in blebs and pores of Irghizites consist of: CO2 , H2O , HF , H2S , H2 , HCl in basic Irghizites; and H2 , CO2 , H2O , HF , H2S in acid Irghizites. There are no N2 and O2 , which absolutely witness about atmospheric origin of gas in pores. By that fact gas in pores of Irghizites appears to be specific for these kind of tektites.

Paul is the webmaster for all of The Meteorite Exchange's websites including Meteorite Times Magazine. His fascination with all things space related began as a young boy during the Space Race. His free time is divided between meteorites, astrophotography, webmaster, and the daily operations of the ecommerce website www.meteorites-for-sale.com.
PrevMeteorites, Me, and the Newspaper
NWA 032 Lunar (basalt) MeteoriteNext