This was the fourth time we hosted an official IMCA dinner in Tucson during the show. Each year we have gotten a few more attendees than the year prior so I expected around 35 people. It is my pleasure to tell you we had 63 people at the dinner this year! 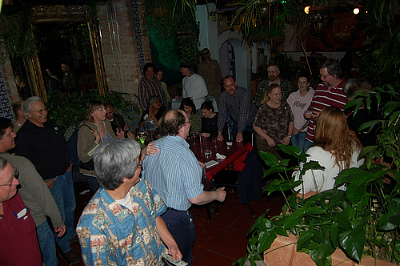 We had technical difficulties with some photos and several guests are not pictured but they aren’t forgotten. Thanks to everyone who attended and was shown in a photo plus Dorothy Norton, Dave Mouat, Mike Jensen, Bill Jensen, Russ Finney, and last but not least, Keith Vasquez, our photographer. A few people were not able to attend but they were missed: Jim Strope, Paul and Wendy Swartz, Karl Aston and his son, Bob Cucciara and Larry Sloan.

The next two pictures have nothing to do with the dinner but are provided for your pleasure. Who’d have thought we’d have two fine auctioneers at the Blood Auction!?!

Maria Haas
Treasurer to the Stars