I decided this year that I would not work right up to the day before we left for vacation. So Saturday was my last day of work and I got to do some resting up and leisurely packing before we headed to the desert on Wednesday morning. Paul arrived just about exactly when we had planned and we started toward Franconia. We have hunted the south side of the Franconia strewnfield several times and never found a stone. We have had much better luck on the North side of the strewnfield each finding several. But, as I indicated last month we were not going on vacation to really hunt hard. But to rest and recuperate from work , recline in lounge chairs and watch the planes fly over.

We got some gas in Barstow and had lunch at the same time. Then it was a routine drive across the Mohave Desert. We pulled off the interstate at the Franconia offramp and intended to head over to the middle of the south side of the strewnfield where we usually have camped in the past. We got a ways down the dirt road and it was clear that they had considerable water come through the washes. There was fairly deep sand across the bottoms of some of the washes and we decided that it was safer and smarter to just go back a little and camp on the west side of the strewnfield instead. So we headed south down the main dirt road to a spot where there was a large patch of desert pavement we could pull off on and get pretty far from the road. We wanted to avoid as much dust as we could since we were really focusing on astronomy this time out. Dirt and dust are bad on our equipment. We were able to get a couple hundred feet from the road and there is so little traffic that it was a fine spot to camp.

The weather the first night was great not a cloud in the sky. I had my camera adapter rig I had worked up all ready to try out. The Moon was not yet first quarter so it was going to be good for photograph all the nights we were there. Full Moon and near full are much less interesting to view and photograph since the light hit straight on and little detail is noticeable. But, I had a great crater rich edge to shoot each night. 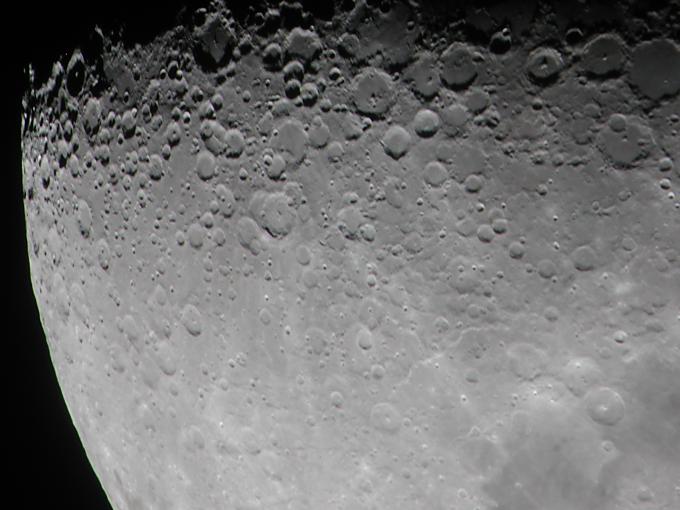 Thursday morning it was up early and go hunting before it got really hot. We had expected that the temperature would be in the 80’s as it usually is in mid October. But it was going to be 100 degrees and we decided to hunt just 3-4 hours. We knew our chances for Franconia meteorites was poor with all the work that has been done on the south side gridding every area. We were camping south of the real strewnfield so we were really doing new exploring. One piece of desert to cold hunt is as good as another when it is the desert pavement type detecting we were doing. We found our normal selection of bullets and wire and bits of lead and rusted manmade iron. No meteorites were discovered. But, fun was had and we were not in the office at work.

In the afternoon clouds started to roll up around us. It is interesting how the clouds form there in the Franconia area. We have seen it many times. The clouds will circle the area hugging the mountains all around and then as night comes they will move across over Franconia. We got to do no astronomy on Thursday night. We stayed inside watched a movie and had popcorn. We worked with the pictures taken the night before. I am using on the telescope my older Nikon with a fixed external lens. I have an afocal adapter that I made for connecting and keeping the eyepiece of the scope and the camera lens aligned and centered over each other. I can still use the telephoto range of the camera to remove the darkening that shows in the corners of the frame on wide angle settings. Neither Paul or I have equatorial mounts right now for our scopes so exposure times have to be short. And with this afocal arrangement the magnifications used are significant and movement of the image across the frame is very noticeable. Fortunately, the Moon shoots almost like a daylight object as far as aperture and shutter setting go. The sharpness is better at the fast shutter of 1/15th second but the saturation and overall color of the shot is better at 1/8th. It is sort of a balancing act. I actually went onto auto and used the program capacity of the camera to do most of the shots on Friday evening. But, I jump ahead a little. 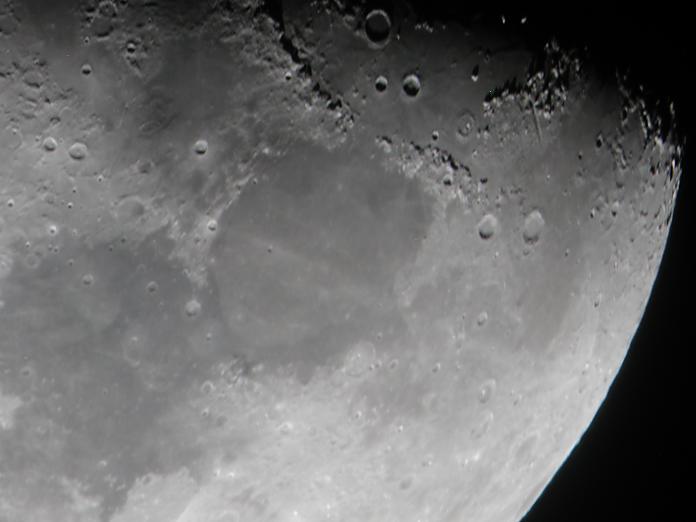 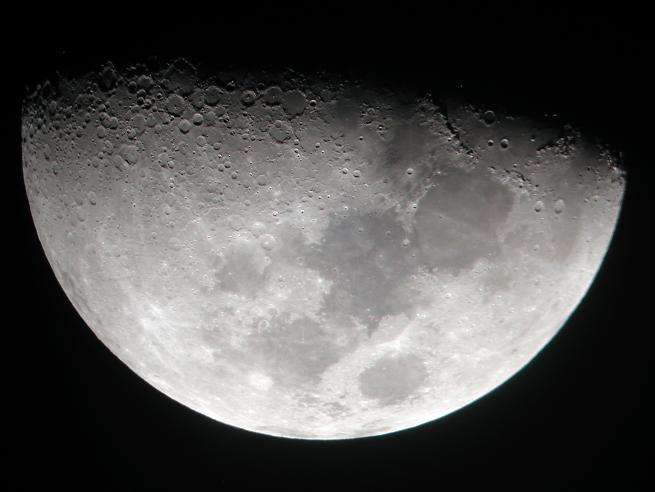 Friday morning, we had breakfast and sat outside in the shade and worked hard on doing nothing till mid-morning. We read books. Paul had some computer programming books and I brought an old book on stone rings of the British Isles. Paul got a lesson on plain and recumbent stone circles and barrow mounds and he could probably have lived all the rest of his life with out learning about them. But, they have been a fascination for me for years. We moved our lounge chairs like the shadow of a sundial. When there was nowhere to be in shade anymore we went inside until there was shade on the other side of the motor home. We had some work to do and brainstorming to do so we took care of that while there was no shade. Then it was more veg time till evening and we set up for sunset shots again. I set up the telescope once more for more Moon pictures. We had caught a few pictures of Jupiter on Wednesday night and looked at all our regular favorites. A nice selection of galaxies, nebulas, clusters, and a comet rounded out the first night we were there. But, the big surprise was while we were looking at one satellite go over we saw another on a near “collision” heading and that one flared very brightly for a couple seconds. I always forget to look up the iridium flare opportunities before going to the desert. We accidentally got to see a really nice one. 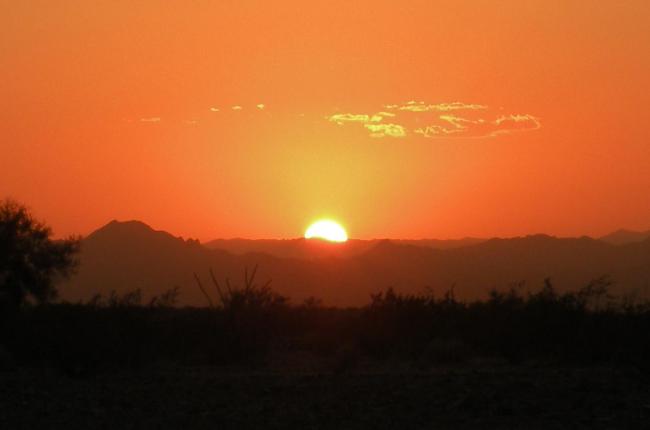 After getting more Moon pictures I put the scope next to the motorhome and we watched another movie, with plans to turn in rather early so we could get up and hunt meteorites for a few hours in the morning coolness. We decided pretty early in the trip that we would drive back to Bartow and stay at our favorite campground. It shortens the trip back on Sunday, lets us take a shower, get a hot meal and have wifi to catch up on email and the meteorite list. So we were going to hunt till around 12 noon and then go get lunch at the truck stop near Franconia. We drove part way down the road to as near as we could get to the west side of the strewnfield and planned to hike and hunt into the known meteorite yielding area. We actually had co-ordinates for the location of John Wolfe’s first find so I headed that way to stand on the very spot. I figured there would be a monument of some kind and there was. We have GPS tracks for everywhere we have hunted and a small area of the west side of the strewnfield was still unhunted by us so we hunted north of John’s first find and up toward the railroad tracks. We looped around and came back to the motor home. No meteorites were recovered again, but another area is off our list.

As I was heading for the location of John’s first fine I passed some letters made of rocks next to the road. RM, I wonder who made them was it one of our meteorite friends who has those initials. I don’t know I will ask him when I see him. 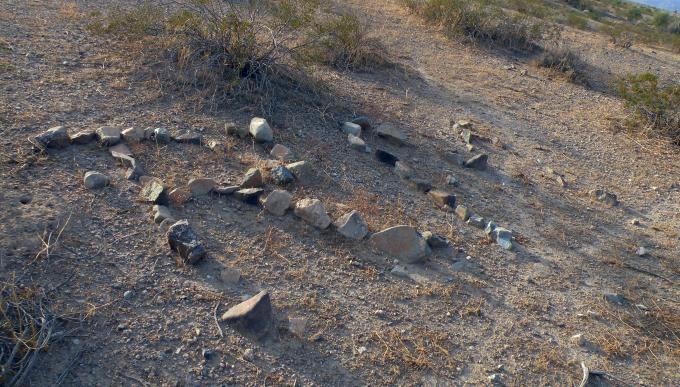 I picked up plenty of nice rocks for making jewelry. I have over the years been picking up the lime green rock that is scattered all over the south side. As I was walking back toward the motorhome I found one of the sources. There was a vein erupting to the surface of the green rock surrounded by a low mound of granite. I could not help myself and took a chunk of the rock. It should give me a supply of the pretty green stuff to last for a long time. Of course I also found a lot more 50 caliber bullets and other stuff, and one mystery signal that I could not separate out in the field. I spent about 10 minutes trying to find what was making the detector go off so strongly. I figured it was a piece of lead shot or casing brass. But I could not see it in the dirt. It was not magnetic, and having found a little gold in the past and knowing it is hard to recognize when covered in dirt I brought the whole sample in a baggy back home. I washed it out a few minutes ago and though I knew Franconia was not really a gold detecting area I had hoped it might be a small nugget. Well it was a piece of lead just like one would expect. So old that it was really incrusted in white lead oxide. It was not gray anymore at all.

As always we filled the week with lots of things to do and also had some great time out hunting for meteorites. Can hardly wait for the next time we can get away for vacation. I guess that will be Tucson in February, though that is a working trip it is always fun too. 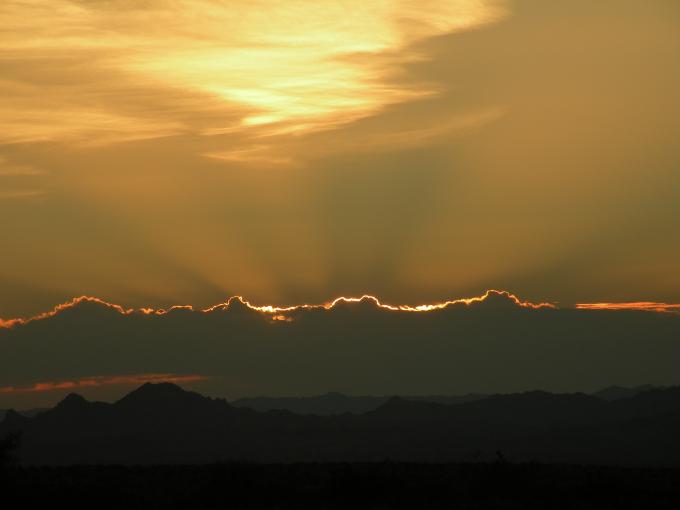 The Meteorite Exchange, Inc. was born in 1996 with meteorite.com and Meteorite Times Magazine in 2002. Still enthusiastic about meteorites and all things related to them, we hunt, collect, cut and prepare specimens. We travel to gem shows and enjoy meteorites as much now as in the beginning. Please feel free to share any comments you have on this or any of our other sites.
PrevIMCA Insights – November 2010
Ensisheim! The King of MeteoritesNext