In previous columns, we have been working through a review of the classic tektite morphologies. If the perfect minimalist tektite collection was limited to just three variations, I would choose a dumbbell, a teardrop, and a patty. In this edition, patties take the stage. 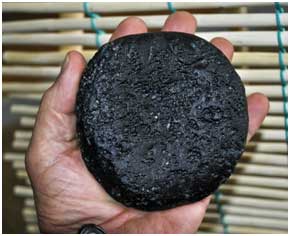 Patties are a proxy for a range of shapes that began life as oscillating spheroids of molten glass entrained in a fireball of billowing plasma. In the case of the c. 780,000 year Australasian tektite event, a majority of the primary spheroids near the apparent impact zone were secondarily distorted by atmospheric friction as they fell. They flattened into forms resembling hamburger patties. These range in size from poker chips to half-kilo monsters. The one pictured is 442 gms, but I have seen photos of one larger used as the socket for a door-post!.

For many years I supposed that the flattening deformation of patties was the result of impact on the surface of the ground while the glass was yet in a plastic state. I am now quite sure I was wrong.

I wish I knew how many tektites we have examined over the years, but it is well over a million pieces, and not a single one shows clear evidence of having draped over or welded onto anything on the ground beneath it. The evidence is that most, if not all, of the pieces that fell to the ground in what appears to be the proximal region assumed their final form in flight and were quite thoroughly solidified before impact. 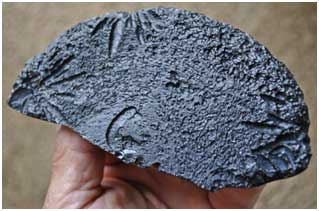 This specimen is particularly instructive. This is a fragment of the upper surface of an extremely splatted disk, mostly less than one cm thick. The ornamentation includes distentional concentric rows of thin brittle-skin icebergs in a frozen sea of younger glass which is, in turn, shattered by starburst skin splits from impacts internal to the mushroom cloud. I can imagine no way that such a thin plate would have an adequate heat budget for these features to be related to earth-impact (with retained internal plasticity). It is more likely that the brittle fragmentation breaks happened on impact. 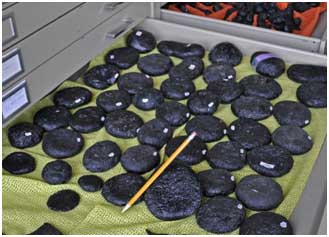 The biggest tektite patties on earth are mostly from Guangdong Province, China. I should say were from that area, as there are few being found anymore. The days of container-loads of tektites from China and Thailand are long over.

The selection of mostly over 200 gram world-class pieces in this image represents our crème de la crème after 20 years of highly selective acquisitions. The big one below the pencil, our pride and joy, is the 442 gm piece shown in the opening photograph.

The majority of tektite patties are near-circular in outline, giving evidence to their spheroidal primary form. However, do bear in mind that these are end-point examples. Less symmetrical blobs of glass wobbled into every intermediate form of biscuit and bar shape.

Most patties are concavo-convex in profile, but concavo-concavo forms occur, suggesting modification by Frisbee-like spinning. There are specimens that thinned and ballooned in the center like parachutes capturing the wind. We have one that looks like it popped in this fashion. 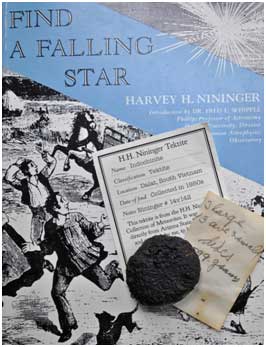 Oddly though, this story is mostly about Indochinites in a very restrictive sense. The monster patties were from China. Smaller examples are abundant in Vietnam, Thailand, Laos, and adjacent regions. The Rizalites of the Philippines are characteristically ovoid-profiled biscuit shapes. The primary forms of the Australites were mostly spheroidal. Some moldavites formed patties, but most other tektites were dominantly spheroidal. Most big patties, and all the monsters, are from Guangdong , China.

One of our personal favorite patties was collected by Harvey Nininger in 1958 in Dalat, Viet Nam. Nininger is something of an unsung hero to all of us who know of him. His words:

“Apply your mind to at least one problem which has never been solved, which in general is considered impossible of solution, but which, being solved, would help humanity. Do with your life something that has never been done, but which you feel needs doing.”

Harvey, you inspired more than you could ever know! Thank you.

Norm Lehrman is a recently retired exploration geologist with over 45 years experience. His career involved fieldwork in over 35 countries on every continent except Antarctica. While stationed in Australia, Norm and his wife, Cookie, became interested in collecting Australites, which ultimately led to a generalized passion for tektites, impactites, meteorites and related materials. In 1999 they founded the Tektite Source business (www.TektiteSource.com) which has evolved into one of the world's premier providers of tektite and impactite specimens. Norm has retired to a ranch near Spokane, Washington, where they continue to serve tektite aficionados worldwide.
PrevInvestigating planetary interiors with meteorites: the case of Mars
NWA 487 L/LL3.4Next