Wild Geese and a Buzzard

Over the years my wild goose chases for meteorites can be counted on one hand. I just don’t seem to get a lot of the calls about grandpa’s meteorite that fell on the hill just over there. But, I got home from an early morning meeting one Saturday recently as the phone rang. It was a professor in the Physics and Astronomy department at the university who my wife worked with. Over the years we have been to dinners and retirement parties and often talked of meteorites. He and his wife have a wonderful antique store in the quaint old town area of Monrovia in Southern California. A man had come into their store with “meteorites” he wanted to sell.

My wife took the call and was surprised to hear Dr. Taylor’s voice. And even more surprised when he asked if I would be interested in buying meteorites from a man who was in the store. She gave the phone to me and I asked for a description of the rocks. And they did not sound like meteorites. They were black but not attracted to a magnet at all. My mind jumped to the ferro-manganese stuff that our desert is full of now. We talked a minute and I gave the basic simple tests for him to try and he said “I don’t think they could be meteorites.” Dr. Taylor said the man had some bigger ones in the car and went to look at those also. He returned to the phone and said that the magnet struck to those and they looked different from the others. I asked if the man would wait because it would take us a while to get there. The man said he would wait.

In a few minutes Sara and I were off on our meteorite adventure. It was about 40 miles to the antique store from our home. We had been there before to shop and I knew the way well. Actually, Sara loves the store very much and enjoys going when ever we can.

I had gabbed my diamond file, magnet, loupe and 500 gram electronic scale and put them into a plastic bag. I was ready to make my on the spot analysis. We arrived and after a short introductory moment headed to a table in the back of the store to examine the “meteorites”. There were three large rocks on the table and a cardboard box lid covered with smaller different stones. Well, the three rocks on the table were each a different type of meteor-wrong. One was a big piece of furnace slag that was rusted brown and the magnet slammed on to it strongly. One of the other two was also slag but black and was bubbly on the one broken surface. The outside of it was actually quite reminiscent of a meteorite. Unfortunately, it was also furnace slag and not very magnetically active. The last of the three large stones was a basalt cobble of considerable size. My rare earth magnet barely pulled to it. I have dug up plenty as hot rocks at strewn fields whose names are know by most of the reader of this article.

I told the man what they were and that none of the three large ones were meteorites. I moved my attention to the rocks in the box lid. These were all small. They were a dense black the perfect color of fresh fusion crust from a fall that happened yesterday. They were the correct size and shaped similar to many meteorites in my collection. But, there is no Eureka moment in this story. They were pieces of the ferro-manganese slag that has been scattered over our desert. Exactly how it has gotten to all the places it is found is kind of a mystery. It seems likely that it is material produced in vast amounts during the time the iron works of Kaiser Steel were in operation at Fontana, California. I remember as a kid seeing those enormous slag heaps. But, this stuff is found spread widely across the Southern California area. I told him once again that he had no meteorites and he took it pretty well. Since we were there we looked around the store and of course found a couple things we could not live without.

I have been presented with a piece of that slag every time I have spoken to a group on meteorites for the last ten years. Everyone has one and believes its a meteorite. But, if you remove the surface black you will see a shiny metallic material that is just a little too silvery looking to be iron. But, it is not effected by a magnet very much. It’s tricky stuff. It also seems to tarnish back to black over time.

Well, I guess the real news this month has been the spectacular fireball and meteorite fall in Wisconsin. The pieces are being found but it seems that they are being recovered at a slower rate then some other recent falls. I expect that meteorites will be found in the area for a long time. I looked at the various videos and I think there are some big pieces out there waiting to be recovered. But, it is a vast strewn field. It would take a diligent hunter a lifetime by himself to hunt it all. Guess it is good that there’s a small army of eager meteorite hunters. Just a few more years will find me retired and maybe I will join them at future falls.

I have had a box of nice chunks of Alamo Breccia sitting around for several years. I started cutting more of it up this month. I love the stuff. Was inspired to work with it again since seeing Geoff and Steve back at the location on Meteorite Men. It was Geoff’s enthusiasm for the impact site that led Paul and I to take vacation there years ago. The material cuts easy and polishes up beautiful. Makes me wish my saws and laps were a lot bigger. I have some big pieces and have never figured out how to make use of them whole. 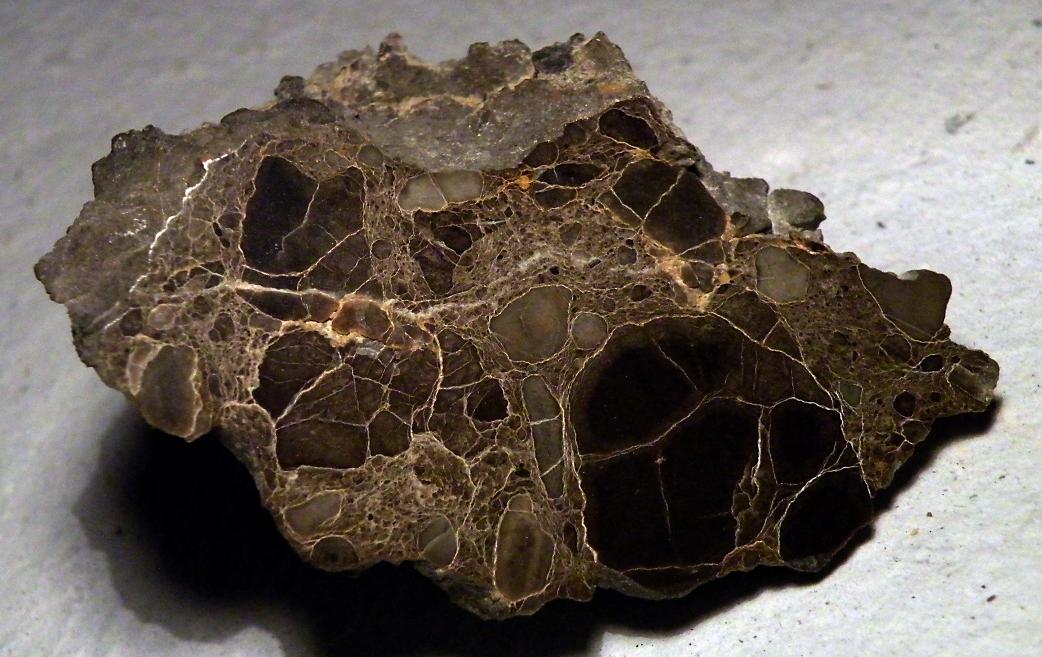 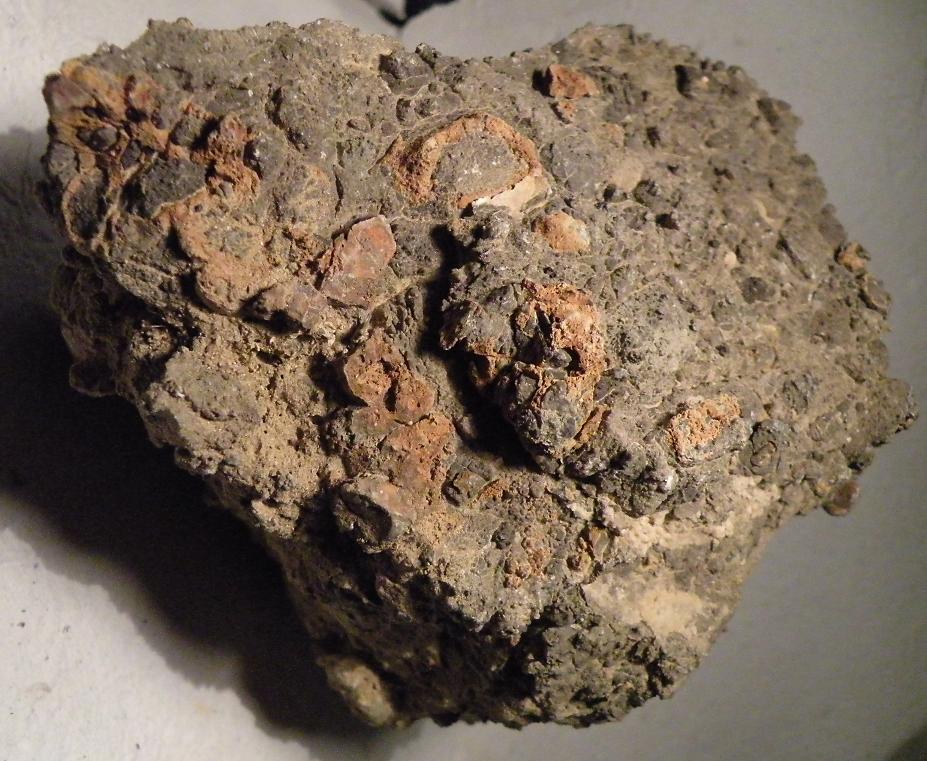 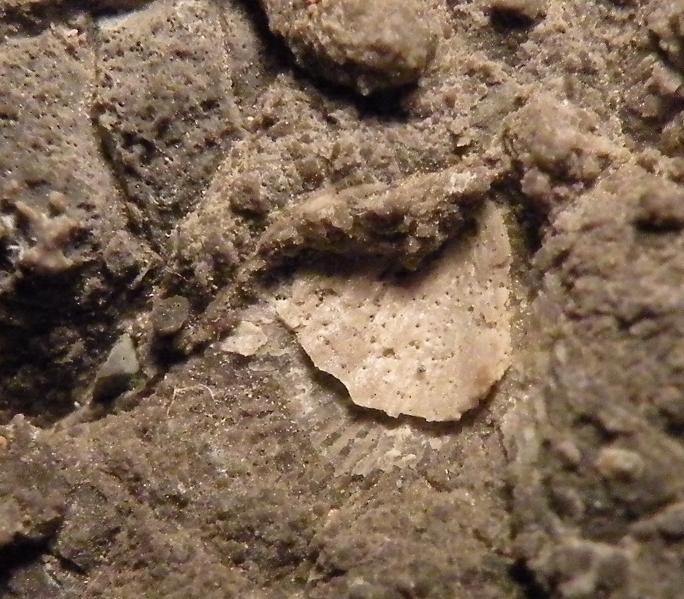 They would fit in the big vibrating lap but I would need to make a cut through the middle of them. I will give it more time and thought, but soon I think I will make some really striking display pieces of Alamo Breccia. Might just have to get a bigger saw.

Like so many other collectors my collection now has a Buzzard Coulee individual. I received it today, but I picked it out in Tucson. It came with its export permit and I am just as happy as can be.

I selected a small completely crusted stone that was oriented. It has one side that is shield shaped, there is a little build up with flow lines around the circumference. It is quite a cute little stone well worth the wait. 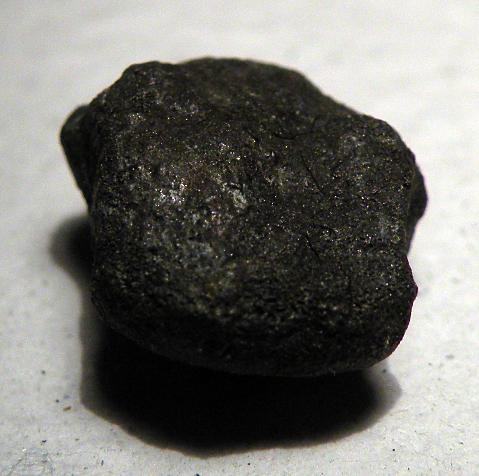 I suppose at some point I will get one of the stones from the Wisconsin fall. But, I think I will let it all settle out a bit before I buy. It does look to be an interesting meteorite. I am enjoying reading all the stories coming out of the strewn field. Well, its time to sign off and get the Buzzard Coulee under the microscope for more examination. Have a great month.

The Meteorite Exchange, Inc. was born in 1996 with meteorite.com and Meteorite Times Magazine in 2002. Still enthusiastic about meteorites and all things related to them, we hunt, collect, cut and prepare specimens. We travel to gem shows and enjoy meteorites as much now as in the beginning. Please feel free to share any comments you have on this or any of our other sites.
PrevRecovery of Meteorites from the 4/14/2010 Fall in Wisconsin
Witnessed Fall: Castalia, North Carolina, USANext