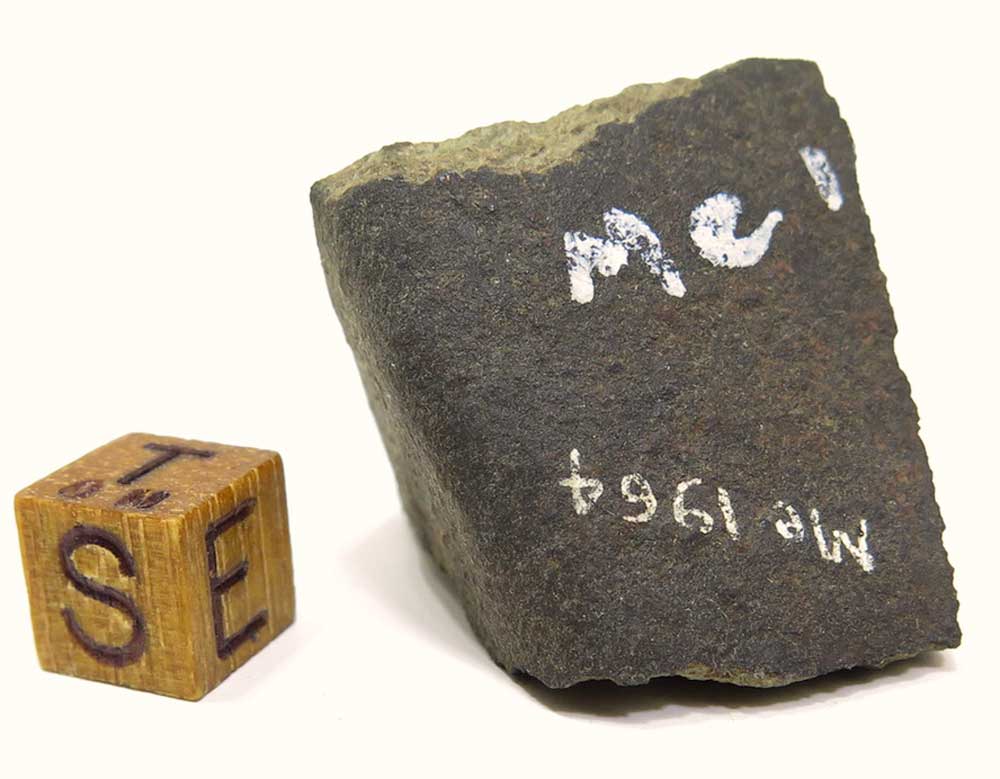 A lone shooting star graced the evening sky of the Lone Star state back in 1909, one of only two witnessed meteorite falls that year. Normally the excitement of a fireball would make the news and keep the conversations animated at the local diner, but not this time. The simple reason for barely a mention in the local press was because the meteorite fall was preceded earlier that day by a nearby F4 tornado that pretty much destroyed another equally small town 12 miles away.

While the loss of life and property in the nearby hamlet of Zephyr, Texas was severe, a few folks in Blanket, Texas had the presence of mind to look for, collect, and share several stone meteorites, the largest of which made their way to the Field Museum in Chicago. 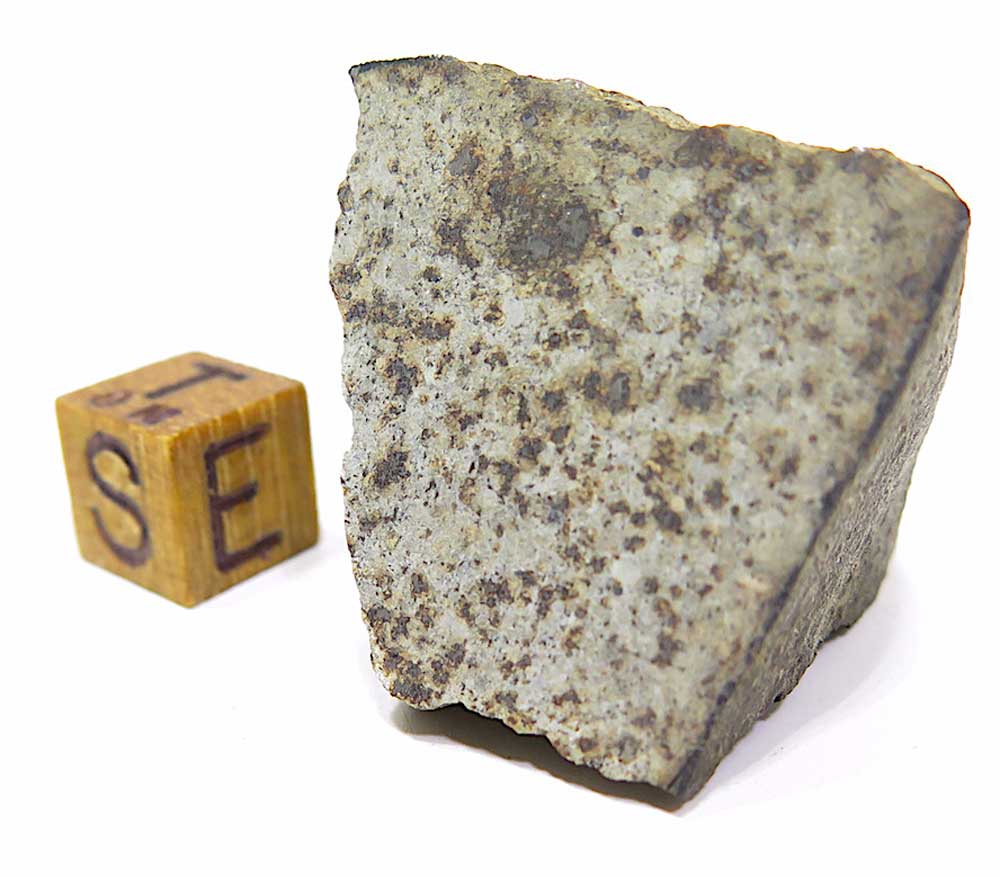 Some 20 years later, H. H. Nininger continued the search for stones around Blanket and discovered a 2kg stone recovered at the time of the fall by a child named W. W. Dossey who grew into Professor Dossey by the time Nininger met him. Professor Dossey’s stone, like many meteorites including Blackwell, Oklahoma (written about in the previous edition of the Accretion Desk) spent its childhood on earth working as a doorman. 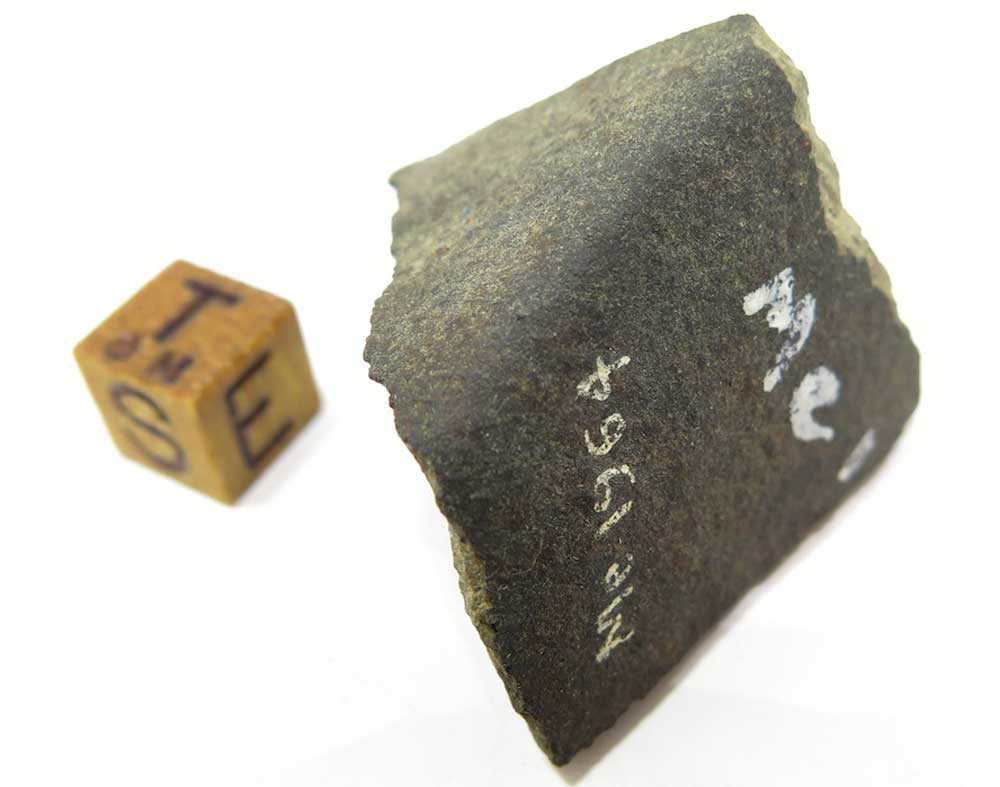 The Dossey stone ended up in the Smithsonian Collection minus a 180g section Nininger kept for his personal enjoyment. The two original stones that the Field Museum acquired weighed 1.5kg and 1.6kg. And the total known weight of the L6 chondrite named Blanket totals around 5kg.

And a thanks again to Frank Cressy and his landmark book From Weston to Creston for providing background on Blanket. 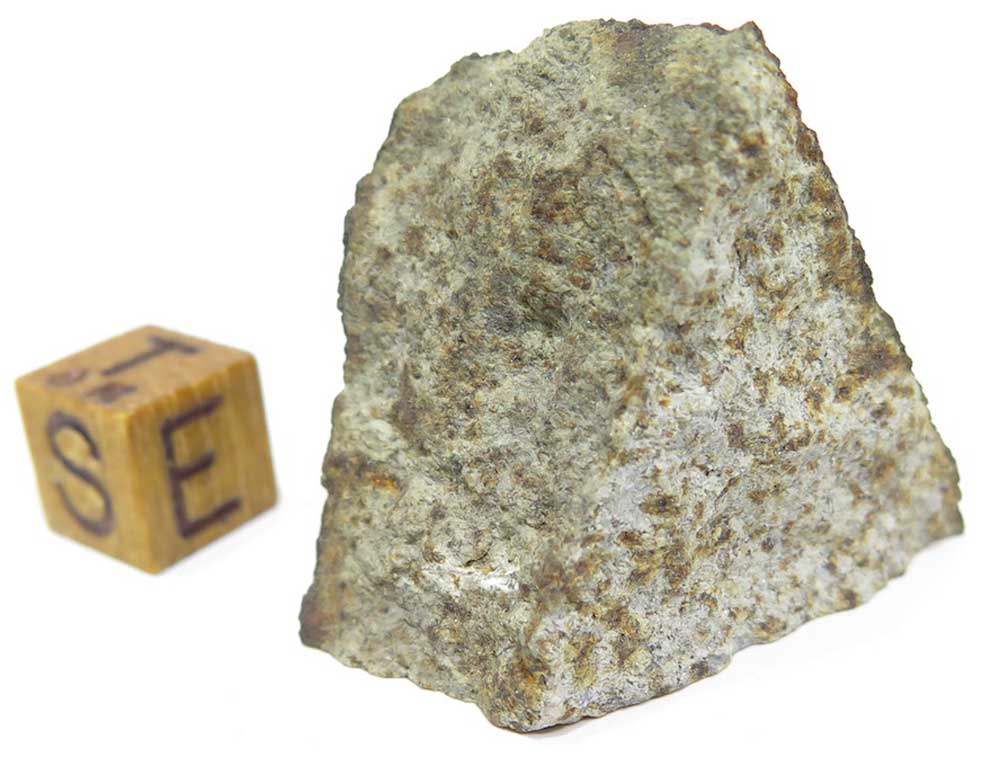 I’ve always liked towns that have common nouns as their name. Some of my favorite are in Colorado including Boulder, Dinosaur, Eagle, Marble, Parachute, and of course Rifle. With each name comes a story. And the story of Blanket, as much as one can trust the history of such things, has its origins from a local landmark, in this case, Blanket Creek. And Blanket Creek got it’s name, so says Wikipedia, “According to tradition, Blanket Creek was named from an incident when a group of Tonkawa Indians sat under blankets to stay dry during a rainstorm.” 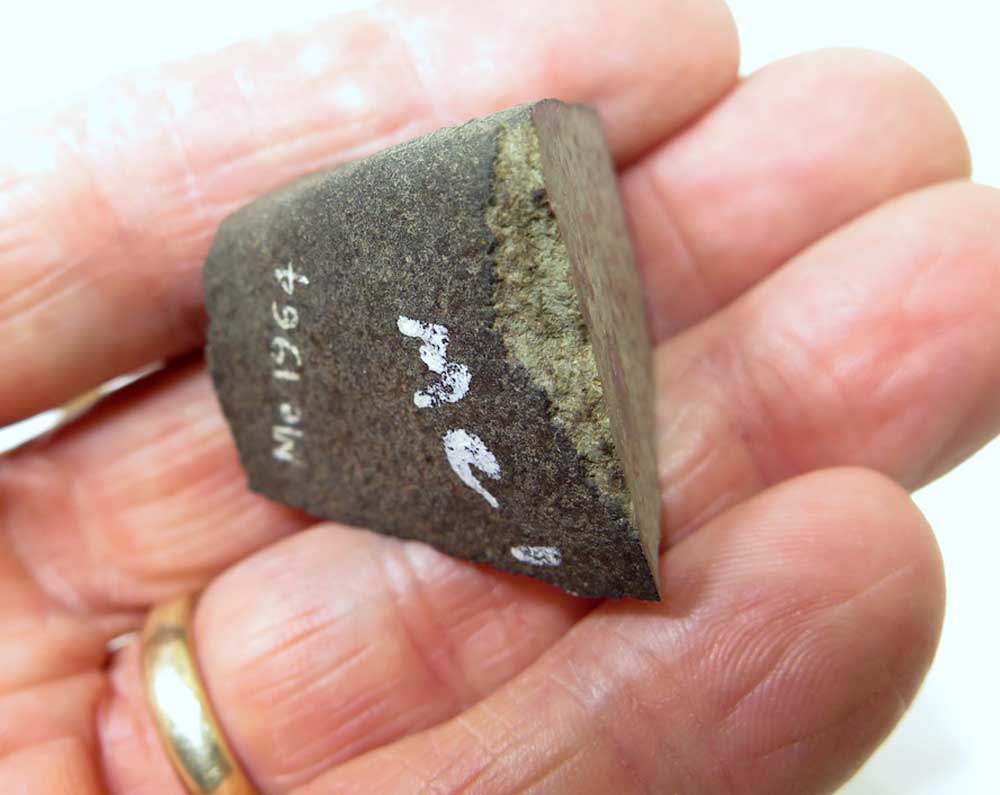 So the Blanket meteorite was named after the town of Blanket that was named after Blanket Creek that got its name from a blanket used as an umbrella. Umbrella? Now that would be a good name for a city. And it’s not taken. According to geotargit.com, there are zero places in the world named Umbrella.

And while playing around with place names, I noticed there was nowhere on earth named meteorite, chondrite, or asteroid. But there are 11 places named Comet including one in my backyard that I never knew about. Comet, Montana. 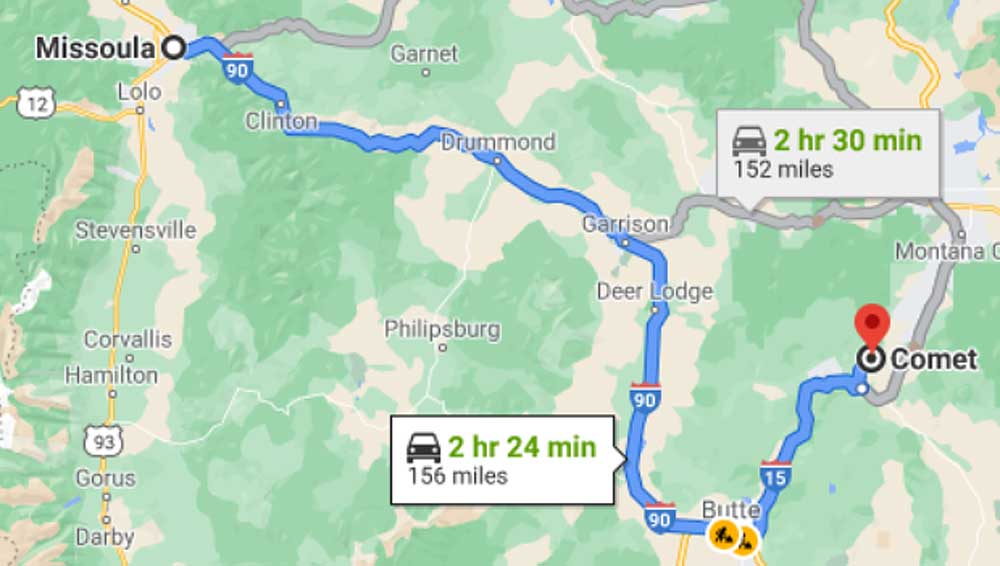 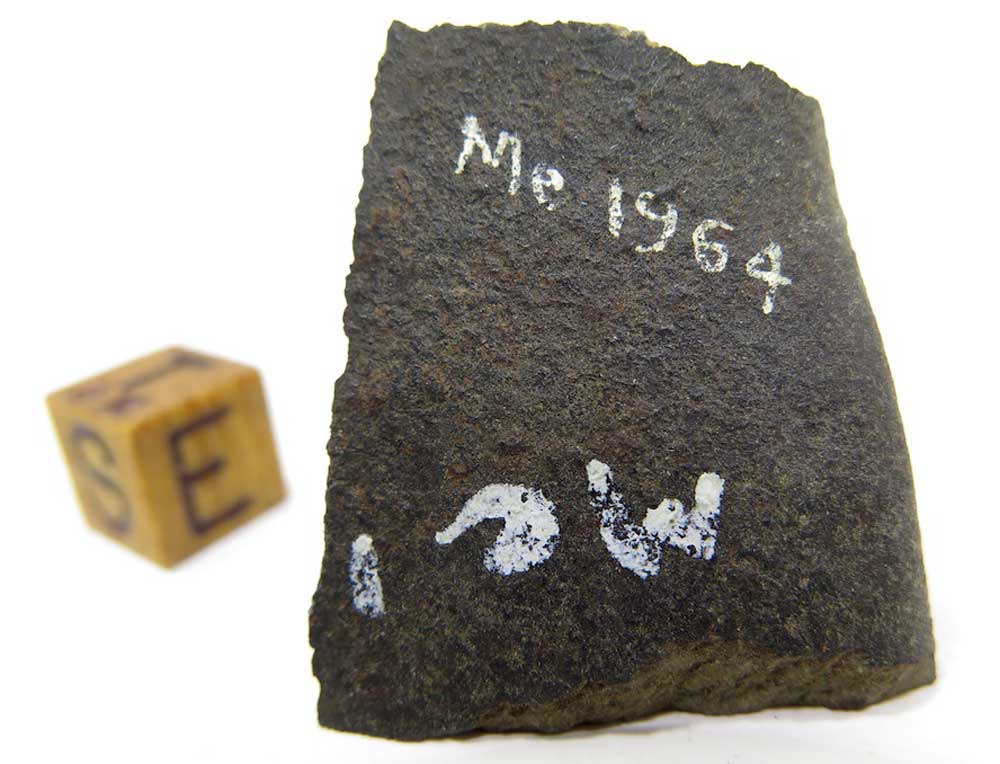 At 111 years old, Blanket looks great for its age. The rich black crust is still rich and black. The metal flake visible on the cut faces is shiny and mostly free of rust but with mild staining. And the specimen numbers are holding up well since first touched by the paint brush many years ago. Its just too bad that meteorites are frosty cold when they fall because if any meteorite deserved to be warm when it fell, it would be Blanket.

Like many of you, I heard the sad news of Dave Gheesling’s passing through our usual meteorite channels. And without a doubt, the global meteorite community has lost one of its finest. Dave was as interested in collecting rocks from space as he was in collecting time with the personalities in meteoritics. His website fallingrocks.com is filled with photos of people as well as stones and irons.

Dave first emailed me out of the blue in 2007. We talked meteorites and the existential implications our collecting rocks from space on the future generations. As you all know, both Dave and I held a particular affinity for historic witnessed falls. And with a great fall comes great responsibility. So forever after, Dave and I would discuss the future impact of our meteorite collecting passion with an eye towards our kids who will somehow someday pickup where and when we leave. And now Dave has left us.

In 2011, I met Dave for the first time in person at the Ensisheim Show. But what truly made the meeting special  was that we both brought our young children. My son Lukas was nine years old at the time. Dave’s daughter Maddie was of similar age. It was wonderful that our kids could play games while the grownups played meteorite.

One of Dave’s many contributions to our collecting was to always step back from the rocks and consider the people who held the rocks in the past, and those who will hold them in the future. So as our global community of meteorite collectors morns the loss of one of our own, we should also find comfort knowing that the story continues and a new chapter in meteorite collecting will now be written. Take care Dave. Ad astra!

“Oh, I have slipped the surly bonds of earth,

And danced the skies on laughter-silvered wings;

and done a hundred things You have not dreamed of –

wheeled and soared and swung high in the sunlit silence.

Hovering there I’ve chased the shouting wind along

and flung my eager craft through footless halls of air.

“Up, up the long delirious burning blue

where never lark, or even eagle, flew;

and, while with silent, lifting mind I’ve trod

the high untrespassed sanctity of space,

put out my hand and touched the face of God.”

Dr. Martin Horejsi is a Professor of Instructional Technology and Science Education at The University of Montana, Missoula. A long-time meteorite collector and writer, before publishing his column "The Accretion Desk" in The Meteorite Times, he contributed often and wrote the column "From The Strewnfields" in Meteorite Magazine. Horejsi is also the Lead Technology Reviewer for The National Science Teaching Association, and just celebrated his 22th year working with NASA and the JPL in education and public outreach (EPO), and is a NASA Solar System Ambassador. Horejsi specializes in the collection and study of historic witnessed fall meteorites with the older, smaller, and rarer the better. Although his meteorite collection once numbered over a thousand pieces with near that many different locations, several large trades and sales and trades have streamlined the collection to about 250 important locations with all but 10 being witnessed falls. Many of the significant specimens in Horejsi's collection are historic witnessed falls that once occupied prominence in the meteorite collections of Robert A. Haag, James Schwade, and Michael Farmer. Other important specimens were acquired through institutional trades including those from The Smithsonian Institution, Arizona State University, and other universities. Horejsi was awarded the Harvey (Nininger) Award in Tucson in 2006, The Brotherhood of Guardians of the Ensisheim Meteorite in 2011, a JPL Inspiration Person, on the JPL STARDUST Team that was awarded the Smithsonian Air and Space Museum Annual Trophy in 2008, and former board member of the International Meteorite Collectors Association, and the Northwest Council for Computers in Education.
PrevMore Than Dust in a Bottle
Dr. Carleton MooreNext