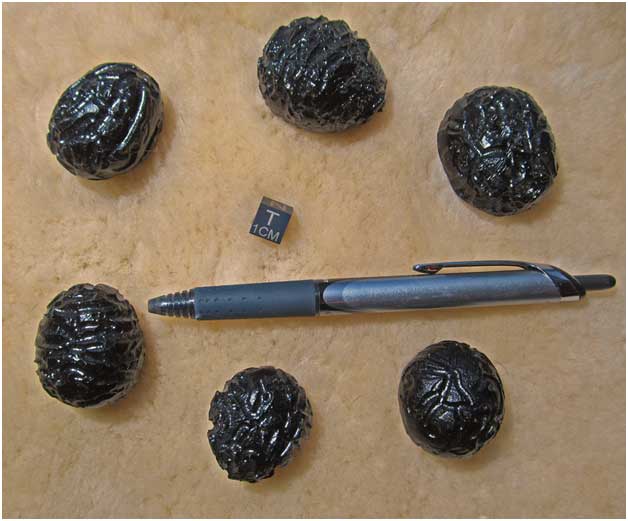 Streets radiate from a focal roundabout at the city center of Belitung Island’s largest metropolis, Tanjung Pandan. Within this roundabout is a formal garden in the shape of a flower, and at its center is a pool ringed with jetting fountains. Rising from the pool are six massive tiled columns supporting a hexagonal platform slab some 40 or 50 feet above the ground surface. Strings of lights drape in radiating garlands from the platform to the ground.

Upon the platform sits a black egg-shaped sculpture covered in pits and deep latitudinal u-shaped grooves. It is the size of a small truck, like a thirty-foot long blimp.

I am quite confident that it is the biggest tektite monument on earth!

The monument glorifies one of the most curious natural wonders of Belitung Island, the “batu satam”, which loosely translates as “bile of the sand”. I suppose that the dark, glistening lumps of glass reminded them of gall-bladders. 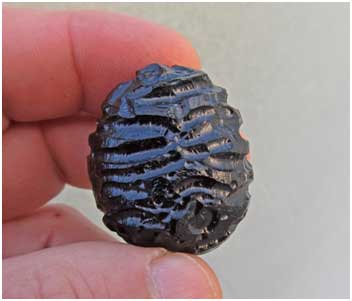 These strange (and revered!) stones were found by tin miners exploiting alluvial cassiterite ores to a depth of 30 feet or more below the present ground surface. Jet black and as glossy as wet enamel paint, these stones are commonly encircled by deep U-shaped grooves and pits. The grooves sometimes duplicate flowing Arabic script, and when such scripts match those of cultural significance, the stones are deemed particularly magical.

We know the batu satam as “Billitonites”. They share their characteristic bright gloss and deep ornamentation with Malaysianites, Javanites, and Borneo tektites. Philippine bikolites come close, but are not quite so bright. They are held to be part of the approximately 800,000 year Australasian impact event that seems to spray from a point in the area of the Bay of Tonkin. It is believed by most researchers (and they are few), that the deep etching and gloss is due to highly acidic soils that prevail in this region, some 1500 to 1700 miles down splash from the suspected area of ground zero. (The gloss reminds me of acid-polished Mexican Onyx). 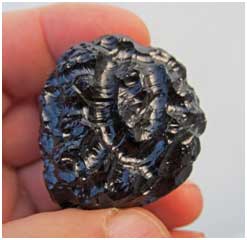 Billitonites rarely reach the collector’s market. At best, they were always quite rare and there has long been a good demand for the chance finds amongst Belitung’s jewelers, who faceted, cabbed, or simply set the rough stones in gold, mostly for the tourist market. It is probable that this was the fate of the majority of all Billitonites ever recovered. Now, due to the serious environmental degradation brought about by the tin mines (a great many of which were illegal and completely unregulated), the mining which yielded the occasional Billitonite is grinding to a forced halt.

We have been attending the big Tucson rock & gem show for some 17 years, and in that time we have found one (1) Billitonite for sale. It was from an old European collection. We bought it, and it remains one of the significant rarities of our collection.

BUT—- (and here we finally arrive at the focus of this Tektite Teaser), this year our friend Jiri Simek, arrived at Tucson having just recently returned from a several week visit to Belitung, and he had Billitonites! And monsters, walnut to golf-ball sized! They are brilliantly glossy, deeply ornamented, and absolutely free of recent damage. He got them from retired miners. These were their private “keepers”—the really, really special ones they intended to keep forever. But with the mines closed and their jobs finished, their precious batu satam stones were a way to find food for their families.

We bought all we dared when we found them early in the show, then returned on our last day and spent most of our remaining money buying more.

The pictures scattered through this article are representatives of this amazing lot. Enjoy!

(This article desperately needs a photo of the tektite monument, but, alas! I can’t infringe on copyright protection. Just do a google images search on “ Batu Satam monument”. This place is now officially on our bucket list—). 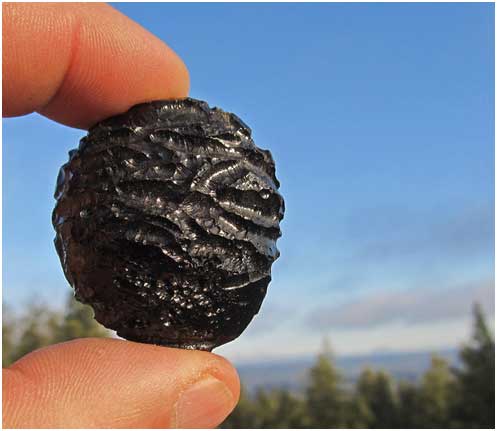 Norm Lehrman is a recently retired exploration geologist with over 45 years experience. His career involved fieldwork in over 35 countries on every continent except Antarctica. While stationed in Australia, Norm and his wife, Cookie, became interested in collecting Australites, which ultimately led to a generalized passion for tektites, impactites, meteorites and related materials. In 1999 they founded the Tektite Source business (www.TektiteSource.com) which has evolved into one of the world's premier providers of tektite and impactite specimens. Norm has retired to a ranch near Spokane, Washington, where they continue to serve tektite aficionados worldwide.
PrevMore Than Meteorites In Meteorite Collections
Metal in DaG 1040 CV3Next