This has been a summer of 40th anniversaries. It was my fortieth high school reunion, there are specials about Woodstock on TV. But, the Moon Landing was by far the most important for me. I actually met my wife the day of the Moon Landing. As Neil and Buzz walked on the Moon she and I with other friends gathered around a TV to watch.

This last month there was a book signing in town. Paul and I along with my wife of course, met early on a Saturday morning to buy Buzz Aldrin’s new book and get wrist bands to gain us entrance to the signing in the afternoon. Meeting Buzz was one of my wife’s dreams and it was fulfilled this month as she had the chance to tell him about how we met as he walked on the Moon. I have to admit that I was somewhat star struck as well. I have met several astronauts and among them now 25% of those who walked on the Moon. But, meeting Buzz was special.

I expected as we arrived very early before the bookstore opened to already find a line of eager people waiting. But, there was none, just one of my daughters holding our spot at the front of the line. This was so important we were taking no chances. Even when the store did finally open there were only about a dozen of us there to buy his book. To met and get an autograph you had to buy a book. They were only issuing 300 wrist bands. The lack of a line was discouraging to me. It spoke to the declining interest that I perceive the public has in things of space. When the actual discussion and signing took place there was a good crowd including a good number of young persons. So perhaps it is not as bad a situation as I think. 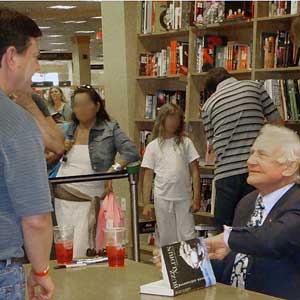 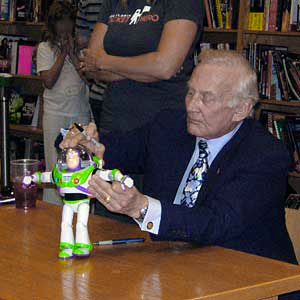 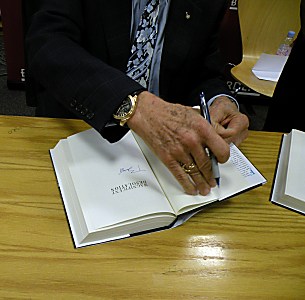 One of our goals with this magazine and the other things Paul and I do is an attempt to draw new persons into the hobby and study of meteorites. We have lost our dark skies in many areas and Astronomy has changed and adapted as best it can, but it does not have the numbers of avid observers it did forty years ago it seems. Again that may just be the perceptions of an old person. But, I remember bigger crowds at events and more attendees at star parties. Meteorites, seem to be doing well and a lot of credit can be given to the fine programs presented on television. I am encouraged that our niche in Astronomy will thrive.

Forty years ago I already had a handful of meteorites and almost ten years of lapidary experience. I had built a couple telescopes and had been to Meteor Crater. Now in the present I am only more obsessed. The telescopes are bigger, the meteorite collection is bigger and after three versions of a Meteor Crater book, meteorites are taking only more of my time then ever. But, I would not change it. A part of me is still huddled around that TV with Sara watching Neil and Buzz step off the ladder and onto the Moon. I thought that I would see men walk on Mars. I do not think I will now. Yes, there is still quite a thrill to seeing Mars through the eyes of robotic probes, but it is not the same as having people land there. And mankind may return to the Moon again soon. My wife and I will be glued to the television that day I am sure. Meeting Buzz was something we thought unlikely and is now checked off of our list of unobtainable dreams. I think we as a race need to have unobtainable dreams that get fulfilled. Maybe we need to go to Mars and back to the Moon if only because nothing else brings us all together as one people in quite the same way.

Vacation time is coming and as yet I have not made a plan. Paul and I discussed a little about just going to the desert and setting up scopes and relaxing. No hard meteorite hunting for eight or ten hours a day. Maybe do some astrophotography if I can find some fast film. It has been more than a decade since I even loaded a roll of actual film. I would guess that if we do go out to the desert that somehow we would find some time to look for meteorites. It is sort of in our blood now.

Maybe it’s the 8.8 kilo stone and the several 1-2 kilo stones that are staring at me all the time saying “Cut me, Cut me” that make me think about taking a little break for one year’s vacation. I have worn out a few blades this year and have more cutting to still do then when the year began. But, I can not help but telling myself that it will continue getting harder to find meteorites to keep in inventory. I think we can all see that the supply of NWAs has slacked off a lot. 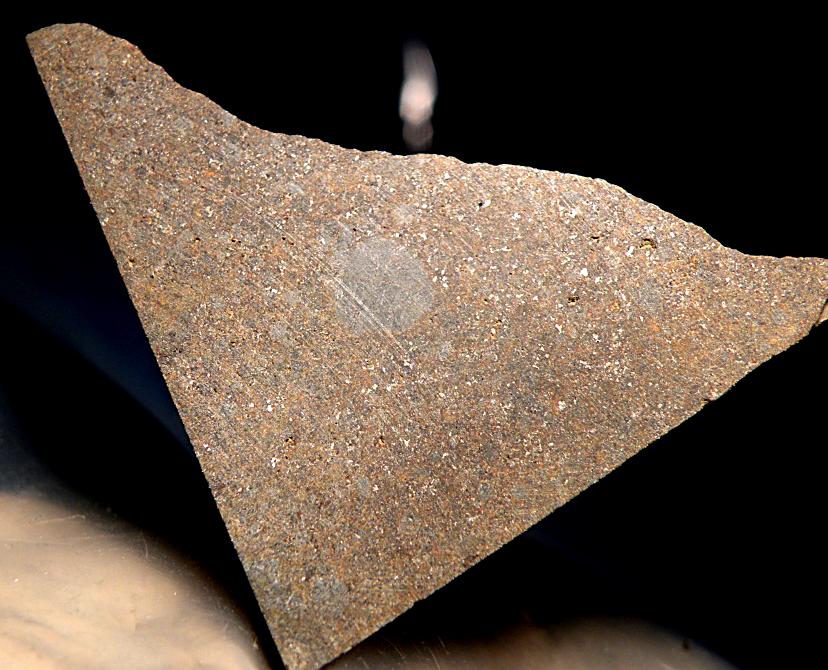 Part slice off of 8.8 kilo NWA we recently got.

I have got prepared chunks to send off for thin sectioning on a big stone. And once again it is a search for a lab to do some classification work. I may even send off a couple personal desert finds that I have held back way too long. Just seems like maybe now is a good time to wrap up some loose ends.

It was just about ten years ago that we were at the beginning of the meteorite rush. I remember some feelings I had then concerning the lack of information about find locations and wondering how I would play by the current rules in getting official status for the stones. Who would have guessed that the rules would so completely change. That there would be thousands of regional numbers issued for stones. Or that pairings would be sorted out, if ever in the very distant future.

I know that ten years ago I had one diogenite in my collection. I had no brachinites, one or two aubrites, and maybe one urelite or two. Wow, now it is hard sometimes to tell myself that I need to get another diogenite. It has to be super great priced and be unique. How odd that such rare classes of meteorites must now have some especially peculiar characteristic to sell. Are we at a point of saying things like “its just another brachinite”? I hope not. Some of us who have been around meteorites for decades remember waiting years for a meteorite we desired to become available. We had personal relationships with dealers. And there were only a few dealers. They often knew we were looking and would call if something became available. I know that still occurs, but there is a feeling now that if I want it I had better search the websites constantly and hope I am first to strike. I have missed a couple lately by an hour or two. Darn work that keeps me away from my computer. When are those cybernetic implants coming so I am online all the time?

If the next twenty years are anything like the past ten for meteorites, it is going to be fun. I am glad that there are databases and spreadsheets. Otherwise I would have to depend on my memory for what I have. And that would create an ugly situation of redundancy.

Last thought for the brave

I have written a monologue about intelligence and faith that is available to read by following the link coming up. There is serious religious content so be forewarned if that’s not your thing. Jim’s Monologue on Faith

Till next month, Jim

As always if you  have something to tell me you can reach me here jim@meteorite.com

The Meteorite Exchange, Inc. was born in 1996 with meteorite.com and Meteorite Times Magazine in 2002. Still enthusiastic about meteorites and all things related to them, we hunt, collect, cut and prepare specimens. We travel to gem shows and enjoy meteorites as much now as in the beginning. Please feel free to share any comments you have on this or any of our other sites.
PrevFleischmann Planetarium A must see destination in Reno at the University of Nevada.
An September 1768 Witnessed Fall: Lucé, FranceNext