The law of conservation of mass states that the mass of a closed system will remain constant over time, regardless of the processes acting inside the system. 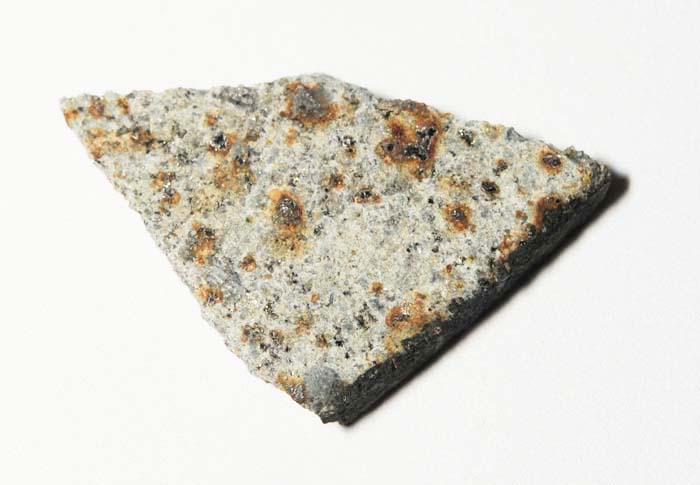 Occasionally, a specimen is offered for sale or trade that stops me in my tracks. Not because of its size, its class or even its value, but instead because its name was synonymous with the history of meteorites. Oh, and also that the specific locality is almost never, ever offered publicly. Such is the case of Lucé.

Like many wonderful meteorite deals I’ve had the pleasure to savor, a recent purchasing frenzy opened a channel of communication that led to a heads-up when new material was advertised. When an alert arrive in my inbox, I copied names and prices into a reply email in a panic, imagining that thousands if not millions of other collectors on the planet were doing the same thing at the same time. The race was on even if only in my mind. With a rapid click of the send button, I began the painful wait.

Checking my email every few seconds, I finally received a calm reply with the information about how to pay for the selected specimens. As if the imaginary race was still on, I shot the money across thousands of miles using the fabulous financial tools of the 2.0 version of the web.

Then, like a child waiting for the cereal box toy order through the mail, I rushed to the mailbox everyday only to be disappointed everyday for the next 10 days. Then the box arrived.

There in my own hand sat a thin, crusted slice of the beginning of formal meteorite science. On Tuesday the 13th of September in the year 1768, a single stone of 3500 grams fell from the sky and was christened Lucé. And it is this stone called Lucé that I now held in my hand. 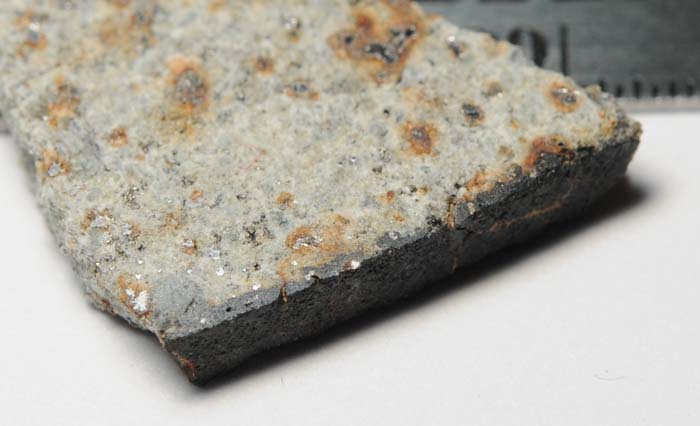 Let’s start at the beginning.

Although hints of the theory of conservation of mass has roots as deep as several hundred years before the common era, and interpreted again in the 13th century, it wasn’t until 1789 when Antoine Lavoisier put into words what we now believe about the conservation of mass.

Lavoisier was a powerhouse in science s well as many other disciplines. Unfortunately for Lavoisier, his paths of law and science somehow led him to the job of a tax collector. And although Lavoisier tried to reform the French tax system in order to help the lower classes, his actions were used against him as things in France heated up near the end of the 1700s. On the 8th of May in 1794, Lavoisier visited Paris for the last time since his head was swiftly and deliberately removed from his body as punishment for being a traitor and apparently for selling watered-down tobacco, serious crime as well.

Some speculate that it was not necessary Lavoisier’s political activities and tobacco hydrating that led to his execution, but instead that he cross the path of one Jean-Paul Marat, a man described as “short in stature, deformed in person, and hideous in face.”

Marat, it is written, spent much time in a bathtub and once, in fear for his life, hid in the Paris sewers. As if that were not bad enough, he was stabbed to death while in his bathtub on July 13, 1793, almost a year before Lavoisier was beheaded.

Those who speculate about such things believe that Marat presented something to Lavoisier, to which Lavoisier then rejected Marat and his “preposterous “scientific invention.”” Later, when Marat moved up the ladder of players in the French Revolution, its seems that the grudge Marat held against Lavoisier blurred the line between personal hatred and law breaking. Regardless, the path to Lavoisier’s execution was cemented. 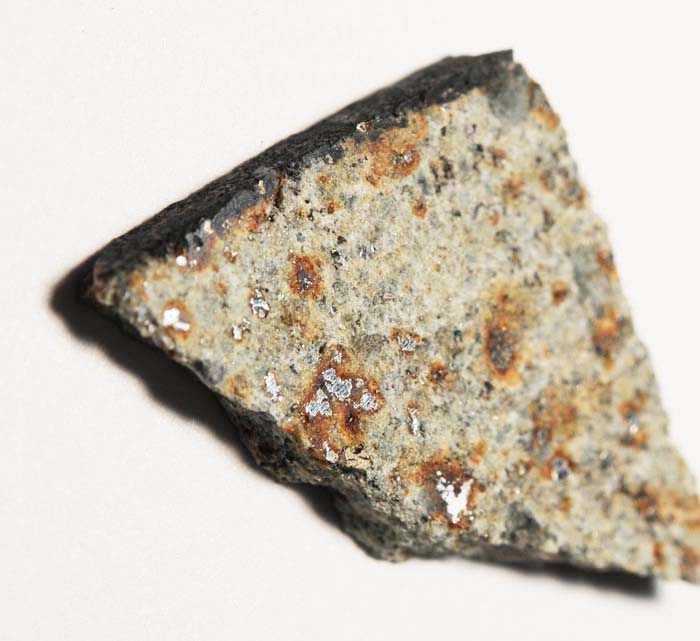 But why, you ask, in this meteorite column am I retracing the steps of notable characters of the French Revolution? Well, it is because Antoine Lavoisier was also among the group of three scientist who were the first to do a formal chemical analysis of a meteorite. And that meteorite just happened to be Lucé.

As the story goes, Lucé fell through a clear afternoon sky arriving with thunderclaps, a loud hissing noise, and no doubt a pretty good thump as it embedded half of itself into the rich soil of France. As yet another stone in history reported to be to hot to pick up, Lucé, presumably after it cooled, was sectioned and a piece was acquired by the Abbé Charles Bacheley who sent it on to the Royal Academy of Science in Paris. Three chemists, one being Lavoisier, were appointed to study the stone. The chemists wrote that the stone “had a thin black crust partially covering an interior of gray cindery material scattered with an infinite number of shiny metallic grains of pale yellowish color.” Their bulk analysis found three main ingredients in the stone; 55.5% vitrifiable earth, 36% iron, and 8.5% sulfur.

All this brainpower and chemical talent interpreted the findings as the stone of Lucé that fell from the sky was not, in fact, a thunderstone; had not, in fact, fallen from the sky; and was, in fact, a fragment of pyrite-rich sandstone that had been struck by lightening. In particular, the lightening removed a thin covering of dirt and melted the surfaced of the stone while not affecting the interior of the rock. Although wrong on pretty much all accounts, the three scientists were the first to come to the conclusion of how the exterior and interior of a meteorite can be of the same material, but wildly different in texture.

Another meteorite was studied with a noted resemblance to Lucé, as was a third thunderstone. Unfortunately, the tax collecting obligations called away Lavoisier and he missed out on this third analysis. As would be expected, the third stone from the sky was quite similar to the previous two. Sadly, of the trio of stones establishing the historical intersection of meteorites and chemistry, Lucé is the only survivor with the scientist all dead, and the other two comparable thunderstones lost to the world. 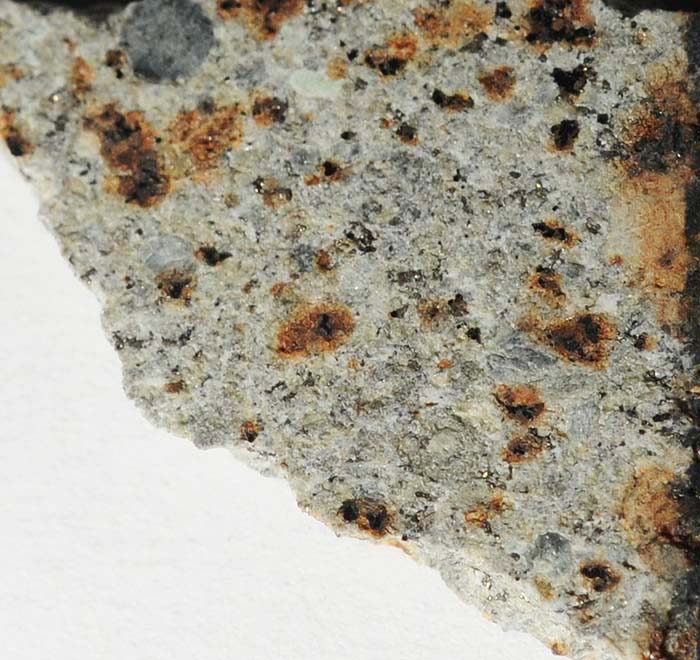 The Conservation of mass of Lucé

An inventory of Lucé around the world led the to the following list complied and submitted to the Meteorite List by Pelé Pierre-Marie. 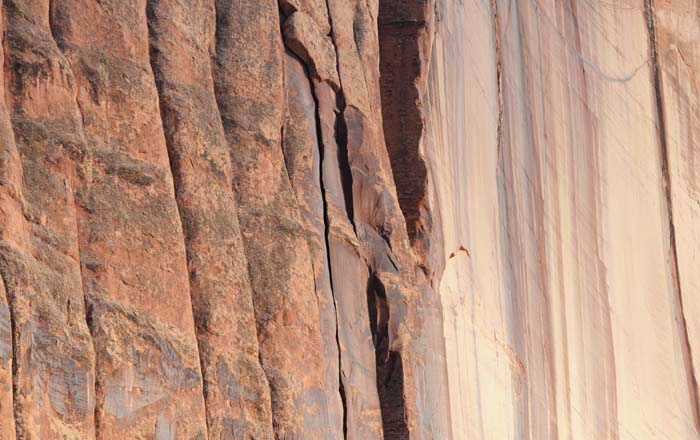 As I sorted through the chain of events in France during Lavoisier’s time, I wondered if yet another example of Einstein’s quote materialized, namely “Great spirits have always encountered violent opposition from mediocre minds.”

In a nutshell, Lavoisier was simply too book-smart for his place in time.

And then to see that in 2009, the fall of the Lucé meteorite was actually used as evidence that conventional science is missing the boat on the existence of UFOs. I wonder if maybe scientists might just want to keep a few extra cans of food in the closest sewer just in case.

Dr. Martin Horejsi is a Professor of Instructional Technology and Science Education at The University of Montana, Missoula. A long-time meteorite collector and writer, before publishing his column "The Accretion Desk" in The Meteorite Times, he contributed often and wrote the column "From The Strewnfields" in Meteorite Magazine. Horejsi is also the Lead Technology Reviewer for The National Science Teaching Association, and just celebrated his 22th year working with NASA and the JPL in education and public outreach (EPO), and is a NASA Solar System Ambassador. Horejsi specializes in the collection and study of historic witnessed fall meteorites with the older, smaller, and rarer the better. Although his meteorite collection once numbered over a thousand pieces with near that many different locations, several large trades and sales and trades have streamlined the collection to about 250 important locations with all but 10 being witnessed falls. Many of the significant specimens in Horejsi's collection are historic witnessed falls that once occupied prominence in the meteorite collections of Robert A. Haag, James Schwade, and Michael Farmer. Other important specimens were acquired through institutional trades including those from The Smithsonian Institution, Arizona State University, and other universities. Horejsi was awarded the Harvey (Nininger) Award in Tucson in 2006, The Brotherhood of Guardians of the Ensisheim Meteorite in 2011, a JPL Inspiration Person, on the JPL STARDUST Team that was awarded the Smithsonian Air and Space Museum Annual Trophy in 2008, and former board member of the International Meteorite Collectors Association, and the Northwest Council for Computers in Education.
PrevAnniversaries
Type 3 Chondrites – Meteorite Micro VisionsNext