A Meteorite by any Other Name…

A METEORITE BY ANY OTHER NAME…

(The second in a series of articles for the beginning collector)

What do the names Brownfield (1964), S98175, NWA 860, Taza, Bensour and Oum Rokba all have in common? You’re right, absolutely nothing, but for very different reasons. And, what about those numbers like (S2) (W0) (Fa24) and so forth, that you read associated with the name on the label?

In the authentication process a newly found meteorite, or suspected meteorite, is first classified. This must be done by a qualified person, one who has the academic credentials, usually a geochemist who has, as well, the skill to discern the petrologic type under the petrographic microscope, ( a number that ranges from 3 to 7). The lower the number, the more we say the meteorite is unequilibrated, or primitive, in that the material retains more of its original cosmic structure. As the numbers increase, the meteorite is said to become equilibrated. The minerals are altered and usually, but not necessarily always, the chondrules become increasingly less distinct until there is no evidence of any chondritic structure. 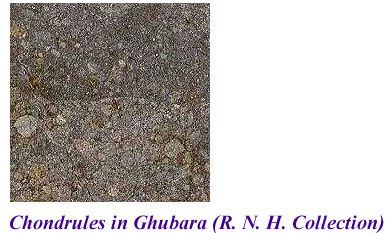 One might think that it would be possible to match a specimen under the microscope with a series of reference photographs to make the job easier. However, this is not the case. In determining the petrologic type, researchers from different institutions May even use somewhat different criteria for examining differences to ascertain this. Some May look critically at the details of pyroxenes; others May look at other criteria. Thus, it is both a science and an art, and not necessarily absolute.

The second step is to take a number of readings across a thin-section (a small amount of the specimen that has been ground to a uniform thickness of 0.03 mm (0.001 inch), and then carefully polished and carbon coated). The readings are taken with an instrument known as an electron microprobe. With this, one can determine whether the specimen is low total iron (LL), low iron (L) or high iron (H) and the fayalite number (Fxx) [These will be discussed in the next issue].

After this is done and an amount of material is taken for archival purposes (usually the lesser of 20 grams or, in the instance of very small specimens, 20%,) the information is dispatched to the Nomenclature Committee of the Meteoritical Society, where a committee approves and assigns a name or number to identify the uniqueness of the specimen.

When submitted to the laboratory, a meteorite (or suspected meteorite) is given a provisional, or working, name or number. Because so many meteorites are being found in Northwest Africa, they are first assigned provisional numbers, such as NWAxxx, where xxx is a sequential numbering system which started with 001 and presently has passed above 1000. Keep in mind that these are only “working labels”. Until the classification, the meteorite is said to be unclassified. In fact, a number could, and sometimes is, given to a specimen that turns out not to be a meteorite at all. So, such a label, technically, is meaningless in documenting the authenticity of a meteorite. In fact, some specimens May LOOK LIKE a meteorite, but turn out to be “meteorwrongs”. Until the Meteoritical Society officially designates a name or number, a specimen May not be referred to in a scientific paper.

Look at examples below.

If you were to encounter any of the four specimens shown, would you be able to determine which are meteorites? Look at (A): The black crust and ivory interior reminds one of a type of meteorite called an eucrite. But, in fact, it is not a meteorite and the black is not a fusion crust. Now examine (B): It looks very uninteresting. Yet, that bit of black crust you see at the edge is real fusion crust. It IS an eucrite. What about (C)? We see metal grains and this reminds us that we are told that terrestrial rocks don’t contain metal grains, only meteorites. But, we are wrong. This look-alike mesosiderite is an imposter, now known to most collectors. It’s called Putoran Plateau, sometimes referred to as “iron-in-basalt”. It May very well be more valuable than many meteorites as it is a very rare iron-rich basalt. (D) also looks something like this, and we also see iron grains as well in a similar black matrix. But this time it IS a meteorite called Clover Springs (a stony-iron called a mesosiderite).

Buying a rock with a number May be meaningless if the number represents a provisional number. (Ask for its classification and where it was done.) In reality, reputable dealers with a good track record will have sufficient experience to spot the difference for most except the most unusual.

In 1998, the Labennes, one of the leading meteorite sellers from France, began offering large numbers of meteorites from the Sahara. Many of these were unclassified. Here, another unique labeling system emerged. The Meteoritical Society allowed them to label each specimen with its own unique number, beginning with 97001 (the first year this was done). This continued through and after the year 2000, with the numbers beginning with 00001 for the first to be labeled in that year. While many, especially the rarer varieties of Saharans have gone through the analytical process of authentication, an even greater number have not. They are, nevertheless, recognized only as meteorites. Their names are not provisional, they are official, but they carry no classification information.

Prior to the great African Meteorite rush, as it will probably come to be known to historians, a meteorite was (and still is) named after the nearest postoffice, i.e, a town or city within a few miles of where it was found. If the location was too remote from a populated area it is named after a prominent geological feature; hence, names like Canyon Diablo (2 miles west of the Barringer Meteorite crater), Pinto Mountain (California), and so on. If a second, and unrelated (said to be unpaired) meteorite is found near the same location, the name May have as a suffix such as [Brownfield (1964)]. (Note also the specific reference to the word “found”. A meteorite might have been moved from its place of fall and relocated by tribes, rock hounds or others, not knowing their interesting rock was indeed a meteorite. Then, years later it May be recognized. Such are the Lafayette Nakhlite (Martian) meteorite, first recognized in a Purdue University Geology collection, and the Los Angeles (another Martian meteorite), recognized by a collector in his own backyard rockpile, but only after 20 years of rock collecting and obtaining a degree in geology in the interim! Under such circumstances the meteorite takes the name of the place where it is first recognized.

More recently, unofficial names, or pseudonyms, have begun to emerge. Examples are Taza (not a recognized name by the Meteoritical Society. It is really NWA 859), Tarfrawet (NWA 860) and Tissemoumine (NWA 725). The well known Oum Rokba was classified, but due to an apparent communications glitch, was never submitted for even a NWA provisional number. It is, however, a very nice meteorite for collectors and  eventually should receive an official name or number. The newly recovered fall Bensour is already on the market with the finders’ “proposed name” This is a “working name” until it is acted upon or given a NWA Number.

Next time: What about those other names you find on a meteorite’s label, the LL, L, or H, and the (S_), and (W_) and that fayalite number? They May mean more than you think.

Paul is the webmaster for all of The Meteorite Exchange's websites including Meteorite Times Magazine. His fascination with all things space related began as a young boy during the Space Race. His free time is divided between meteorites, astrophotography, webmaster, and the daily operations of the ecommerce website www.meteorites-for-sale.com.
PrevAN INTRODUCTION TO METEORITES AND METEORITE COLLECTING
Some Fundamentals of Common Chondrite ClassificationNext