Some Fundamentals of Common Chondrite Classification

Some Fundamentals of Common Chondrite Classification

Third in a series of introductory topics for the new meteorite enthusiast!

In our last article we discussed the process of authenticating and naming meteorites.  I also suggested that we are experiencing an exciting era where meteorites are becoming commercially available more rapidly that they can be classified and have their names (numbers) approved by the Nomenclature Committee of the Meteoritical Society.  Dealers will advise buyers that a name (note a) is provisional, or accepted and pending.  Once approved it will appear in The Meteoritcal Bulletin.  Listings are updated periodically and May be seen at

http://groups.yahoo.com/group/MeteoriticalBulletin.
Archive listings (back to 1970) are found at:

Along with listings, one will see, following the name, class and place of fall (coordinates), designations for shock (S), weathering grade (W) or (WG), and (Fa), fayalite (molecular %).  Sometimes these data will also be stated on the dealer’s label.  This is important information which tells a great deal about the meteorite and its history, and should by noted by the collector when selecting his choices in the marketplace.  We need to state first (but briefly) something about the composition of meteorites.  Meteorites are composed of nickel-iron and/or (silicate) stony materials.

There are five major groups of meteoritic minerals, each characterized by its general chemical formula (Leonard, 1954):

(a) The Nickel-Irons (kamacite, taenite and plessite (the latter being a mixture of the first two).

(b) The olivines [primarily fayalite or fosterite, usually a combination thereof: (Mg,Fe)2SiO4.

(c) The pyroxenes (including enstatite, bronzite and hypersthene) which are iron-magnesium silicates, and a few others.

Here, we are interested in the olivines.  Olivine is not a specific mineral, but two that vary in their compositional makeup between Iron (Fe) and magnesium (Mg). The olivine varies between 100% (Mg2)SiO4 and 100% (Fe2)SiO4, the former being fosterite and the latter fayalite.  The mineral is said to be a “solid solution”, a term which means that in the crystalline lattice (arrangement) of the atoms making up its molecular structure, iron and magnesium can easily replace one another.

The fayalite number is the ratio of fayalite/fosterite in olivine.  It is especially useful in pairing meteorites that are found in close proximity to determine whether they are a part of the same fall. (note b).

Readings are done on carbon-coated polished

thin sections using an electron microprobe. A number of readings are taken over the entire thin-section to average values.  The result then determines whether the meteorite is an H, L, or LL.  This is the only use of the microprobe in the classification process.  Petrologic types (article #2) as well as (S) and (W) values are determined under the microscope by the experienced researcher.

The question has been asked whether H’s can deteriorate into L or LL’s.  The answer is absolutely not.  Each of these groups has a completely different history of formation. For example, the H’s are considered to have formed nearest Earth but farther from the Sun than Earth, followed by the L’s, then the LL’s [at increasing solar distances] (Wasson, 1985), with the LL’s being most oxidized (Sears, 1978).  The H’s, L’s and LL’s are different in other ways, as well, in addition to their iron/magnesium ratios.

Shock is a measure of the degree of fracturing of the matrix, produced by accretion, such as two small bodies in space, or a meteoroid and larger asteroid.  Most probably, what we see is the result of impact of a small meteoroid into the basin of a crater on a much larger asteroid (Stoffler, 1991).  Smaller bodies colliding with one another would not have sufficiently great impact velocity to produce the pressures and temperatures required to produce shock effects, due to their lesser gravitational attraction for one another.  High instantaneous pressures, in excess of 5 GPa (1 Gpa = 10,000 atmospheres, or ‘bars’), are necessary to produce what is called shock metamorphism.  Brecciation, seen frequently in common chondrites, could not be the result of very small bodies accreting.  More probably, in brecciated chondrites we see the history of a small body having struck and mixed with the regolith material already present as a pre-existing mix on the surface of a larger asteroid.

Following is
a summary of the stock stages developed and stated by D. Stoffler, K. Keil and
R. D. Scott:

S2: very weakly shocked
(5-10 GPa); uneven darkening of olivine as seen under polarized light; planar and irregular fractures, (breaks in other than a natural cleavage plane)

Greater shock pressures will melt the rock, producing what is referred to as an “impact-melt”.  Seldom would these reach Earth (Stoffler, 1991).  True impact melts are very much sought after by collectors!

The fracturing of olivine crystals and other features must be observed under a microscope with shock effects observed under polarized light.  Larger structures, such as shock veins are visible to the eye.  Many of the shocked veins formed at the boundaries of polished surfaces of brecciated specimens exhibit beautiful spider-web-like structures. 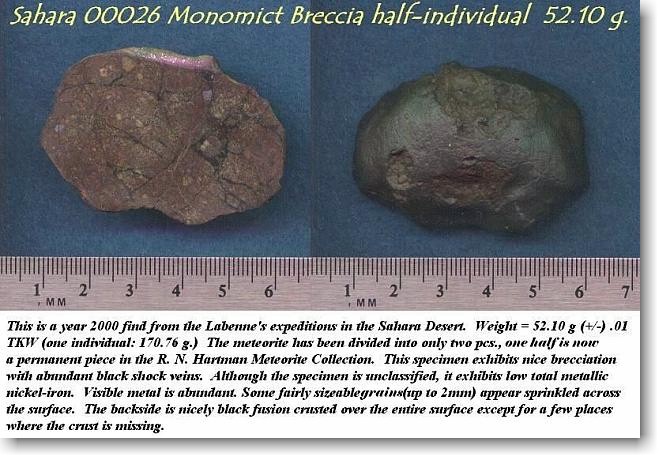 ‘Weathering’ is meant to imply chemical weathering, which takes place within the interior of the entire meteorite, as opposed to the cracking and deterioration we see near the surface due to proximity of the elements (wind, water, temperature, etc.)  Here, again, we have a weathering scale.

The weathering scale developed by F. Wlotzka (1993), and accepted for use by the Meteoritical Society, is summarized here:

A meteorite usually exhibits this unique condition if recovered only very soon after falling, and before any of the elements can  do their “dirty work”.  You May have read of some dealers offering their new Bensour LL6 [working name, official name not yet assigned] which was seen to fall on both sides of the Morocco-Algerian border on Feb. 10, 2002, as having been recovered “before it rained”.

W3:  heavy
oxidation of nickel-iron and troilite; 60-95% being replaced.

W4:  complete
oxidation of metal and troilite; silicates not yet altered.

W6:  massive
replacement of silicates by clay minerals and oxides.

Note a:  Hereafter in this series, a name will mean to refer to a number if a meteorite has been assigned a number instead of a name.

Note c:  Ringwoodite is an altered crystalline form of olivine.  Substances that are chemically the same but have different properties, such as crystal structure, density and hardness, are said to be dimorphous.

Paul is the webmaster for all of The Meteorite Exchange's websites including Meteorite Times Magazine. His fascination with all things space related began as a young boy during the Space Race. His free time is divided between meteorites, astrophotography, webmaster, and the daily operations of the ecommerce website www.meteorites-for-sale.com.
PrevA Meteorite by any Other Name…
Update on NWA Meteorite ClassificationsNext