The article that appeared in the 2009 November
issue of Meteoritics & Planetary Science. 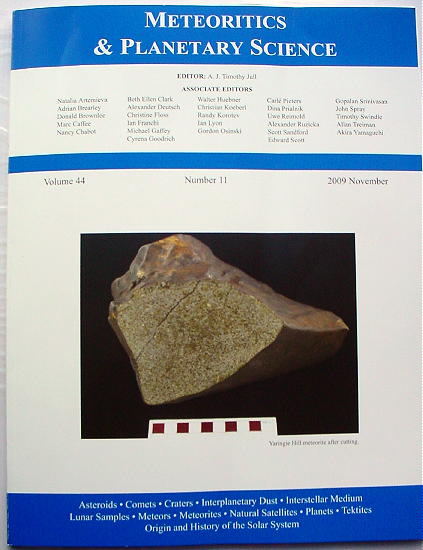 When I first saw the image of the Yaringie Hill meteorite on the cover of the 2009 November issue of Meteoritics & Planetary Sciences (M&PS), I have to admit that I didn’t know that it was an Australian meteorite. But I quickly found this to be the case when I turned over the journal to read the Table of Contents, and there at the very top of the table was the lead article:

“The mineralogy of the Yaringie Hill meteorite — A new H5 chondrite from South Australia”
by B. Tappert, J. Foden, and A. Pring

It really caught my attention to see an image of an Ordinary Chondrite grace the cover of MAPS, as well as be the lead article. Other than being a meteorite from Australia, I was curious to find out what was so “special” about this H5 chondrite, so I read the article immediately. Although what I read was a well-written paper that thoroughly described this “recent” 2006 find and successfully made its case that the Yaringie Hill (YH) meteorite “is not related to any of the other meteorites described from the Eyre Peninsula”, I failed to find that “special” feature about this meteorite that would prompt the editors to place this article with such prominence in their journal. And now, more than a year later, I am still so curious that I am prompted to write about it.

Maybe it was the very fact that some researchers went to the trouble to write a paper about an H5 chondrite that made the YH article “special” in the eyes of the editors. Given the current surplus of much rarer meteorites, and the backlog of classifications and papers to be published by meteoriticists, it may have been a breath of fresh air for the editors to see an article submitted that harkens back to the days of the earlier journal, Meteoritics, when articles about “recent aerolite finds” were the norm and not the exception, as they are now. I’m not saying that there is a surplus of meteorites found in Australia, because the Meteoritical Bulletin Database only lists less than 20 meteorite finds since year 2000 for that continent!
But obviously someone (or some people) felt a need to write this paper.
At this point my attention is drawn to the authors of this M&PS article.

Prior to this article, Ralf Tappert, the “first-author”, and John Foden had never written an article about meteorites. Although they wouldn’t be considered meteoriticists, they are well-established and well-published Australian mineralogists. The co-author, Allan Pring, appears to be the connection to the Australian meteoritical community, or at least was very actively involved 20 years ago. Back at that time Dr. Pring was the co-author of several papers that described the mineralogy of the Loxton (H6), the Mangolo (L6), the Streaky Bay (L4), the Ethiudna(L4), and the Crockers Well (LL7) meteorites. In that same time period (20 years ago) he was co-author with A. Bevan on the article titled, Guidelines for the Naming of New Meteorite Finds from the Nullarbor Region, South Australia. All of these articles in which he was a co-author were published in the Meteoritics journal. More recently Dr. Pring co-author on a paper written by G. Horr describing the Kimba (H4) South Australian meteorite in 2005. In 2008 Dr. Pring joined (or re-joined?) the Meteoritical Society.

Dr. Allan Pring is the lead mineralogist for the South Australian Museum (SAM) mineral collection, which contains meteorites from 150 localities and is the lead researcher for the Mineralogy Research Group. The type specimen and the main-mass of the Yaringie Hills meteorite is a “recent” addition to this mineral collection. Having been the co-author on papers for so many prior Australian meteorite finds, it’s not surprising that Dr. Pring would be the co-author on a paper describing the mineralogy of the most recent addition to the SAM meteorite collection.

Ralf Tappert and John Foden are identified in the Yaringie Hill article as being members of the faculty at University of Adelaide, Geology and Geophysics, School of Earth and Environmental Sciences, 5005 South Australia, Australia. These three authors should receive some sort of recognition for taking the initiative to write (and get published) the Yaringie Hill mineralogy article at a time when other meteorite specialists, and the more established meteoriticists, were too busy researching the “higher profile” meteorites with the rarer mineralogy. It just might be that they did receive that “recognition” when the editors of M&PS placed the image of Yaringie Hill on the cover of their journal and made it their lead article.

The YH meteorite was found on October 18, 2006, by Dr. Peter Hudson (an entomologist) while conducting a faunal survey. In other words, this find was NOT made during a meteorite-recovery effort. The faunal survey was funded by the Waterhouse Club of the South Australian Museum. There was some additional financial support provided by the Australian Research Council (ARC), but the classification and publishing of these results was primarily a volunteer effort.

The YH article was received by the editors of M&PS on 26 May 2009. A subsequent revision was accepted on 24 July 2009. The Meteoritical Bulletin #96 was “published” with a “September 2009” date. At some point in time prior to September 2009 it would have been impossible to make a revision, correct a typographical error, or make a last minute change to a meteorite’s classification. The MB#96 appeared “in print” when Meteoritics & Planetary Science Vol. 44, Nr. 9, Pages 1355–1397 was published in November 2009.
Although it wasn’t mentioned in this M&PS article, the Yaringie Hill chondrite was listed as H6 when the Meteoritical Bulletin #96 (Table 9 – page 48) was published. The YH article did describe in detail (under the “Classification” paragraph) their petrographical evidence for determining a “type 5 classification” versus a type 6 petrologic grade.
[A quick read of that paragraph would serve as a good review of the current conventions used in determining “where to draw the line” between petrologic grades 5 and 6.]
To the best of my knowledge, there has been no “Correction” appearing in print in a subsequent Meteoritical Bulletin (other than the Database) to formally change the YH classification from H6 to H5.

One final thought (almost as an aside), but maybe this “revision” to the YH classification was the impetus that prompted the editors to place the YH article with such prominence in their journal? Whatever the reason, I would like to see a return to the “new chondrite find” articles like this one that harkens back to the days of the old Meteoritics journal. I would like to collaborate with a couple of mineralogists in order to publish some articles about the “mineralogy of a new chondrite find”. I’ve got a number of North American equilibrated Ordinary Chondrite main-masses that we can write about, so contact me!

In conclusion, I must admit to being very jealous of the Yaringie Hill meteorite (- the “new” (H5) chondrite from South Australia), because I wish that some North American ordinary chondrites would receive the same attention.

Link to the Meteoritics & Planetary Science (M&PS) website for the November 2009 article:
The mineralogy of the Yaringie Hill meteorite —A new H5 chondrite from South Australia …

List of all “Australian” meteorites in Meteoritical Bulletin:
http://tin.er.usgs.gov/meteor/metbull.php?sea=L4-6&sfor=types&stype=exact&lrec=50&srt=

Link to a story about an Australian meteorite find and how it came to be confiscated, as told by finder on the Australian Gold Detecting and Prospecting Forum.
The reaction to this story is a good example why meteorite finds in Australia are no longer being reported by their finders.
This find came to be known as the Kimba (H4) Meteorite.
Here is the link to Allan Pring’s paper describing Kimba (H4) and to its entry in the Meteoritical Bulletin #82.

Direct link to article for subscribers:
The mineralogy of the Yaringie Hill meteorite – A new H5 chondrite from South Australia. (2009) Meteoritics and Planetary Sciences 44, 1687-1693.
Tappert, R., Foden, J., Pring, A.

Bob is a retired aerospace engineer living in Southern California, and has been recovering meteorites from the Southwest U.S. Deserts since 1995.
PrevIMCA – April 2011
Surprises In Unclassified MeteoritesNext