One of the most rewarding and exciting parts of studying meteorites is being able to participate in public outreach events. At such events, I enjoy placing a piece of the Allende meteorite in someone’s hand and saying something like, “this is the oldest thing you will ever touch!” Their eyes grow wide with excitement as they ask: “Really?” “How old?” “How do you know how old this is?” Their questions launch many interesting discussions. One of the ancient objects contained within Allende, and meteorites like it, are called calcium-aluminum-rich inclusions (CAIs). These were the first solids that formed out of the hot (>1300 K) gas and dust “soup” of the early Solar System (Scott & Krot, 2014; Figure 1). It is truly incredible how microscopic, dust-bunny-like condensates can survive 4.567 billion years (Connelly et al., 2012), relatively unchanged, and eventually make their way to Earth; it boggles my mind that we can touch these tiny pieces of Solar System history.

We have learned a great deal about CAIs in the past 40 years from observing their petrographic characteristics and by measuring the abundances of the elements they are made from. Because they formed so early, CAIs record evidence of isotopes of certain elements (called short-lived radionuclides) which no longer exist today, like how a fossil of an ancient creature shows us evidence of a past environment much different than Earth today. So, in studying CAIs, we can learn about the environment of the Solar Nebula which eventually grew into our modern Solar System.

For my part of this work, I study short-lived radionuclides of beryllium and aluminum that have long since decayed away. The short-lived radionuclide 10Be decays to 10B with a half-life of ~1.4 million years (Davis & McKeegan, 2014). This radionuclide is special because it can only be made during spallation. To understand spallation, imagine the break (the first shot) in a game of billiards; here the cue ball is a high energy particle and the gathering of billiard balls are the protons and neutrons of an oxygen atom. Unlike a break in real billiards where each colored ball is separated individually, in ‘cosmic billiards’ the subatomic particles clump to form various sized atoms, one of which may be 10Be. This violent process can occur in many environments during Solar System formation to create 10Be, such as: (1) in the collapsing protosolar molecular cloud galactic cosmic rays interact with ambient nuclei (Desch et al., 2004), (2) in the hot midplane of the disk high-energy particles from the young Sun collide with either ambient solar gas or with CAIs (Liu et al., 2010), or (3) in a relatively low-mass supernova neutrinos react with ejecta (Banerjee et al., 2016). In quantifying the initial abundance of 10Be in CAIs, we hope to determine which of these events took place in shaping our early Solar System.

The other short-lived isotope I study in CAIs is 26Al, which decays to 26Mg with a half-life of ~0.7 million years (Davis & McKeegan, 2014). Similar to 10Be, 26Al can form by spallation, but it is generated less efficiently. But unlike 10Be, 26Al can also be produced in stars when they are in their death throws (either in Wolf-Rayet winds or supernovae explosions; Dauphas & Chassidon, 2012). Previous researchers think that most 26Al was incorporated into the Solar Nebula at the same time, which makes this radionuclide valuable as a chronometer to age date CAIs and other Solar System materials. But the details about the origin of this radionuclide are muddled; we hope to clarify this by analyzing 26Al along with 10Be in the same CAIs. The interplay between 26Al and 10Be is very important in understanding how each CAI received its budget of short-lived radionuclides.

To decipher the complex environment of CAI formation, it is necessary to obtain 10Be and 26Al measurements from as many different types of CAIs as possible from different carbonaceous chondrites. But, since these isotopes no longer exist, how do we measure their abundances to determine their astrophysical origin and role in Solar System formation? First of all, when the parent products decay away they produce the daughter products in higher abundances than normal. By comparing to a stable isotope, we can use the overabundance of the daughter product to deduce how much original radioactive nuclide there was. The instrument of choice to do this is a Secondary Ion Mass Spectrometer (SIMS) because it is excellent at in situ measurement of low concentration isotopes. Let’s focus on 10Be; we measure isotopes 10B, 11B, and 9Be and if we observe a correlation between 9Be/11B and 10B/11B, we calculate the slope which is equivalent to the 10Be/9Be ratio. We have successfully achieved this using SIMS instruments at ASU (IMS-6f; Figure 2) and at UCLA (IMS-1290) in collaboration with Dr. Ming-Chang Liu. An extra necessary step in SIMS analyses to calculate accurate 10Be/9Be ratios is to measure well-characterized standards before and after the CAIs. The reason for this is that Be is more efficient at ionizing than B, and also 10B and 11B fractionate slightly while traveling around the magnet. It is important to have a correct standard that has a similar composition to the CAIs. Because one did not exist, I synthesized my own melilite composition (Ca2(Mg,Al)(Si,Al)2O7) glass standard by mixing together oxide powders and placing them in a small platinum bucket in a furnace at temperatures ~6 times hotter (1600 °C) than a conventional kitchen oven (Figure 3). After characterizing the standards by measuring their major and minor elemental abundances with electron microprobe and inductively coupled plasma mass spectrometry, we could determine the SIMS correction factor.

With these new and improved standards, we have been able to show that CAIs record an enormous range in the 10Be/9Be ratio; almost an order of magnitude! This range encompasses measurements from different flavors of CAIs and these results suggest that some CAIs may have inherited a low level of 10Be from the parent molecular cloud and did not experience much irradiation later on, whereas other CAIs condensed from intensely irradiated material. The abundance of initial 26Al in the same CAIs does not appear to be correlated to the large variation in initial 10Be (Dunham et al., 2017). This indicates these two short-lived radionuclides could not have formed by the same mechanism meaning most 26Al was not produced by irradiation. We are continuing to measure 10Be and 26Al contents of additional CAIs from a variety of carbonaceous chondrite classes in order to generate more informed models.

If you imagine the age of the Solar System (~4.5 billion years old) corresponds to the age of the oldest person you have met (~100 years old), CAIs formed within about the first 3 days respectively of their life. Even though this is such a short snapshot, the early violent events during this time and place set the stage for the remainder of Solar System formation.  In this way, it is imperative for us to understand better the formation environment of CAIs, through radionuclides such as 10Be and 26Al.

The Brian Mason travel award is sponsored by the International Meteorite Collectors Association for the 2017 80th Annual meeting of the Meteoritical Society. This research was funded by the NASA Earth and Space Science Fellowship (NESSF) to E. T. Dunham (NNX16AP48H) and the Emerging Worlds grant to M. Wadhwa (NNX15AH41G). This work was conducted using SIMS at ASU (6f) and UCLA (1290) as well as the high temperature furnace in the Depths of the Earth Lab and the ICP-MS at ASU.

Dauphas N. and Chaussidon M. 2012. A perspective from extinct radionuclides on a young stellar object: The sun and its accretion disk. Annual Review of Earth and Planetary Sciences 39: 351-386. 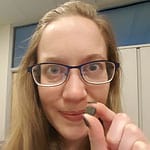 Emilie Dunham is a 4th year PhD candidate at Arizona State University and part of the Center for Meteorite Studies (https://meteorites.asu.edu/) lead by Dr. Meenakshi Wadhwa. Prior to this, she obtained a B.S. degree in astronomy (minors: geology, physics) from Case Western Reserve University in 2014. Emilie’s research interests in Planetary Science range from Kuiper belt objects to martian meteorites to early Solar System condensates; in modeling and/or measuring the elemental and isotopic abundances of these objects, we have a chance to learn about the events and conditions that led to their formation. Her NASA Earth and Space Sciences Fellowship project is focused on using SIMS to infer the abundance of short-lived radionuclides 10Be and 26Al in CAIs to constrain the astrophysical environment in which our Solar Nebula formed. Emilie will soon be looking for a postdoctoral position in related fields. Website: https://sites.google.com/asu.edu/etdunham/home Research Gate: https://www.researchgate.net/profile/Emilie_Dunham
PrevCanyon Diablo Spheroids
Norm’s Tektite Teasers: (Part one of three): Indochinites: The ClassicsNext