Middle of the summer is always the time when we stay home and avoid the heat of the dessert. But, have no fear we will get back out and hunting in the fall. So I have been spending a lot of time cutting meteorites and that has been great fun.

I had been having a several year long love affair with continuous rim diamond blades but after getting a very bad batch from a major manufacturer I decided to go back to the blades that have the diamond pressed under notches made around the rim. I was getting actually only three cuts out of the continuous rim blades of the last batch I bought. I had used these notched blades years ago and had liked them, but changed when the continuous rims came out and was happy till this last batch. I am even more delighted with the notched type so I will be using them for a long while. And at about 35-40 percent of the cost of continuous rim blade they are a real bargain.

So this month I will be showing off some of the material I have been finding as I cut these unclassified NWAs. I am always surprised by how plain and even ugly some of them are until you cut them. Then the OHs and AHs that could be heard when I see the inside. I cut one particularly unattractive stone last week. One edge was very friable so I had to be pretty careful not to have it crumble too badly in the saw. A picture of one of the slices is shown below. It has some huge chondrules in it. Many between 3 – 5 mm in diameter. Most are radial pyroxene and you would be correct to ask how I know. Well, if you cut and lap meteorites just right, radial chondrules will shine under bright light and you can see the rays spread across them. And when they are as big as the ones in this meteorite it is really cool to not need more then a hand lens to enjoy them. 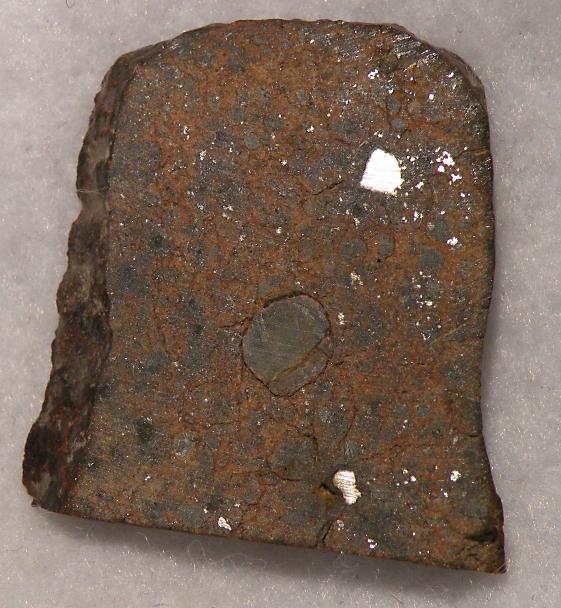 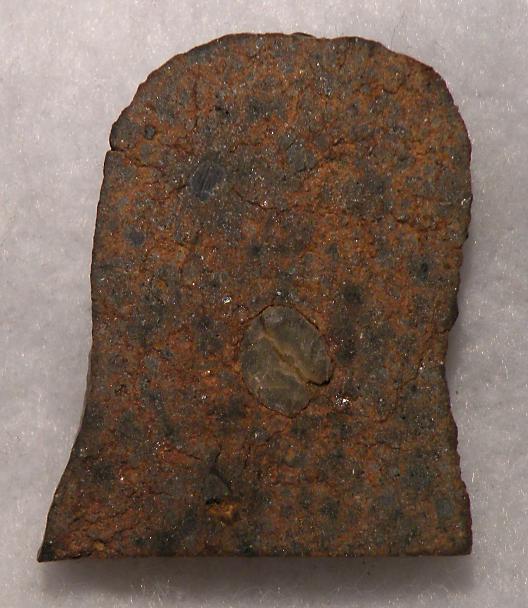 I think many of my readers are familiar with NWA 869. It is really quite a remarkable meteorite. First, it was available in truly vast amounts. It is still easily available to collectors. It was very challenging to look at and try to figure out what classification to put it in. Even today the range of the lithologies in it is discussable. I have it recorded in my database and my specimen cards as L3.8-6. But, I have seen a variety of descriptions. This stems from it being a very brecciated meteorite. There are bits of nearly anything you can imagine in it. Well, I came across one in my cutting this last month that was even more interesting then NWA 869. From its external characteristics of being much fresher with great fusion crust I am confident it is not NWA869. Yet, when I cut it the brecciation made me think of NWA 869. In our world today it is unlikely that visual pairing will every be sorted out officially with lab work. My opinion is still that it is a different meteorite but similar. I offer the following picture that shows breccia as the textbooks describe it. Angular pieces of other rocks mixed in matrix to form a new rock. Angular is the characteristic that we often do not see so well. In this stone the sharp corners were prominent. 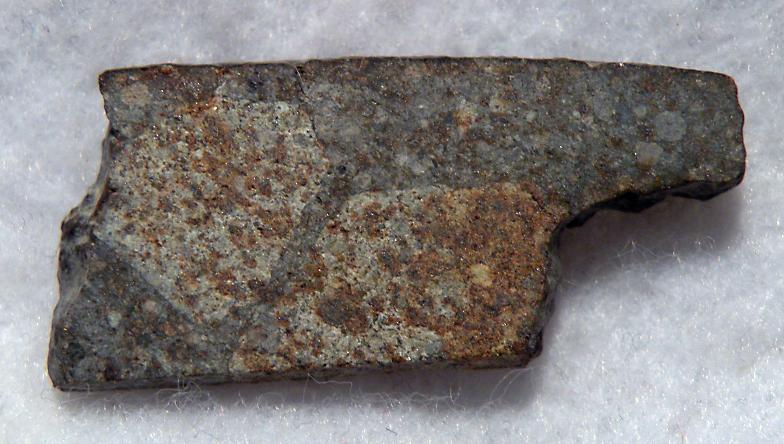 Now I have written on really ugly meteorites before, how they are always full of surprises. Well, a friend had some stones for a great price and when I saw them I knew he had told the truth about how ugly they were. Most of the pieces in the box looked little like meteorite. I am certain I would have passed them by in the desert when hunting. Others had some relic fusion crust and looked a little better. There were lines of yellow and green on the sides of some suggesting that they might once have had algae on them. I expected when I cut them to find a totally weathered metal-free old meteorite. I had put a magnet on a few pieces and the attraction was quite weak. But, once again you just can not judge a stone from its outside appearance. There were some that did have just a scattering of tiny sparkles of metal remaining, others however, had lighter colored matrix with classic H chondrite metal content spread across the cut face. There were visible chondrules of 1-2 mm in diameter that were not in well defined condition. So perhaps a type 5-6 would be my guess. I will have plenty of fun working with this material over the next few years. 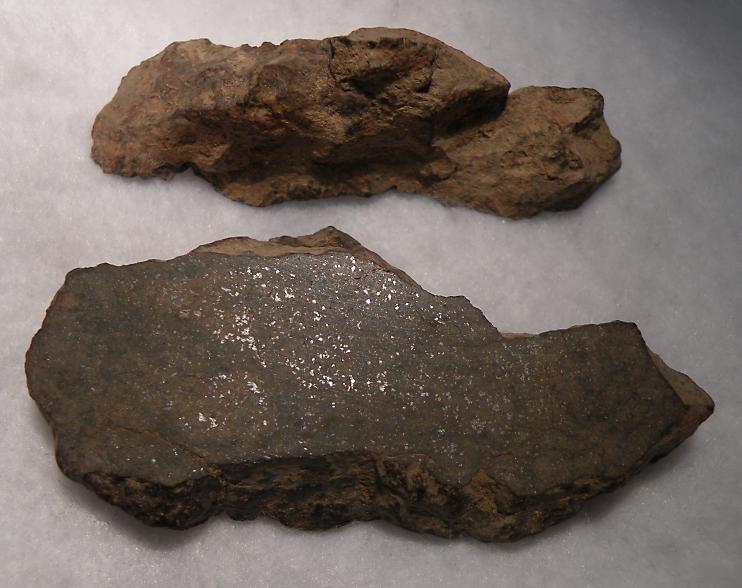 With a week or so having passed since beginning writing this I put about 200 cuts on the first of those blades. While doing a hand held cut it pinched up and got slightly dished. So I am on blade number two of the batch and very delighted by their performance. They cut fast and straight and are not bothered by metal, though you can tell when you hit big metal by the slight slowing of the cut. The blades are made of plain steel however, and that means that I have to drain the saw after cutting . So I am using a lot of coolant water and accumulating a considerable amount of cutting mud which I allow to settle and then dry. With a stainless steel blade I would not worry so much about draining the saw and the mud would stay in the saw at the bottom of the coolant tank.

I have not had enough inspiration as to what to do with all the cutting dust that I am recovering. I have not had time to do some of the experiments that I want to do. But, the list right now includes glaze coloring for ceramics, pigments in paints and inks and of course I am using it already in my papermaking as a coloring and magnetic additive. Have not tried to sell the dust but, others are doing that, and we may do that someday as well. It seems like a shame to just dispose of the cutting dust as if it was from regular rock.

The cataloguing of my unclassified meteorites continues and I told readers a couple months ago that I would keep them posted as the database grew. I have numbers painted on 76 stones at this point with descriptions and weights for them recorded. I have more to do mostly in a display case and then I think I will have the vast majority of all my meteorites in their respective classified and unclassified databases. Now my problem of careful storage remains. I have been accumulating wooden boxes; the kind delicate instruments used to be stored in. I will use them with foam for some of the big specimens and others will be stored in number order in plastic compartment boxes. Many will continue to be on display. Unlike the classified and historic specimens in my collection I worry less about exposing these unclassified to the enviornment. And none has ever shown any effects of being on display.

Well, I guess I will end with one of the nicest unclassified that I have stumbled across in the last few years. The number of really fine meteorites to be found in every dealer tent in Tucson had dropped to near zero from a couple years earlier where at least one meteorite was obligatory. On an early morning stroll I found this one stone remaining in a tent full of craved fossil ashtrays and quartz crystals. As soon as I saw it my mind screamed El Hammami. I have cut a lot of the real thing in the past and it is quite unique with its metal veins and dark chondrules. I know I can not list it as El Hammami in my catalogue but its beautiful fresh fusion crust, abundant metal, dark easy to see chondrules made it a meteorite I wanted to get. It was a little more money then I wanted to spend on an unclassified stone but really it was only thirty cents or so a gram. Still a good buy. So here it is for your enjoyment. I could see the metal veins running through the broken surface, I made a nice window on it after getting home from the show. The total weight was near 500 grams. The main piece in the photos is still 478 grams. In the photo of the cut face please note the thickness of the fusion crust and the very straight shock line running through the whole stone. 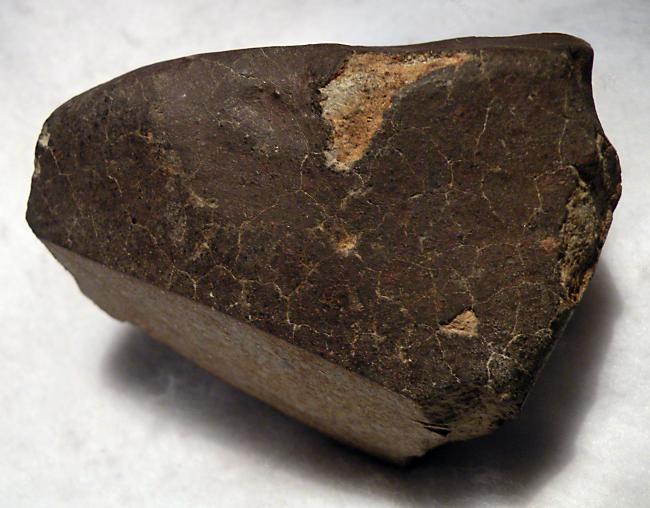 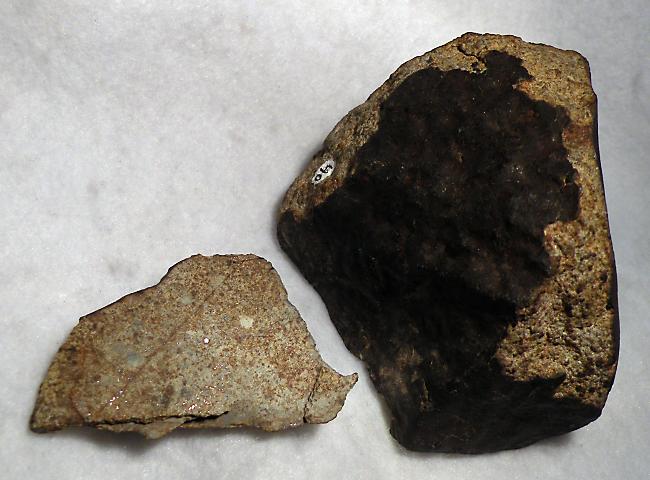 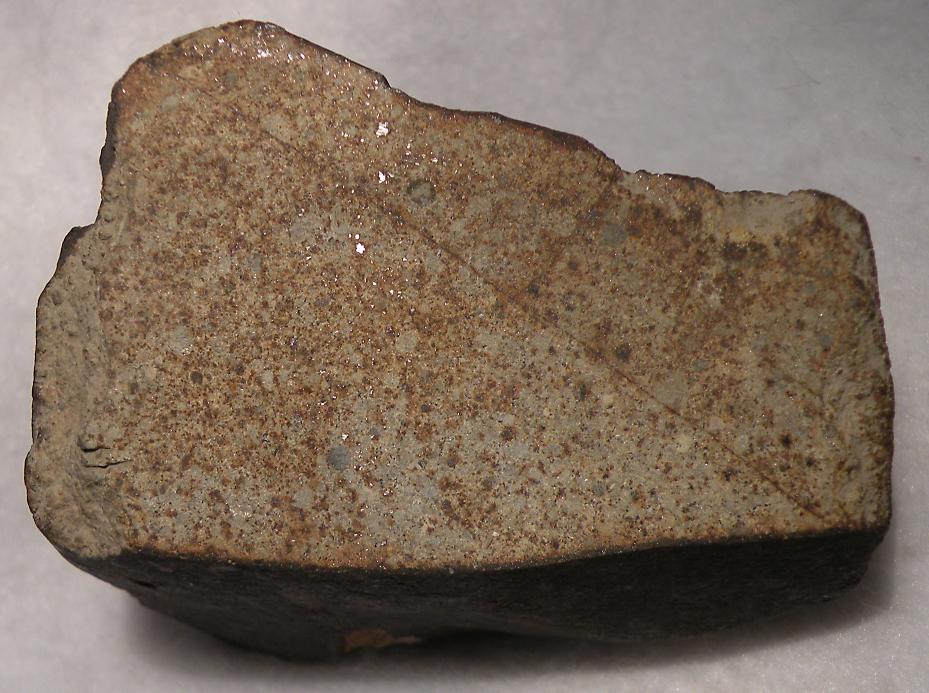 Well until next month have a great time with your collections and always look for that hidden something special in even the commonest looking meteorite.

The Meteorite Exchange, Inc. was born in 1996 with meteorite.com and Meteorite Times Magazine in 2002. Still enthusiastic about meteorites and all things related to them, we hunt, collect, cut and prepare specimens. We travel to gem shows and enjoy meteorites as much now as in the beginning. Please feel free to share any comments you have on this or any of our other sites.
PrevRon Hartman – 1935-2011
September 1997 Witnessed Fall: Worden, Michigan. A “Fender Bender” MeteoriteNext