I hope that this will not disappoint you, but we will not here debate just what they splatted on, but it was either against a cushion of speed-related compressed air or the earth’s surface. That they “splatted” is clear. These were once highly liquid blobs of glass shaped as classic teardrops that impacted, in this case, side-first. We found these in our first tektite shipment. 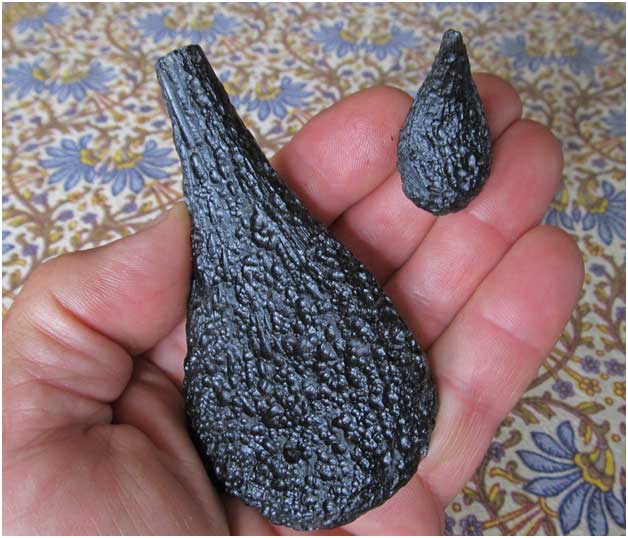 We have since examined over a million tektites. These remain the best of their type, without serious challengers.

This is a story about why these are some of the best side-splatted teardrop tektites known.

When we were first getting started with tektites over 20 years ago, they were merely interesting geological curiosities about which we knew very little. As we got into the tektite literature, we found a rich debate, full of questions and conundrums and paradoxes that has been puzzling serious scholars for over a hundred years. In a 1966 article, tektites were described as “…probably the most frustrating stones ever found on Earth.”

While theoretical aspects may be contentious, it is not for lack of knowledge of a descriptive character. Consider the remarkable geographic variations in the singular Australasian strewn field:

• At the distal region are the amazing Australites, with ablated flight forms, flanged buttons, cores, patellates and more, (and if we consider even more distal, there are microtektites of this age in Antarctic ice). Moving northwards, towards the still uncertain impact site, there are:
• Philippinites, with big bald spheroids to over a kilo, peculiar bread-crust soccer balls, ornate crescentic bikolites, and weirdly marked Andas that look as if chewed by a rodent,
• then over into Java, Borneo, Billiton, and Malaysia to the amazing enamel-glossed Agni Mani fire-pearls,
• then northwards into Thailand, Laos, and Vietnam, where ornate splashforms and splatforms fell in profusion. Strange blobs of tektite “foam” termed Muong Nongs are found intermixed throughout the SE Asian region, but reach their largest sizes in Laos.
• Finally, in the Guang Dong province of southern China, there (once upon a time) was an abundance of very large splashforms (and tonnes of small fragments). These are the Lei Gong Mo, “black ink-pens hurled from the sky by the god of thunder” over 800,000 years ago (and were the first tektite described in writing. This dates to the Tang Dynasty in 950 AD).

Our first big business purchase of tektites involved upwards of a quarter million pieces from the Khorat Plateau of NE Thailand. We were just getting interested in tektites, and the purchase opportunity was something of a fire-sale. We had to buy all or none from an importer that lost his lease on his warehouse and wanted to liquidate. We spent months cleaning and sorting and learning about the range of Thai tektite morphologies one by one. We found the two featured this month.

There follows a lot of history during which we sorted, one-by-one, through hundreds of thousands of tektites. Whenever opportunity presented itself, we upgraded our personal collection, but the original side-splatted teardrop Thailandites remain in our living-room cabinet, never having met their better. 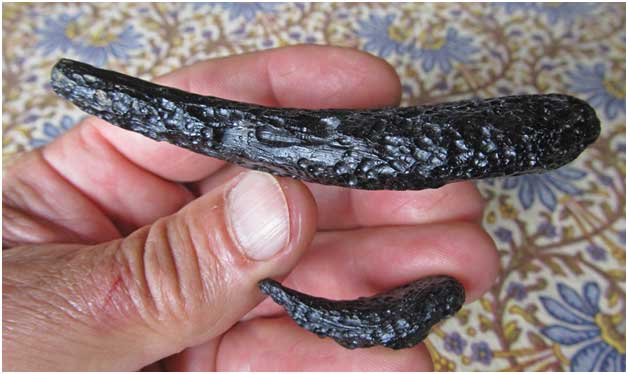 Why? Right place, right time. It doesn’t happen often, but it’s nice to catch the wave when it happens.

The level of our entry point into the tektite world was quite accidental. But without understanding, the first and greatest single tektite purchase of our history was sourced from the region containing the greatest morphological diversity of splashforms and splatforms in the Australasian strewnfield, most of which were unbroken complete individuals. We did not know we were looking at the best we might ever see, but we picked out the best that we did see from that lot and reserved it.

There is also an element of timing. During that period, there was a strong demand for tektites amongst the lapidary/gemstone factories of Thailand, so a lot of locals were supplementing their incomes with tektites. This opened the supply-side for the specimen trade, and tektites moved around the world in sea-container lots. At the big Tucson show, it was common for sellers to have big wooden crates of tektites. I remember buying in bulk at $12/kg!

(Now, the world supply seems largely exhausted. We have always tried to stock bulk tektites for teachers and nature shops and such like, but for the last two years, not a single dealer was offering such material. Our favorite Chinese supplier says that they are all gone. The source areas have been depleted.)

I have taken you on this long journey to provide perspective about the specimen quality of the two splatted teardrops featured in this article. They were part of the cream skimmed from the rich rivers of tektites that were flowing in the closing decades of the 1900s.

These splatted teardrops were the best of hundreds of thousands from the best region on earth for diverse splashforms, (and particularly, amazing splatforms). At the time when there were immense numbers from which one might select, we picked the very best. These are part of that select group.

Because of their former abundance where they were literally a bulk commodity sold by the kilo, the Australasian Indochinites are widely viewed as “common”, and not worthy of the attention of serious collectors of quality specimens.

There was a time that you could count on finding something better next year, which had the effect of dampening the use of superlatives like “the biggest” or “the best”. This changes in hindsight. When the race is over, you can start to objectively evaluate the runners.

That Indochinites were recovered by the tonne is not in doubt, and, indeed, the majority of that material may fairly be termed “common”. But this abundance also made possible extremes of quality. Would you prefer the best of 100 or the best of 100 million?

With hindsight that saw the boom and now, the clear decline, I can say, with a measure of authority, these side-splatted teardrops are worthy of your appreciation. They are amongst the best that will ever be found.

Common Indochinites? Yea. But these? Common? No, not these. 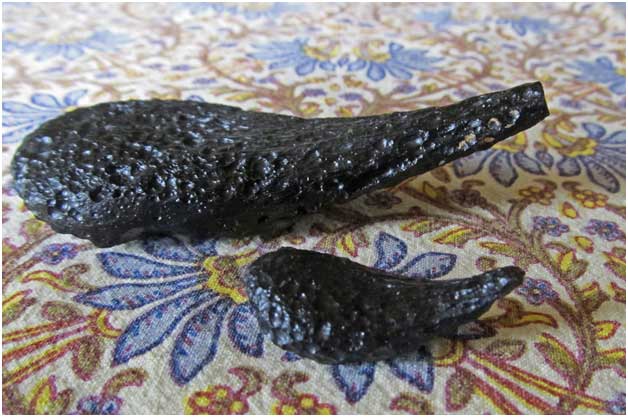 Norm Lehrman is a recently retired exploration geologist with over 45 years experience. His career involved fieldwork in over 35 countries on every continent except Antarctica. While stationed in Australia, Norm and his wife, Cookie, became interested in collecting Australites, which ultimately led to a generalized passion for tektites, impactites, meteorites and related materials. In 1999 they founded the Tektite Source business (www.TektiteSource.com) which has evolved into one of the world's premier providers of tektite and impactite specimens. Norm has retired to a ranch near Spokane, Washington, where they continue to serve tektite aficionados worldwide.
PrevThe Great Family Reunion Also Known As The Ensisheim Show
SaU 008 Martian shergottiteNext