Most years I write something about the meteorite aspect of the Tucson Gem and Mineral Show. And it is that time again. Paul Harris and I went to the show with different goals and at a different time frame. We drove this year since we had the time and it is now more convenient to drive since Paul moved from the Los Angeles area. I drove to his house past more snow than I have seen in Southern California in my lifetime. Since he moved, we no longer have our lunch meeting every other Tuesday. We had stored up some new stories to tell and had lots of business things to discuss on the ride to Tucson. Driving meant that we could bring back all the things we usually have to ship. I could get things that I needed for lapidary work and as many rocks as I wanted.

We had almost nothing on our list to buy for the business, and we went for the first three days the show was running. We had a lot of work to do even if we were not buying much. And I always have my eye out for something nice I may see for my collection. I took no list this year either. I had just one thing for sure I wanted if I saw it and that was a nice representative piece of Aiquile the Bolivian meteorite fall of November 20, 2016. As of this writing it has not received an official name or classification but was a huge event, and the meteorites are beautiful black treasures. I found a piece at the first dealer room we popped into. The price was reasonable too for such a fresh fall. It was a bubbly fusion crusted half stone. Five minutes into the show and my mental wish list is complete. I would find a few more meteorites before we left town. 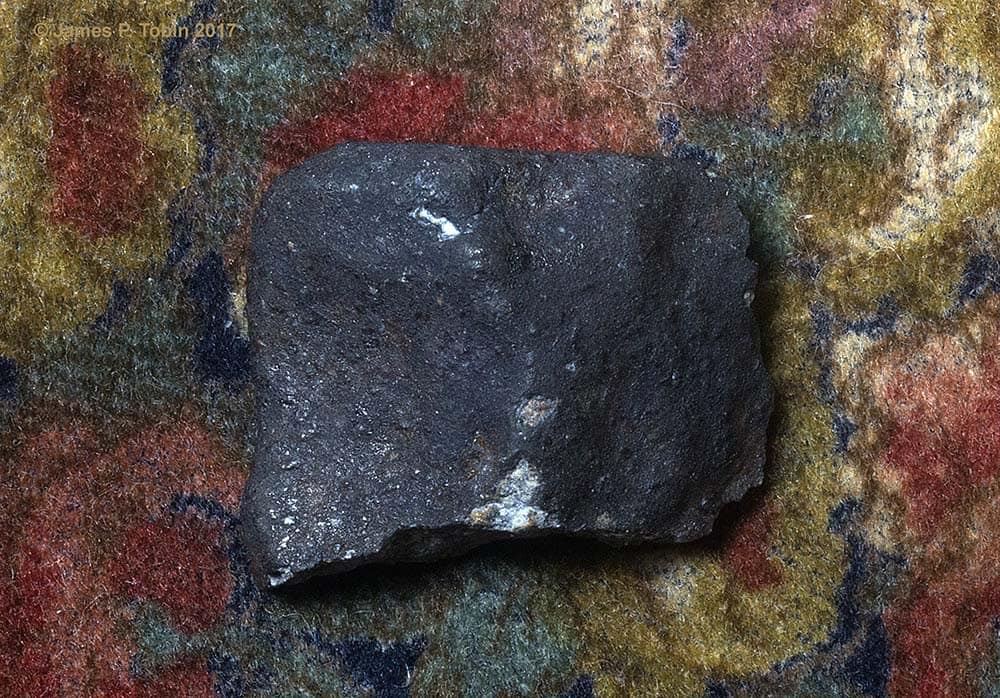 We made the rounds to the people we needed to see and did the work we had to do. We had arranged to buy a slice of Jonzac with the intent of breaking it into smaller pieces that were affordable but still nice size, not crumbs. That has been done now so here is a crass advertising plug. The Jonzac is listed in our catalog at https://www.meteorites-for-sale.com/jonzac-meteorite.html. I normally never promote in my article but Jonzac is such a historical meteorite, and it rarely shows up for sale, especially in pieces that do not kill the budget. 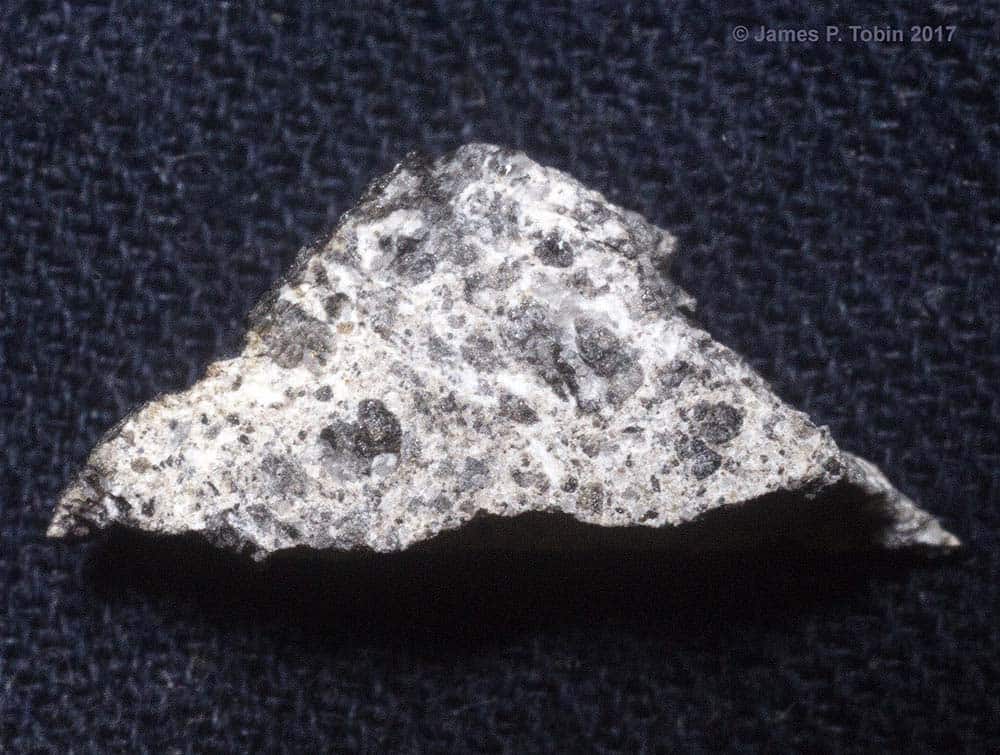 We ran into Al Lang and had a great visit with him over at the 22nd Street show. If you did not make it there this year be sure to stop in next year. Geoff Notkin’s Aerolite Meteorites is there as well. I found a few things at Al Lang’s booth. And the business got a few things too. He brought some meteorites he had been holding for 30 years, and some were real beauties. The business got some Vaca Muerta mesosiderite. I would have just a little work to do on those to freshen up the cut surfaces and polish them. We got some beautiful Nuevo Mercurio stones too. Many of these were oriented specimens. I cherry picked out a couple for myself of the Nuevo Mercurio and a 109-gram piece of Vaca Muerta. 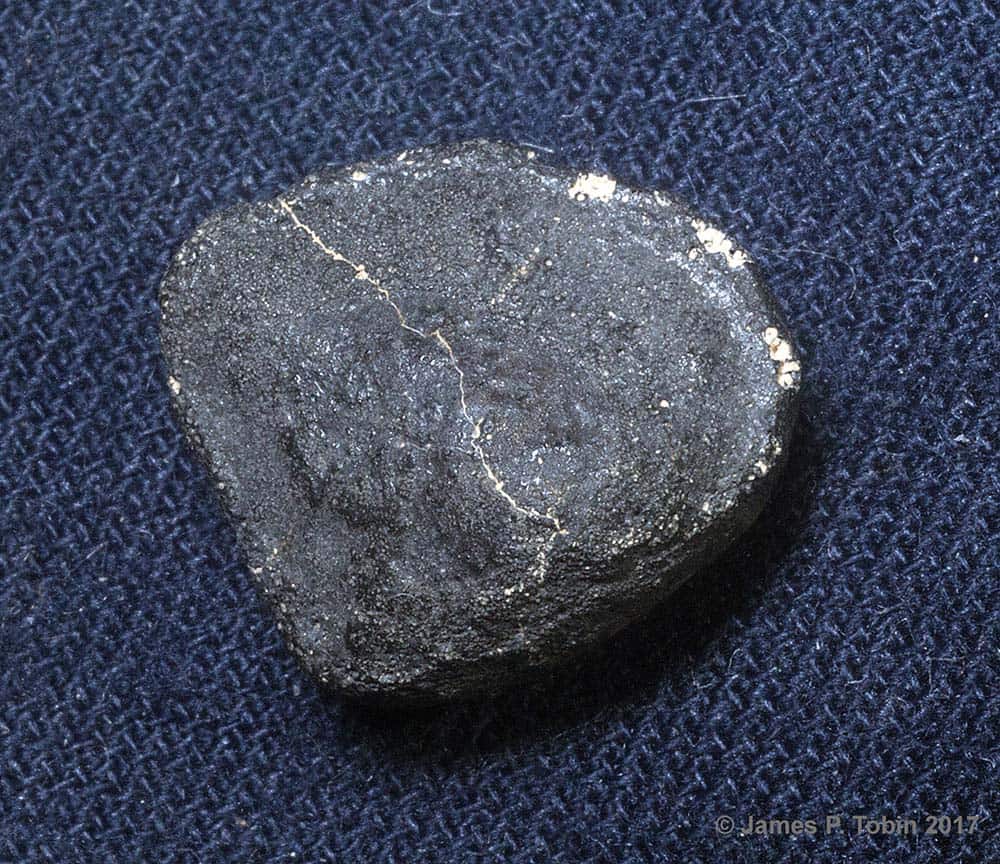 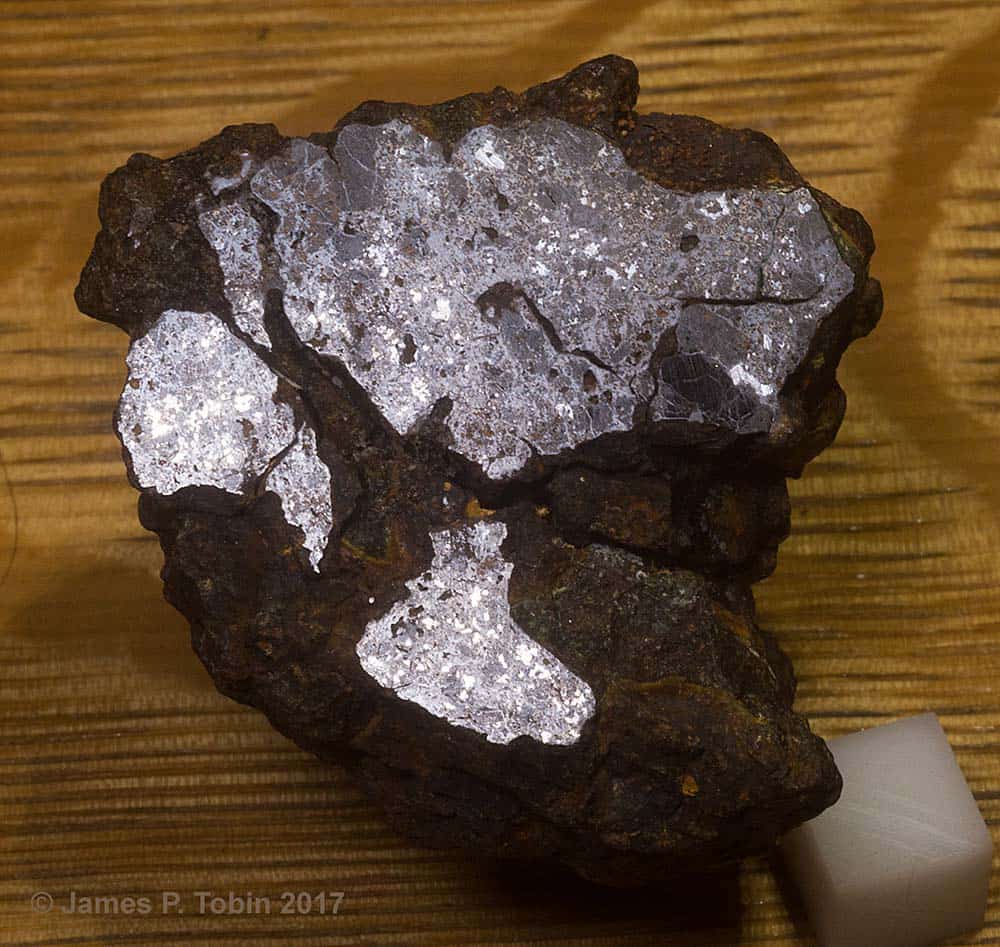 Beth Carrillo and Molly Phoenix were working the booth of Aerolite Meteorites, and we had a great chat with them. We would not run into Geoff this year which was unfortunate. But he is always busy working, and we have been most fortunate to have spent time with him the two previous shows. I found a slice of Clarendon (c) L4 from Texas. It is the largest chondrite found in Texas and Aerolite has some beautifully prepared slices. We would get back to 22nd Street just long enough a couple of days later to say goodbye before heading home.

As the show progressed, I could see a pattern emerging. I was buying mostly witnessed falls. The exceptions were an endpiece of Twannberg an IIG iron from Switzerland, a slice of Waltman L4, and a slice of Sandy Creek L5. Twannberg was around town in several rooms. I chose to buy it from Ann Black for just a little more per gram because each of her offerings was individually tested, certified, and numbered. The Twannberg meteorite is found in an area that has considerable other metal being detected out along with the meteorite. Since the piece I would buy was going to be small I wanted the assurance that it was an actual meteorite and not a rusted manmade fragment of metal. I do not usually worry about such things. I can tell a meteorite from a meteor-wrong pretty readily, but an iron meteorite from a rusted piece of iron of just 2-3 grams both with the same corrosion history maybe not. And my specimen had been beautifully cleaned and the cut face perfectly polished. As a hexahedrite, it was not going to have a pattern even if etched, so I was a little safer.

I also found some unclassified meteorites from my favorite dealer of that material. This year I got a very nice 1439 gram meteorite that was mostly fusion crusted. It has some exposed shock veins one exhibiting slickensides. It is not the freshest meteorite I have ever bought, but it is neat. There are also melted chondrules showing on the surface as blacker areas in the brown fusion crust. Some of these chondrules are 8-10 mm in diameter. I will likely never cut this meteorite though there is a broken surface where I could take off a clean-up slice. 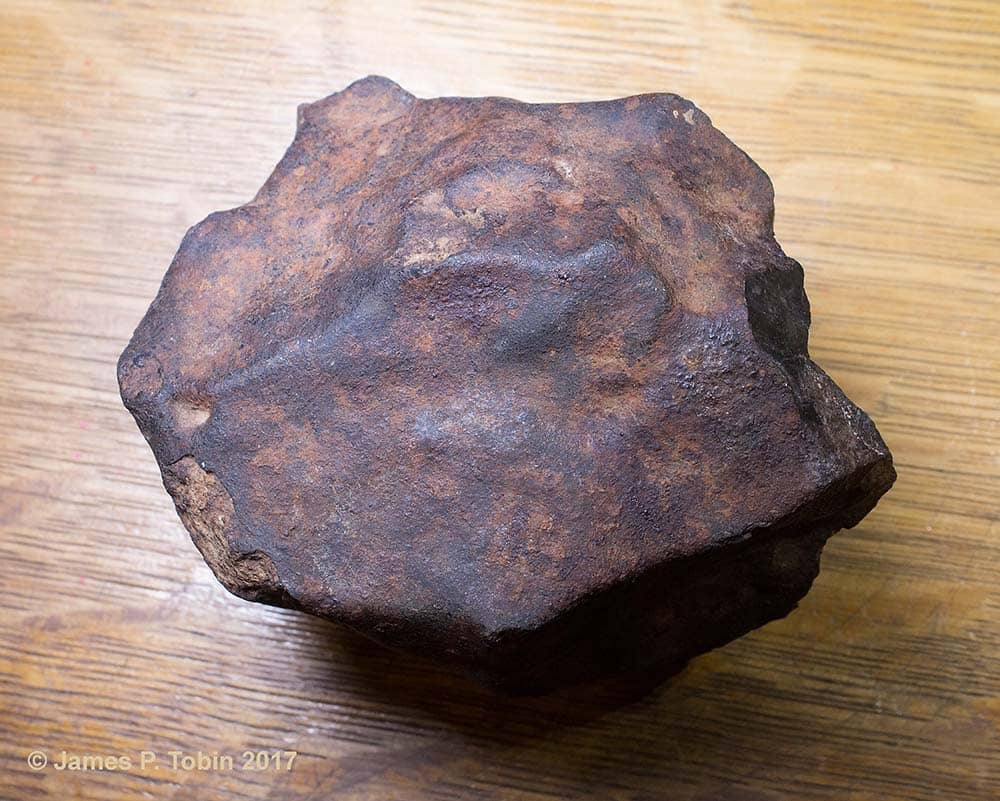 I also found a 338 gram unclassified that had old fusion crust on one side and a desert varnished surface everywhere else. There is a broken end on it too. I may slice it clean soon to see what treasures are inside. 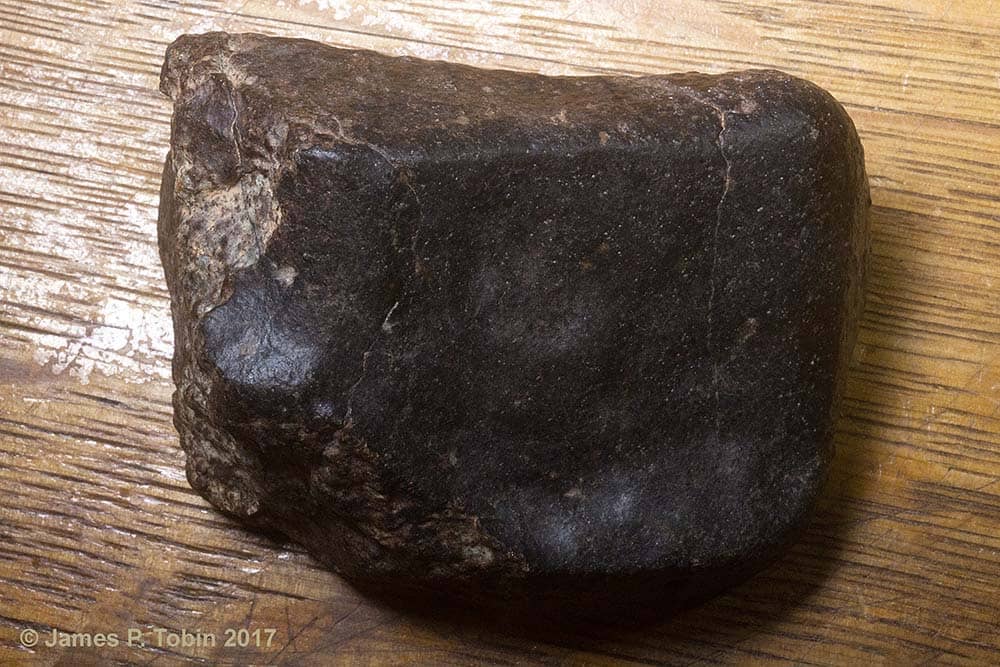 As for the falls I found, there was a 6-gram slice of New Orleans, a 6.3-gram slice of Tjerebon, a 2.55-gram slice of Pillistfer a fall that had been on my short list for some time. Bells is a C2-ung. Carbonaceous that fell on September 9th, 1961 with a very small amount recovered. Just around 375 grams at most in 7 stones was found. Since it is a C2 and very light my .028 gram fragment is visually a pretty nice size. That was one of those cases where there is not going to be anything bigger coming around so don’t bother waiting. 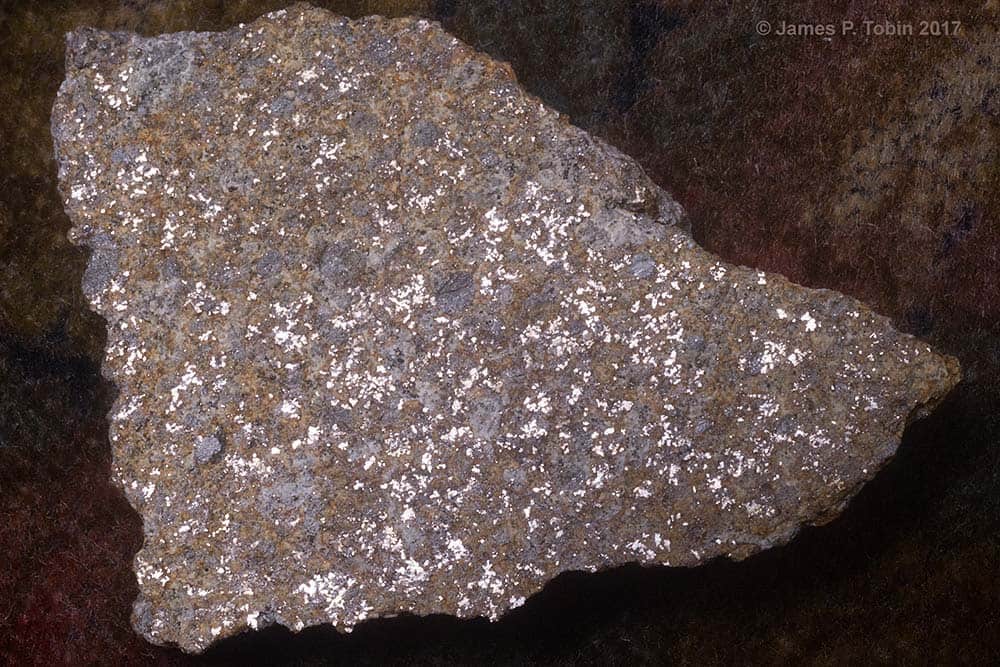 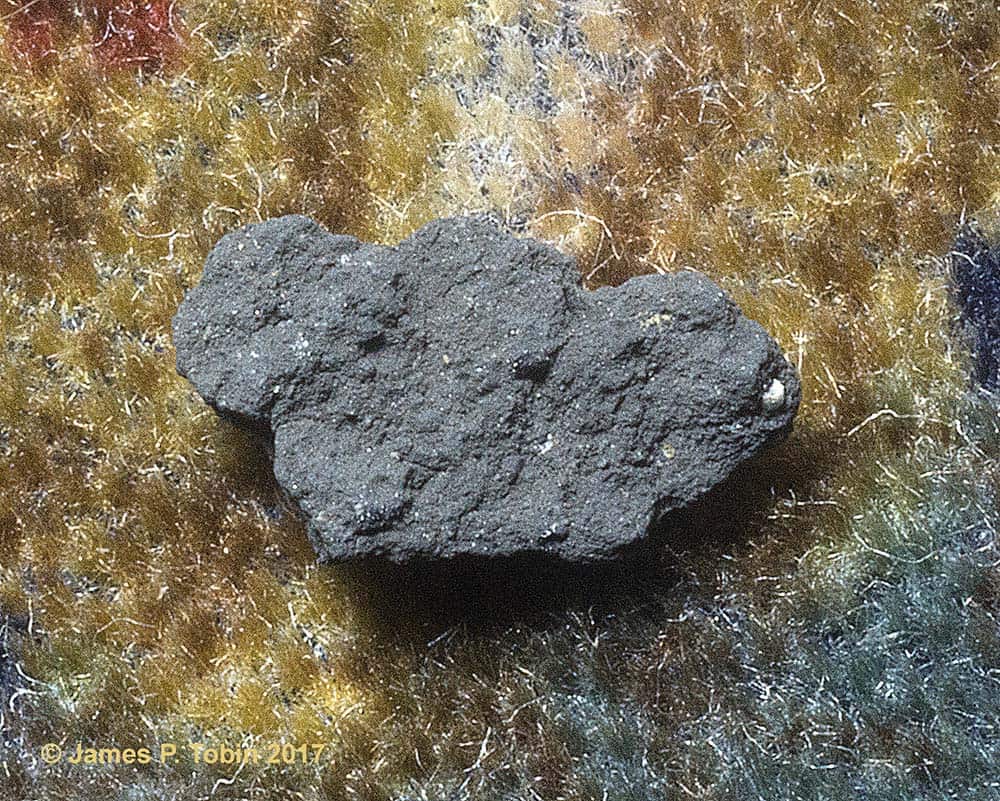 Still a sucker for Chelyabinsk I found a few pieces I could not pass up. The half stone is shown below with the remarkable bubbly fusion crust and flowing ridges of melted material. It really got my attention. It was in the lowest price tray too because it was broken I guess. But it a remarkable specimen to me, even incomplete. I got one other complete stone with fantastic shape, and a slice almost totally melt. It has a wonderful texture of light and dark gray melt surrounding small round and oval areas of chondritic material. 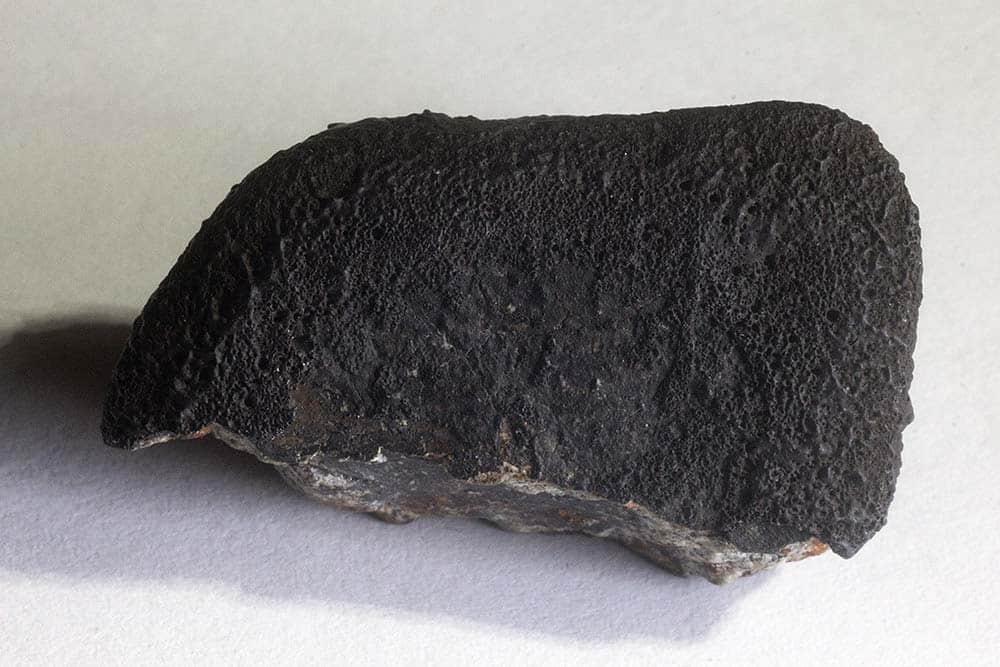 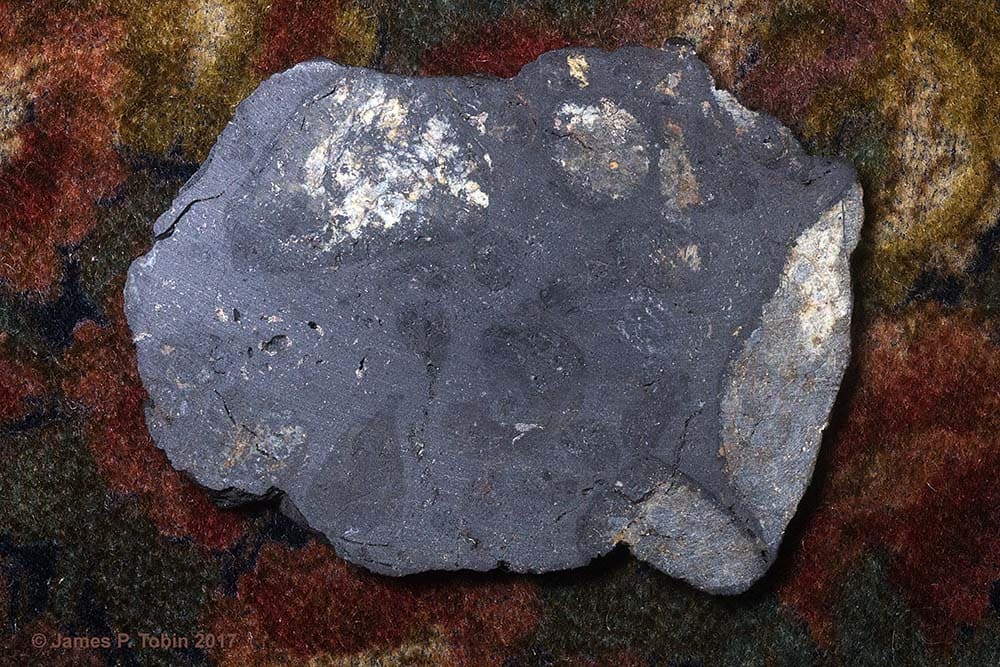 And the falls continued through the three days we were there. I found a piece of Creston the most recent fall in California that I was unable to go and hunt. But my specimen is a part of the Hammer Stone found by Rob Ward. It has no fusion crust, but it does have a nice big patch of slickensides. About an hour after finding the Creston I came upon a piece of Osceola in KD Meteorites’ suite. A big surprise, another very recent fall with low recovered weight. It was a part slice of .567 grams with fusion crust on half of the specimen. 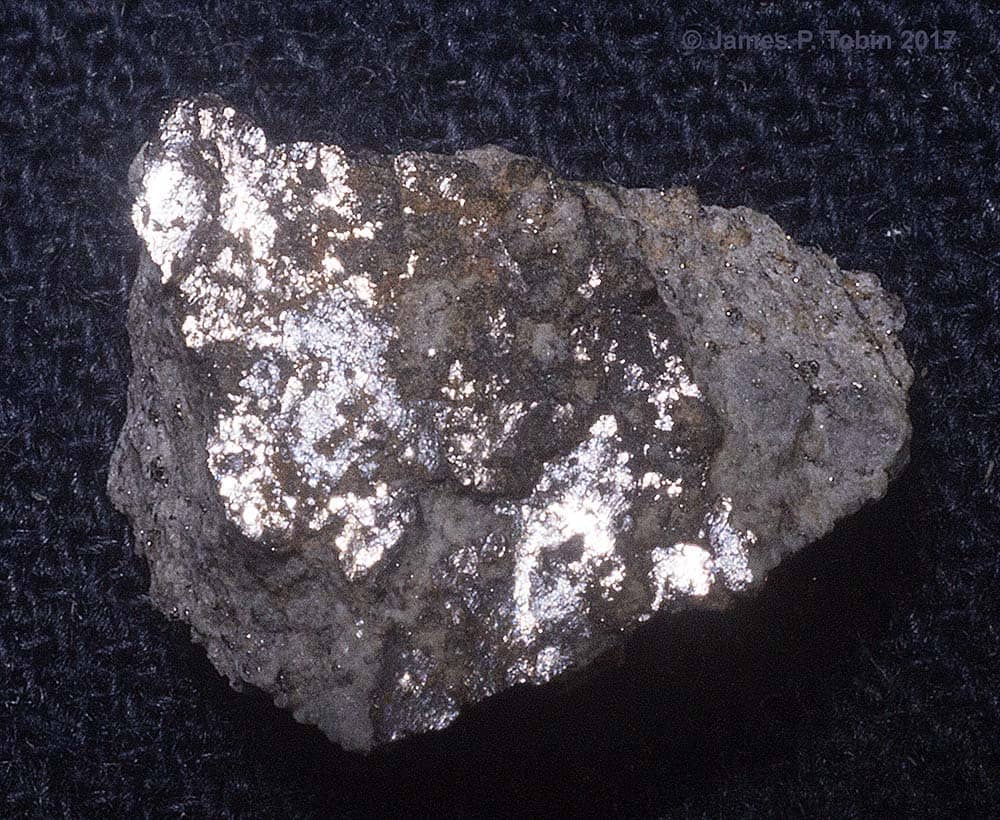 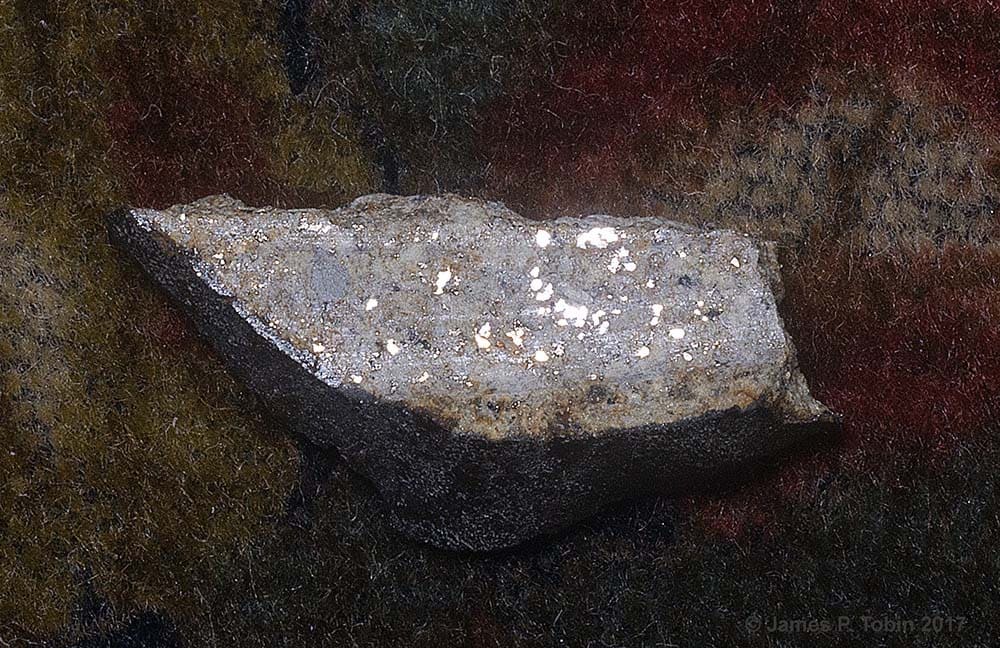 My collecting has slowed down over the last couple years. I have bought nearly nothing during the time between gem shows. Just three or four meteorites all the rest of the year. But I did find nice ones in Tucson this year.

I was given a few gift pieces too which was nice. I was admiring the natural round chalcedony spheres that Pani had in his room, and he graciously gave me three. I bought some neat, fresh unclassified meteorites that I will have so much fun with from him too. Always a great visit with him. Later on, a friend gave me a piece of something very historic and significant from Meteor Crater. It might not mean much to most other people, but I will treasure it. I found one more very bluish moldavite that stood out strongly in a tray of normals and bought it.

We headed home after three very busy days of both work and play. Going early was different and enjoyable. We did not see everyone but, we did after several years finally see some friends for dinner we had missed four years in a row. The snow was mostly gone at Paul’s house when we got back. I drove to LA the next morning, still a little tired but with some great new treasures to enjoy, photograph, cut and thin section. Good stuff to keep me busy and out of trouble for another year.

The Meteorite Exchange, Inc. was born in 1996 with meteorite.com and Meteorite Times Magazine in 2002. Still enthusiastic about meteorites and all things related to them, we hunt, collect, cut and prepare specimens. We travel to gem shows and enjoy meteorites as much now as in the beginning. Please feel free to share any comments you have on this or any of our other sites.
PrevMarsFest 2017
The Supuhee Meteorite: Assimilation and Transformation with IndigoNext