The Wonders of Tektite Skin Splits

As I prepared to write this article, it was my intention to flash through a series of tektite ornamentation images accompanied by minimal text. I made it all the way to the first photo before breaking my vows and changing my title. 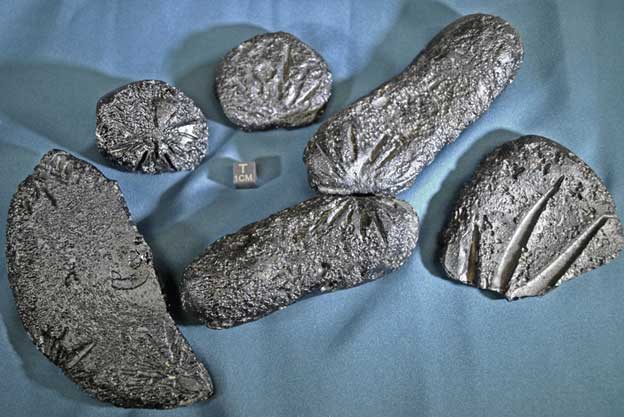 The ancient Chinese called these strange starburst patterns” Dragon Tracks”. They are thin-skinned collision features that formed at a time when the interior of each proto-tektite was still gooey and soft. A thin glassy skin, just barely brittle was easily shattered by any contact.

It was the pairing of the two bar-shaped tektites to the right of the scale cube in the first image that triggered this wordy tangent. The two stones are similar in size (212.0 and 182.5 gms, top and bottom in the photos) , morphology, and judging by the similarity in the starburst skin-splits, both were subject to similar collisions at a similar stage in their development. Until this photo was taken, I had never juxtaposed the pair guided by the matching impact features. The union is much greater than the parts! 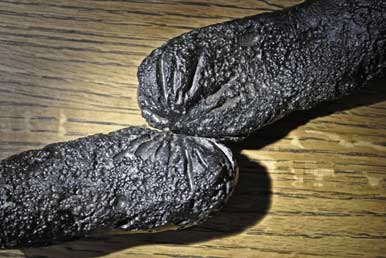 At the moment the halves slid into place, other elements of symmetry became clear. The impact surfaces are flattened across 50 to 75% the overall diameter of the rods. The ends of the examples are stiffly upturned at right angles to the impact surfaces (as if by impact of counter-clockwise-spinning rods). There is a slight bulbous distension in the 3-dimensional region encompassed by the starburst in each example.

The general pattern of deformation of the tektite provides clues regarding the physical state of the material at the time of formation. Based on the depth of the brittle skin splits, the skin sufficiently solid to sustain a brittle fracture was about 2mm thick. The starburst rays extend 25-30 mm from the impact surface. The rays cut sharply through upland surfaces that were already ornamented with the tiny cupule beading so common (and sometimes debated) in Indochinites. The overall stones exhibit quite plastic behavior, bending 50 mm diameter glass bars noticeably in what was likely a modest collision. 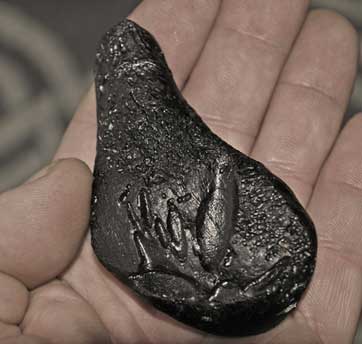 Starburst rays of varying size and character can form at any stage after a brittle skin develops that is sufficiently thick to transmit stresses and continuing until the skin was too thick or the interior too cold. It is common for larger specimens to show more than one starburst impact event. It seems that during the stage in the evolution of the parent fireball represented by these specimens, conditions were analogous to hailstones in a turbulent storm, with plenty of physical contact between tektites.

In the third image, I imagine something that started as a bulbous teardrop that was subsequently deformed into a golf-club shape by a basal collision. The entire stone, including its new starburst ray, was then subject to extreme flattening, which stretched and distorted the original skin splits. 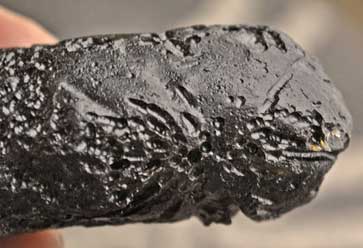 This stone in the fourth image has an interesting story to tell. A starburst ray is centered on the spherical pits, directed away from the observer. Downwards, skin-splits are well developed, (this is the bottom stone in the second image pairing) but in the upper part of the image the pattern is disrupted by a “bald spot”(an oft-cited mystery in tektite lore). The bald surface has several outwards-shallowing gutters, evidently remnants of deep skin splits. 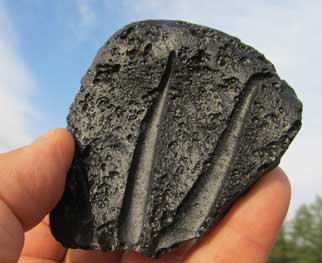 Not all skin-splits are starburst rays. This is our best “dragon track” ever. Loyal readers have seen this one before. Splatted very thin, it resembles a popped water-balloon. I don’t believe this feature is consistent with an end-on impact with another object. The skin was too thin to transmit such a split so far. It just splatted sideways till it split. Once again, notice the skin ornamentation between the splits. The textures you see were already there when a blob of molten glass flattened like a pancake in the wind and split, while yet very soft, under the toes of a dragon surfing out of the inferno on footpads of tektite glass.

Norm Lehrman is a recently retired exploration geologist with over 45 years experience. His career involved fieldwork in over 35 countries on every continent except Antarctica. While stationed in Australia, Norm and his wife, Cookie, became interested in collecting Australites, which ultimately led to a generalized passion for tektites, impactites, meteorites and related materials. In 1999 they founded the Tektite Source business (www.TektiteSource.com) which has evolved into one of the world's premier providers of tektite and impactite specimens. Norm has retired to a ranch near Spokane, Washington, where they continue to serve tektite aficionados worldwide.
PrevThe Rise of the Raj and the Fall of Shergotty – Conclusion
Allende CV3Next