The St-Robert meteorite fall
(As if you were there)

In Saint-Robert, a small village 15 km from Sorel-Tracy, as in all of southwestern Quebec, Canada, the evening of June 14, 1994, promises to be balmy and peaceful. The corn is already sown and the farmers are enjoying the good weather.

At 8:00 p.m., the weather station of St-Guillaume, located 20 km south-east of St-Robert, reports a clear sky with a few clouds and a temperature of 21° C.

At the same time, on television, begins Game 7 of the Stanley Cup Final between the New York Rangers and the Vancouver Canuks. Mr. Forcier’s cows graze in a field next to the farm located on Chemin de Saint-Thomas, where, Stéphane, the 21-year-old son of Mr. Forcier, is on his bicycle heading home.

At 8:00:13 p.m., the sun is low over the horizon in St-Robert. In space, 1500 km from St-Robert, an asteroid fragment of around 1600 kg is speeding at 13 km/s on a collision course with the Earth. Seen from there, the Earth is enormous, it occupies almost half of the sky; impossible to miss it. The meteoroid enjoys the last moments of tranquility in interplanetary space. For the moment, only a few rare particles come to tickle its surface; the loss of speed under these conditions is completely negligible.

At 8:01:44 p.m., 500 km from the Earth’s surface, the meteoroid passes over Peck Lake in New York State. From this height Lake Ontario can be seen clearly to the left and on the right, Boston is shining in the last rays of day light.

At 8:02:20 p.m., 100 km from the Earth’s surface, the meteoroid begins to feel the still light breath of the earth’s atmosphere. Saint Jean sur le Richelieu is almost immediately below and, on the left, the city of Montreal is now clearly visible. 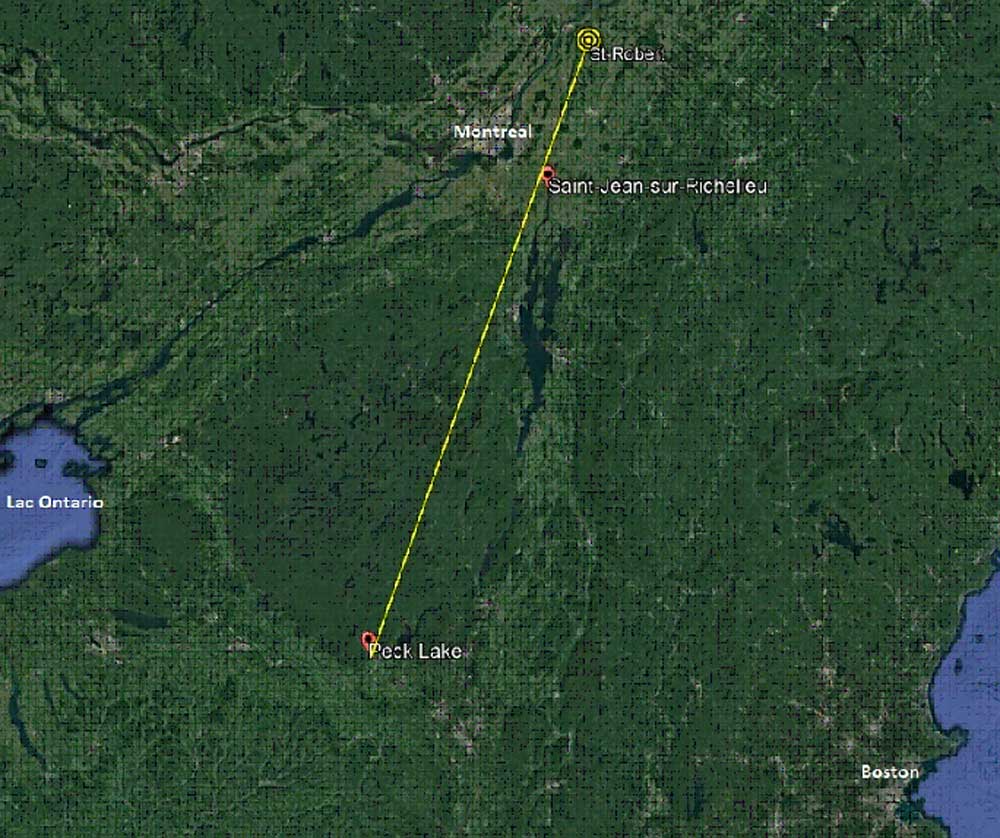 At 8:02:24 p.m., 62 km above the ground, the air is dense enough that the meteoroid, by compressing it, brings its temperature up to several thousand degrees Celsius. For tens of meters around it the over-heated atmosphere emits light, the glowing meteoroid sits in the center of a fireball. A meteor now appears in the sky and is visible for more than 500 km around. The intense heat melts the rock superficially and this liquid, hot and viscous, flows to the rear of the meteoroid where it forms a thick smoke as it cools. A whitish trace marks now the trajectory in the sky.

At 8:02:26 p.m., 38 km above the ground, the increasingly dense air starts to affect the meteoroid, which begins to break up. A few pieces are detached from the main body, but the meteoroid continues its course following the same heading of 202 °.

A fraction of a second later, the meteorid is now over Saint-Bernard-de-Michaudville (QC), 36 km above the ground. Here, with its speed now only 8 km / s, the deceleration, produced by the exponential increase in atmospheric density, is more than 20,000 times the acceleration of Earth’s gravity. The meteoroid is then under untenable stress and cannot help but explode. At this moment, the meteor shines brightly and reaches a stellar magnitude of -18. It then dissipates 50 GW in light energy, a power greater than that of Hydro-Québec during peak winter consumption. About 98% of the mass is pulverized, the rest being broken up into many pieces. 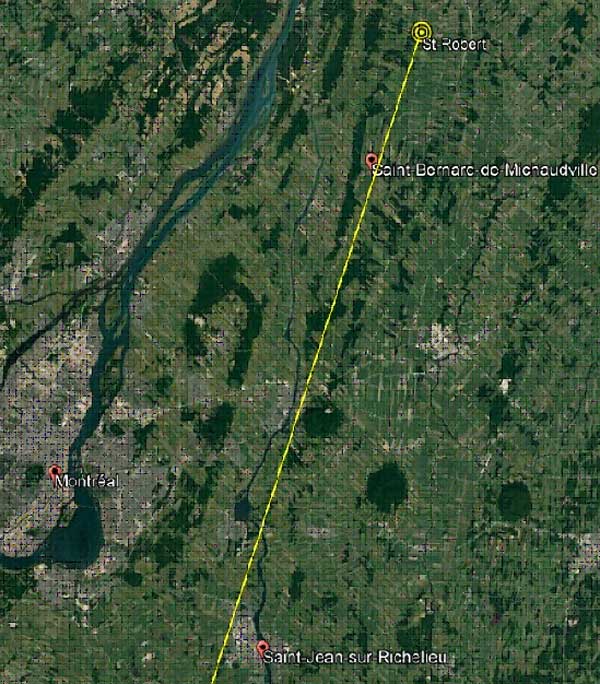 On the ground, thousands of people from Quebec, Ontario, New York State, New Hampshire, Vermont, watch this silent fireworks display. Danièle Jodoin from Montreal sees a big orange ball with a trail. She thinks it is fireworks, but is surprised by the size of the fireball and how it is going down instead of up. She thinks she is “going crazy”. She calls out to her husband Stéphane Hamel, who, with his back turned to the fireball, is surprised that the window in front of him is turning a fiery red.

At 8:02:30 p.m., 20 km above the ground, a small cloud of the surviving stones passes over No 576, chemin de Picoudi. The speed of the largest piece to have survived the ablation and explosion drops below 3 km / s. The energy released is no longer enough to ionize the surrounding air, the meteor is extinguished and the dark flight begins. As the meteoroid descends, it sinks into increasingly dense layers of the atmosphere; this produces a verticalization of the trajectory and a reduction in speed. The temperature drops below 1000 ° C, the molten surface freezes and a vitrified fusion crust appears. The angle of the fall, which started out at 58 ° downward is now about 78 °.

At 8:02:36 p.m., south of Saint-Robert, 10 km above Chemin de Picoudi Road, all the stones, even the largest, are now falling at a subsonic speed and begin to feel the high winds. The stones are then dispersed according to their mass and shape. The smaller ones stay behind, the heavier ones advance more easily towards the North-Northeast.

In Montreal, Mrs. Jodoin and her husband gaze in amazement at the “tube” of smoke in the sky. In Saint-Hyacinthe, in Saint-Amable, in Saint-Jean, all over southwestern Quebec, people are looking at the sky and trying to understand what is going on. What they see in the sky looks huge, but nothing is happening; life goes on as before. On Chemin de Saint-Thomas, the cows continue to graze and Stéphane Forcier on his bike has almost arrived home.

At the same time, Vital Lemay is working in his field 600 m southeast of downtown Saint-Robert. He hears two or three bangs and feels the ground shake. He looks at the sky and sees the cloud of smoke. He then hears two whistles, one to the south and the other to the north followed by a thud.

Stéphane Forcier, now in front of his farm, also feels the ground shaking and hears a whistle followed by a thud. He looks in the direction of the noise and sees some heifers running away and across a stream. He also sees a strange sight about 100 m from the house in the same direction, 4 cows formed a circle and are looking at the ground. Intrigued, Stéphane goes to see what it is about. He then discovers a hole 15 cm in diameter and 20 cm deep in the middle of the cows. There he recovers a blackened stone of 2.3 kg which is cold to the touch.

Over an area of 8 km by 3 km, a shower of stones is falling on the fields of Saint-Robert. 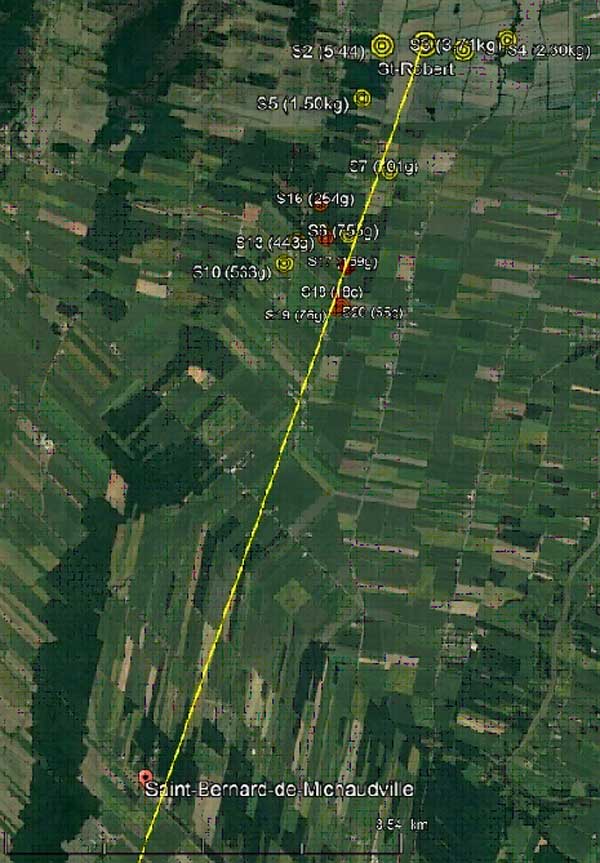 One or two minutes after the bolide has passed, thousands of people along the terrestrial trajectory of the meteoroid hear one or more detonations which startle them. Buildings and windows are shaking. Police departments in the region are inundated with calls from people reporting explosions of varying intensity and duration.

In Montreal, three to four minutes after the flash of light caused by the explosion, Ms. Jodoin and her partner hear a dull boom that seems to come from the ground.

The same night at Madison Garden, the New York Rangers win the Stanley Cup by 3 goals to 1, Bernard de Rome, on the 10 p.m. newscast, reports the probable fall of a meteorite in Saint Robert.

On June 15, 1994 at around 3 p.m., Richard Herd of the Geological Survey of Canada, who came expressly from Ottawa, recognizes that the stone picked up by Stéphane Forcier, following the indication of a few cows, is indeed a meteorite.

And thus, the cows of Saint-Robert made History. 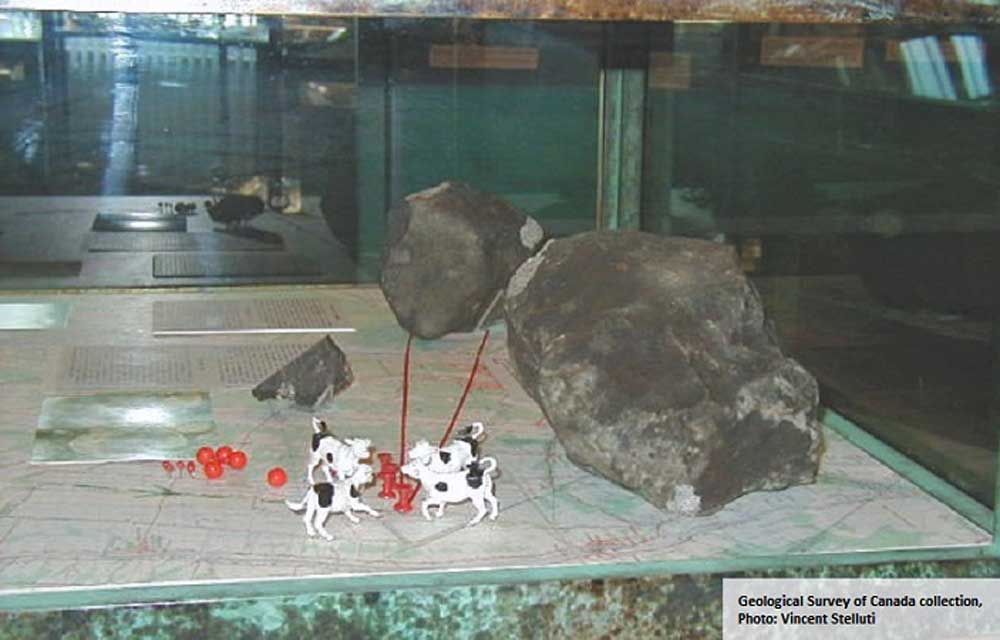 The data to reconstruct this fall was extracted from the publications given for reference. They come from ground observers, an infrasound detector and an electromagnetic wave detector installed on a NASA satellite. All this data is marred by uncertainties, but, for the reconstruction of the events and in order to simplify the reading of the text, only the average values and in agreement between them were taken into account. Thus, the positions have been rounded off to the kilometer and the times to the second.

This article was translated to English by Anne Black. 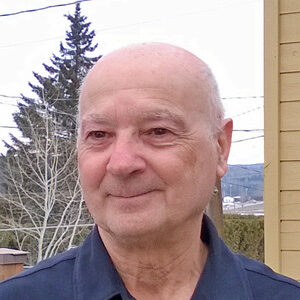 Vincent Stelluti studied physics at the University of Montreal and geology at the University of Quebec in Montreal. Now retired, he taught physics at the college level, first in Africa and then in Quebec. He became interested in meteorites by reading the book "Le Fer de Dieu" by Théodore Monod and Brigitte Zanda.
PrevGold Basin L4 Meteorite
Initial Sample Return Analysis from Asteroid RyuguNext