The Noblesville Meteorite: A Cosmic Contrast of Young and Old

Three-point-five-six meters is a pretty precise distance given cosmic measures yet it is the exact distance by which a half-kilo of space rock missed hitting pair of young boys in Noblesville, Indiana back in 1991. 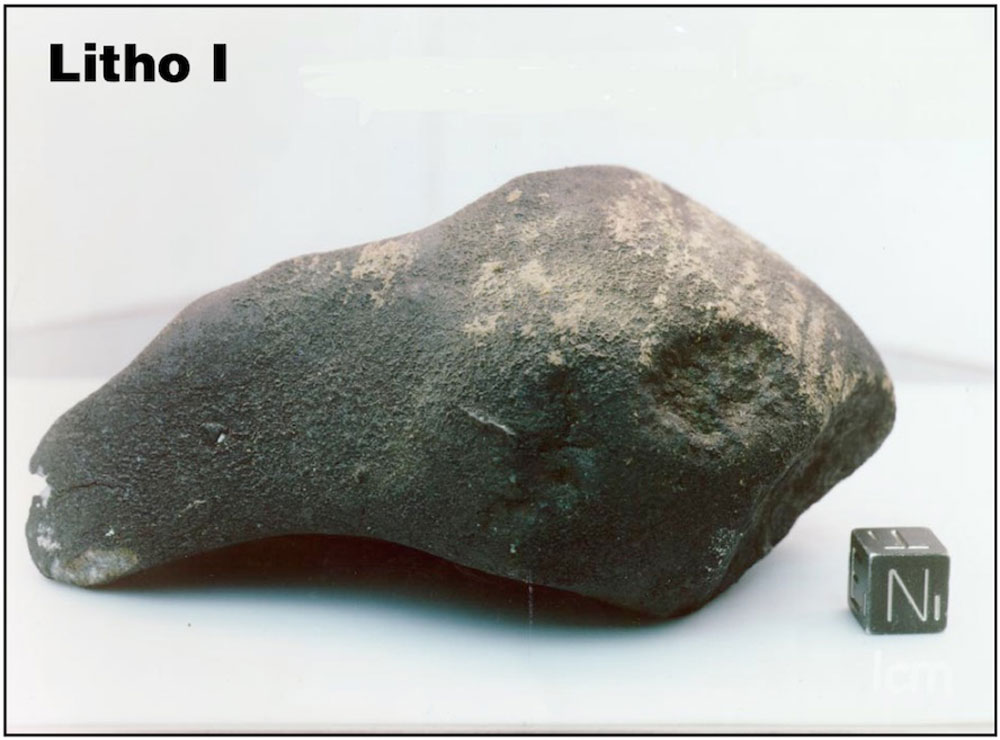 On the last day of August, Brodie Spaulding and Brian Kenzie were standing on the Spaulding lawn when a rock whirred passed them and hit the ground. Literally, it whirred. No other pomp and circumstance. Just whirr…thud. The boys described the stone as warm. 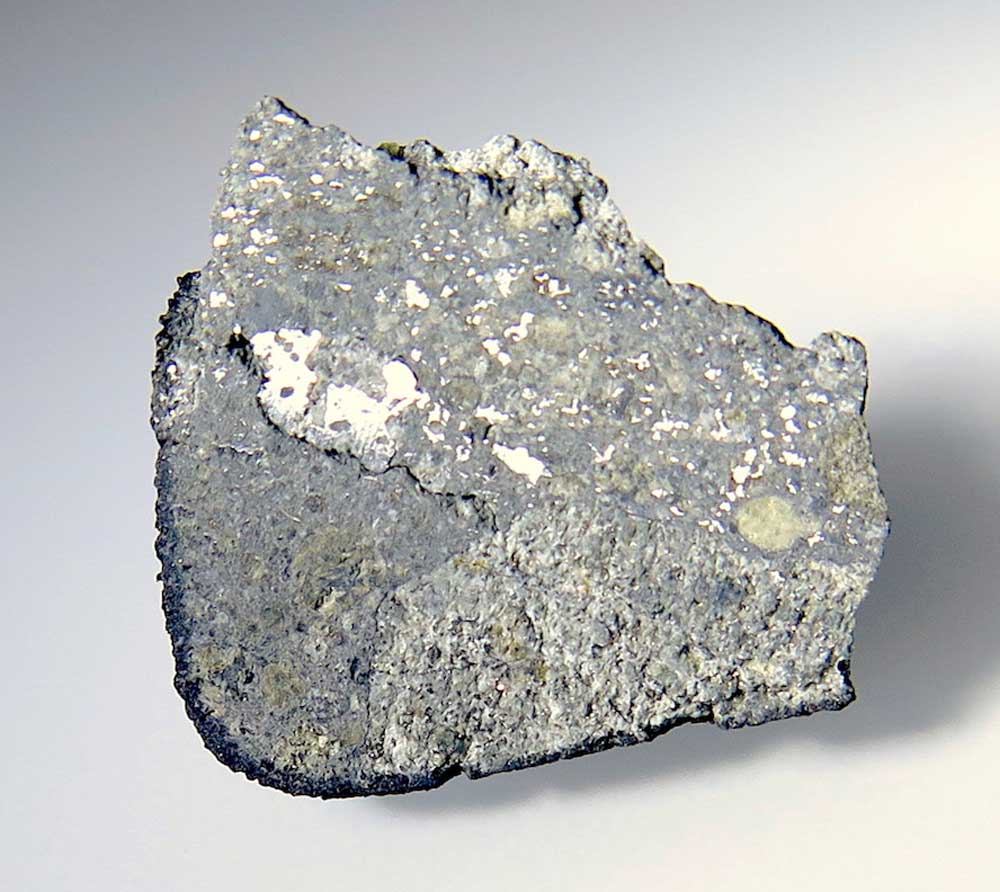 According to reports, a quick scan of the neighborhood by the boys produced no likely suspects who could have thrown the rock at them. Then apparently some stuff happened (the story jumps ahead) and taa-daa, a scientist at Purdue University confirmed that the 483.7g stone was actually an ordinary chondrite. But like many things meteorite, Ordinary does not mean ordinary. 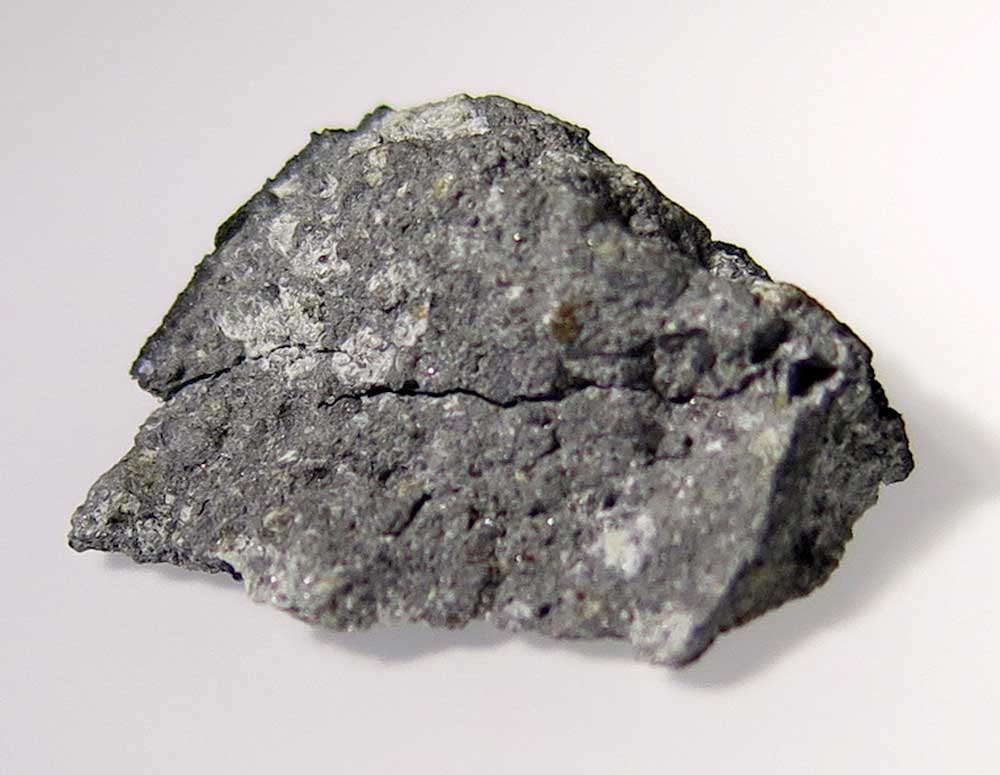 The Noblesville meteorite, as it has been named, is an “ordinary” H4-6 chondrite. However, according to the Purdue News (September 17, 1993), Noblesville is far from ordinary. For example, it appears that the piece of space rock that narrowly missed hitting the teenagers broke off its parent asteroid about 45 million years ago. For those not well versed in the significance of such a number, let just say that that’s a very long time for a small homeless fragment of rock to survive on it’s own in space. To put that in perspective, 97% of H chondrites are younger than Noblesville. 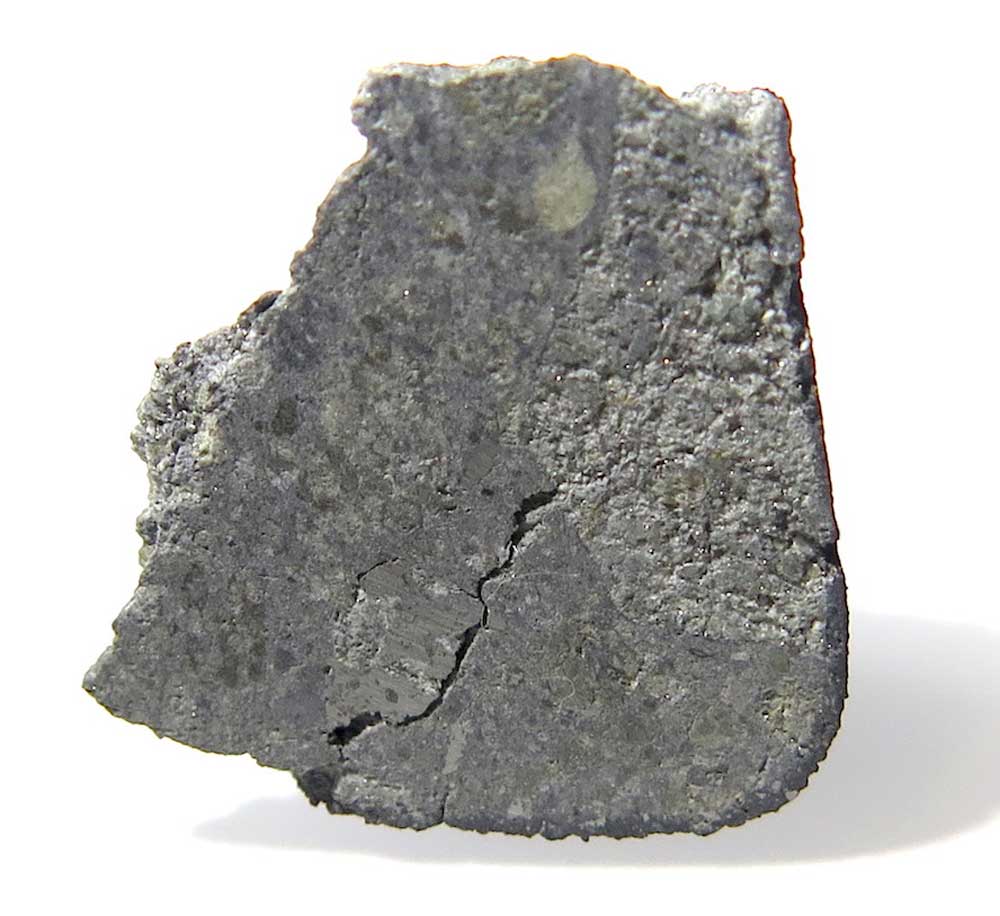 The Noblesville chondrite also shows unusually low levels of radiation damage likely due to a close pass with the sun. According to chemistry professor Michael Lipschutz, in some ways, the heating near the sun can cause, or “bake out” as Lipschutz says, the fired atoms thus returning them to a pre-radiation-damaged state. Adding further refreshness to this space cooked stone, it was retrieved within seconds after arriving on earth.

Into the Public Sector

After initial study at Purdue, the half-kilo Noblesville stone was returned to Brodie who kept it for years until the financial realities of college necessitated the sale of the oriented space rock. It was following that sale that I was able to get a sample for my collection. 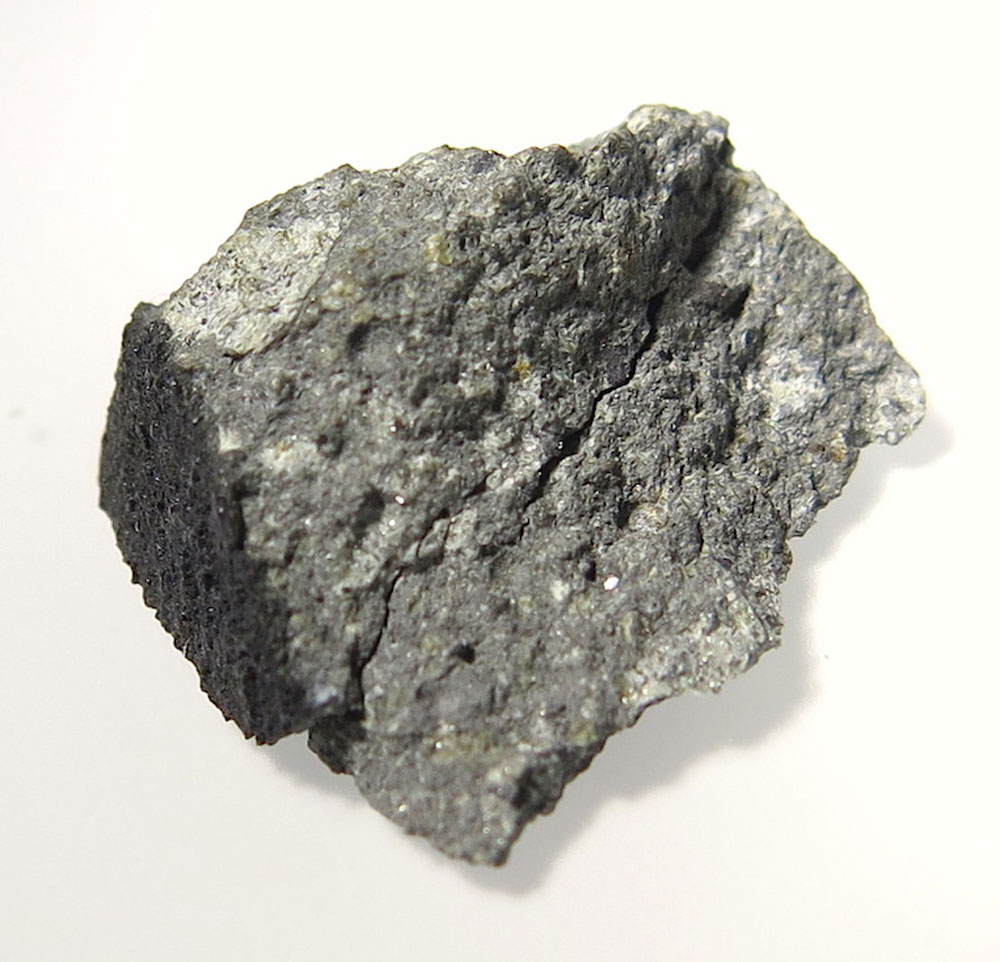 Noblesville is a visually active meteorite. The light grey brecciated interior is filled with metal and contrasts strongly with the jet-black fusion crust. Distinct round chondrules are present but uncommon with a majority of the matrix in my specimen appearing on the upper end of the metamorphic scale. 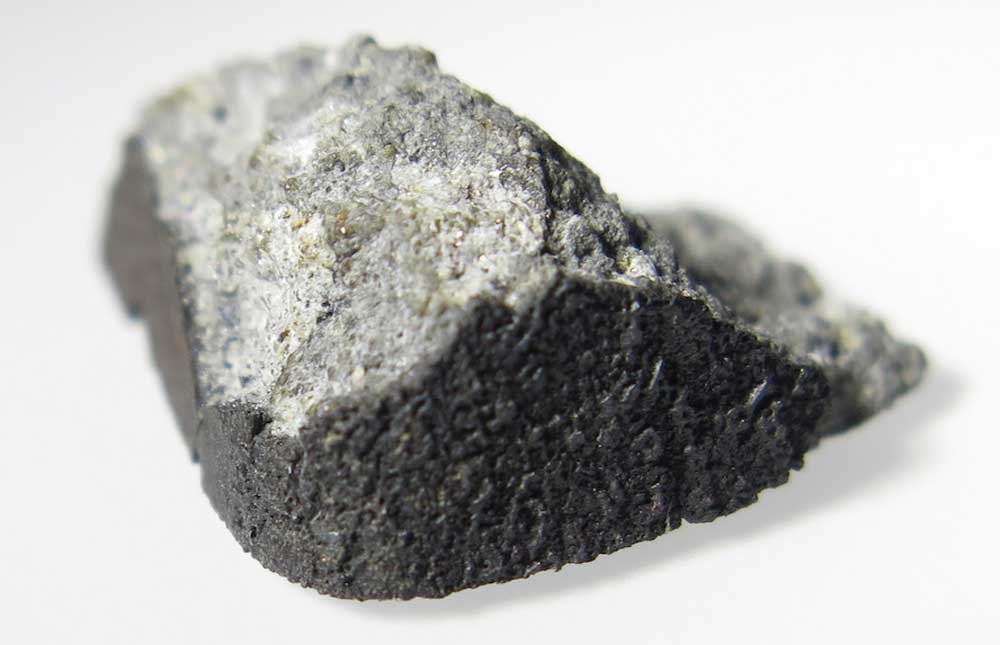 Since Noblesville a reasonably oriented specimen, flow lines are obvious in the crust with their glassy ripples running parallel to each other. The metal flake is fairly uniform in distribution, but varies wildly in its size from pinpoints to blebs to larger swaths of metal. The matrix appears somewhat friable with trace pockets from missing spherical chondrules somewhat like the crumbly L4 meteorite named Saratov. 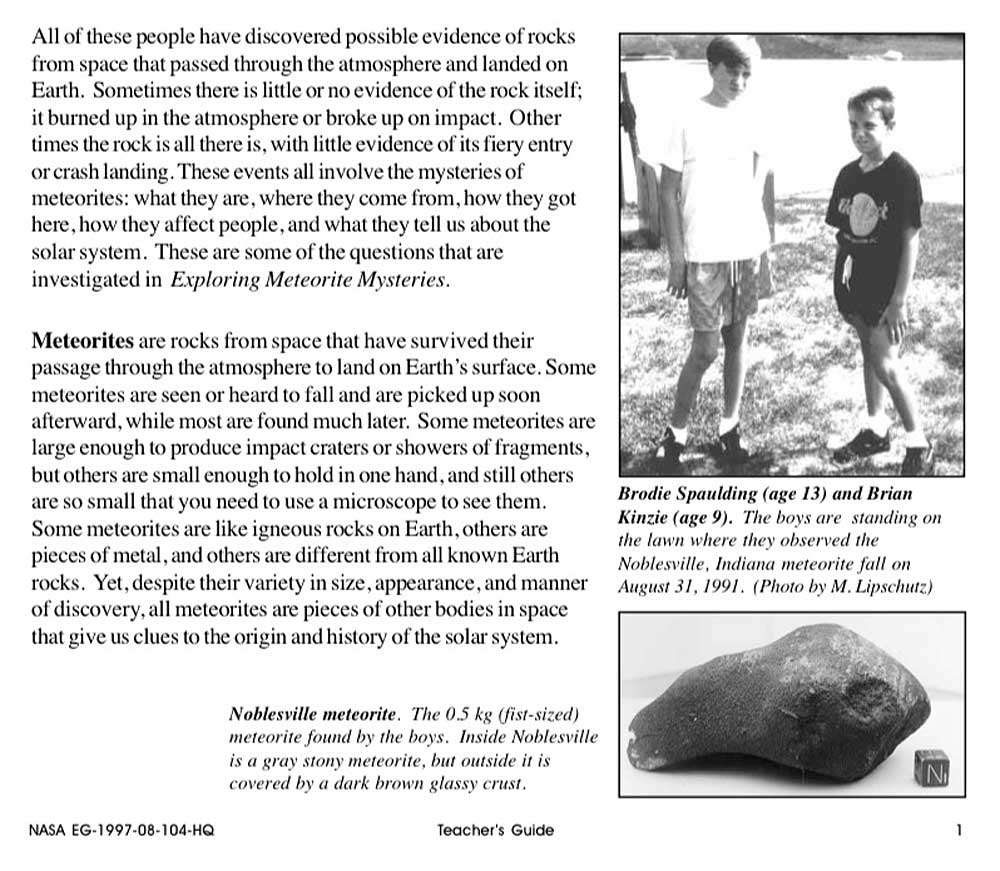 Noblesville has another claim to fame. It was highlighted in the NASA educational publication titled Exploring Meteorite Mysteries: A Teacher’s Guide with Activities for Earth and Space Sciences. This August 1997 NASA educational product (available for free here: EG-1997-08-104-HQ) was groundbreaking when it was first published. It contained 19 lessons including one about the Nobelsville Fall, and a pictures of the stone and the boys on page 1 of the curriculum. The publication also includes a color lithograph of the intact Noblesville stone in all its elongated glory (pictured at the beginning of this article). 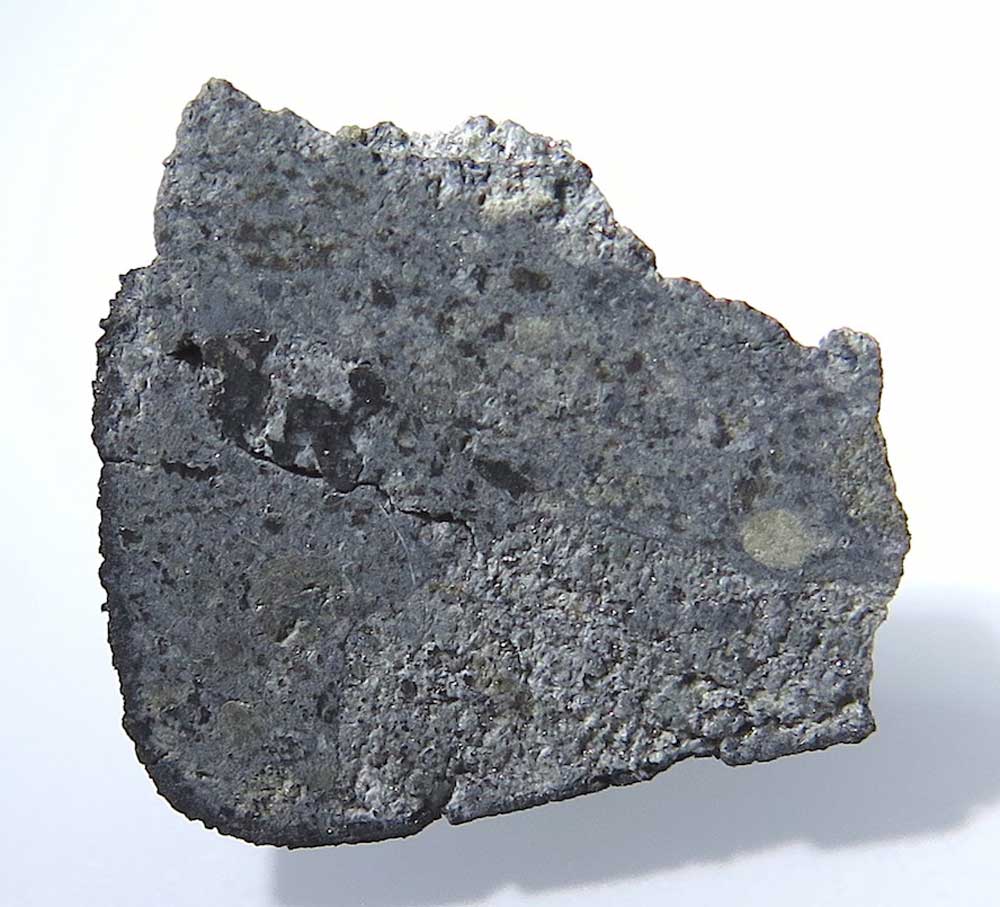 It’s hard to believe that the Nobelsville chondrite fell over 30 years ago. That means Brodie is now 43 and his at-the-time nine year old friend Brian Kinzie is now around 40 years old. I wonder if Brodie and Brian still talk about the amazing and astronomically rare event they witnessed? I sure hope so.

Dr. Martin Horejsi is a Professor of Instructional Technology and Science Education at The University of Montana, Missoula. A long-time meteorite collector and writer, before publishing his column "The Accretion Desk" in The Meteorite Times, he contributed often and wrote the column "From The Strewnfields" in Meteorite Magazine. Horejsi is also the Lead Technology Reviewer for The National Science Teaching Association, and just celebrated his 22th year working with NASA and the JPL in education and public outreach (EPO), and is a NASA Solar System Ambassador. Horejsi specializes in the collection and study of historic witnessed fall meteorites with the older, smaller, and rarer the better. Although his meteorite collection once numbered over a thousand pieces with near that many different locations, several large trades and sales and trades have streamlined the collection to about 250 important locations with all but 10 being witnessed falls. Many of the significant specimens in Horejsi's collection are historic witnessed falls that once occupied prominence in the meteorite collections of Robert A. Haag, James Schwade, and Michael Farmer. Other important specimens were acquired through institutional trades including those from The Smithsonian Institution, Arizona State University, and other universities. Horejsi was awarded the Harvey (Nininger) Award in Tucson in 2006, The Brotherhood of Guardians of the Ensisheim Meteorite in 2011, a JPL Inspiration Person, on the JPL STARDUST Team that was awarded the Smithsonian Air and Space Museum Annual Trophy in 2008, and former board member of the International Meteorite Collectors Association, and the Northwest Council for Computers in Education.
PrevThe 2018 Tucson Gem and Mineral Show
Vaca Muerta Mesosiderite A-1Next