The Flandrau – Science Center & Planetarium
For the meteorite aficionado this is a must-see destination while attending the Tucson Gem & Mineral Show.

The Tucson Gem and Mineral Show has become a “mecca” for those of us with any interest in meteorites. The yearly “pilgrimage” to this desert city-turned-spacerock-convention is often described in near-religious-tones by visiting meteorite aficionado as being a life-changing event. Hyperbole aside, there is no better place than Tucson in early February to see up-close the newest and argueably rarest meteorite finds. And for sure, it is the greatest, temporary concentration of ordinary chondrites and other common meteorites. Although there are many meteorites on display, they are widely scattered all over town. Their venues are typically in meteorite dealers “showrooms”, which in most cases, are just a few display cases that are set up in the dealer’s motel room! Although these dealer displays are small and widespread throughout Tucson, the meteorite collectors are very adept at finding them.

Because hunting down all of these widely scattered meteorite dealers is so time-consuming, visitors to the Tucson Show find it hard to make time to visit the local museums and planetariums to view their meteorite displays. These displays are usually perceived as being permanent (as in, “not going anywhere soon”) but that could be a misconception, because I have found that most of these displays are not static. Each year that I return, I find that there have been a number of changes to these “permanent” displays.

From the title of this article you can tell that I will be focusing on the meteorite displays that are open to public viewing at the Flandrau Science Center.
What was originally called, “The Flandrau Planetarium”, has expanded over the years into a large circular, temple-looking building that now houses, not only the Flandrau Planetarium, but the Flandrau Observatory, the UA Mineral Museum, and the Science Center, comprising a Gift Shop and several exhibits both permanent and temporary. This building (located on the University of Arizona campus ) is now known as the “UA Science Center – Flandrau”. This building with its white domes is situated next door to the Kuiper Building, which is home to the Lunar & Planetary Lab (LPL). The LPL, a world-famous research facility, was the site of the 2010 Arizona Meteorite Exhibit.

Another commonly used name for the Flandrau Planetarium is, “UA Science: Flandrau”.
UA Science: Flandrau had its beginnings in 1972 through a donation from the estate of Grace H. Flandrau, a well-known author and frequent visitor to Tucson. The University decided to use the donation to fund a planetarium, a facility that would increase public appreciation and understanding of science.

Originally, this “facility” was part of the UA Department of Astronomy, and at that time was known as The Grace H. Flandrau Planetarium. And at that time its location on campus was near the Astronomy Department, Optical Sciences Center, Lunar and Planetary Laboratory, as well as, the historic Steward Observatory. This was intentional in order to reflect the Flandrau’s continuing connections to the research community.

The Planetarium was opened to the public in 1975. And O. Richard Norton was its first Planetarium director.

For those who haven’t been to The Flandrau recently, you may be surprised by all of the renovations since the Flandrau Planetarium re-opened in April of 2010 . If you have visited the “The Flandrau” in the past, you should visit it again and see the renovations for yourself. And if you haven’t seen “The Flandrau”, I highly recommend that you take the time on your next visit to Tucson to partake in an out-of-this-world experience.

You can find a “MAP TO Flandrau Science Center” by going to the Arizona Guide website. 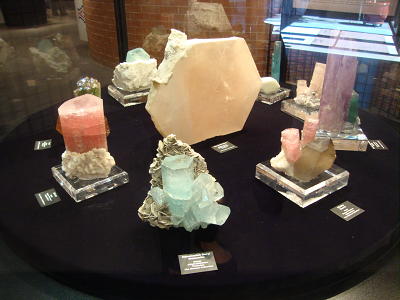 What was originally called, “The Flandrau Planetarium”, is now the center-piece to what has grown into a multifunctional temple to science, The UA Science Center – Flandrau.

Link to a website for the :
UA Science Center University of Arizona, Tucson

A website for links to images of other observatories in Arizona and California:
http://www.xanaduobservatory.com/

Get information about upcoming events at the UA Science: Flandrau on Twitter.


My previous articles can be found *HERE*

Bob is a retired aerospace engineer living in Southern California, and has been recovering meteorites from the Southwest U.S. Deserts since 1995.
PrevIMCA Insights – February 2011
Tucson Show 2011 RecapNext