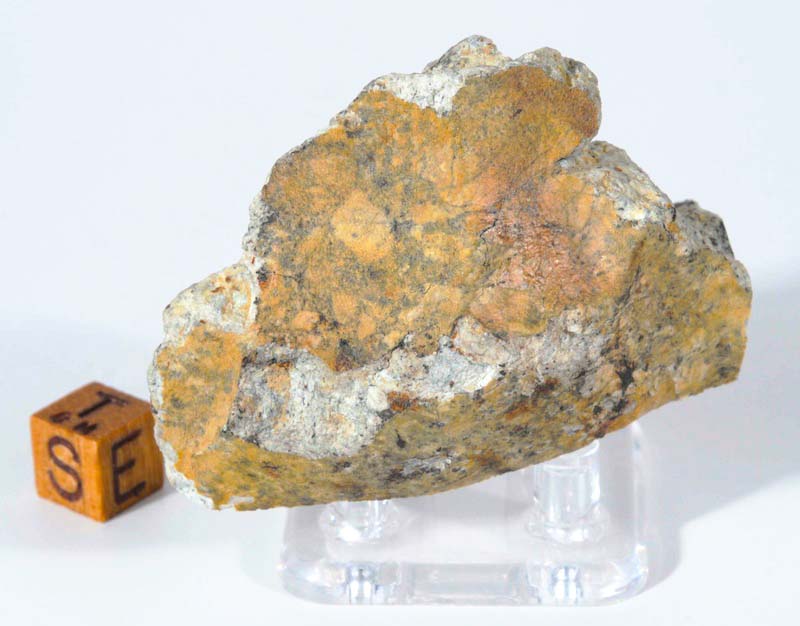 The Domesday Book written in the year 1086 contains the results of a great survey of much of England and Wales. It was created for William the Conqueror and according to Wikipedia, “One of the main purposes of the survey was to determine who held what and what taxes had been liable under Edward the Confessor; the judgment of the Domesday assessors was final—whatever the book said about who held the material wealth or what it was worth, was the law, and there was no appeal.”

Nine hundred and twenty years later a well-crusted fragment of the witnessed meteorite fall named Cumberland Falls landed in my collection replacing a small sample that had been the placeholder for over a decade. The Cumberland Falls meteorite is a fascinating study in itself. 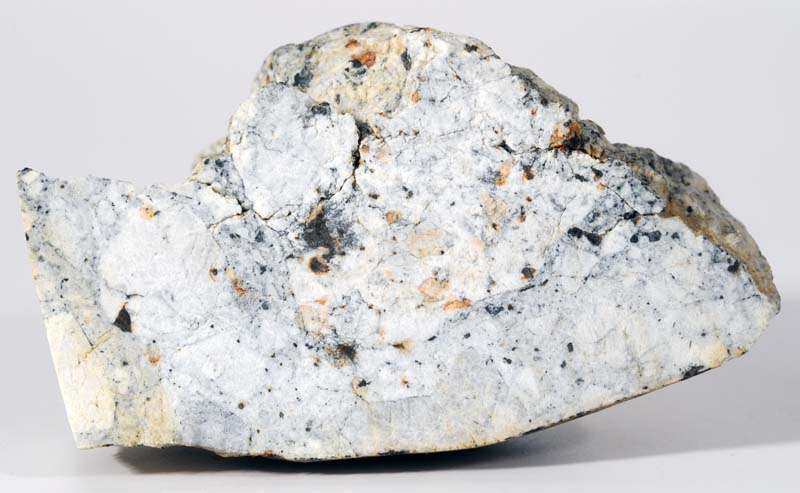 Cumberland, the name chose by Walker was in vogue in America, and according to Walker’s diary entry for April 17, 1750, “I went down the creek a-hunting, and found that it went into a river about a mile below our camp. This, which is Flat Creek and some other join’d, I called Cumberland River.” 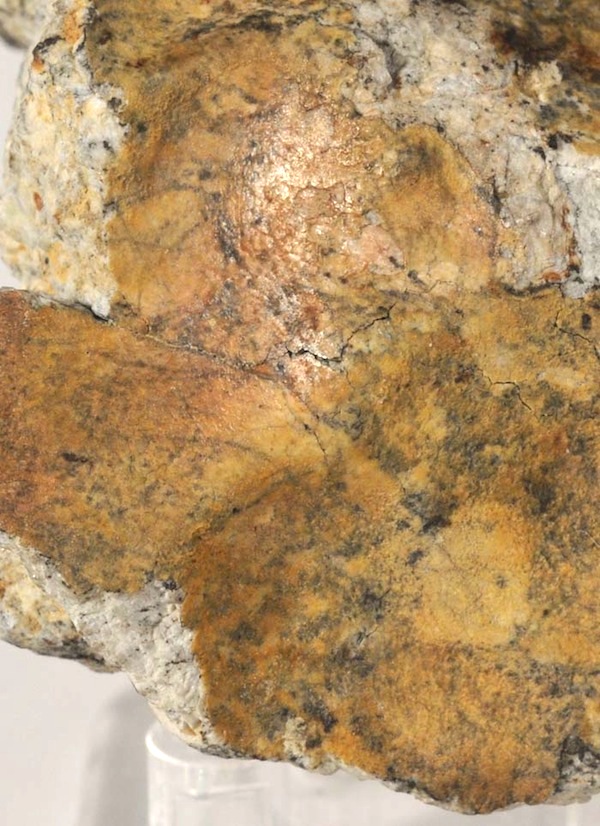 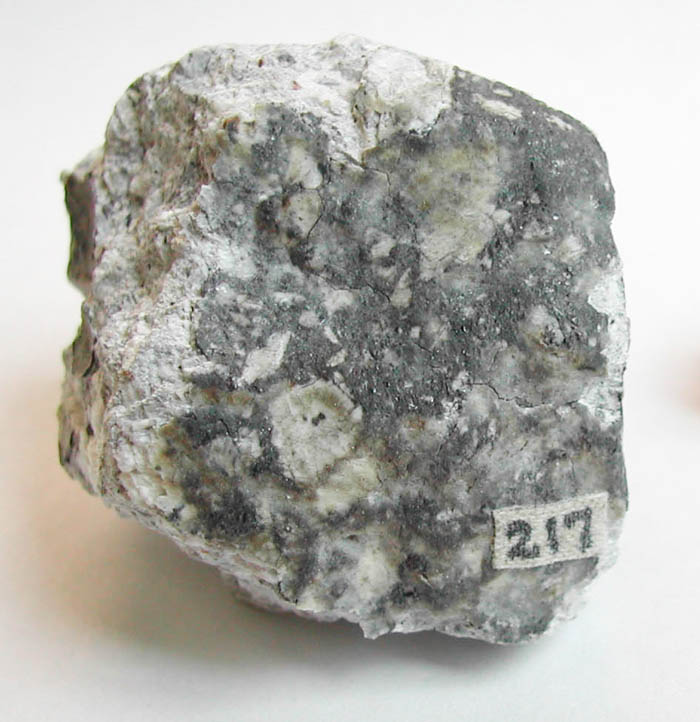 The archaic use of the word “cumber” is to trouble or harass so presumably, especially given the record of political unrest across the Cumberland region of Scotland/England back a thousand or so years, the folks of the area may have preferred a certain way of life thus cumbering the powers-that-be bent on claiming government ownership of the land.

A more modern definition often stemming more from the word encoumber which is the act of cluttering up something is to encumber it. Essentially aubrites, and in particular the polymict breccia Cumberland Falls is cluttered up. Continuing, the state of being cluttered up is to be cumbered. Further, cumbered can also mean to “be in the way of” or “to hinder.” 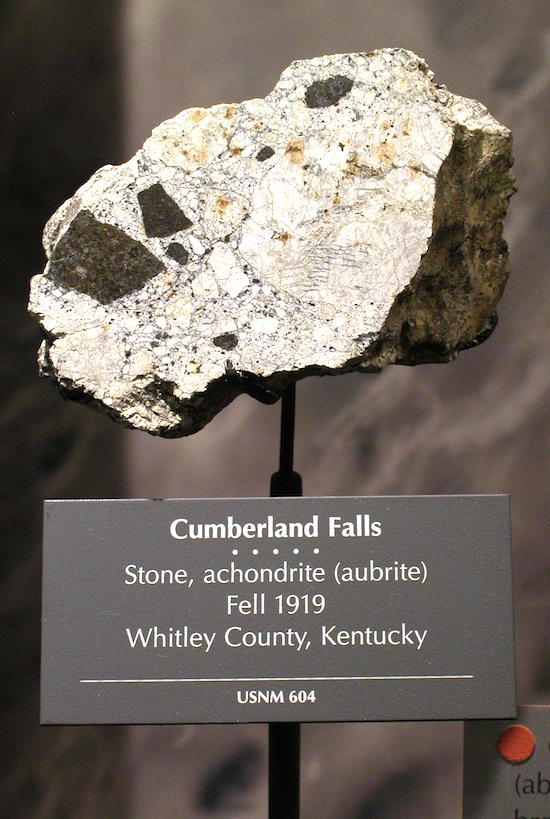 The following article written in 1919 by Arthur M. Miller of the Department of Geology at the University Of Kentucky represents the possible first scientific report documenting the Cumberland Falls fall and the study of the meteorites themselves.

On April 9, last, a brilliant meteor was seen at mid-day to fall in a northwesterly direction across northeastern Tennessee. Though the sun was shining in this section, observers describe the light from the meteor as exceeding the sun in brightness. Passing over southeastern Kentucky, where the sky was obscured by clouds, the meteor made its presence known by violent detonations, accompanied by the spalling off of fragments.

The first of these fell near Sawyer P.O. [post office], not far from the Falls-of-the-Cumberland. The concussions produced by the bolide were terrific, causing buildings to rock, and producing the impression on some that the region was being visited by an earthquake.

The first news of the phenomenon printed in the local papers so recorded it. Realizing that the detonations heard and shocks felt were due to the concussions produced by a falling meteorite the writer through the medium of these local papers, and by correspondence with postmasters and telegraph operators throughout the district affected has succeeded in determining the path of the meteor and has secured a number of the fragments.

The main mass appears to be yet undiscovered. Falling in the most rugged and sparsely settled portion of southeastern Kentucky the prospects of this main mass being found are not promising.

The general azimuth of the meteor in its fall seems to have been about north 30 degrees west. Over Kentucky it paralleled roughly the line of the Cincinnati Southern Railroad. 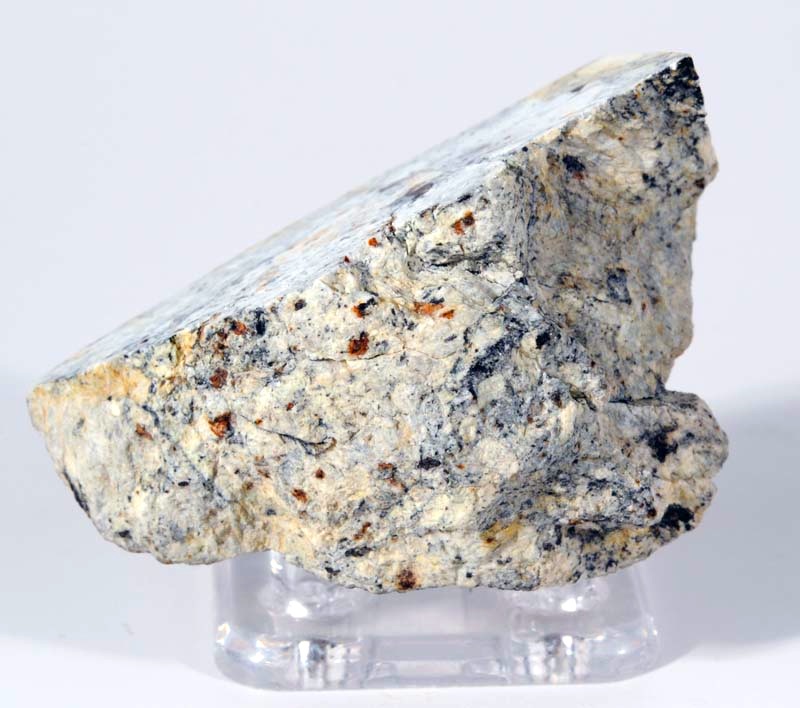 An interesting incident in this connection is the record of the progress of the meteor kept by the telegraph and telephone operators in the railroad stations and signal towers. They actually put it on a schedule something like an “extra,” and heralded to operators ahead the arrival opposite them to the east of this mysterious visitor.

The operator on another branch of the Southern Road at Coal Creek, Tennessee saw the meteor disappear to the northwest at 12:21 PM. The tower man at Tatesvile, Ky., heard violent, detonations to the east, and felt his tower rock at 12:27.

Telephoning ahead to the Danville, Ky., operator, while yet talking to him he heard him reply at 12:30 “I hear it coming now.” The distance from Tatesville to Danville in an airline is 48 miles. It took the meteor sounds, therefore, 3 minutes to travel this 48 miles. How much of this is due to the rate of sound traveling in air and how much to the northwest component rate of the falling meteorite can not at present be stated. It seems now to be pretty well established that the meteor never crossed to the west side of the Cincinnati Southern Railroad.

For the forthcoming Bulletin of the Kentucky Geological Survey the writer has delineated upon a map of a portion of southeastern Kentucky the area in which all the fragments of the meteorite will probably be found.

At present writing seven pieces ranging in weight from 13 oz. to 5 1/4 lbs. have been found that by their covering of glaze indicate that the[y] split off from the main mass at a considerable distance from the ground.

Fifty-two pieces weighing from less than an ounce up to four pounds have been found that are parts of a mass weighing originally about 31 pounds. This mass was broken into these numerous fragments as the result of falling on top of the conglomerate cliff which forms the-walls of the gorge of the Cumberland River below the Falls.

The larger fragments, which split off from the main mass at a considerable height, besides the covering of glaze, have the characteristic pittings of meteorites. They are light gray in color, and exhibit a brecciated structure. A chemical examination of the material of which they are composed, made by Dr. Alfred Peter, of the Kentucky Agricultural Experiment Station, shows it to be mainly the mineral enstatite (silicate of magnesium).

Through this is disseminated microscopic particles of nickel-iron and iron combined with sulphur in an amount not exceeding two tenths of one percent. Small amounts of sodium and calcium are also present. The meteorite would therefore be classed as a chondritic aerolite. It has the same specific gravity as enstatite, 3.18. 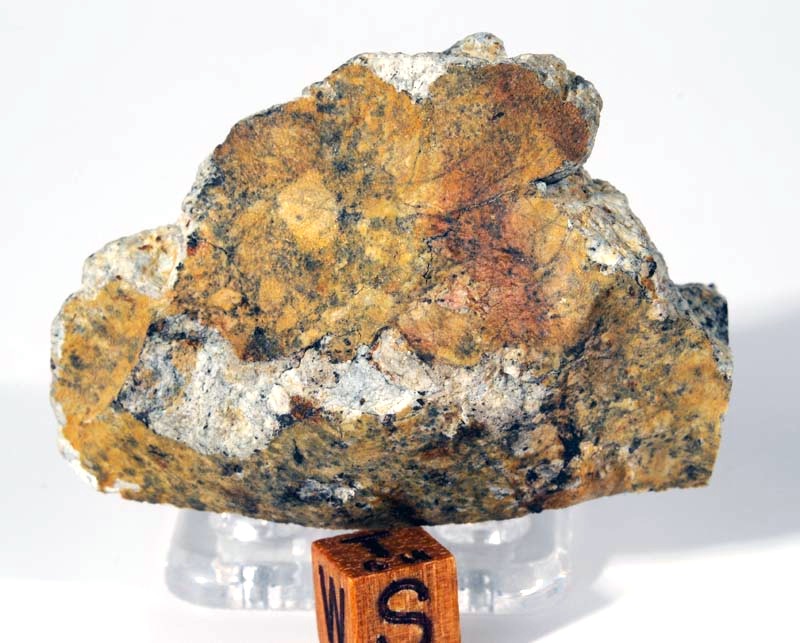 It is interesting that as late as 1919 an obvious achondrite like Cumberland Falls should be mistaken for a chondrite. Or is it?

Intact specimens of Cumberland Falls look much like fresh loaves of bread, in particular a Brioche, with the brown fusion crust wrapping a white bread interior. Although bread crust is caused by the Maillard reaction instead of atmospheric friction, the visual effect is the same. But no matter how you slice it, Cumberland Falls is an amazing gift from space. 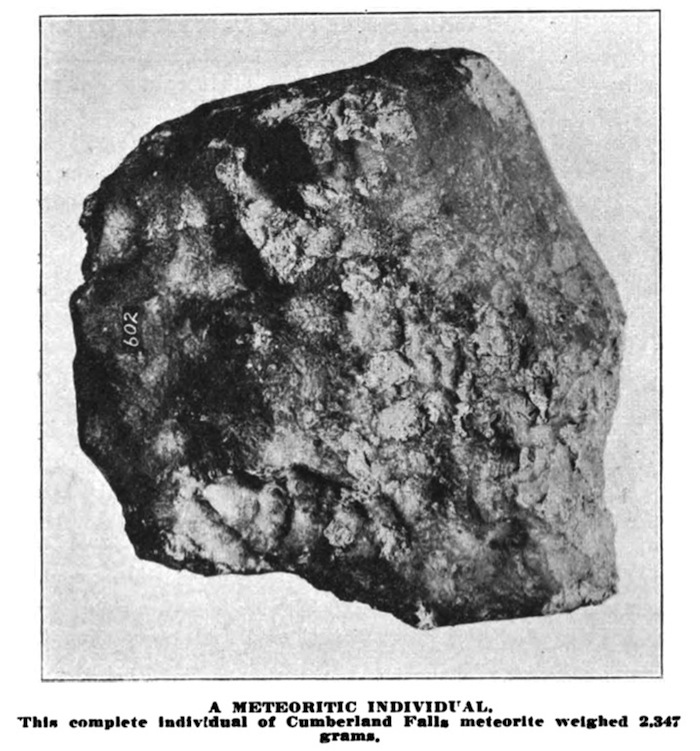 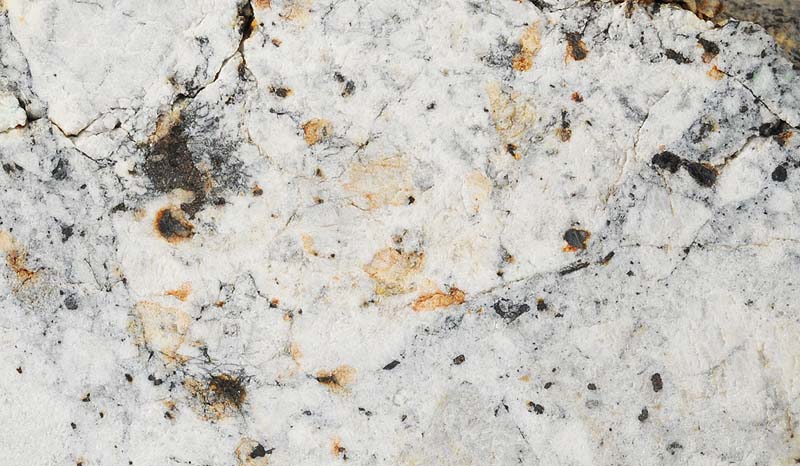 According to the garden-fountains website, “There is a local haunting legend that states one such newlywed couple visited the falls only to meet disaster. In the 1950’s the couple was on their honeymoon and spent it admiring the falls.  They hiked up to the overlook of the falls to get some good pictures towards evening.  The bride wanting to get an unusual pose stood on a pillar near the cliff.  She slipped and fell 70 plus feet to her death.  It’s said that she cried her husband’s name as she fell.  Every now and then a woman is reported to be seen floating in the air over the falls area, beckoning to those who see her.”

Me, I’ll always imagine a meteorite falling by the falls beckoning to be collected.

Dr. Martin Horejsi is a Professor of Instructional Technology and Science Education at The University of Montana, Missoula. A long-time meteorite collector and writer, before publishing his column "The Accretion Desk" in The Meteorite Times, he contributed often and wrote the column "From The Strewnfields" in Meteorite Magazine. Horejsi is also the Lead Technology Reviewer for The National Science Teaching Association, and just celebrated his 22th year working with NASA and the JPL in education and public outreach (EPO), and is a NASA Solar System Ambassador. Horejsi specializes in the collection and study of historic witnessed fall meteorites with the older, smaller, and rarer the better. Although his meteorite collection once numbered over a thousand pieces with near that many different locations, several large trades and sales and trades have streamlined the collection to about 250 important locations with all but 10 being witnessed falls. Many of the significant specimens in Horejsi's collection are historic witnessed falls that once occupied prominence in the meteorite collections of Robert A. Haag, James Schwade, and Michael Farmer. Other important specimens were acquired through institutional trades including those from The Smithsonian Institution, Arizona State University, and other universities. Horejsi was awarded the Harvey (Nininger) Award in Tucson in 2006, The Brotherhood of Guardians of the Ensisheim Meteorite in 2011, a JPL Inspiration Person, on the JPL STARDUST Team that was awarded the Smithsonian Air and Space Museum Annual Trophy in 2008, and former board member of the International Meteorite Collectors Association, and the Northwest Council for Computers in Education.
PrevSurprises In Unclassified Meteorites
Indochinite Tektite Half DiscNext