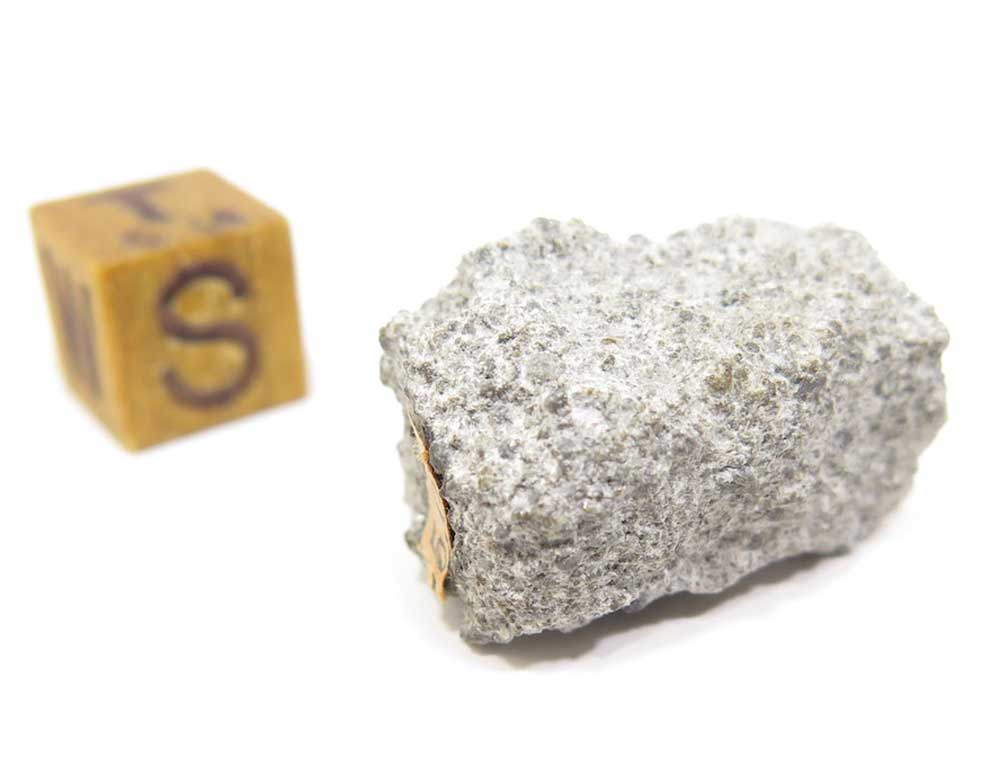 On a summer morning at about eight o’clock, a large stone meteorite entered the airspace above Allegan, Michigan landing on a spot of ground known as Thomas Hill. It was Monday July 10, 1899. The Allegan meteorite is classified as an H5 chondrite, one of the most common types of meteorites to fall on this world. But what seems like the end of the story, is really just the beginning. As a collector of the stories surrounding meteorite falls as much as the stones and irons themselves, Allegan is a spectacular example of when a chunk of cosmic geology crashes through the filter of human interpretation. 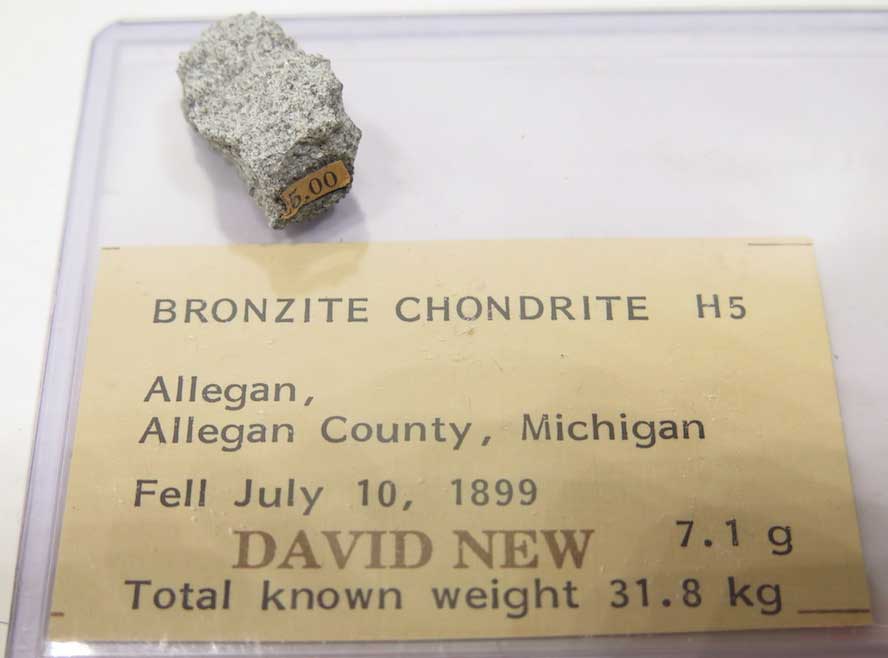 I picked up my specimen of Allegan from David New back in 1994. Dealing with David was always such a pleasure. His suggestions for new collectable meteorites were always welcome and the $35 he charged me for the six gram blocky specimen of Allegan seemed a deal even back then. And with each meteorite comes a story, and those stories following historic witnessed falls are some of the best. And Allegan does not disappoint. Plus, my specimen of Allegan has an old price label that I think might be from the Ward-Cooney collection. 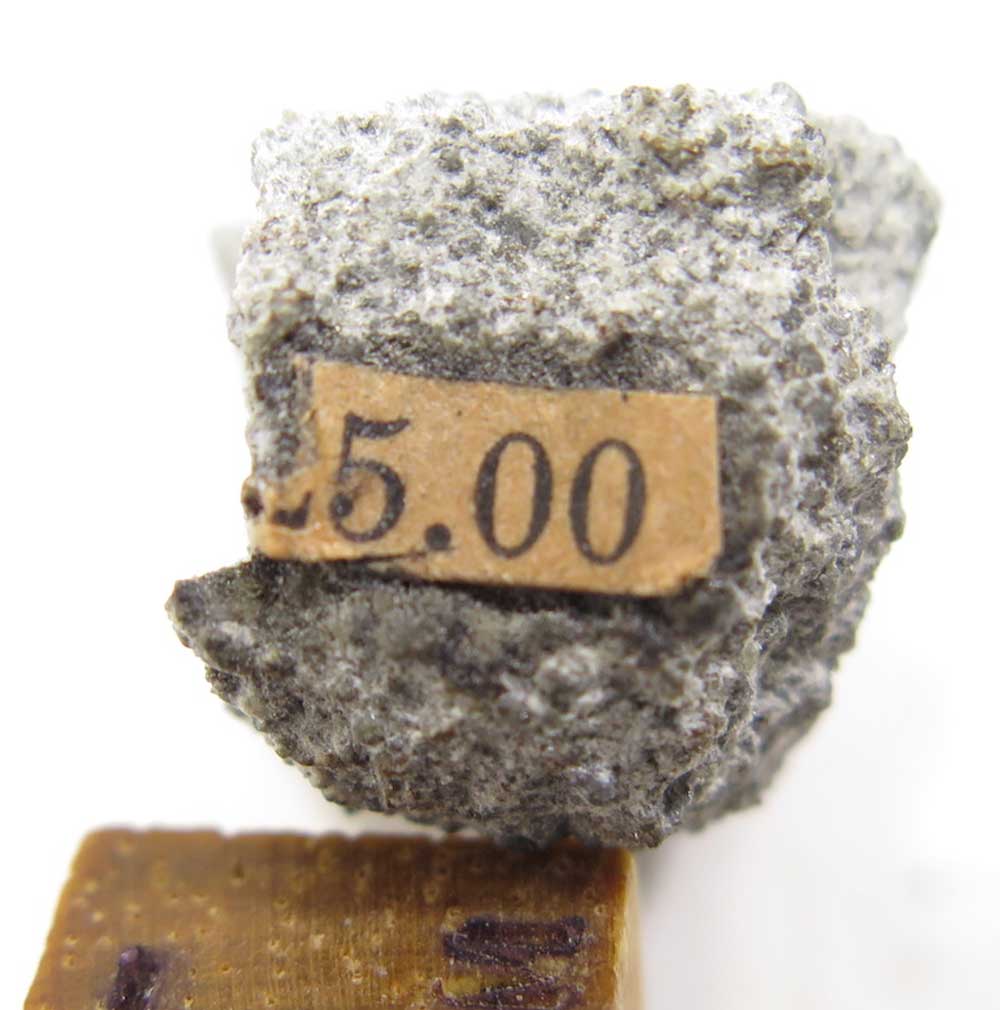 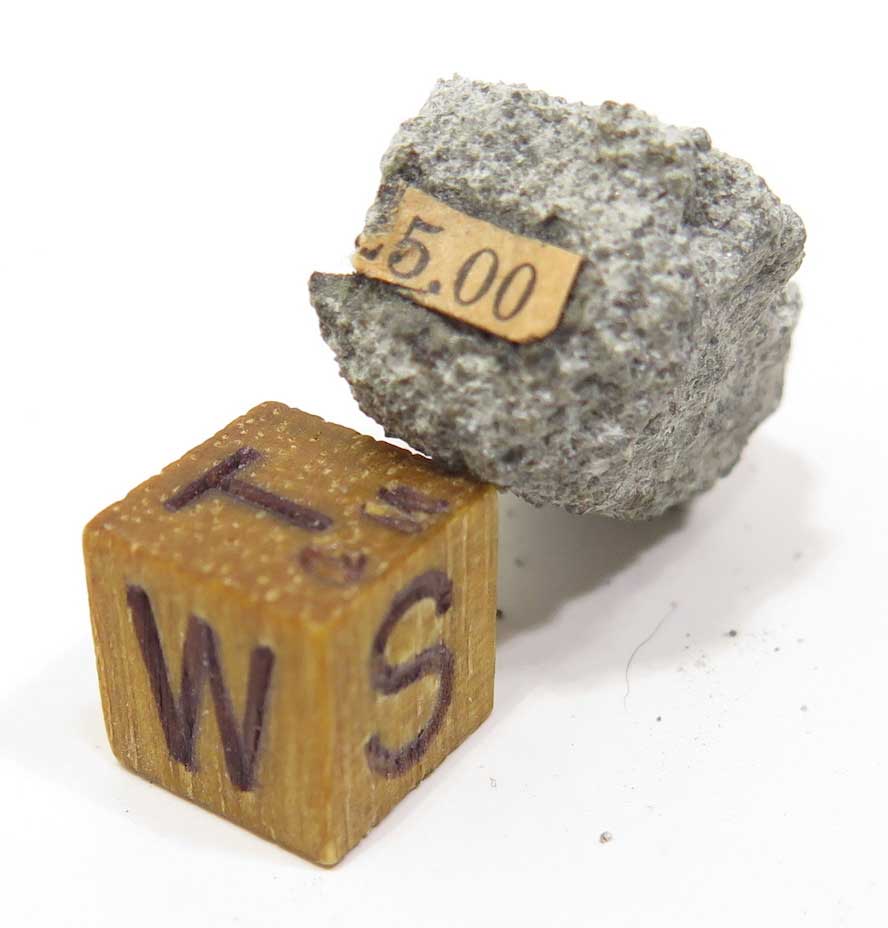 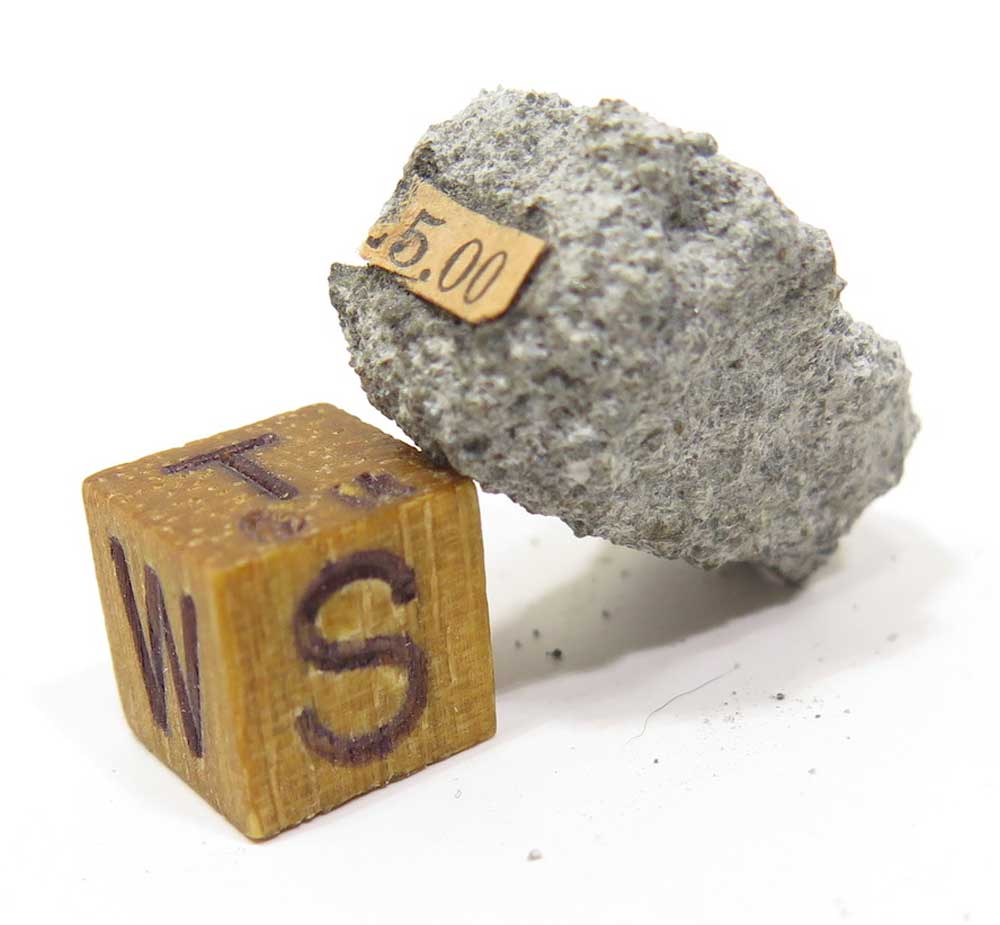 A publication by the Washington Academy of Sciences, June 25, 1900, titled A New Stony Meteorite From Allegan, Michigan and written by George P. Merrill and H. N. Stokes contains some tasty insights into what I believe are the distortions of time and temperature when it comes to meteorite falls. Time at its core is simply a measurement of change. No change, no time. And temperature is just the relative motion of atoms. Which also means if the motion of the atoms stops, say at absolute zero, then time too stops, or more likely ceases to exist. So time and temperature are foundations of the universe, and thus great indicators of events. And in the case of Allegan, both seem to have gone through some sort of Star Trek distortion field as reported by witnesses. But you be the judge. 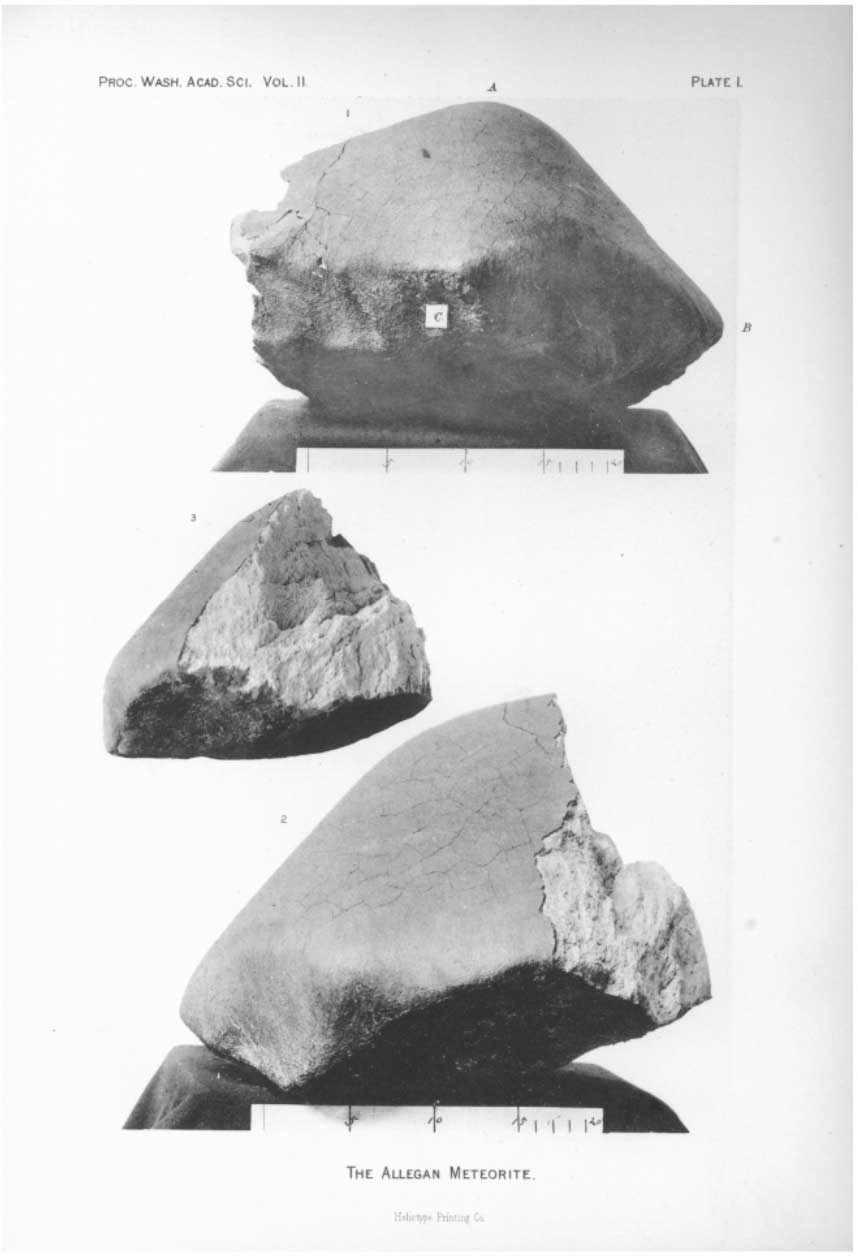 Of the many threads woven into the Merrill/Stokes article, a few of the most notable observations are highlighted here. First of all, we have a fairly mundane stage set with a few facts.

“The stone came from the northwest and passed within about forty feet of where he was working, striking the ground about ten rods [about 55 yards] behind, in sand, and burying itself to the depth of about a foot and a half.” 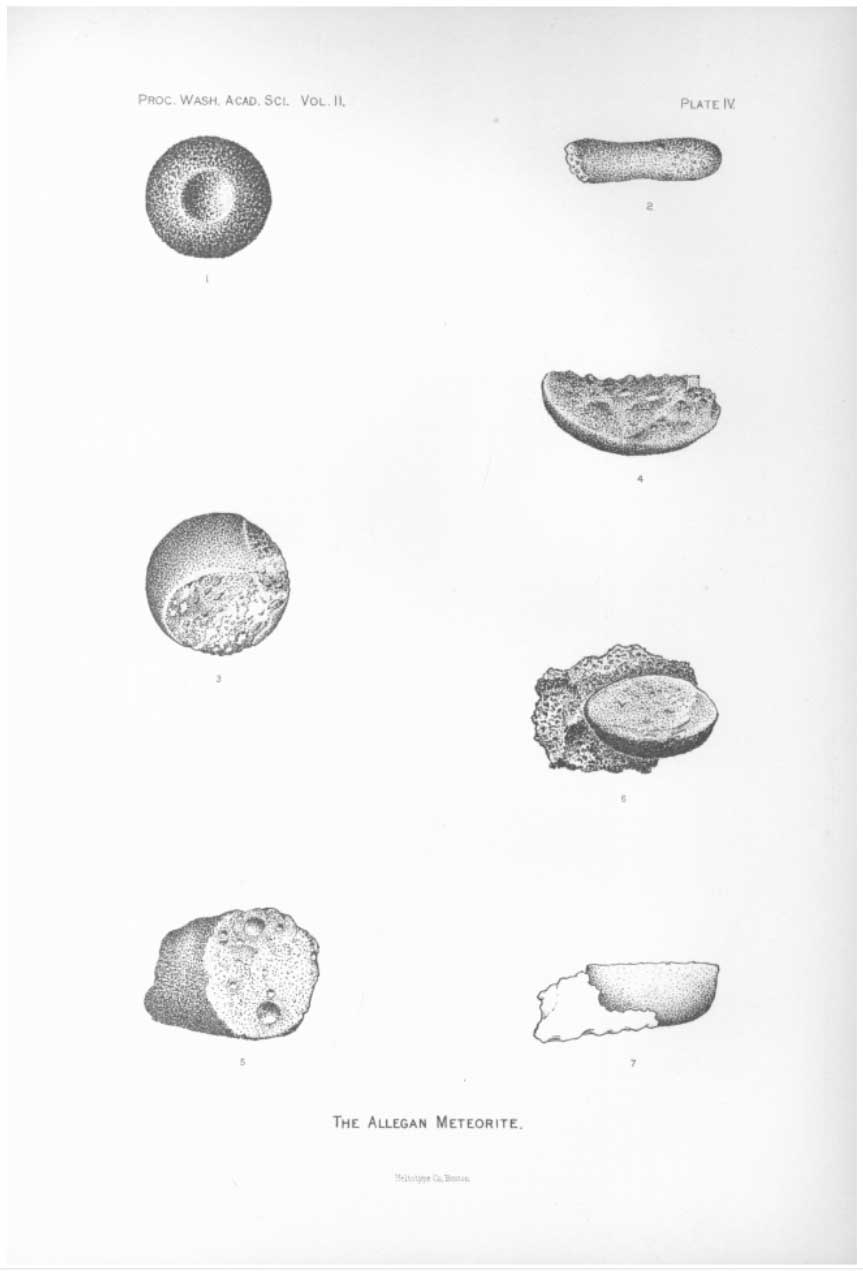 So far it sounds routine except the stone passes over three times closer to the witness compared to where it hit the ground presumably six feet or lower from the eyeballs of the witness. I get this. A meteorite fall can be a traumatic event and accurate observational measurements during the near instantaneous moment is difficult if not impossible. But let’s keep going.

“The attention of the observers, is stated, was first attracted by a cannon-like report, followed by a rumbling sound lasting about five minutes (?), which was followed, as the stone came nearer, by a hissing sound, compared to that of an engine blowing off steam.”

Here our story starts to go off the rails. Five minutes of noise is a long time. That’s 300 seconds or much longer than most jet airplanes are audible as they fly overhead. At a considerably slower speed no less. A note here that made me smile is the mention of the hissing noise sounding like an engine blowing off steam. Back in 1899, engines really did hiss to let off steam pressure in their boilers. Today, letting off steam is just a figure of speech. But back then it was a literal occurrence. Let’s continue.

“When first seen in the air the stone had the appearance of a black ball about the size of a man’s fist. As it passed the observer, it is stated, “there seemed to be a blue streak behind it, about six feet long, which tapered back to a sharp point.”

This description is outstanding for several reasons. First, the details are extraordinary, and as if time slowed down for specific measurements and observations to be memorized. A black ball the size of a fist (think baseball or softball) moving slow enough and close enough to watch is hard to believe. But it gets weirder.

“The stone was dug up about five minutes after striking and is stated to have been too hot for handling, necessitating removal with a shovel.”

Now hot meteorites are nothing new, but this particular one sounds absurdly hot. So hot that more was mentioned about it’s extremely high temperature then just too hot to touch. The shovel was a nice touch, but wait, there’s more.

“The Sand was hot for about two feet around where it struck.”

We have moved from Star Trek to the Twilight Zone. Not only was the meteorite hot, but it was so hot that a sphere of sand with a four foot diameter was now also hot. That’s nearly a cubic meter! Sand has a specific heat of 0.67 meaning that its pretty good at holding heat but also that its low heat transfer coefficient acts as a double edged sword by both making it harder to heat as well as keeping the heat. However, sand, whether on beach or desert can be easily moved aside to access cooler sand just a few centimeters below the surface. In other words, even burning hot sand is only skin deep.

Thinking more on this, for an object to raise the temperature of sand half a meter from the source, I’d guess the meteorite would need to be glowing hot when it landed which would have melted the shovel or at least caused the wood handle to burst into flames. But wait, there’s even more!

“The sand about the hole made by the meteor was quite warm an hour after the fall and that the stone itself was still warm when placed in their shop window some two and a half hours later.”

Obviously there are some challenges here to science, but it’s the stories that matter right now.

“The stone is exceedingly friable, crumbling away readily between the thumb and fingers. Indeed it is pronounced by Dr. Merrill to be without exception the most friable meteorite that has come to his attention.”

Yes, I can vouch for Allegan in that it is a very friable meteorite. Not a good example to pass around a group of school children and expect to have anything left. In fact it seemed more grains would fall off my specimen with every click of the camera.

“The groundmass of the stone is a confused agglomerate of Olivine and enstatite particles with interspersed metallic iron, iron sulphide, and chromic iron,”

That is a great description. Confused agglomerates is a wonderful anthropomorphism. As if rocks can be confused. Love it. And love Allegan as well.

Dr. Martin Horejsi is a Professor of Instructional Technology and Science Education at The University of Montana, Missoula. A long-time meteorite collector and writer, before publishing his column "The Accretion Desk" in The Meteorite Times, he contributed often and wrote the column "From The Strewnfields" in Meteorite Magazine. Horejsi is also the Lead Technology Reviewer for The National Science Teaching Association, and just celebrated his 22th year working with NASA and the JPL in education and public outreach (EPO), and is a NASA Solar System Ambassador. Horejsi specializes in the collection and study of historic witnessed fall meteorites with the older, smaller, and rarer the better. Although his meteorite collection once numbered over a thousand pieces with near that many different locations, several large trades and sales and trades have streamlined the collection to about 250 important locations with all but 10 being witnessed falls. Many of the significant specimens in Horejsi's collection are historic witnessed falls that once occupied prominence in the meteorite collections of Robert A. Haag, James Schwade, and Michael Farmer. Other important specimens were acquired through institutional trades including those from The Smithsonian Institution, Arizona State University, and other universities. Horejsi was awarded the Harvey (Nininger) Award in Tucson in 2006, The Brotherhood of Guardians of the Ensisheim Meteorite in 2011, a JPL Inspiration Person, on the JPL STARDUST Team that was awarded the Smithsonian Air and Space Museum Annual Trophy in 2008, and former board member of the International Meteorite Collectors Association, and the Northwest Council for Computers in Education.
PrevThe Classification Process
Canyon Diablo 373 GramsNext