The 1766 Fall of the Albereto Meteorite: Electric Fluids and Bronzy Grains 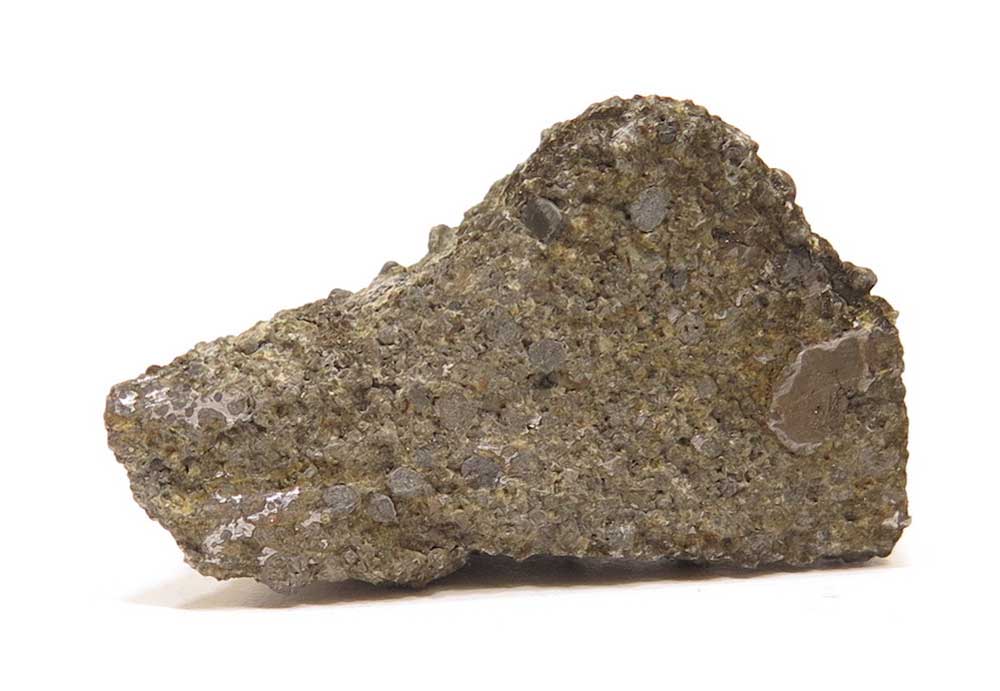 If a meteorite falls in the woods and nobody writes an account of its arrival, does it count as a witnessed fall? Or perhaps maybe this: it was a dark and smokey streak across the sky. Oh, and include a fiery explosion, a fierce whistling, and a cow knocked off its feet! Oh yeah, and that two women had to hug trees to avoid the same fate as the cow.

Everything about the 1766 fall of the Albareto, Italy meteorite is exceptional and normal at the same time. Since the understanding of meteorites as extraterrestrial material falling to earth was still a few years off from 1766, the work of Domenico Troili assembling eyewitness reports as well as a specimen of the stone is even more impressive given that he had no idea what he was really doing. And also of note is that 1) the stone was described as being warm when retrieved from its meter-deep hole, and 2) it was promptly broken up into pieces and distributed about the town (all totally normal, of course). 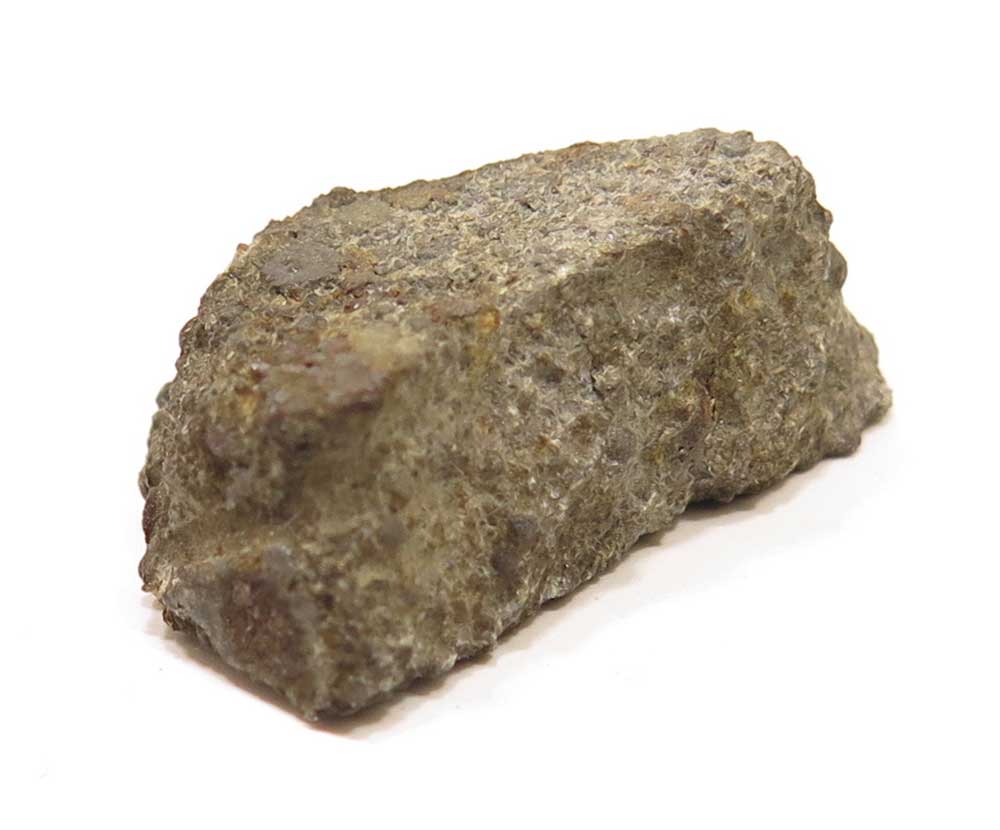 The Jesuit Father Troili described his single specimen of Albareto as, “Very heavy, magnetic and partially covered by a dark crust that appeared to have been burned by fire.”

Further, under a microscope, Albareto “looked like sandstone with shiny particles of metallic iron and bronzy grains.” The bronzy color was enough for Troili to name the mineral with the Arabic word for pyrite; marchesita. 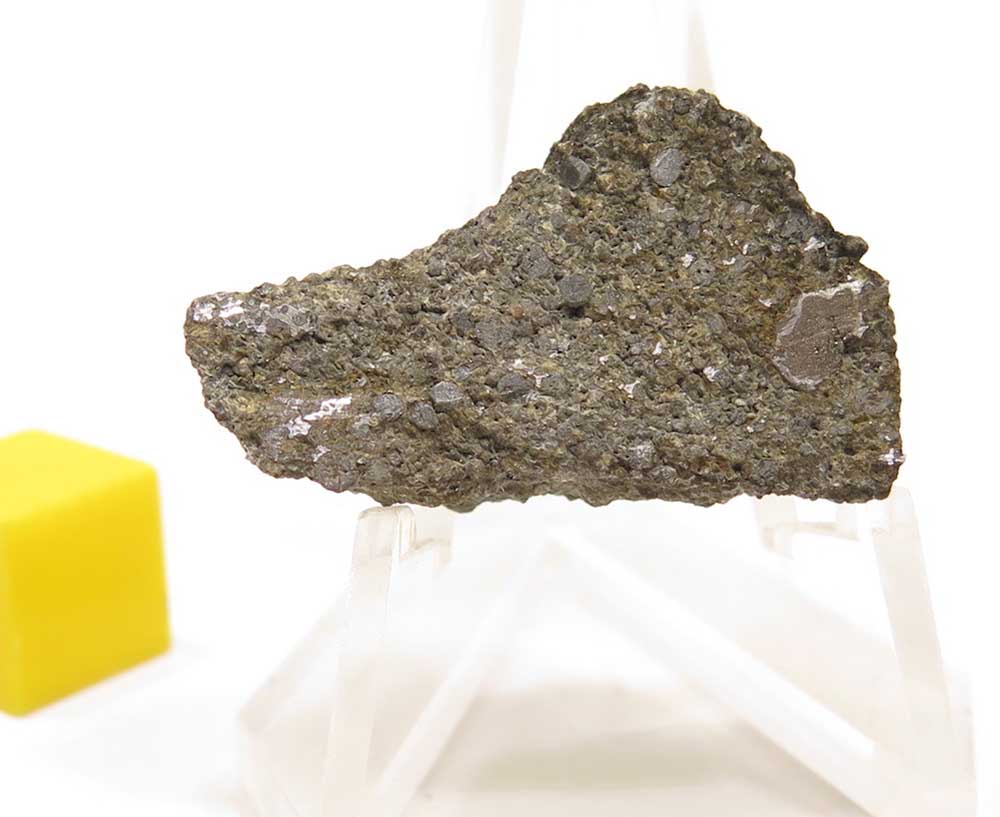 Troili wrote about the Albareto meteorite in a 120 page tome issued within weeks of the fall with the title, About the Fall of a Stone from the Air, Explanation. It was that attempted “explanation” part that missed the mark. But in 1766, who really cares, right?

Preferring a scientific approach rather than a supersitious one, Troili concluded that the stone, “is a subterranean explosion that hurled the stone skyward.” A lightly similar fate awaited the explanation of Siena some 28 years later. 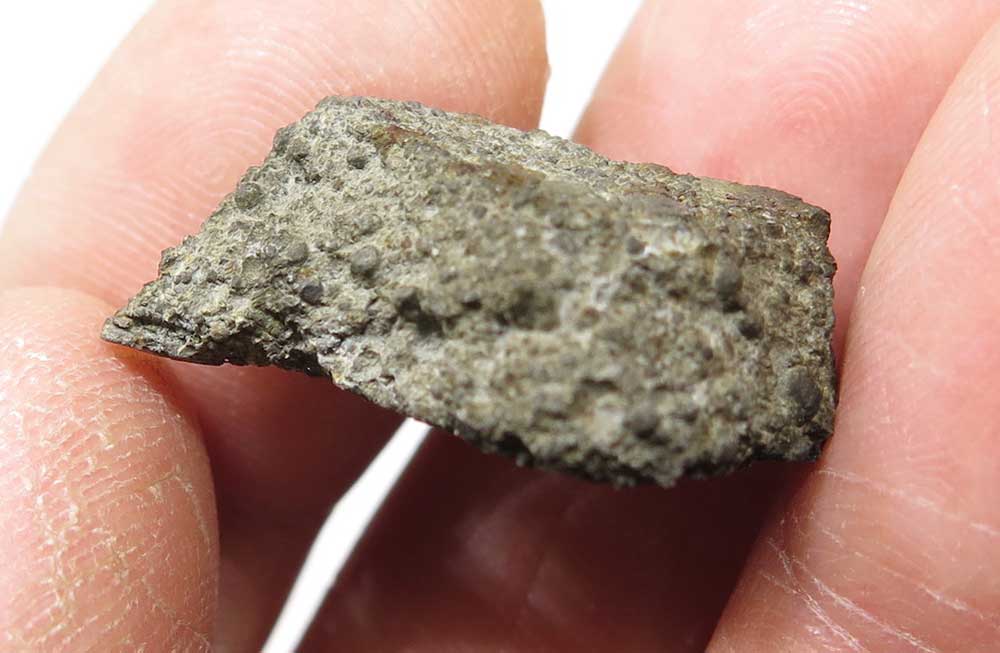 But where the arrival of Albereto really stand out is with the unintentional and sideways contribution Benjamin Franklin added to intellectual mix. It seems that someone powerful who really cared, namely Bishop Giuseppe Fogliani of Modena, did agree that Albereto 1) fell from the sky, 2) originated on the Earth, and 3) had been sent skyward by a natural process. However, Bishop Giuseppe Fogliani vehement parted intellectual company with Troili over a significant disagreement regarding the underlying process that caused all this ruckus in the first place. The Bishop, an apparent fan of Ben Franklin’s work, required a lightening bolt to run the show since that was truly the new hotness in science. 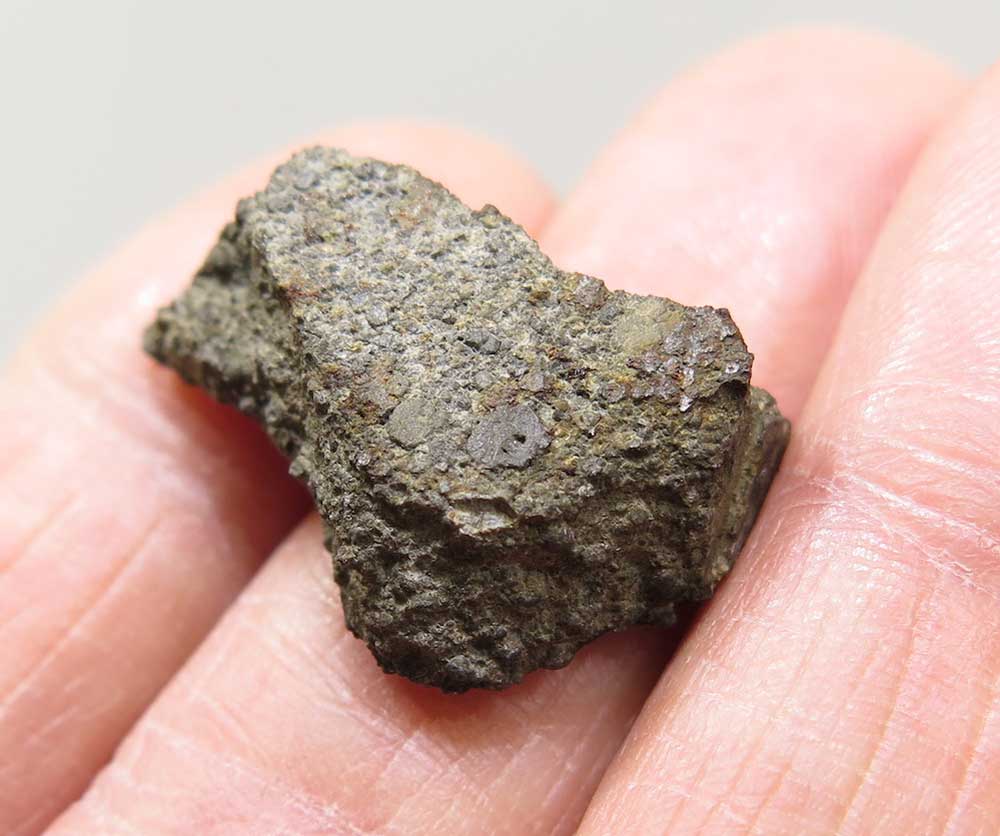 Like quantum theory today, we are hard pressed to explain anything or everything without a requisite nod towards the strange and spooky physics of the super subatomic realm.  And thus the Bishop’s fondness for the newest science of “Electric Fluids” required, if not demanded, inclusion of electricity in all scientific explainations henceforth.

In specific he wrote, “The soil at Modena is full of the nearby water and that a thunderbolt had driven through the stone, which was metallic, and hurled it into the air while covered by its own flash, so it could not be seen until it fell back down.” 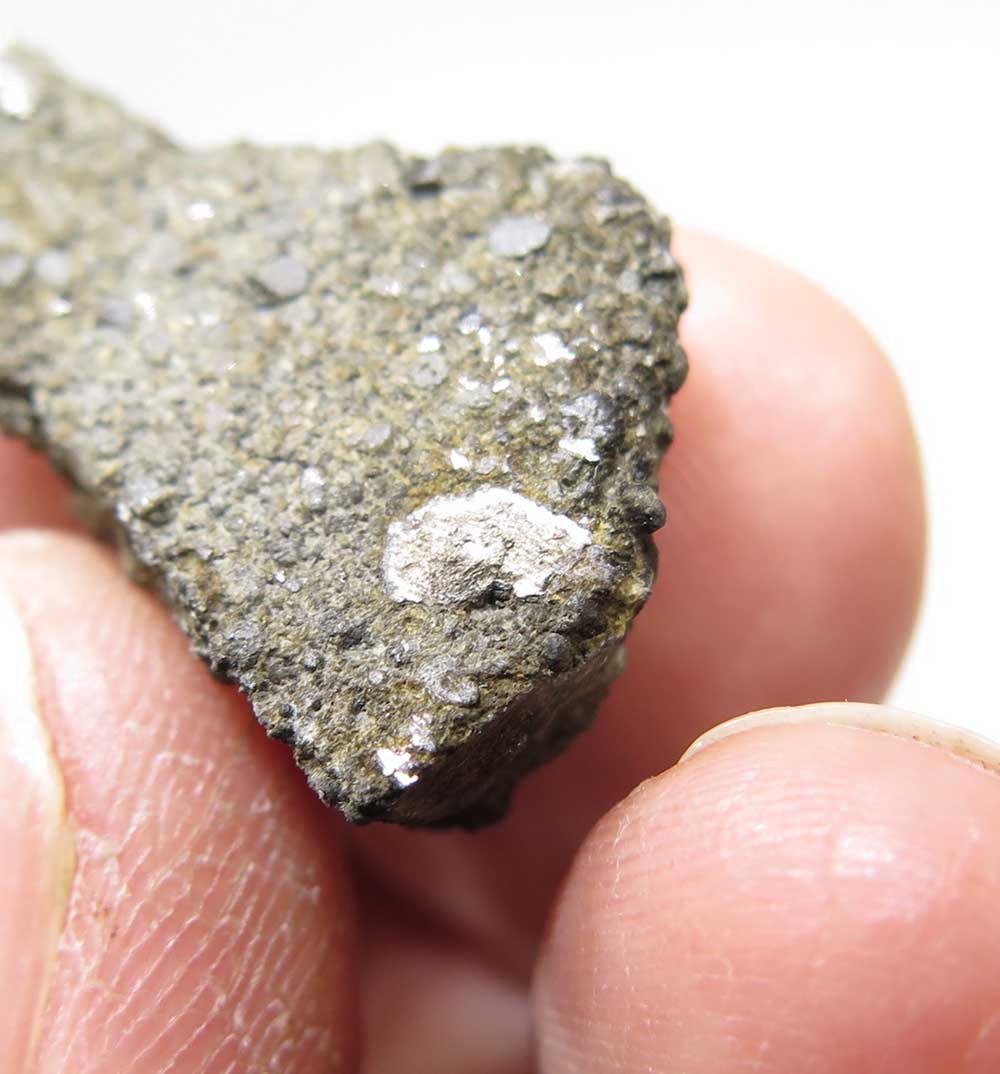 While the academic battle quitely raged between Troili and the Bishop, time flowed on. A century later, Wilhelm Karl Haidinger further studied the bronzy material that Troili noticed in his initial observations of the Albereto meteorite. Rather than the iron disulfide of pyrite, the material was actually straight up iron sulfide as noted by German mineralogist Gustav Rose. Rose, upon his discovery, named the mineral Troilite to commemorate Domenico Troili and his pioneering mineralogical work with Albereto. Haidinger popularized the naming of the mineral after Domenico Troili.

Once the dust of history settled, at least two key features of this tale stand out. First, although Domenico Troili could not comprehend that the Albereto stone came from outer space, his work after Albereto was on earth was exceptional and thus worthy of note identifying Troili as the first person to describe the fall of a meteorite, a pronouncement made by none other than H. H. Nininger himself. Later, (after Rose’s proclamation, but before Nininger was born, of course) Ernst Chladni would be given a similar credit, but in this his following case, Chladni already believed that meteorites were extraterrestrial and thus no cumbersome and awkward terrestrial origin was needed. However, for Chladni, now a cumbersome and awkward exterterrestrial explanation was in the works. 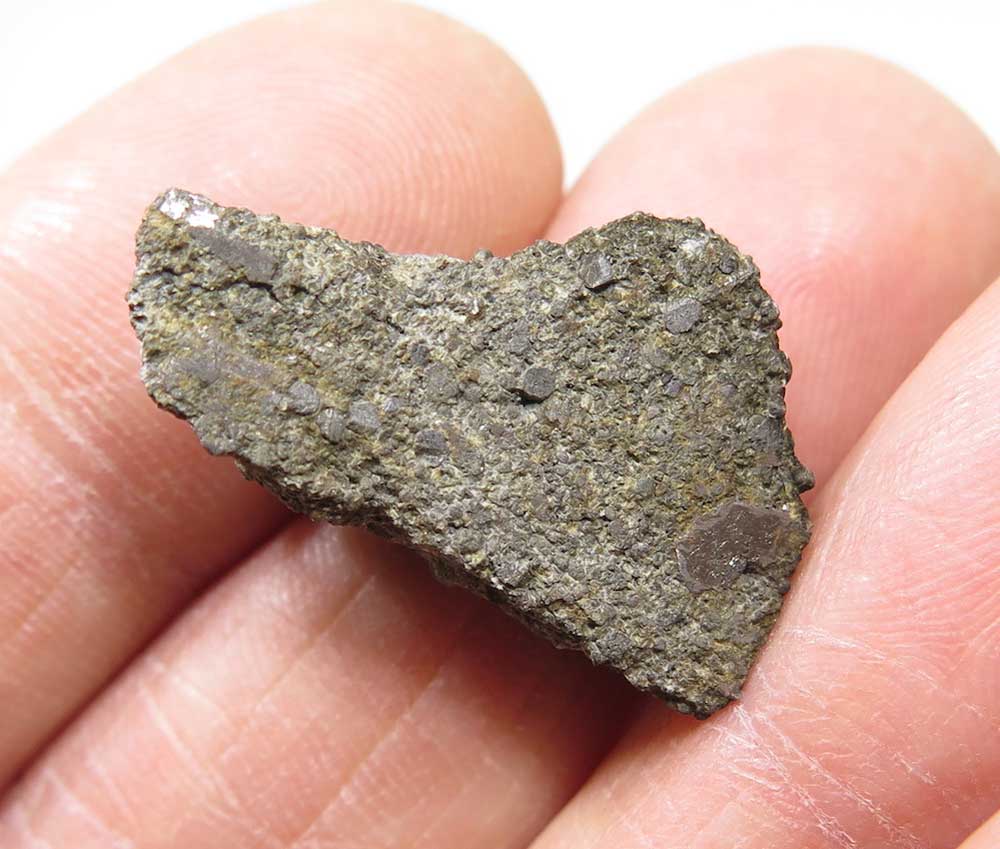 The second consideration of note is that the total known weight of Albereto has swung from a historic high of 12kg to a recent low of 2kg. The reason appears to be the difference between Troili’s 12kg TKW observation-based guess at the time of the fall, to a loose accounting of all available Albereto material in collections presently.

As was recorded shortly after the fall of Albereto, the single stone was “hacked” to pieces. “Hacked?” Splitting semanitc hairs? Possibly, but there is plenty of credit to go around without arguing the semantics. But oddly, “hacked” has been used often to describe what happens to meteorites upon arrival to earth. I’m not sure the “hacked” fate awaits meteorites crashing into Mars, the Moon, or anywhere else but here. Perhaps that’s really a feature of us earthlings, not a bug.

Often I must read between the lines, and convert the past into the present in order to better understand and interpret the meteorite falls of the past. With Albereto, so  much obvious was in play that the nuances of specific detail are just tasty icing on the intellectual cake. Honestly, the majority of the excitement of collecting historic meteorite falls is found within their stories while at the exact same time one holds the actual meteorite material your own hand. The same material Troili held. And Chladni. And Nininger.

Dr. Martin Horejsi is a Professor of Instructional Technology and Science Education at The University of Montana, Missoula. A long-time meteorite collector and writer, before publishing his column "The Accretion Desk" in The Meteorite Times, he contributed often and wrote the column "From The Strewnfields" in Meteorite Magazine. Horejsi is also the Lead Technology Reviewer for The National Science Teaching Association, and just celebrated his 22th year working with NASA and the JPL in education and public outreach (EPO), and is a NASA Solar System Ambassador. Horejsi specializes in the collection and study of historic witnessed fall meteorites with the older, smaller, and rarer the better. Although his meteorite collection once numbered over a thousand pieces with near that many different locations, several large trades and sales and trades have streamlined the collection to about 250 important locations with all but 10 being witnessed falls. Many of the significant specimens in Horejsi's collection are historic witnessed falls that once occupied prominence in the meteorite collections of Robert A. Haag, James Schwade, and Michael Farmer. Other important specimens were acquired through institutional trades including those from The Smithsonian Institution, Arizona State University, and other universities. Horejsi was awarded the Harvey (Nininger) Award in Tucson in 2006, The Brotherhood of Guardians of the Ensisheim Meteorite in 2011, a JPL Inspiration Person, on the JPL STARDUST Team that was awarded the Smithsonian Air and Space Museum Annual Trophy in 2008, and former board member of the International Meteorite Collectors Association, and the Northwest Council for Computers in Education.
PrevFifty Years of Cutting Meteorites
Itqiy 4.22 gramsNext