Splashform tektites largely assumed their geometric form during aerodynamic flight, giving rise to a wide variety of dumbbells, teardrops, patties, spheroids, and similar forms. Amongst the splashforms, there is a subclass which I term “splatforms” which show deformation of primary shapes suggestive of having “splatted” against some hard surface while yet very plastic. 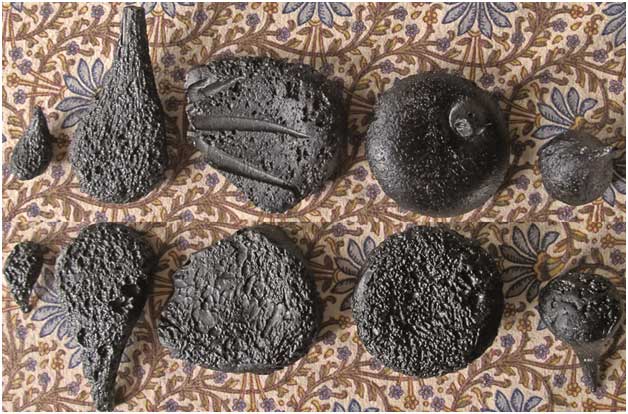 In the last column of this series, I dodged the question regarding what splatform tektites may have splatted on. Like so many tektite topics, this proves to be a more challenging question than it might first appear. For years, I took it for granted that it was simply impact on the surface of the ground, but there are problems lurking in that assumption.

The deformation involved clearly took place while the primary morphologies were still mostly molten. They had gooey interiors and solidified skins that were in the transition from stretchy to brittle. The areal distribution of good splatforms requires flight paths hundreds of miles in length. Consider the small side-splatted teardrop at the left in the foregoing image. It weighs 6.7 grams. Such a small mass would have a very limited heat budget, particularly when passing through the sub-zero temperatures in the upper atmosphere. How could it retain sufficient plasticity to splat when it hit the ground after even a short flight? The “dragon-track” skin-split specimen splatted so flat that the brittle skin split revealing a stretchy, low-viscosity interior (exactly like a stretch tektite). Next to the right in the image is a large teardrop that splatted nose-first. Its tail telescoped into the molten center, leaving only its brittle tip protruding. This one was able to swallow the volume involved without the skin splitting, indicating it was still very, very hot at the time it splatted. The far right specimen is a hersheys kiss, also a nose-first splat, but less telescoped, probably due to the more limited heat budget of a smaller mass.

Not only is the heat budget and long-distance flight a problem, but it is also noteworthy that not a single tektite known to me has any foreign object (i.e., a pebble or another tektite) embedded in its basal surface. (People sometimes get confused by ferruginous laterite adhesions that look like embedded pebbles. They are not). Nor have I ever seen the recognizable imprint of any foreign object marking a splatted surface. Early on I wondered if this might be explained by wet ground at the time of the tektite shower, but once again, the areal extent of splatform distribution, which includes southern China, Vietnam, Laos, Thailand, and neighboring areas, is simply too large to call on uniform ground conditions throughout. This was mostly all densely vegetated country as well. Where are the burned out limb casts or reed imprints like we see in Dakhleh impact glass? Where are the pieces that look like they draped across something they landed on? 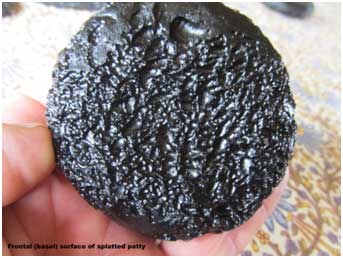 The idea of a wet ground surface was inspired by the distinctive textures seen quite universally on the basal surface of strongly splatted specimens. In the first image, tops and bottoms are shown in the upper and lower rows respectively. I have seen this style of deep pocking on the base of molten lead or aluminum that has pooled on bare ground. I presume that this is due to jets of steam and gas scorched from the baking soil beneath the molten metal.

But, if we are forced to seriously question the premise of splatting via impact on the earth’s surface, what alternatives can we consider? Perhaps the best candidate is the hard face of the sky itself. In this context, water-skiing offers experiential insight: take a spill on a high-speed corner, and the surface of the water feels more like a solid than a liquid. I vividly recall skipping across the surface, and feeling relief when the water finally softened enough to take me in! In the case of meteorites striking even the rarified edges of earth’s atmosphere, it is common for them to shatter as if it was stony hard.

Perhaps in the extremely high-energy environment of a major impact event, the flying blobs of glass build up a cushion of compressed air against the frontal surface. The pocking of the frontal surface might be quite equivalent to steam-jet pocking beneath molten metal. There, the steam jets attack the interface metal and are the moving part of the system. In the case of a compressed air cushion collecting in front of a high velocity projectile, the air is relatively still as the projectile moves into it. The results might be highly similar in either case.

This whole process would happen very early in the event, while everything was still rosy hot and flying through a proximal sky. There would be no pebbles to engulf, no tree limbs to cast and incinerate, and nothing for the plastic glass to drape around. Those with a flight time of more than a few minutes were likely cold on impact. 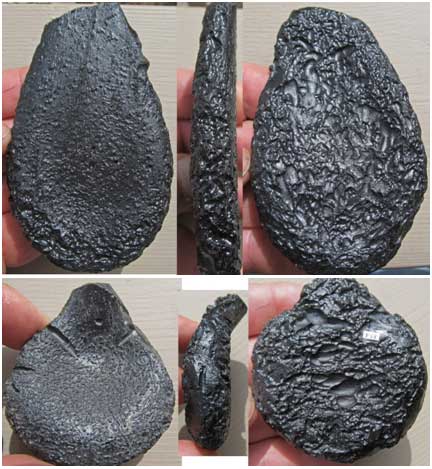 Here are a couple more fine examples of splatforms with obvious upper and lower surfaces and very clear development of basal (or frontal) “pocking”.

Teardrops of the sort shown in the two adjacent images are the morphology subject to the most extreme splatting. I think of them like water-balloons of molten glass. It seems that these primary shapes were hitting the wall (whatever it was) at nearly random orientations, ranging from nose-first to flat on the side (but I haven’t recognized any that were splatting tail-first).

I find pieces like those pictured in this article inspiring. They tell their story in graphic detail. Each one is a top-shelf museum piece, a superb example of its kind. And they are worthy protagonists, offering clues written bold and frozen in stone to help us understand what went on in the day they were born!

Norm Lehrman is a recently retired exploration geologist with over 45 years experience. His career involved fieldwork in over 35 countries on every continent except Antarctica. While stationed in Australia, Norm and his wife, Cookie, became interested in collecting Australites, which ultimately led to a generalized passion for tektites, impactites, meteorites and related materials. In 1999 they founded the Tektite Source business (www.TektiteSource.com) which has evolved into one of the world's premier providers of tektite and impactite specimens. Norm has retired to a ranch near Spokane, Washington, where they continue to serve tektite aficionados worldwide.
PrevImilac Pallasite
Tieschitz H/L3.6Next