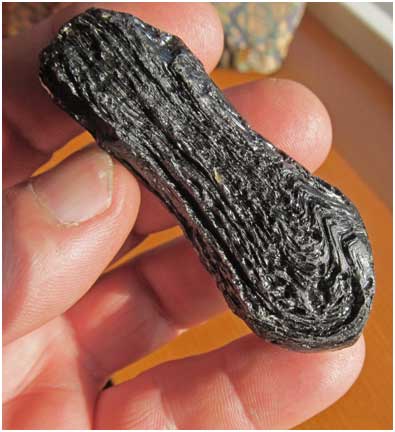 A couple of years ago, we picked out this unusual specimen while sorting through bulk Chinese tektites at the big Tucson show. It was only recently that I realized just how unusual it really is. A conspicuously layered tektite with unambiguous splash-form flight modifications??? This is an oxymoron. Most descriptions of Muong Nong-type tektites will mention their blocky character and complete lack of flight-related morphology.

In fact, it requires a feat of mental gymnastics to explain how such a specimen could fit into prevailing theories of the origin of Muong Nong layered tektites. I have always been attracted to the proposition that layered tektites are the product of “dunes” of condensate droplets or shards that settled and welded something like a welded ash flow tuff. But that doesn’t explain specimens hundreds of miles from apparent ground zero. However they were propelled, it seems it happened after they were virtually always sufficiently solidified to resist plastic modifications in flight. Would this require a two-stage origin? An initial impact that formed the siliceous condensate droplets and their accumulations, followed by a second impact to eject these?

While generally held to be impact-proximal, the distribution of Australasian Muong Nongs is too great to deny flight. Some certainly flew hundreds of miles, but geometries like that shown here are characteristically lacking. Muong Nongs typically show lower temperatures of formation than common splashform tektites, and often include relict mineral grains and vesicular textures (which I take to be terrestrial dust incorporated into the condensate droplet dunes).

And now, if this specimen is truly a Muong Nong, we have an accumulation of layered material that remained sufficiently plastic at the time of the secondary ejection to accept flight-related modifications. In this are the seeds of two interesting thoughts: first, that there were at least two impactors in the Australasian event, and second, their relative timing involved just enough time for most of the Muong Nong material to have assumed a largely brittle state. This new exception puts the “just” in “just enough time”, as in at least this instance, a bit of the material remained significantly plastic.

I realize that this may be wringing a lot of conjecture from very limited evidence, but it remains the only scenario that accommodates what (I think) I know about Muong Nongs. I would be delighted to hear any other ideas that may occur to you.

A fundamental question underpinning this house of cards is quite obvious: Is this for sure a Muong Nong tektite?

To address this question, the specimen was submitted to Dr. Michael Zolensky at the NASA JSC ARES (Astromaterials Research and Exploration Science) directorate. Fine-scale compositional heterogeneity was measured utilizing their state-of-the-art electron probe micro-analyzer. Very significant variations in major-element chemistry were revealed in adjacent layers, which is the expected outcome for a Muong Nong , as opposed to viscous flow-banding and differential etching by soil acids which is sometimes seen in splashforms.

Unfortunately, at this point we reach a critical limitation of present research: while it is commonly reported that splashform tektites show a characteristically high level of internal chemical homogeneity and Muong Nongs, in contrast, of highly compositionally heterogeneous layering, there are actually insufficient published data at the level of detail of Dr. Zolensky’s work for conclusive comparisons.

Except for the splashform external morphology, this specimen looks like a Muong Nong to the naked eye, in optical thin-section, and chemically under the microprobe. If it is, it is utterly unique, the first of its kind ever described, and it may have important clues about the Australasian impact.

A brief description of this specimen and Zolensky’s findings has been accepted for a poster session at the upcoming 77th Annual Meteoritical Society Meeting (2014) in Casablanca, Morocco. An abstract (#5342) can be located at the MAPS website. The 44 gram specimen remains in the author’s private collection. 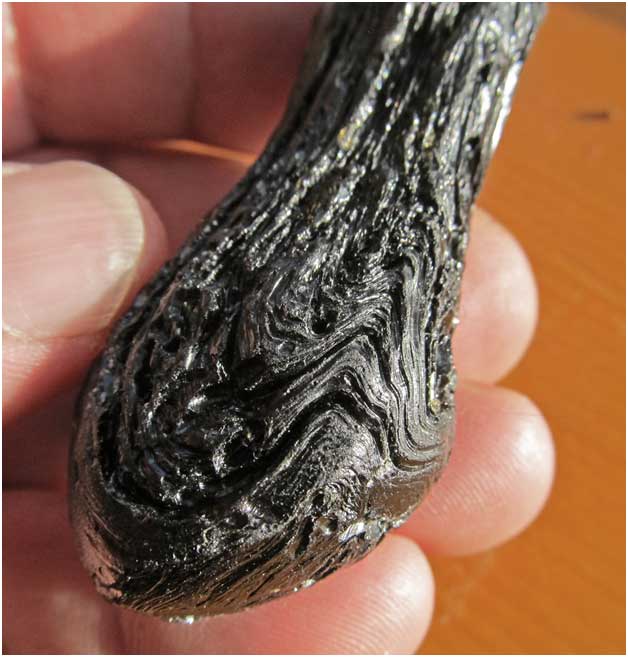 Norm Lehrman is a recently retired exploration geologist with over 45 years experience. His career involved fieldwork in over 35 countries on every continent except Antarctica. While stationed in Australia, Norm and his wife, Cookie, became interested in collecting Australites, which ultimately led to a generalized passion for tektites, impactites, meteorites and related materials. In 1999 they founded the Tektite Source business (www.TektiteSource.com) which has evolved into one of the world's premier providers of tektite and impactite specimens. Norm has retired to a ranch near Spokane, Washington, where they continue to serve tektite aficionados worldwide.
PrevDr. Arthur Ehlmann
Selma H4Next