Oscar E. Monnig was born in Fort Worth, Texas on September 2, 1902. Although he received a law degree from the University of Texas in 1925, he worked for the family business, a chain of dry goods stores all his life and eventually became the President of the Company, before selling it in 1981 as his health and sight started to deteriorate.

His scientific background was limited, as he liked to tell, to enrolling in an astronomy class that was promptly cancelled since he was the only student. He had also tried without success to convince the Smithsonian Institution, the Field Museum in Chicago and the American Museum of Natural History in New York to allow him to study their meteorites, so he then decided to create his own collection, collection that grew to thousands of specimens and that he eventually donated to Texas Christian University in his home town of Fort Worth.

Oscar Monnig was a very busy businessman so he had very little time to write or publish anything during his lifetime, however he left files upon files with the correspondence he maintained throughout his life with hundreds of people from “Dust Bowl” farmers who might have found a meteorite, to H. H. Nininger, his friendly competitor when it came to acquiring meteorites.

I was kindly given access to these files by Dr. Arthur Ehlmann, and Dr. Rhiannon Mayne, and they will be the basis for this series of articles as I let Mr. Monnig tell you the history of some of the famous or not so famous meteorites in his collection.

Somervell County is a tiny county (by Texas scale!) some 40 miles (65 km) south-west of Fort Worth. Early in his career of Meteorite Collector, Oscar Monnig heard rumors that a meteorite had been found there, and on April 3, 1937 he drove to Glen Rose where he met Mrs. L. E. West who knew all about it and gave him directions. He kept detailed notes about this trip:

On that day he had acquired all of the Somervell County pallasite, until very recently the only pallasite known in Texas. He had even obtained the fragment he had spotted imbedded in the base of the bandstand in the town of Glenn Rose; he had asked for it and the mayor of the town had allowed him to remove it under the condition that it would be replaced by a similar size stone.

As was already his habit, the Somervell was sent to the Smithsonian Institution for cutting and in December 1942, he received this letter (abridged), with some timeless advice on the care of iron meteorites:

However O. Monnig was bound and determined to preserve this meteorite. A new miracle product had recently appeared: Plastic and he carefully considered that option. He first turned to a friend, Mr. B.F. Faris of Wilmington, Delaware, who happened to work for DuPont.

The process was tried with much care, but did not go well, as Mr. Farris explains in a very long letter to O. Monnig, abridged here:

If Mr Monnig was upset or disappointed, his letters do not show it and it kept on trying to improve the appearance of the Somervell pallasite. A few months later he updated his friend about the condition of the meteorite already encased in Lucite and, despite the problems and defects he had decided to send the other two fragments.

Mr Farris responded a couple months later. Things have changed; he is no longer in Wilmington but at the University of Chicago, in the Metallurgical Laboratory. He still has the two fragments of Somervell, but now there is another problem; we are in 1943 and preserving a meteorite, even a pallasite is no longer a very pressing issue, there is a war going on, laboratories have new jobs and priorities.

There are no further letters and notes in the file but Dr. Ehlmann tells me that eventually those two pieces were also encased in Lucite, and returned to Mr. Monnig, but the process did not preserve the meteorite as intended, the cracks kept right on growing and widening and eventually the whole mass fell apart. And it is all in a big box in Dr. Ehlmann’s office, minus a few fragments that have been salvaged. 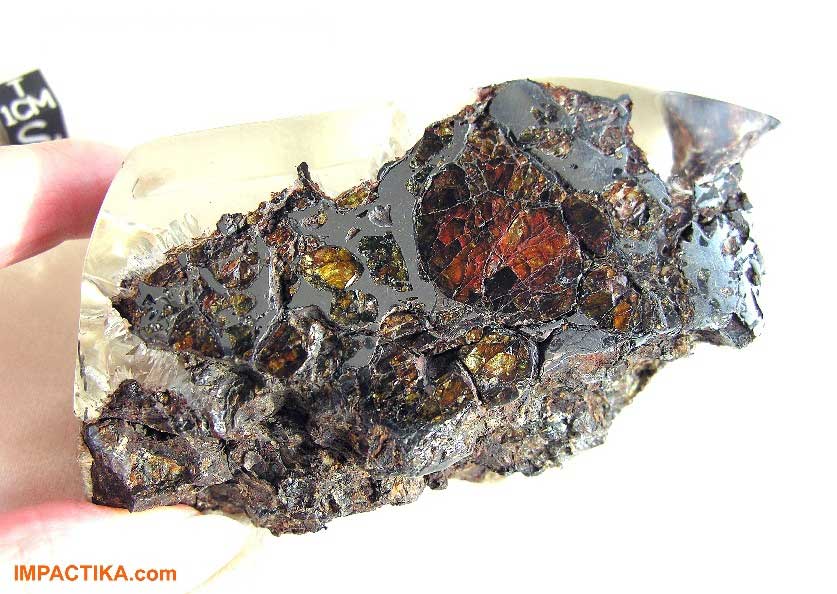 I am a French-native, who moved to the States many years ago. Being in Colorado, I discovered the Denver Mineral Show, and I met Dr Alain Carion, the French expert and I started helping him during the Denver Show. Eventually he got me interested in meteorites but I really learned all about them when he asked me to translate his book “Meteorites” into English. That led to many new things: translation of his second book on meteorites, of various articles and most of all it lead to the creation of my website: IMPACTIKA.com in 1998. As a full-time meteorite dealer I now attend the shows in Denver, Ensisheim and Tucson where I have my own showroom. Along the way I also participated in the creation of the International Meteorite Collectors Association, where I was elected and re-elected President, and wrote many articles that you will find on Meteorite-Times.com.
PrevMeteorite of the Month
Deeply sculpted BediasitesNext