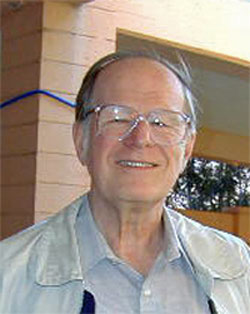 Many people in the meteorite community knew Ron as a collector and dealer. Some recall that he was gentle, patient and a generous mentor, always willing to answer a question or help solve a problem. Not everyone knows that he was also very funny. He was a constant source of inspiration to me when I was drawing cartoons for Meteorite magazine, and I must confess I stole some of my best ideas from him. Ron was a keen observer of people and events, and he had a wry sense of humor which was often quite understated. He was a quiet and very private person, so much so that he didn’t want anyone to know he was ill. Probably only people who knew him well realized how much he enjoyed a good joke or prank. And often the recipient of his jokes was Richard Norton.

Ron and Richard became friends in college. They were students at UCLA in the meteoritics class taught by Dr. Frederick C. Leonard, an early meteoriticist and one of the founders of the Meteoritical Society. With Ron Oriti they became the Three Musketeers of Meteorites. When the class took field trips to Meteor Crater in Arizona, they were able to hunt for meteorites in and around the crater with the blessing of curator George Foster. The class also visited Nininger’s American Meteorite Museum in Sedona and bought small specimens from H. H. himself. (How’s THAT for a field trip?) Later the Musketeers visited the Odessa, Texas crater and hunted dry lakes in the deserts between Texas and California. All three worked at Griffith Observatory in Los Angeles giving planetarium shows, they all continued in astronomy and they all directed planetariums. They also continued to collect meteorites. Ron Hartman and Ron Oriti developed a business selling tektites and meteorites in 1963. Later, Ron created the Hartman Collection for use in his teaching. Part of it was displayed at the planetarium and library at Mt. San Antonio College in Walnut, California, where he taught.

At UCLA, the Musketeers delighted in teasing each other and Dr. Leonard mercilessly. When Richard devised a plan to drive Dr. Leonard crazy, Ron Hartman was always ready to contribute. When Dr. Leonard announced that his prized 250 pound Canyon Diablo iron was too big to steal, they moved it into a closet after everyone else had gone home. Dr. Leonard never mentioned the incident, refusing to dignify their prank by commenting on it. Ron was Dr. Leonard’s teaching assistant and graded Richard’s tests. He had perfected Dr. Leonard’s distinctive signature – an ornate monogram FCL– and occasionally left severe notes for Richard signed FCL, which terrified him. He was afraid to ask Dr. Leonard if they were real. All this was done in a spirit of fun and never became malicious, though it often became physical. Ron liked to tell a story about Ron Oriti and Richard scuffling on the floor of Meteor Crater when they both spied a surface specimen and dived for it at the same time. Ron wondered what the tourists on the crater rim watching through telescopes must have thought was going on down there. (Ron Oriti told me it actually happened on the crater rim. In fact, it must have happened more than once. Youthful exuberance often got the better of them.) They competed in everything, even dated the same girls, much to Dr. Leonard’s confusion. He would say to Ron, “Ronald, come into my office and close the door.” Then, “Who exactly is dating Miss Godecker?”

Dr. Leonard was very fond of the Musketeers and they all loved him. He knew they didn’t have much money and weren’t eating well, so he invited them to his home for dinners, sometimes twice a week. His influence on their lives extended far beyond the classroom. Ron even named his youngest son Frederick in his honor. The Musketeers continued their good natured assaults on each other throughout their lives, and amused themselves with concocted newsletters from the Coconino County (Arizona) Jail (temporary home to a few noted meteorite hunters), fictitious business propositions, threatening letters from the Bar T Bar ranch (which leases land around Meteor Crater) and general nonsense. Their love of meteorites and camaraderie in their college years grew into a lifelong friendship that never wavered.

But they never completely grew up and never stopped trying to one-up each other. On the way back to our motel after a long, hot and rather tense day of hunting at the Odessa crater, a day in which tempers had flared over the use of a metal detector, Ron asked Richard to stop the car so he could look at some wild flowers. Richard complied; then when Ron had wandered off he quietly started the car and slowly drove away. He parked about two hundred feet down the road and Ron took his time catching up. When he got in he asked if we had a flower book with us and began describing a particular petal pattern, completely ignoring — just like Dr. Leonard would have — Richard’s attempt to get some other response from him. But the earlier tension of the day was gone. They spent the rest of the day telling stories and laughing. Visitors to Ron’s websites may have wondered about the occasional appearance of goats, including this picture of Ron with “his dog Spot.” Many years ago he and his wife Petrea visited Oregon and drove past a field with a billy goat standing in it. They stopped the car and Ron got out to converse with the goat. Who knows what the goat said to him — he never really explained it to me — but from that moment on he was fascinated with goats. He signed his personal letters W.E.G. (William E. Goat). That led to the introduction of Goatgrams, note paper for typing phony telegrams (long before email, delivered by snail mail). He collected goats of all kinds, stuffed, carved, ceramic, everything but barbecued, or live. He referred to himself as the Old Goat and his sons as (naturally) kids. It was silliness but silliness makes life more fun. 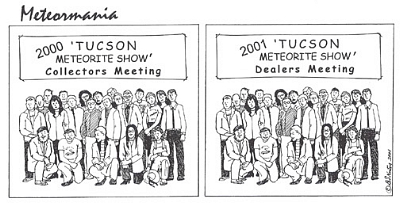 In recent years, health issues kept him from traveling to the Tucson show though he really wanted to, and he missed seeing friends and new meteorites. The membrane box business he started with his son Jim kept him very busy. But he kept up with happenings in the meteorite world and frequently contacted me with an idea for a cartoon. The last one he described to me shortly before he passed away was a variant of the famous Dogs Playing Poker painting, featuring Sonny Clary’s dog Brix (the Meteorite Hunting Dog) and a bunch of hapless humans displaying their finds at the end of a day of hunting. Sorry, Ron, I never quite managed to create that one. Ron was devoted to his family. He enjoyed life wherever he was and found humor and pleasure in the smallest details of daily existence. He taught astronomy for 44 years, even after officially retiring. His students loved him. Dr. Leonard would be proud. 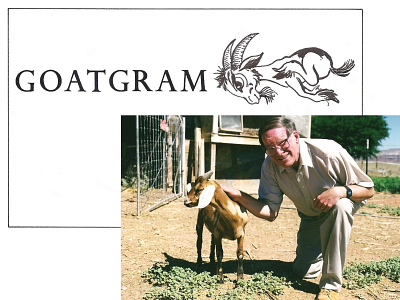 Ron Hartman and the IMCA

In his usual understated, quiet manner Ron was also a very big part of the IMCA. He and his son Jim were very active participants in the creation and development of the Association from the very beginning, Jim worked on our original website, and created our first logos, and Ron kept on pushing for things to get accomplished. I particularly remember a meeting of what was then the “Board” in Tucson in February 2004, with Ron, Jim, Ken Newton and I. Ron had decided that the Association had grown big enough by then that it was time to make it official and give it a legal standing. We were all very hesitant, but Ron would hear none of our arguments. So of course, he got his way and the lengthy process was started. Ken did a lot of research, then, Jeff Kuyken, Norbert Classen and Ken started writing the Bylaws, the Code of Ethics. The State of Nevada was chosen because it allowed us to do everything electronically. There were lots of discussions, and emails between all of us, and Ron! And by the end of September, it was finally all done, all the papers had been signed and delivered, the fees had been paid, we were “legal” and registered as a Non-Profit Professional Association in Nevada.

And I announced that I was going to the Munich Show since they no longer needed me for any proof-reading. I really thought by then that my job in the IMCA was done. They wished me “Bon Voyage” and I left. When I came back some ten days later, I found a bunch of emails congratulating me. Congratulations??? What for? Certainly not for going to Munich, I thought. Then I discovered that I was President of the IMCA. What! Me! President!! I kept looking for information and someone finally admitted privately that Ron (always persuasive!) had quietly talked everybody into electing me as soon as my back had been turned. So of course, I called him and the conversation went something like this:

Yes, I did find out, and I am still finding out, and as I told Ron so many times, it is all his fault! But I must admit that it has been an unbelievable experience, something I never dreamed I would ever do. Thank you Ron!

This article has been edited by Anne Black and Norbert Classen