There is a family of remarkably similar (and usually controversial) natural glasses, including, Saffordites (aka” Arizonaites”)Colombianites, Healdsburgites, and Philippine Amerikanites, which I term “pseudotektites”. Placed side by side with the real thing, these look very much like tektites, but they almost certainly are not. We are often approached by individuals that are convinced that they have discovered new tektites or strewnfields. Mostly, the claims can be readily dismissed, but the best-looking ones (pictured below), force us to critically review our tektite recognition criteria. 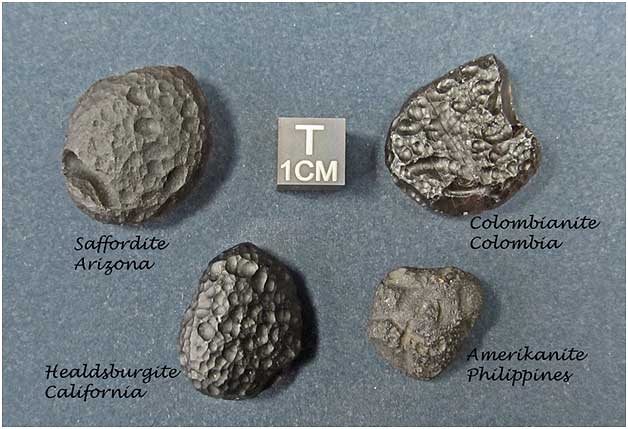 If those of us who know what tektites are should be asked to describe them to someone unfamiliar with them, I suspect all would include things like dimpled skin, aerodynamic shapes, composed of glass, black or green, not gray. There’s more, but these are prominent descriptors. However, the pseudotektites discussed in this article pose some challenges:

• Their skin ornamentation—dimpling, pitting, grooving is effectively indiscernible from that of true tektites.
• Their transmitted light color is often a smoky- lavender, not a color used in our definition.
• Tektite-like morphologies are fairly common in the pseudotektites, particularly patties, biscuits, spheroids, and occasionally, teardrops (pictured below).

Assuming that we are correct that these stones under discussion are truly not tektites (and I am quite sure of that fact), then we must devaluate the diagnostic usefulness of the most visually obvious features of a tektite: skin-ornamentation, aerodynamic morphology, and basic dark glass composition. These are not peculiar to tektites.

In searching for characteristics not requiring a laboratory that truly are (or are not) fundamental to the nature of a tektite, I have narrowed my observations to two key negative discriminants.

1) Gray transmitted light color and/or deflection of a delicately suspended magnet indicates the presence of crystalline magnetite. Tektites are given birth in a monstrous plasma fireball. It is true and is probably a direct consequence of formation, that tektite glass is of extremely high purity, devoid of volatiles, and all constituent elements are fully dissolved in the glass. There are never any primary crystallites at all.
2) Internal flow-bands or schlieren, when present, are invariably cut by the morphological surface in pseudotektites. Tektites (when unbroken) are complete primary bodies. Any internal fabric will conform with its bounding morphological surface. The teardrop-morphology Saffordite pictured below is by this criterion recognized as not being a primary aerodynamic form, but is rather an accidental erosional/corrosional similitude of a teardrop that is not complete, but is a remnant of what was once a very much larger primary (volcanic) domain.

The “morphologically-truncated banding” is a valuable recognition tool. A splashform tektite is a complete three-dimensional body, a flying blob of molten glass enclosed entirely within itself. Every viscous taffy-like internal band will honor the ultimate external bounding surface of the shape.

Consider a volcanic flow-dome complex composed all or in part of obsidian. Flow-banded domains may extend for meters or even tens of meters. Now, in your mind, let that body chaotically fracture in the accumulated trauma of deep time and let advancing fronts of hydration, devitrification, and other forms of erosion eat into these fracture faces until only a few “buttons” remain in the most central hearts of the boulders. What would they look like? My answer? Saffordites, Healsdsburgites, Colombianites, and (I think) Amerikanites.

(There is something of a scientific mystery hidden in the “Amerikanite” heading:. In my introductory photo, you will take note of an “Amerikanite” from the Philippines. H. Otley Beyer, father of Philippinites, routinely included in his specimen collecting inventories a heading entitled “Amerikanites”, and it is clear from his usage that he was referring to pebbles of terrestrial obsidian that he recognized as masquerading as Philippine tektites. Beyer, to my knowledge, never explains or defines an “Amerikanite” in print. But I am willing to bet that it is a sibling of Safforfdites, Healdsburgites, and Colombianites! The one example in our collection fits nicely on that shelf). These weirdities have a story of their own!

So what are pseudotektites if they are not tektites?

I believe these to represent the final skeletal traces of either very old obsidian or glass that was chemically unstable in its weathering environment.

All glass is geologically metastable and does hydrate, devitrify and recompose (a new word, I think, but they do not strictly decompose, but rather transform from an amorphous state into a crystalline substance, essentially the opposite of decompose, hence, “recompose”) into clays over a few tens of millions of years. Logically, the last bits of remnant glass, geological moments from obliteration and oblivion, must have a corroded and etched skeletal appearance. They truly are quite magical objects in their own right.

These are the most ancient grandfathers of their species and when they are gone their ancestral rock will be extinct. We humans have belatedly learned to care about the passing of biological species in our spaceship ecosystem, but we forget that even the mountains and rocks pass through their natural life cycles and are banished into time past.

These pseudotektites are the final survivors of their ancestral volcanic parents in the geologic Garden of Eden. As the strongest bits in the hearts of boulders, they are something of a crowning gem (—and the gemmy transparent lilac ones do indeed facet into spectacular jewels!). Hold one and marvel. It is not a tektite. It doesn’t need to be. It is a stone with its own amazing story. It is one of the final generation of its kind before ultimate extinction. A grandfather boulder-heart!

Norm Lehrman is a recently retired exploration geologist with over 45 years experience. His career involved fieldwork in over 35 countries on every continent except Antarctica. While stationed in Australia, Norm and his wife, Cookie, became interested in collecting Australites, which ultimately led to a generalized passion for tektites, impactites, meteorites and related materials. In 1999 they founded the Tektite Source business (www.TektiteSource.com) which has evolved into one of the world's premier providers of tektite and impactite specimens. Norm has retired to a ranch near Spokane, Washington, where they continue to serve tektite aficionados worldwide.
PrevUnderstanding the Early Solar System through the Analysis of Meteorites: The Process of Maximizing Data while Minimizing Sample Destruction
Micro Visions 3.00Next