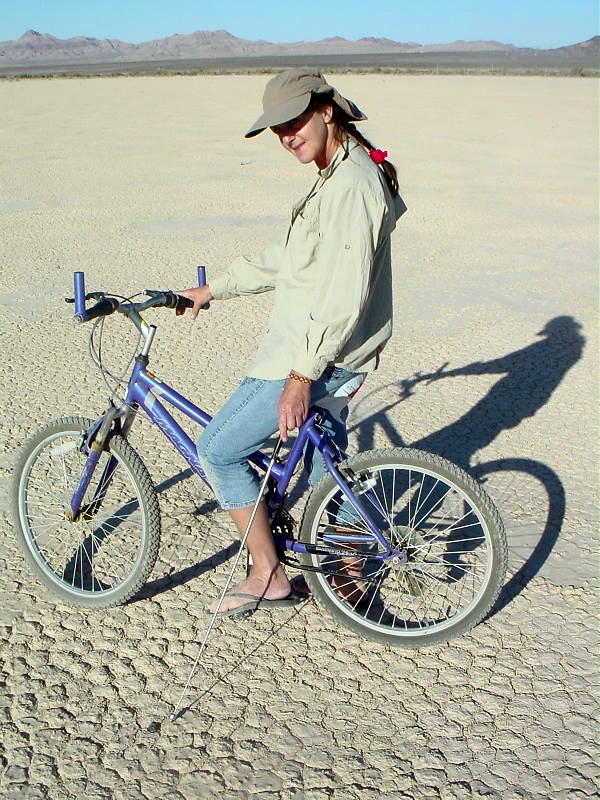 Monika Waiblinger on Roach Dry Lake in 2009 October, pointing to a 37gram
meteorite that she just found.

It’s hard to say when this story started. It’s not always easy to pinpoint
when a specific action precipitates a course of events, particularly when more
than one story dovetails and over time forms a braid of history.

If this were just a story about the meteorites found at

Roach Dry Lake in Clark County in southern Nevada, then it would be easy to
say that this story starts on 1997 December 23rd, for that was the day that
Nicholas Gessler discovered the first

Primm Meteorite. Nick and his family went on to find 104 more meteorite
fragments with a total mass of 3.383 kg. Many of these fragments could be fit
together to form

But the action that precipitated a series of recent events is easy to
pinpoint as occurring on Apr 12, 2013 7:55 PM . That is when “Dolan” Dave
Libuszowski reported in his post to the Met-List about his

Roach Dry Lake Meteorite Finds. This was well-received by the Met-List and
was considered note-worthy because that dry lake was considered “played-out”.

a reply to the Met-List, the contents of which I have transcribed below:

Yes, congratulations to David, because a RhDL find is a well-earned feather added to his cap.
And yes, I agree with Count Deiro, because I was also one of those people that “thought
there couldn’t be another specimen out there.”

But I already had that misconception dispelled right in front of my eyes by someone close to me;
that’s right, Monika Waiblinger. She had cajoled me into taking her to Roach Dry Lake,
and I even said “You know, we’re wasting our time because we’re not going to find anything”.
Of course, she wasted no time proving me wrong: It was clearly a corner fragment to what must have been a very much larger individual.
I was stunned.
I tried to explain to Moni that this was the first sizable fragment found since 2004,
but not only that, I was convinced this would physically-pair to one of
Nick Gessler’s original Primm (H5) masses, which were all found in the previous century.

I made it clear to Moni that in no way was I saying that she found something
that was missed by others in all that time. Quite the contrary. This fragment appeared
to have been recently exhumed. Up until then, it was not available to have been found.
I found this as evidence that dry-lake surfaces can be replenished by exhuming
shallow-buried meteorites. The question is, over what period of time,
or is the burial-exhumation process cycling frequently.

I shared this “replenishment” theory with other finders of Roach Dry Lake meteorites,
but most were skeptical and held to their “must-have-been-missed” theory (gradualism).
But when they returned to their old find sites/monuments/piles-of-rocks and
soon found nearby “more” meteorites (that could not have been missed),
they became ardent supporters of the “replenishment” theory.
Some of these finds have been documented. Here is a link to a 2010 find:

And much more recently, another woman (whose name I am not at liberty to divulge)
found a RhDL meteorite which I suspect is not-paired, so I am getting it classified for her: 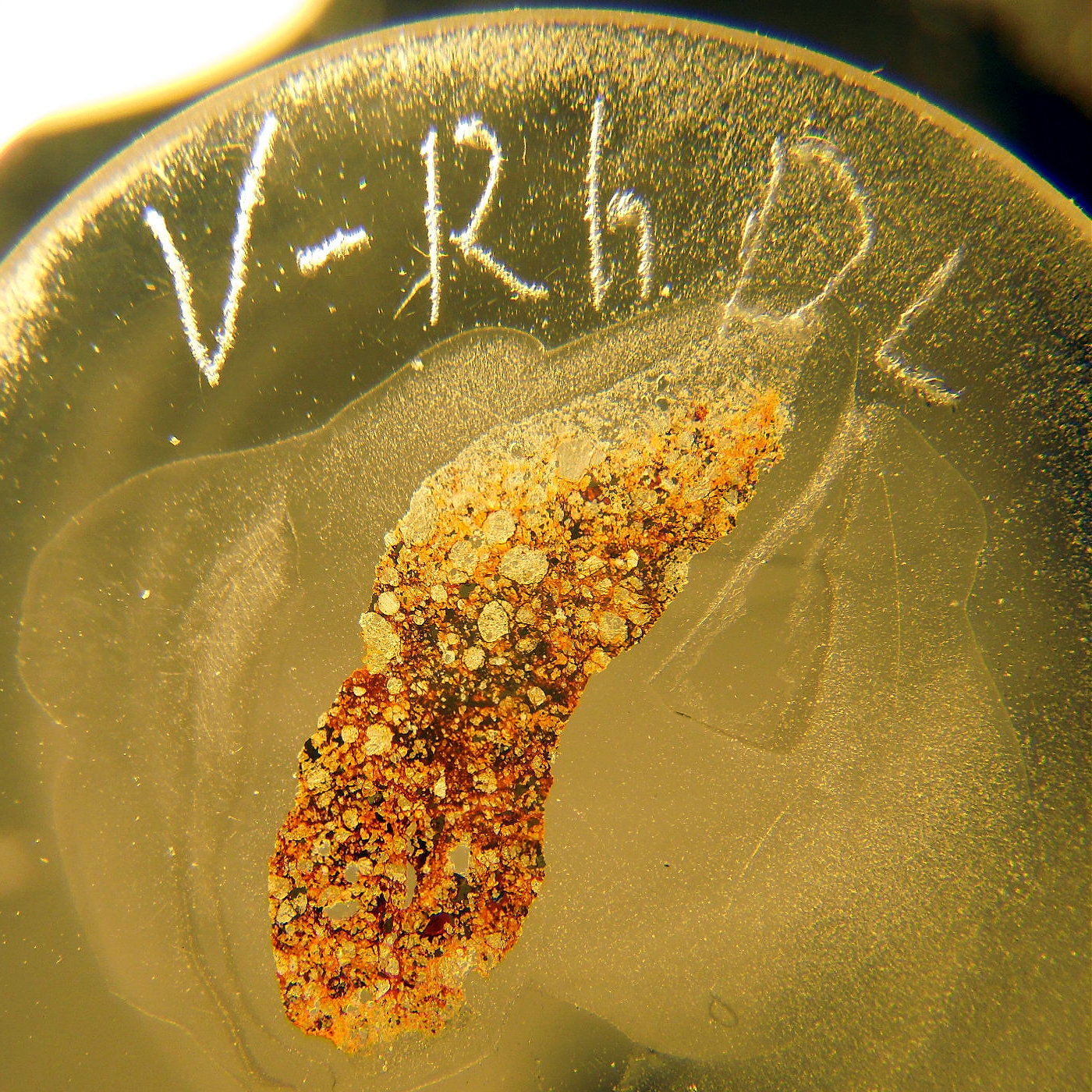 So, instead of the notion that
“hard hit areas, will only get continually more difficult to find anything”,
it may be more prudent to recognize that conditions could change overnight,
and that subsequent finds may be more a matter of timing;
being at the right place at the right time (after a fortuitous exhumation event).

So, the thrust of my post was that the general consensus about Roach Dry Lake
was that, after more than 200 chondritic fragments had been found there, it been
cleaned-out. On the other hand, a small faction held-out that the lake-bed had
taken a temporary set-back, the consequence of a severe winter storm in 2004-05,
when an influx of sediment had wiped-out the effects of many prior years of
deflation. This resulted in more than 5 years of nothing notable being found on
that lake-bed, that is until Moni made her find in late 2009. This portend the
beginning of a phase of good conditions, conducive to recovering more meteorite
fragments on that lake-bed surface, as was bourn-out by the recovery of RhDL 113
and the more recent finds by “Dolan” Dave and Kim Cathcart.

A week later after Dave’s post on the Met-List, another “Primm” thread was
started, this time by Paul Gessler (Nick Gessler’s son). For the reader’s
convenience, I’ve transcribed Paul’s post below:

To all You hunters who have searched Primm / Roach Dry lake:

Please help me to rebuild one of my favourite meteorite finds.
This 242 g individual was found back in 1997 and was reconstructed
from 3 pieces and glued back together. It is still missing a small
8 gram wedge shaped piece that hopefully can be reunited with the main mass???
Just want all of you who have hunted Roach D.L. to take a look at this video and
see if just maybe you have the piece I am looking for. It would be Incredible to
COMPLETE this meteorite’s saga. If found, I would be happy to substitute for a
larger Primm piece from our collection…and some detailed info
on a Nevada strewn field that has yielded
some really Amazing finds.
Let me know. thanks.

Would also be interested in the locations and mass of additional finds
regardless of matching my piece so that I can get an idea of what we missed.
I want this attempt at unification to get out to everyone so
please forward the video to anyone you know
who has searched this location or is even slightly interested.

Paul’s request prompted me to contact him, and offer to help him with his
ongoing effort at “reconstructing” his (and his dad’s) Primm meteorites.

I explained to him that although Moni’s fragment was too large for the stone in
the video, the fact that it was a large “corner-piece” may help to unite other
fragments to reconstruct another original stone. 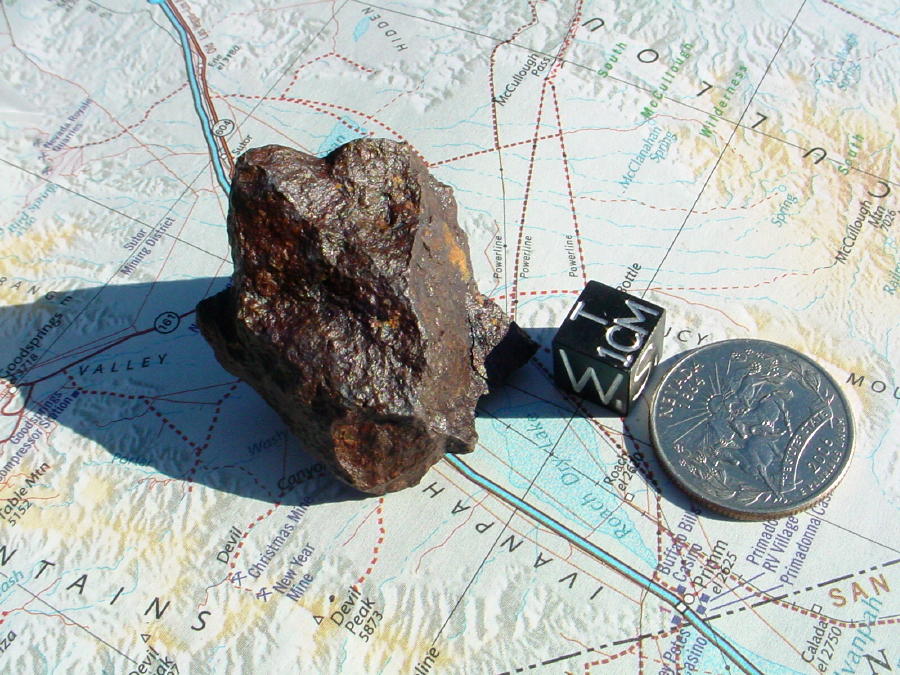 image taken on 2009 October 10. I explained to Paul that (in his video) his use of a clay replica for the
missing piece in his rebuilt stone gave me an idea. It reminded me of when the
LA County Museum of Natural History had the Getty Museum Conservancy fabricate 2
plastic-cast replicas of my LA 002 mars-rock. I had watched how they made the
mold and cast the replica, and it was quite impressive how good of a job they
painted the stone. (But then, these were the experts that repaired
museum-pieces.) 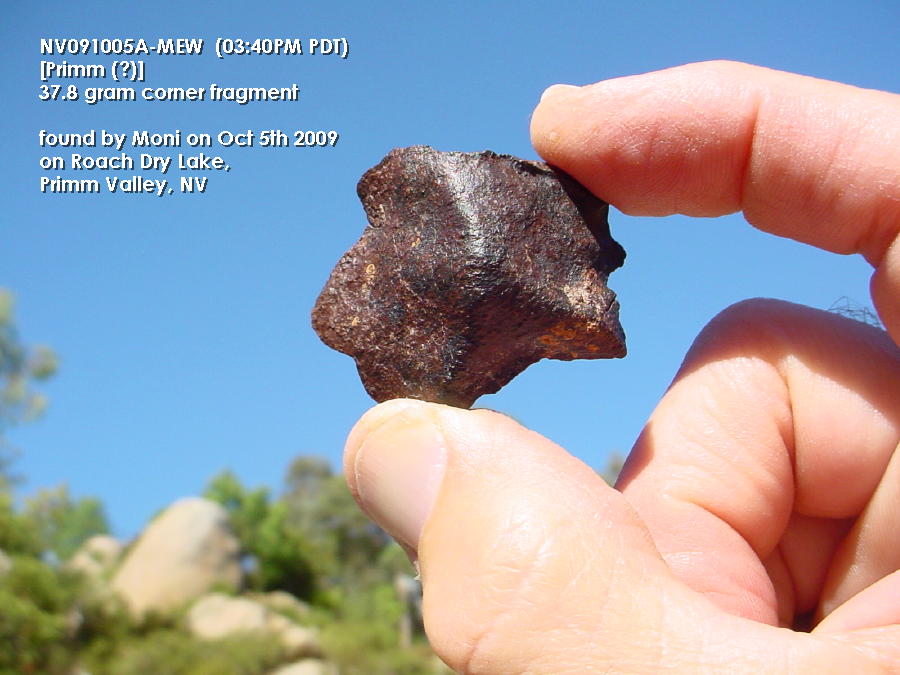 image taken on 2009 October 10. I told Paul that I had recently done something similar for another
meteorite-hunter’s puzzle-find, and I would like to try it, again, but with
Moni’s corner-piece.

I started my process by showing some images of Moni’s find taken by me from back
in 2009. 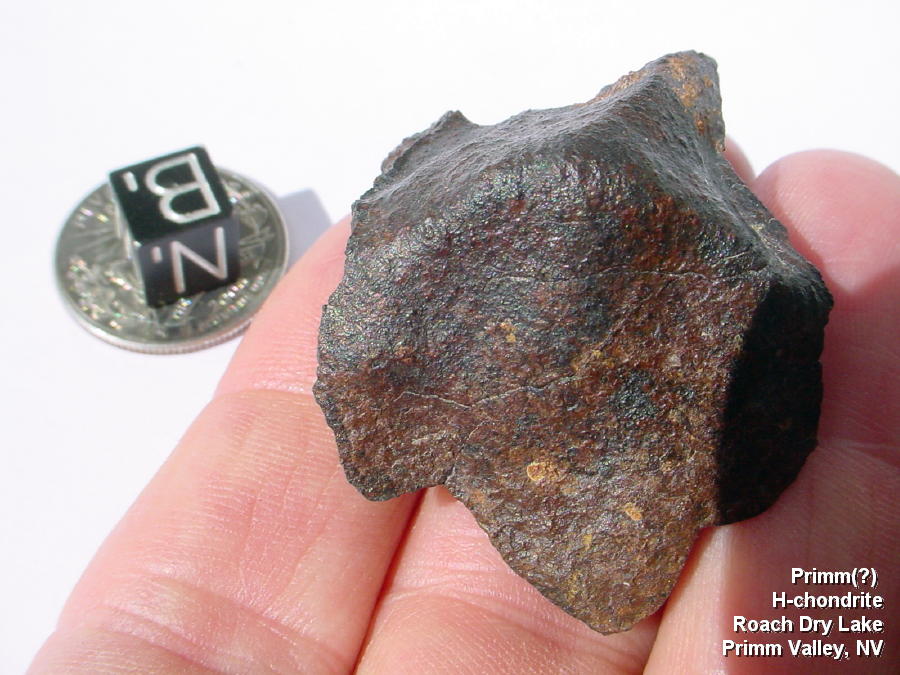 image taken on 2013 April 26. I took some more images to make sure I had a good set of “Before” pictures.
The side of the fragment that was face-down in the lake-bed silt was the
exterior-side, so the relict fusion-crust was somewhat better preserved. 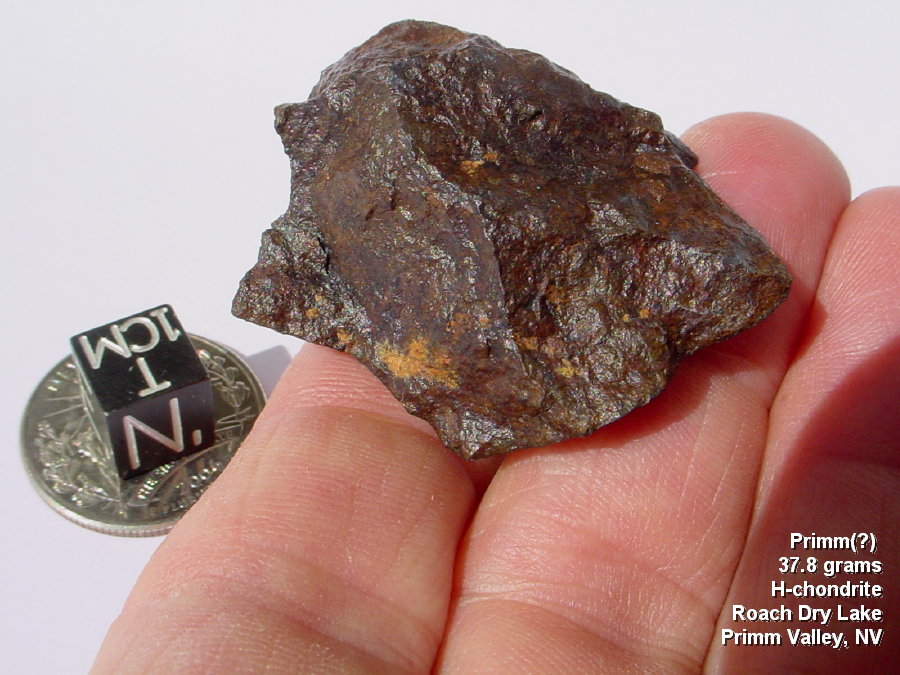 image taken on 2013 April 26. The “hackly-side” was the side facing-up and was exposed to the elements, but
it will be the side that must interlock with the other “puzzle-pieces”. 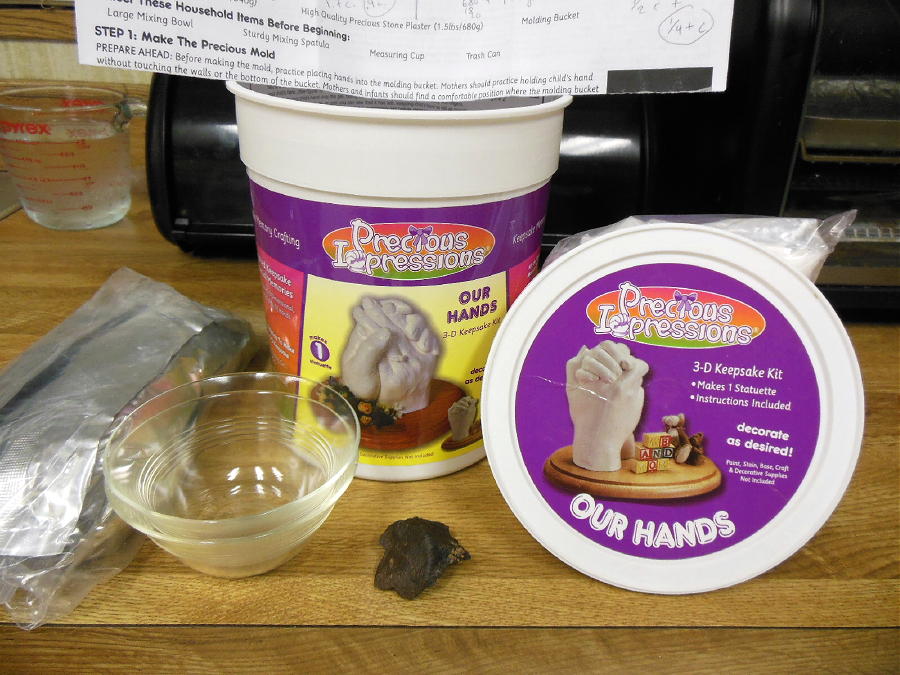 image taken on 2013 April 27. The plan was to fabricate a silicon-resin mold and to cast a plaster replica.
Moni chose a product she was familiar with from a local hobby shop. The
instructions were quite adequate, but I modified them to incorporate a trick
that I learned at the Getty Museum. I would make a two-part mold. A bottom part,
and a top part. 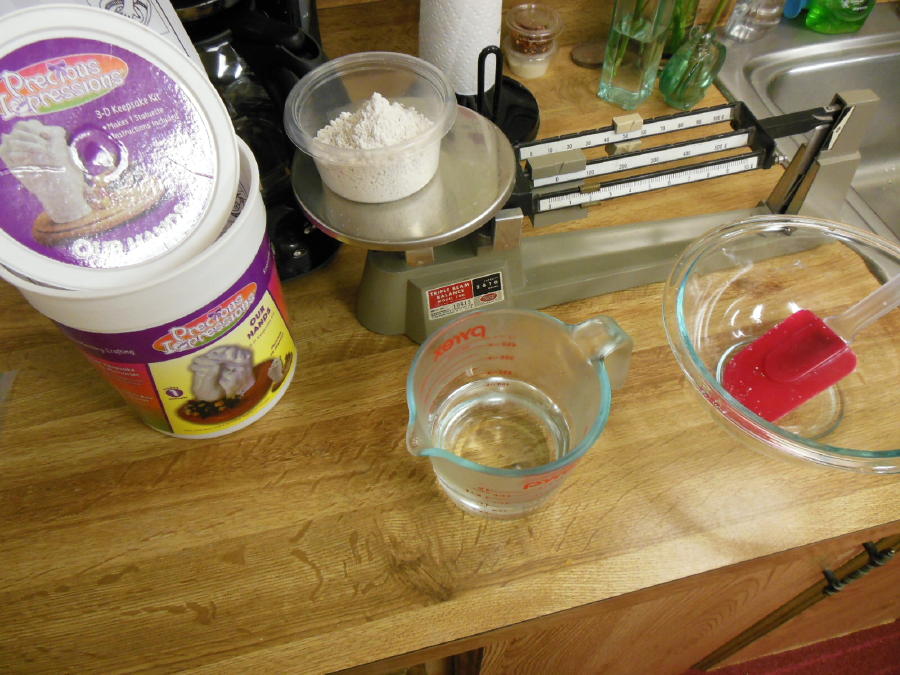 Quickly mix in the cold water. 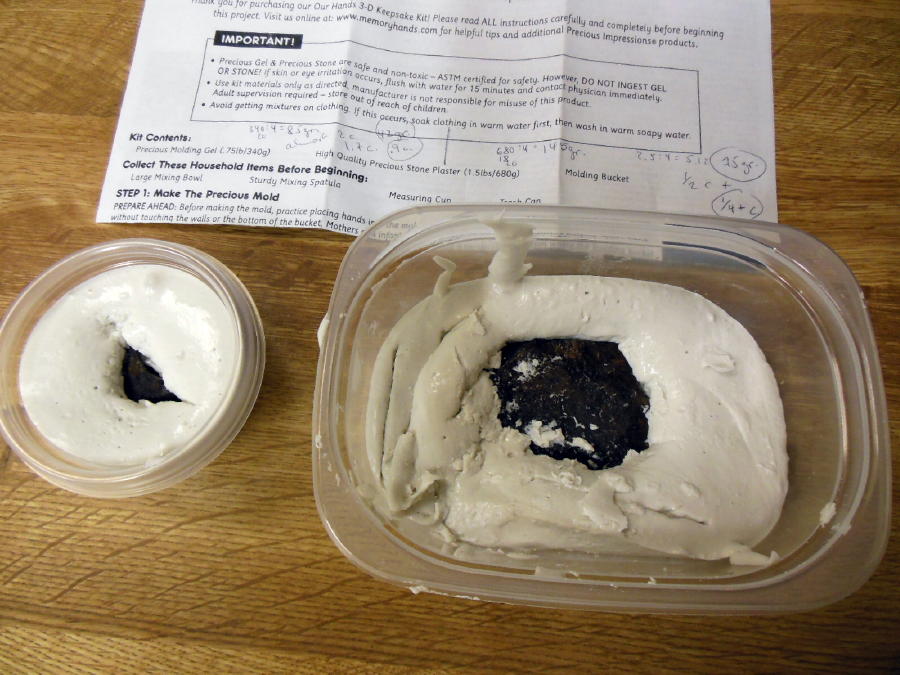 Pour the 1st layer of the silicon-resin into a proper-sized plastic container.

Immediately place the meteorite into this 1st layer of silicon.

The Primm-piece is on the left-side. An unrelated meteorite is in the mold to
the right.

Unfortunately, I took too long to get the meteorite into the mold on the right.

Luckily, the resin is very forgiving and the mold on the right still worked.

Now you are ready to pour the second layer of silicon. 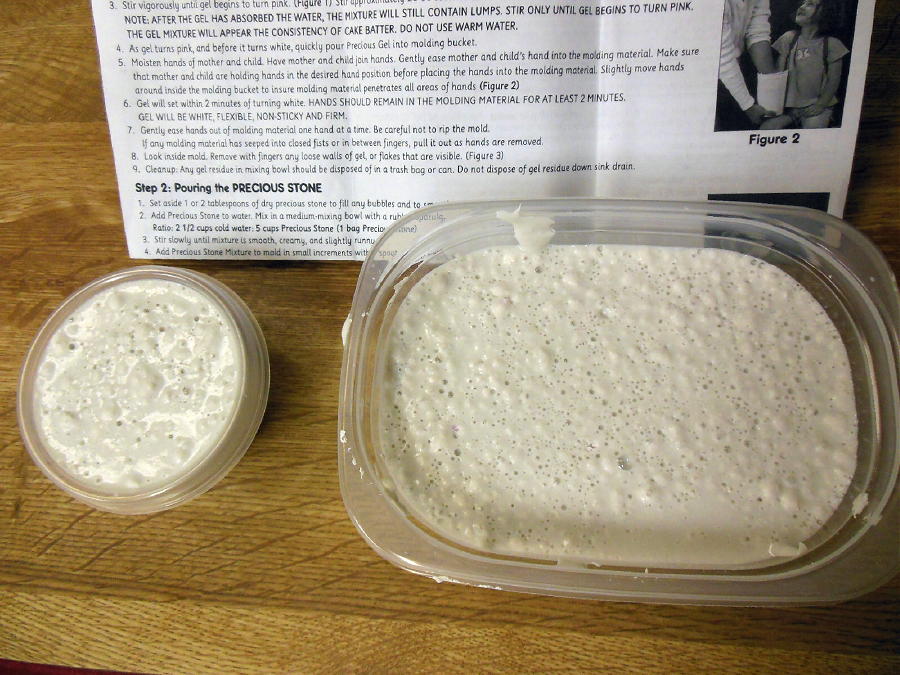 This is how the mold looks (in the plastic bowl) when it is down. 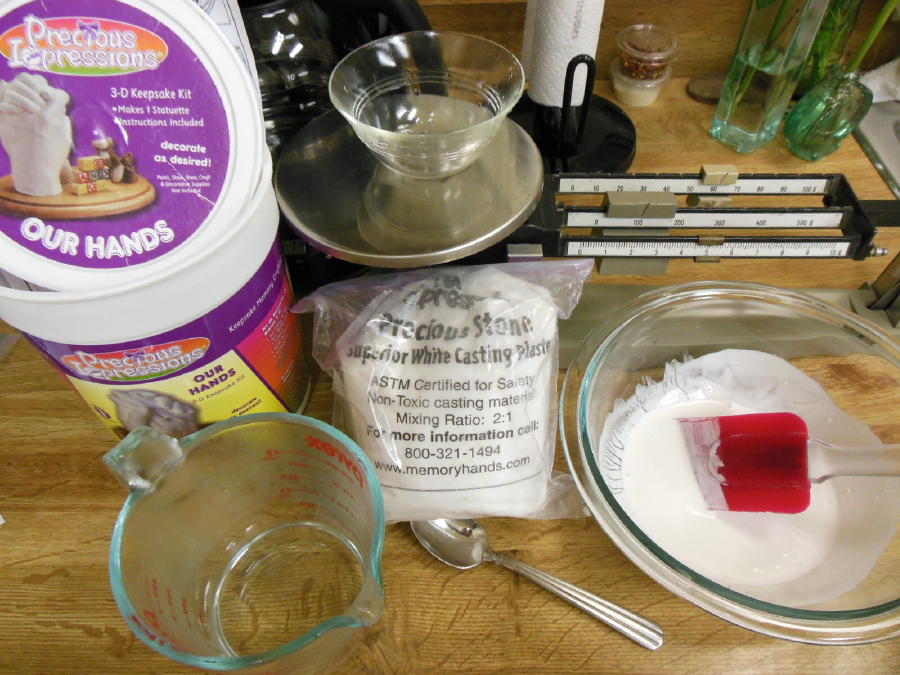 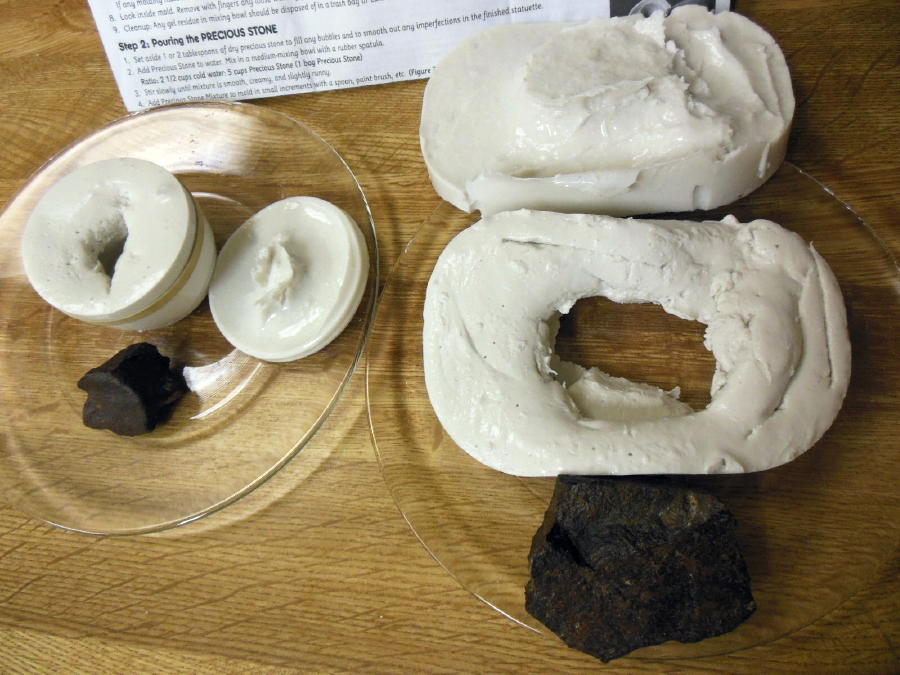 It doesn’t take long for the mold to harden. Read the instructions.

Remove the meteorite from the mold. Now you are ready to pour the plaster. 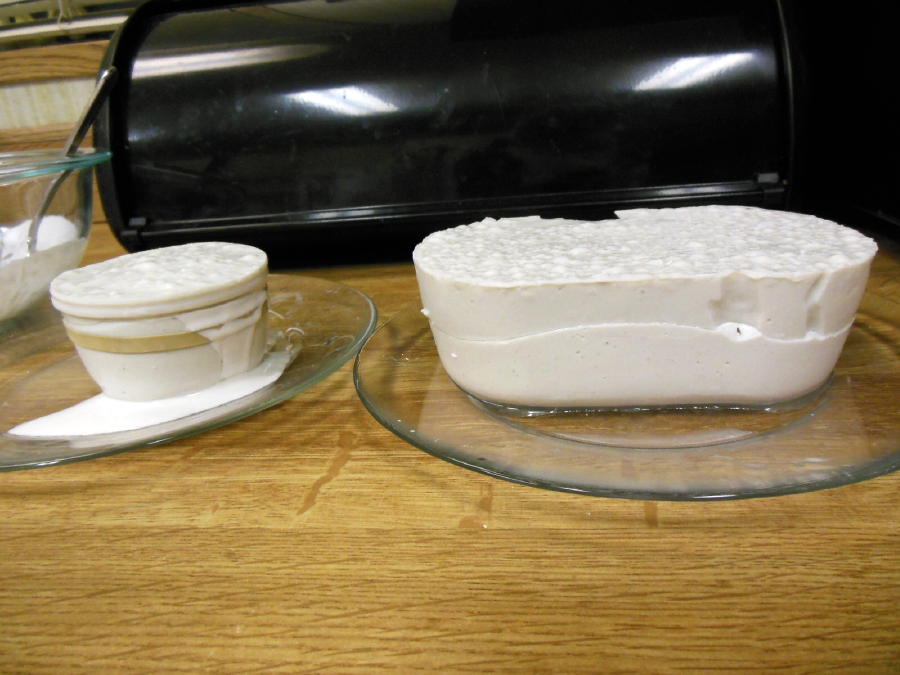 Pour the plaster into the mold.

It’s OK to over-fill, because you don’t want an air-bubble to form when you cap
the top-layer.

Allow cast to set while inside the mold overnight. 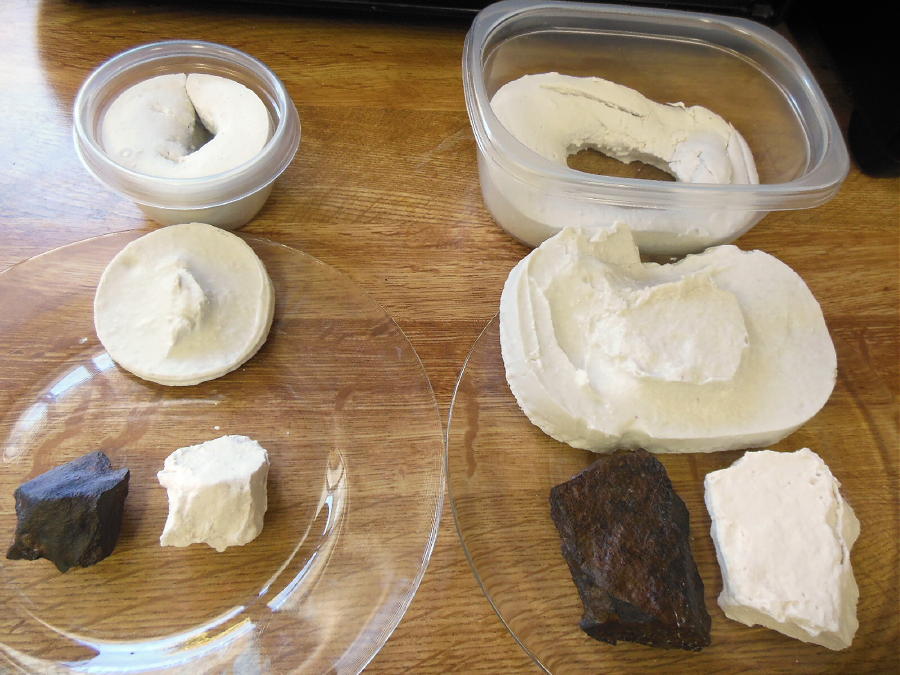 The mold is easy to open, but remove the cast carefully. 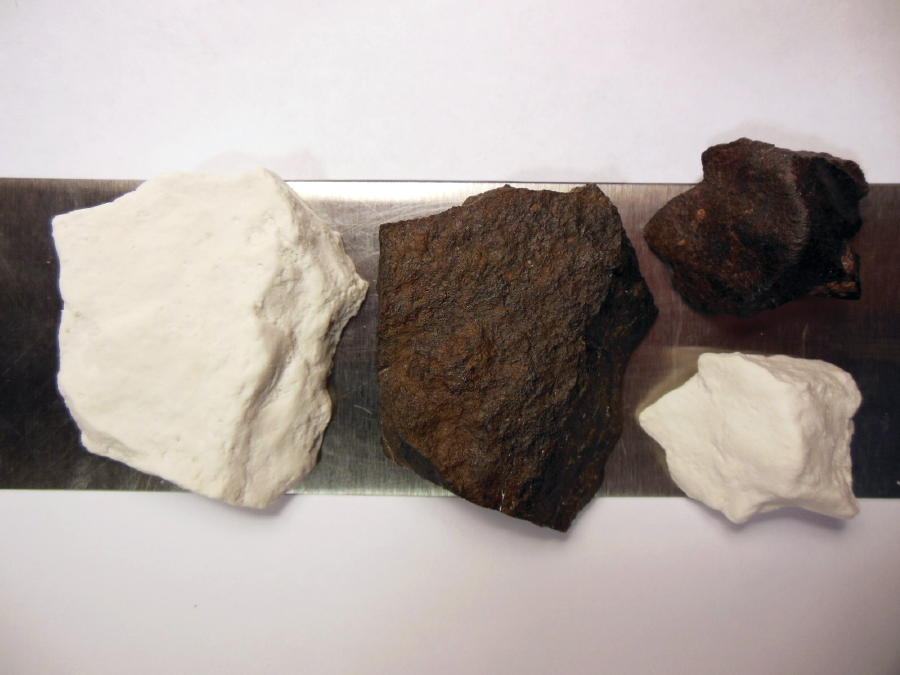 You will probably have to trim away any excess plaster. 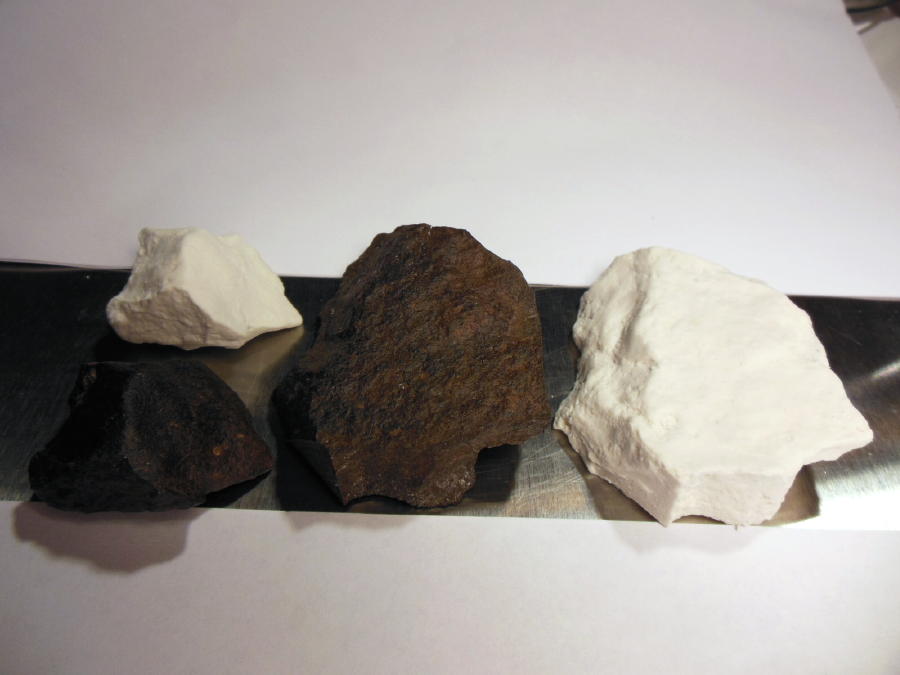 Allow the plaster cast to thoroughly dry before applying paint. Paint is applied in layers. 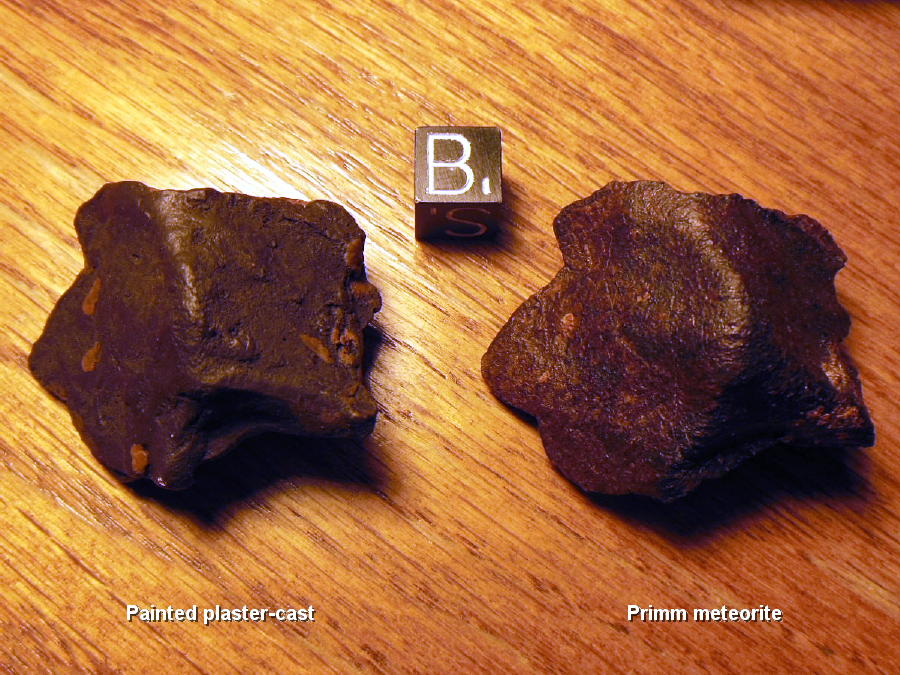 image taken on 2013 April 30. As of the writing of this article, Paul Gessler hasn’t received the
resin-cast replica, yet. It was mailed first to his father, Nick, who is on
staff at Duke University. Nick will also have to travel back to Los Angeles in
order to complete the check-out of his specimens to see if the replica will
interlock with any of his puzzle-pieces, before forwarding the replica to his
son, Paul, in Canada.

The results of this process will be presented in a second installment of “Bob’s
Findings” – Primm and the other Roach Dry Lake Meteorites – Part 2 ! 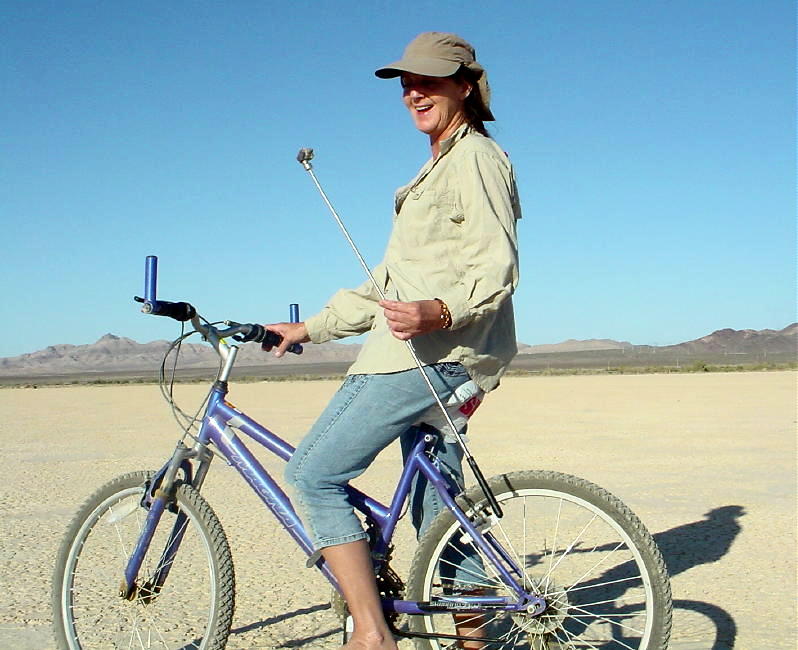 Moni pulls another meteorite out of thin-air!

The Wikipedia: entry for Roach, Nevada

The Wikipedia: entry for Primm

From a list of search results on Google for “Roach Dry Lake” – which shows the
location of “Roach Siding” for which Roach Dry Lake was later named.

104 meteorite fragments weighing a total of 3.383 kg were recovered by
Nicholas Gessler after an extensive search of Roach Dry Lake …http://gessler.bol.ucla.edu/Primm.htm

Published on Apr 19, 2013 – Paul Gessler’s video of his Primm (H5)meteorite
fragments which he reconstucted into a whole stone weighing a total of 283g
– MINUS an ~8 gram piece which he is requesting help in getting it
found/located. …http://www.youtube.com/watch?v=PW54tdOXWiE

Published on Apr 20, 2013 – “Found this 6.3 gram meteorite piece while
hunting Roach Dry Lake Bed, near Primm, NV. on 4-13-13.” – “Dolan” Dave’s
video response to Paul Gessler’s video of his Primm (H5) meteorite, which
Paul reconstructed into a whole stone weighing a total of 242g from
fragments that Paul found 15 years ago at Roach Dry Lake. …http://www.youtube.com/watch?v=N8JoD0YAC_8

Bob is a retired aerospace engineer living in Southern California, and has been recovering meteorites from the Southwest U.S. Deserts since 1995.
PrevNWA 4540 CO3.5
Meteorite Vacation 2012 Part ThreeNext